From the company’s website: “Originally established in 1856 in Paris, Kentucky, Chicken Cock quickly became one of the larger bourbon brands of the 19th century. Forced to move production to Canada when Prohibition started, Chicken Cock was smuggled across the border in tin cans, where it rose to fame as a popular serve at some of the era’s most famous speakeasies, including the legendary Cotton Club in Harlem. At the Cotton Club, when patrons ordered a “Chicken Cock,” waiters would present the tin can tableside and ceremoniously open it to reveal the bottle of Chicken Cock Whiskey inside. Duke Ellington writes about Chicken Cock in his memoirs, referring to the “brand that was served in a tin can.” At a rumored $15 per bottle Chicken Cock wasn’t for the light of pocket, but it was a small price to pay to secure a prime table near some of the greatest musicians of the era. After prohibition, multiple attempts were made to bring “the famous old brand” back to its former glory, but shifting drinking habits caused it, along with many significant American Whiskey brands of the 19th and early 20th centuries, to disappear.”

‍‍The Chicken Cock brand was resurrected by entrepreneur Matti Anttila beginning in 2011, with the first modern day release being a 30 barrel release of 8-year-old bourbon in 2017. The release honored the brand’s 160th Anniversary.

Vanilla and caramel integrate with light oak and graham cracker. Leather creeps in on the backend, along with a healthy dose of spice that’s punctuated by a touch of dry oak. It’s traditional and pleasant, giving way to a quintessential bourbon aroma that’s easy to like.

Caramel apple against prominent baking spices form an immediate base of flavors. Graham cracker follows accompanied by a touch of dry toasted oak. Not at all punchy, but not overtly smooth and creamy either, the sweet-spice contrast is invigorating. Overall the sip is quite satisfying and approachable, making for a traditionally-inspired, enjoyable experience.

Starting with a healthy dose of spice, the finish weaves back through the traditional caramel and vanilla flavors. A hint of leather mingles in and then tapers off. Spice further develops on the backend, making for a medium to long finish. It’s pleasing overall, and nicely represents the aroma and sip that preceded it.

Since Chicken Cock’s relaunch in 2017, the brand has put forth a variety of products that have been sourced from various distilleries, including numerous barrel finish releases. The flagship Chicken Cock Straight Bourbon has changed sources over the years, and as of 2022 is made of bourbon distilled exclusively at Bardstown Bourbon Company in Kentucky via their collaborative distilling program. According to the company, Chicken Cock Master Distiller Gregg Snyder supervises Bardstown Bourbon Company throughout the entire process, working collaboratively with Master Distiller Steve Nally and his team.

Chicken Cock utilizes their own 70% corn, 21% rye, 9% malted barley mashbill, which is just one of at least 50 unique mashbills distilled by Bardstown Bourbon Company. What permeates throughout every bottle of whiskey I’ve tasted that’s been distilled by Bardstown Bourbon Company is quality. In Chicken Cock Straight Bourbon’s case, the quality is certainly there. At the core though, it’s a very traditional bourbon that echoes similar qualities to other flagship Kentucky distillery brands such as Wild Turkey 101, 1792 Small Batch, and Elijah Craig Small Batch. Chicken Cock Straight Bourbon highlights the fact that Bardstown Bourbon Company has achieved such a high quality level of distilling in such a short time. Moreover, blending matters even if the base distillate is high quality, and Snyder succeeds in creating a well-rounded, traditional Kentucky style bourbon that doesn’t quite taste like the other products coming from Kentucky majors, even if it does echo similar traits. Put simply, it’s a modern yet traditional Kentucky-style bourbon, through and through.

Coming in around 4 years old at 90 proof, Chicken Cock Straight Bourbon is certainly asking a premium at $60. Its eye-catching, honeycomb texture bottle design screams premium, and for many that’s all it will take to command a purchase. Moreover, other releases from the brand that command as much as $500 MSRP, and are showcased in a similar bottle design, help elevate the consumers’ perception of value.

But many of the products at higher price points include more complex blends. As a result, the fact remains that Chicken Cock Straight Bourbon is just highly priced for what it is. This is especially notable when comparing it to previously mentioned brands such as Wild Turkey 101 ($25), 1792 Small Batch ($25), and Elijah Craig Small Batch ($26). Chicken Cock’s high price is even more notable when compared to more premium traditionally-inspired bottles such as Russell’s Reserve 10 Year ($38), Knob Creek 12 Year ($60), and Knob Creek Small Batch 9 Year ($35). Chicken Cock is a quality product, but it’s just priced more than you need to pay for similar quality.

Originating in 1856 and then brought back to life this past decade, Chicken Cock Straight Bourbon is a quintessential, high-quality Kentucky bourbon offered at a premium price point.

Watching the Chicken Cock brand evolve over the past few years has been interesting. From their eye-catching 160th anniversary release (inspired by a historical bottle design), to their collaboration with Bardstown Bourbon Company, Chicken Cock has continued to evolve and strive to justify their premium position in the marketplace. Although at $60 it’s priced more than you need to pay for a similar experience. In the end, Chicken Cock Straight Bourbon is exactly what it should be - a satisfying, traditional-style bourbon that’s intended to appeal to a wide audience and not turn anyone off from the brand.

Editor's Note: This review was updated on 11/28/2022 to clarify the nature of the collaborative distilling process Chicken Cock has with Bardstown Bourbon Company.

Buy Chicken Cock Kentucky Straight Bourbon at Frootbat
‍The sample used for this review was provided to us at no cost courtesy its respective company. We thank them for allowing us to review it with no strings attached.
360 video 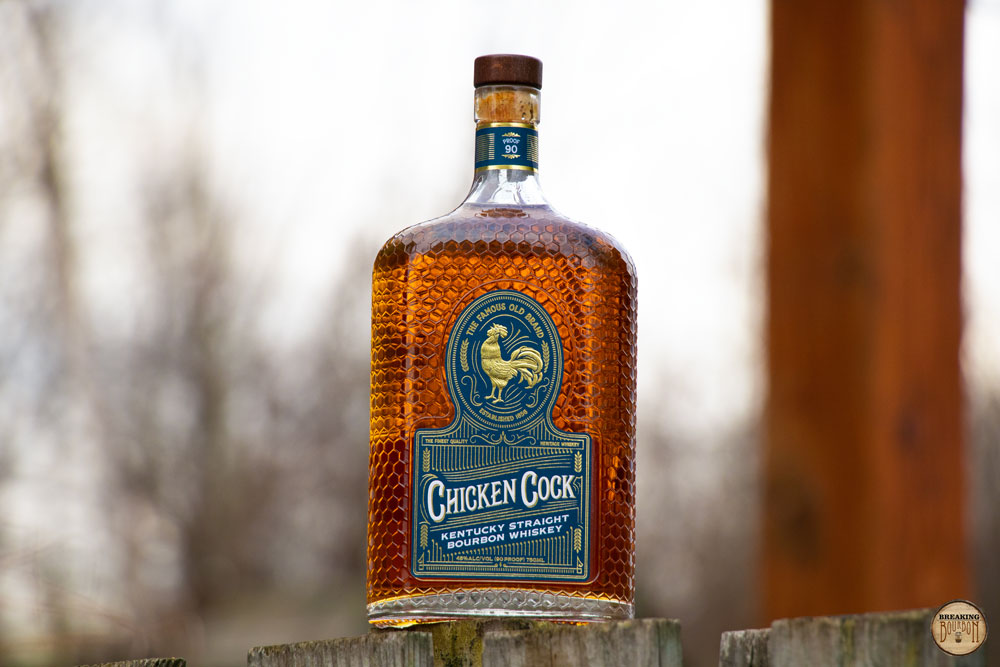 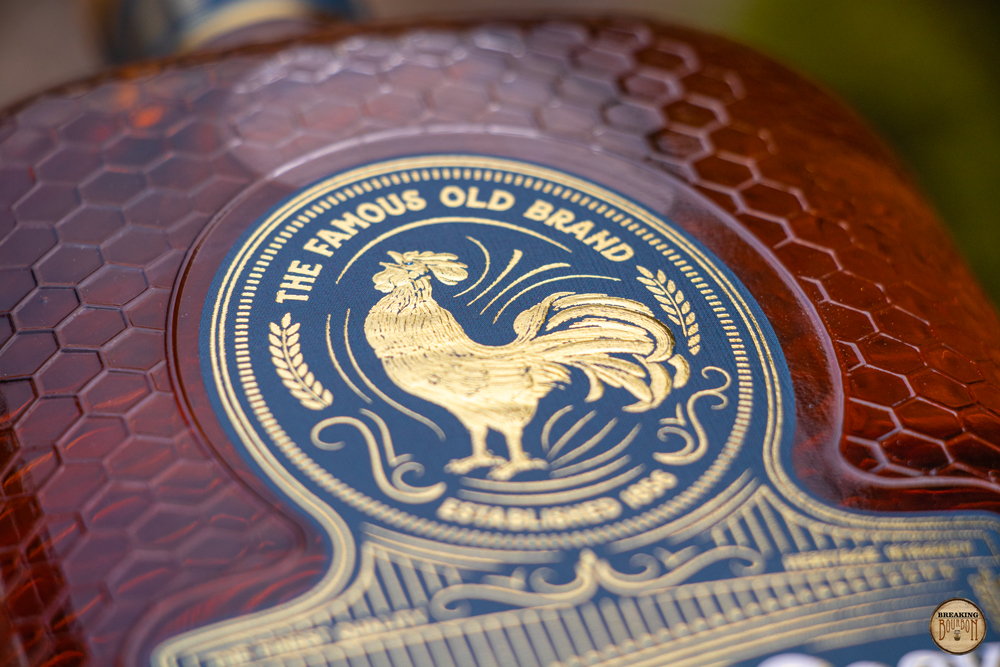 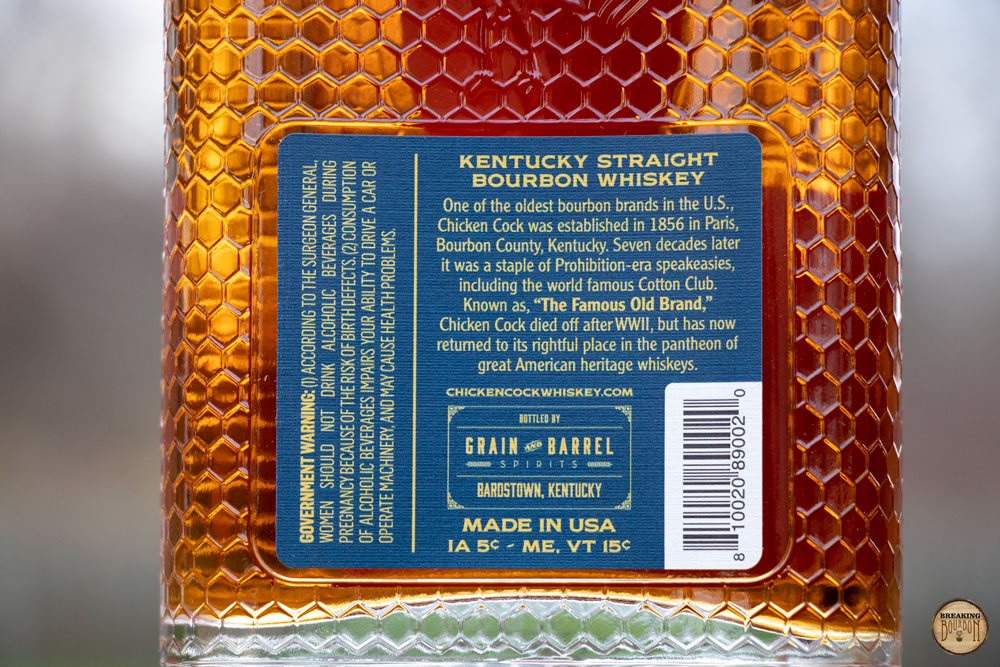