From the company’s website: “Originally established in 1856 in Paris, Kentucky, Chicken Cock quickly became one of the larger bourbon brands of the 19th century. Forced to move production to Canada when Prohibition started, Chicken Cock was smuggled across the border in tin cans, where it rose to fame as a popular serve at some of the era’s most famous speakeasies, including the legendary Cotton Club in Harlem. At the Cotton Club, when patrons ordered a “Chicken Cock,” waiters would present the tin can tableside and ceremoniously open it to reveal the bottle of Chicken Cock Whiskey inside. Duke Ellington writes about Chicken Cock in his memoirs, referring to the “brand that was served in a tin can.” At a rumored $15 per bottle Chicken Cock wasn’t for the light of pocket, but it was a small price to pay to secure a prime table near some of the greatest musicians of the era. After prohibition, multiple attempts were made to bring “the famous old brand” back to its former glory, but shifting drinking habits caused it, along with many significant American Whiskey brands of the 19th and early 20th centuries, to disappear..

For this limited release, 30 barrels will be released in total equating to approximately 7,200 bottles (an estimated 240 bottles per barrel). They will only be available to purchase online via the company’s website.

The bourbon in review is from barrel number 1, bottle number 10.

The aroma is basic, or common to say the least. Vanilla, caramel, a bit of oak, and a trace of ethanol comprise the nose. It’s a pleasant, inviting array of scents, but not at all distinguishing.

Light on entry, the bourbon allows you to hold it in your mouth for quite some time without experiencing an overwhelming burn. As evidenced by the nose, vanilla, oak, and caramel are present and mingle nicely together. While the mouthfeel does little to enhance the experience, it doesn’t detract from it either, delivering the flavors in a straightforward way. It’s an enjoyable flavor combination that’s impeccably balanced, albeit a little underwhelming.

Peppery spice kicks in, giving way to charred oak and intensely sweet caramel. It lingers for a while, with the spice coming back into play again after the caramel and charred oak taper off. There’s a trace of seasoned oak at the end, which enhances the experience as it draws to a close. Overall the finish is really well done, and easily the highlight of the sip.

With age statements dropping, it’s nice to see a new release with an age statement. That said, it’s a limited release, and age statements still remain fairly common in that realm. The bourbon’s other traits - mashbill, source, and flavor profile, aren’t particularly unusual in any way. Fortunately it’s released as a single barrel, so there will be some variation by barrel and hopefully some with flavor profiles that are a little more unique tasting than others.

While it has no impact on the whiskey itself, the history of the Chicken Cock brand is intriguing. The bottle design is also reminiscent of the old prescription whiskey bottle design, and it’s easily one of the best looking bottles I’ve ever seen. But these characteristics are only surface deep, and ultimately the bourbon inside tastes good, but leaves little lasting impression on its drinker.

Chicken Cock 160th Anniversary is an enjoyable bourbon. It’s a limited release. It’s a throwback to a storied brand. It has an 8 year age statement. It’s just not worth $100.

There’s no doubt the cost of sourcing bourbon has skyrocketed and the market is willing to pay a premium, but that doesn’t necessarily mean a bourbon’s price tag is in line with its value. While it’s released in a beautiful bottle and easily drinkable, it’s no better than many bourbons that can be found for less than $50 on the shelf today, some even less than $30. Being a limited release adds some prestige, and if the brand’s popularity is successfully revitalized with this reboot there’s no doubt this first edition will be worth its weight in gold. But that’s not how we rate our value section, and even though the whiskey inside the bottle is good, it’s not worth a Benjamin, plain and simple.

Chicken Cock 160th Anniversary is a slightly above average bourbon packaged in a beautiful bottle that inspires an exploration into the brand’s history.

A part of me feels this review comes off too negative, and maybe it’s because of the price. $100 plus shipping is a lot, and I couldn’t take a sip of this without having that number pop into my head. It’s like trying to think about not scratching an itch...now all you can do is scratch it! The same thing was happening to me with this bourbon’s price tag. At such a premium, I was anticipating, and expecting, a lot more. It is an above average bourbon, but unfortunately the price casts a shadow on what’s inside the bottle.

Despite being a reboot, the storied brand inspired unexpected interest. I couldn’t help digging through Google searches reading everything I could find about the history of Chicken Cock...and maybe chuckling a little every time I thought about that name. My wife certainly wasn’t shy about laughing every time I went out of my way to announce that I was having a pour. But it really inspired exploration into the times of prohibition and the brand. History suddenly became interesting.

And then there’s that bottle. It really is a thing of beauty and now that it’s empty (we typically split our media sample bottles three ways) I feel almost compelled to do something with it and make it a centerpiece somewhere in my house. I think the whiskey will sell based on the bottle alone, but I really hope this review at least prepares buyers for a decent but not-so-memorable bourbon inside. While the bourbon is good, the juice just isn’t worth the squeeze. It just doesn’t have enough intrigue to justify the price. I really would have liked to see this at $50 a bottle, and I hope the next limited release offered by the brand is more in line with my price expectation.

The sample used for this review was provided at no cost courtesy of Chicken Cock Whiskey. We thank them for allowing us to review it with no strings attached.

Buy Chicken Cock 160th Anniversary at Frootbat
‍The sample used for this review was provided to us at no cost courtesy its respective company. We thank them for allowing us to review it with no strings attached.
360 video 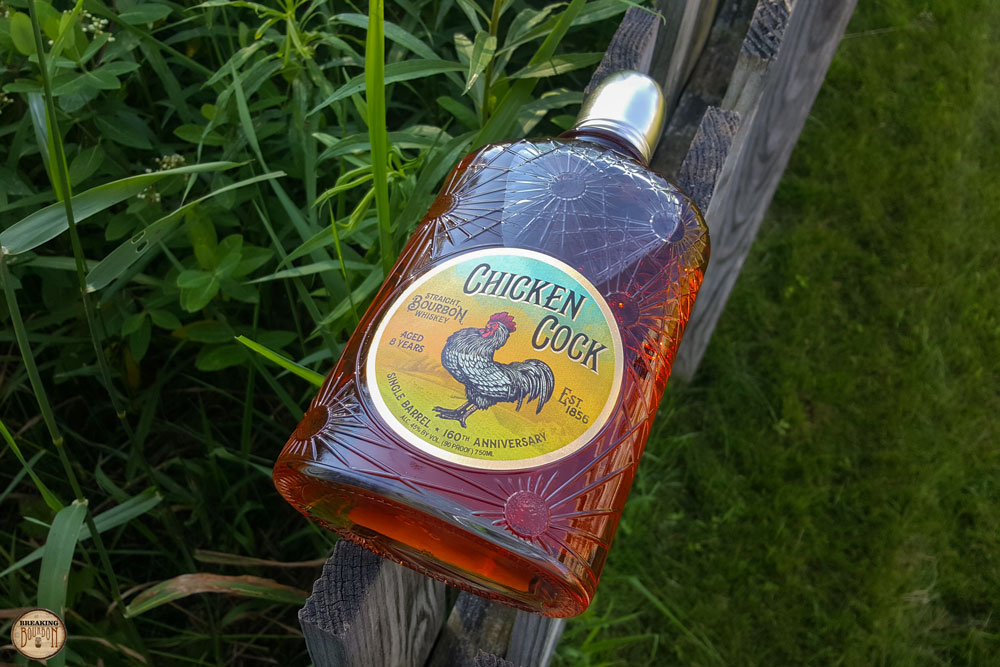 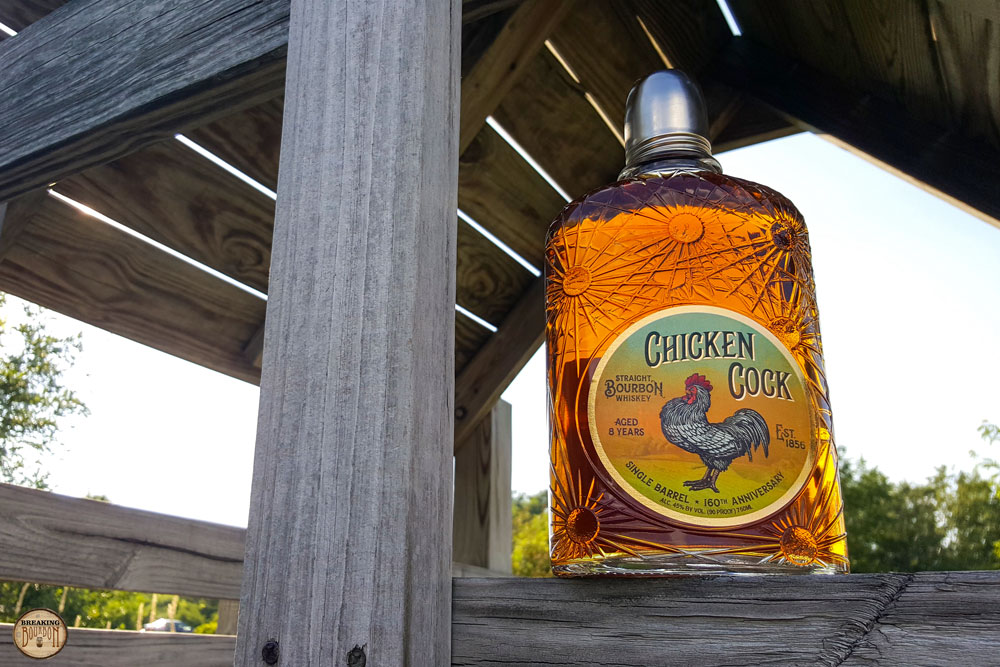 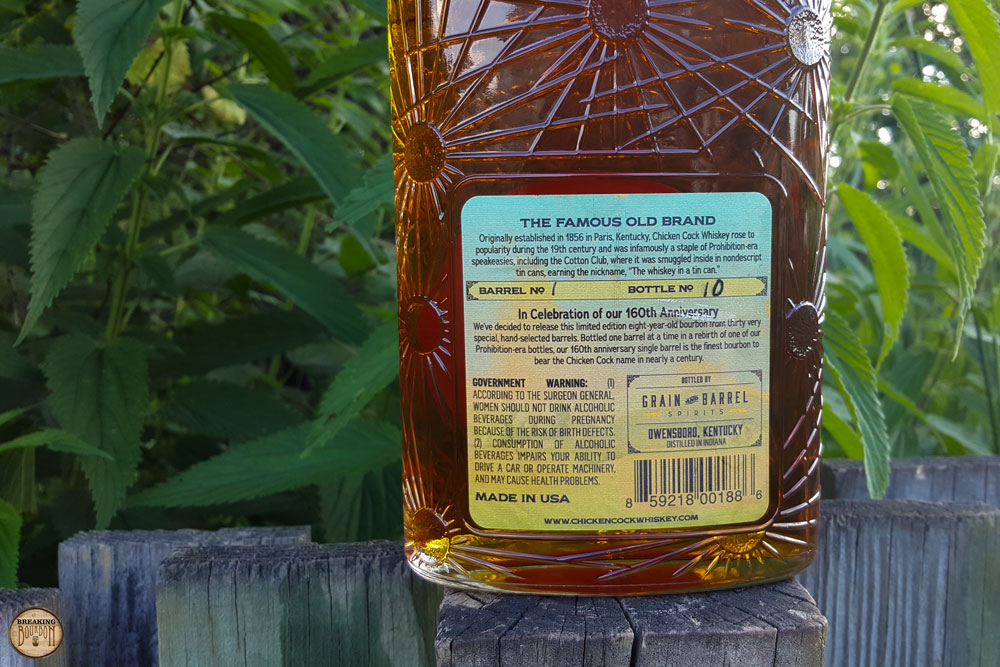