Age: NAS (At least four years based on bottled in bond regulations)

Jack Daniel’s new Bonded Tennessee Whiskey and Triple Mash Blended Straight Whiskey represent the first two permanent expressions in the brand’s new Bonded Series. According to the company’s press release, “Each expression is distilled in Lynchburg, Tennessee, in the same distilling season, aged to the stipulations of the Bottled in Bond Act, then blended and bottled at 100 proof.” Jack Daniel’s Bonded is the same mashbill as their standard Old No. 7 Tennessee Whiskey, however according to the  company barrels used for Bonded “are hand-selected for their characteristics of deeper color, flavor, and aroma, which deliver a darker, richer, and more oak-forward character.”

‍‍‍‍Both new expressions will be bottled in 700mL bottles, which deviates from the U.S. standard of 750mL bottles and instead aligns to the more international standard of 70cl bottles.

‍‍While not officially labeled bourbon, most of Jack Daniel’s whiskeys meet the criteria required to be called a bourbon. After distillation, Jack Daniel’s Bonded Tennessee Whiskey undergoes what is referred to as the ‘Lincoln County Process.’ Jack Daniel’s allows its whiskey to drip for six days in 10-foot vats, passing through charcoal that was made by burning maple wood that had been impregnated with 140 proof Jack Daniel’s whiskey, before being put in new charred oak barrels and aged for at least 4 years.

The aroma explodes from the glass. Sweet caramel, vanilla, and the quintessential Jack Daniel’s banana scent fill the air with rich intensity. Inhaling brings forth maple sugar candy and a touch of seasoned oak. It’s a wonderfully rich aroma, and one that does extremely well to set up the sip that follows. The nose is so effective at foreshadowing the sip that if you aren’t invited in by the aroma, this whiskey isn’t for you.

Intense maple sugar candy meets a mixture of caramel, toasted marshmallow, and burnt oak at the onset. Banana rushes in, but is fleeting against the more potent sugary mix. Erring heavily on the sweeter side, the intensity is propped up by the proof, allowing the flavors to hit the high sweet notes with a sturdy, but welcome, backing of heat. The overall combination is just the right amount of everything it has to offer.

The whiskey intensifies in the finish, starting with a wave of spicy heat. Caramel, graham cracker, and burnt oak meld into a sugary soiree, complementing the persistent spicy heat. The medium to long finish trails off nicely, meeting the expectations initially set by the whiskey’s aroma. It’s Jack the way you want Jack to be.

Jack Daniel’s Bonded is as much a surprise as it is a “duh” release for the brand. Jack Daniel’s Tennessee Whiskey is extraordinarily popular, and was even named the most valuable spirits brand in the world by one account. But at the same time, it wouldn’t be surprising if many still just think of it as the “Jack and Coke” brand that got you through college. The fact is, the Jack Daniel Distillery is making some of the best whiskey on the planet, and with their expansion into the bourbon and whiskey enthusiast realm, they are continually earning their stripes among even the most critical critics. Arguably, their first big breakthrough was in 2017 with Jack Daniel’s Barrel Proof, and they have been on a roll since then. Offered for $65 at the time, the Brown-Forman owned distillery shook enthusiasts down to their bootstraps with the monumental release that was readily accessible to just about everyone who sought it out. Since then, they have upped the ante on numerous occasions, from their 2018 Heritage Barrel release to their Single Barrel Special Release Barrel Proof Rye.

Bonded is an obvious, yet groundbreaking release at the same time. It seems obvious that such a popular whiskey brand would run the gamut with their signature flavor profile, especially one as distinct as Jack Daniel’s. At the same time, why fix something that isn’t broken? The standard Jack Daniel’s Tennessee Whiskey owns its niche like no other, and I’m not ashamed to admit that I drink it on just about every golf course I visit and every wedding reception I attend. But if it’s missing anything, it’s potency. At 80 proof it offers plenty of flavor, but lacks the oomph I really crave as a bourbon enthusiast. Barrel Proof scratched that itch, but at a whopping 130 or so proof, the extra 50 proof points above the standard version certainly morphs the whiskey into something else entirely. Bruce Banner’s Hulk maybe, with whispers of the man but in every other way the oversized beast.

Bonded takes everything about its lower proof counterpart, and turns up the volume on it without dramatically deviating from what you would expect it to be. It’s full of rich maple sugar, still has some of that quintessential Jack Daniel’s banana, and cranks the heat enough to make you perk up and pay attention. It takes an already good, distinct tasting whiskey, and makes it better in every way without changing what it already is.

One important aspect about this whiskey and its Triple Mash counterpart, is the change to 700mL bottle size as opposed to the typical 750mL we are accustomed to in the United States. In late 2020, the Alcohol and Tobacco Tax and Trade Bureau (TTB) amended regulations that govern wine and spirits bottle sizes, adding four new allowable standards of fill for distilled spirits: 700mL, 720mL, 900mL, and 1.8L. According to the TTB, “These new container sizes will provide bottlers with flexibility by allowing the use of the added container sizes, and will facilitate the movement of goods in domestic and international commerce, while also providing consumers broader purchasing options.” Notably, 700mL is a more common bottle size globally, so the 750mL we're accustomed to here in the United States is the oddity, not the other way around.

Since the change, all has been quiet on the American Whiskey front when it comes to bottle size…until now. While the initial reaction to the change to 700mL for this release might contain an element of shock for some, the uniform bottle size around the world will improve production efficiencies at both the distillery and manufacturer according to the company. Notably, Jack Daniel’s Bonded is released in 700mL and 1L varieties.

So to put a fictitious 750mL bottle’s equivalent price into perspective, you would simply take the cost per mL (about $0.043), and add the cost of an additional 50mL to it, which equates to about $2.15 more. In a bubble it’s a fairly insignificant difference, and if you simply want to compare apples to apples then just consider this bottle’s asking price to be $32.15 (for its fictitious 750mL equivalent).

In reality of course, the MSRP is $30, and the bottle size is 700mL. At that price point, this is a no-brainer. It’s better Jack Daniel’s in every way, and $30 for a bottle is a really good value. Selecting the more worthy barrels most certainly factors into the mix, and I would expect Jack Daniel’s master distiller Chris Fletcher and his team would select some of the better barrels for this particular release. It will be ongoing, and hopefully becomes more readily accessible once the initial ferver settles. Jack Daniel’s loving value seekers may rarely reach for it over the standard edition, but enthusiasts who understand and recognize the meaning of bottled in bond will pull a bottle of Bonded over the standard edition every time. Put simply, it’s a fantastic price for a really good, unique tasting whiskey.

Jack Daniel’s Bonded is everything you ever wanted out of the standard Jack Daniel’s Tennessee Whiskey without changing it too drastically…and it’s offered at a fantastic price point.

It’s fun when a new whiskey comes to market that gets you excited, and Jack Daniel’s Bonded gets me excited. It’s accessible to everyone at its price point. As such a widely recognizable brand, it helps get the attention of casual drinkers, invoking a bit of interest that might help transition some towards becoming more thoughtful whiskey enthusiasts. Bonded takes an already good whiskey that appeals to many people and pushes it into more meaningful territory. In fact, the summary of what bottled in bond means (or “bonded” for short), is printed right on the label. While the change in bottle size leaves room for further debate on the issue at large, Jack Daniel’s Bonded is a hit, plain and simple.

Buy Jack Daniel’s Bonded Tennessee Whiskey at Frootbat
‍The sample used for this review was provided to us at no cost courtesy its respective company. We thank them for allowing us to review it with no strings attached.
360 video 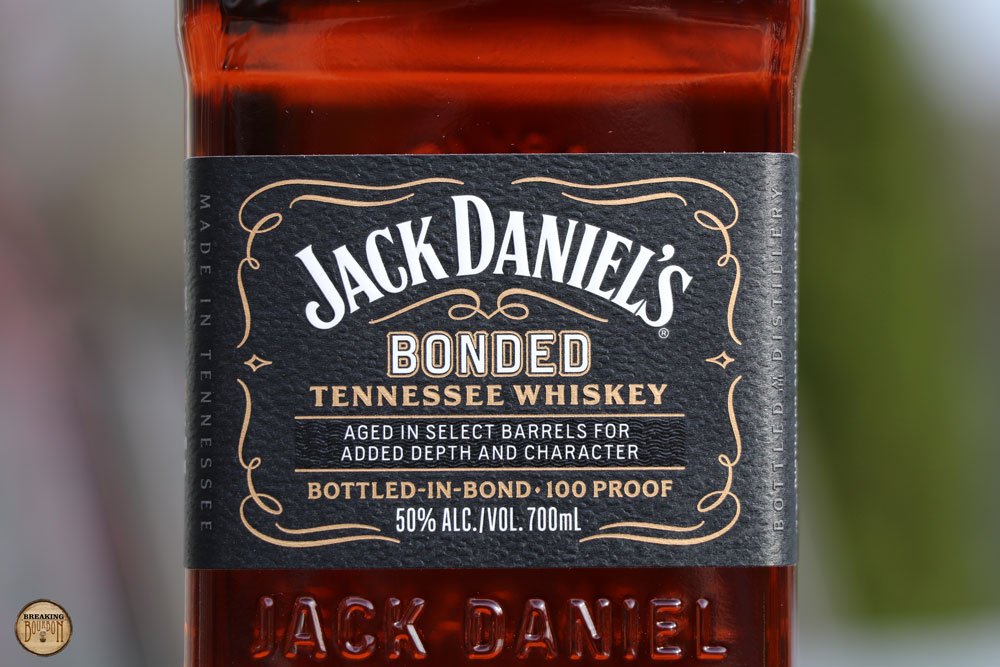 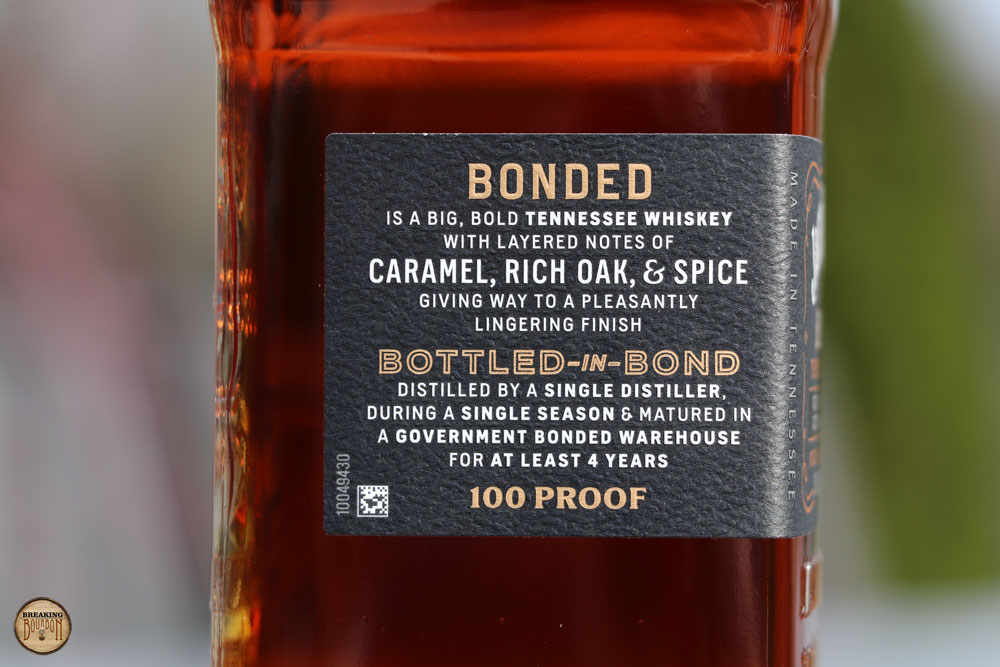 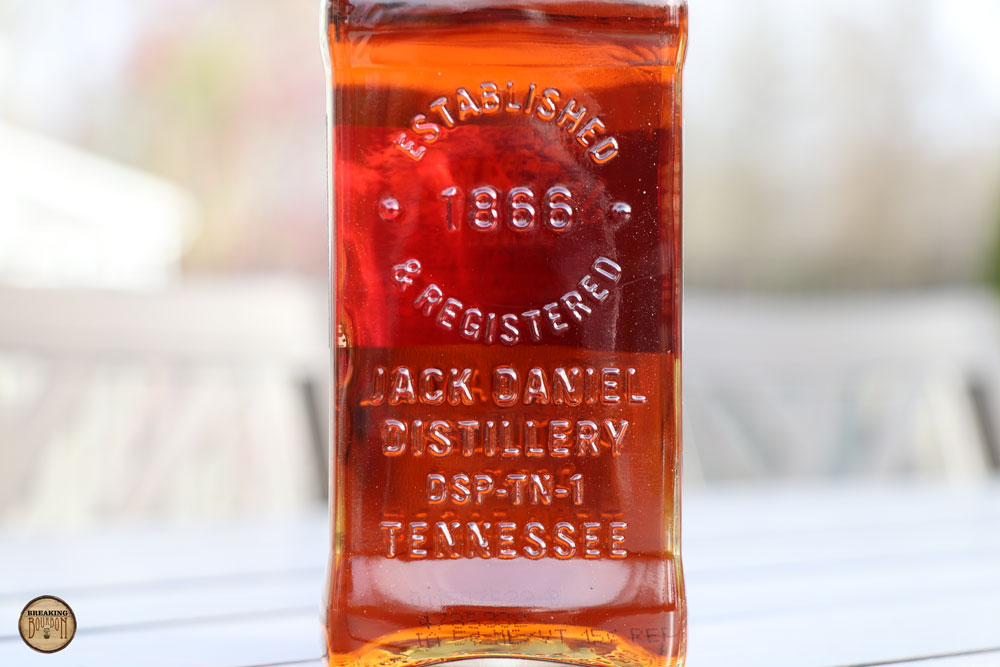 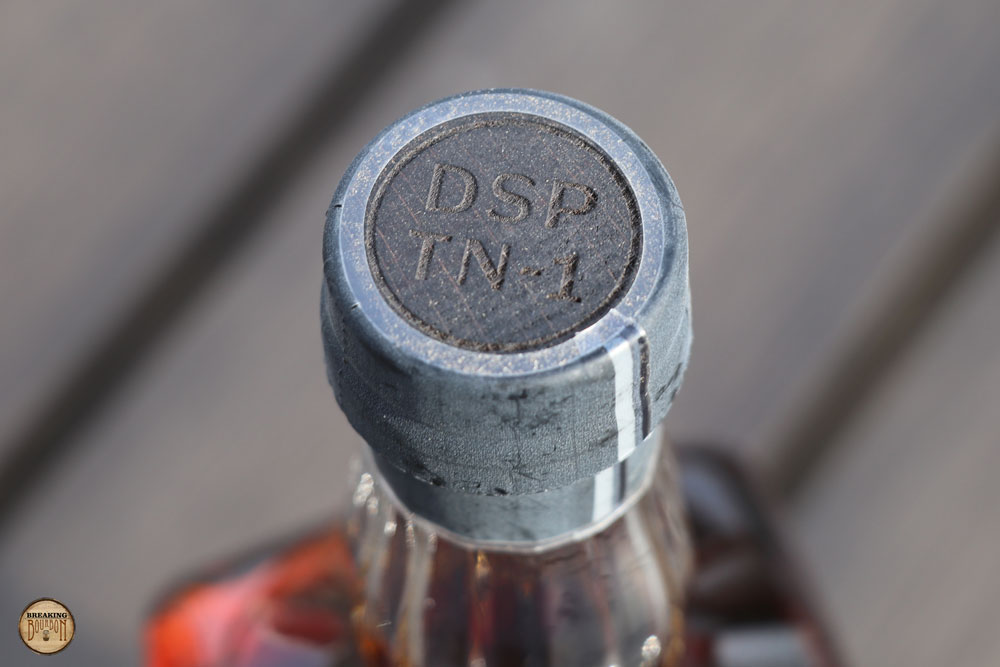