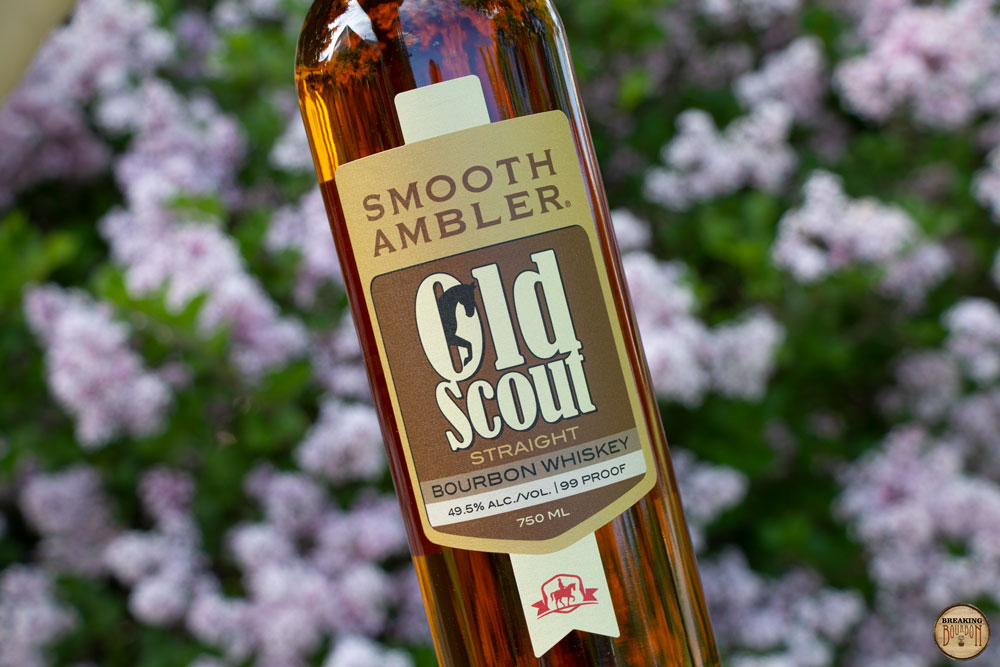 Originally released with a 7 year age statement, the age stated version was suspended in 2016 as a result of rapid and unanticipated growth. Not long after, Smooth Ambler Spirits Co. was acquired by spirits giant Pernod Ricard. Later in 2019 Old Scout was re-released, this time with no age statement (though the company notes the bourbon is approximately five years old) and is now priced about $5 more at a suggested price of $45.

Highlighting transparency, the “Old Scout” name specifically refers to the fact that the product is sourced, or as Smooth Ambler refers to it, “Scouted out.” This particular bottle is sourced from MGP in Indiana. The company plans to release at least 8,000 6-pack cases on an annual basis.

The bottle in review is from Batch 32 and was purchased in early 2021.

Aromas of spicy tobacco, baking spices, and toasted oak combine to form a spicy introduction to the bourbon. A light waft of cinnamon bark adds an additional layer of depth, and there is a chocolatey undertone present as well. Unfortunately a small but noticeable amount of ethanol makes itself present, taking what might otherwise be an incredible nose into more average territory.

Despite a wave of spice on the nose, the flavors initially land softly on the palate. Rich flavors of caramel, toasted oak, leather, and a sweet cigar note introduce the sip. An unsweetened chocolate undertone rounds out the sweeter flavors, with flavors of baking spice and toasted oak on the backend. There is an earthy characteristic to it as well, which is not found in any specific flavor but more their combination and delivery. Overall it’s a pleasing combination of flavors with a satisfying mouthfeel.

Spice continues to develop into the long, delicious finish, which is the highlight of the sip. The ever-present spice is contrasted by sweeter notes of graham cracker, toasted marshmallow, caramel, and a hint of cherry. As the finish fades, the spicy underpinning transitions from baking spices to cinnamon spice, showcasing the bourbon’s depth and high rye potency.

While the mainstream consumer may not realize it, many of the bourbons available today are produced by independent companies, and typically sourced from the same distillery - MGP in Indiana. Well-researched bourbon enthusiasts know this, but disagree wildly when it comes to whether brands who are sourcing from the same distillery(ies) are successfully differentiating their own products, or merely selling the same whiskey with different packaging.

Arguably the same whiskey from the same distillery, popular brands sourcing from MGP include Smoke Wagon, Penelope, and Old Elk, to name just a few of the many brands on MGP’s customer list. However, every brand offers a unique twist, and some more than others. Tasted side by side, I would be hard-pressed to guess that the bourbon inside each of these brand’s bottles is more or less “the same,” and digging deeper we learn that it isn’t. Different mashbills, blending techniques, proofs, and even aging in different locations all contribute to the nuances that ultimately differentiate each of these products.

Somewhat surprisingly, Smooth Ambler Old Scout offers a similar flavor profile now as it was when I reviewed the 7 Year age stated version, which was discontinued five years ago. I specifically avoided re-reading that review until after I had finished tasting notes and ratings of this updated NAS version, and I was surprised how similar they are when I looked back. Smooth Ambler is certainly aiming for a specific flavor profile, and they are successfully achieving it with an underlying earthy characteristic that I found with both, along with similar complementary flavor notes. It’s this earthy characteristic that makes Old Scout’s flavor profile notable, and one that I don’t necessarily find with many brands, let alone those sourced from MGP.

Compared to the original 7 Year version, which was about $5 less and offered an age statement, it’s easy to immediately dismiss the new NAS version’s $45 price tag. But considering the fact that bourbon has continued its rise in popularity since then, prices on just about everything have gone up, and Old Scout is a well-crafted bourbon, the price seems a bit more fair. And as much as we would like to, we simply cannot travel back in time and clear the shelves of bourbons we now know are worth every penny and then some. Probably the best comparison is Smoke Wagon Small Batch Bourbon. Coming in at 100 proof compared to Old Scout’s 99 (let’s all just agree that’s the same), the two are both offered at a suggested $45 price point and have the same MGP sourced mashbill. While I favor Old Scout’s flavor profile a hair over Smoke Wagon’s, the two bourbons offer different flavor profiles but a notably similar level of satisfaction.

From the West Virginia bourbon makers we have all come to know, what Smooth Ambler’s re-release of Old Scout lacks in an age statement, it makes up for with an enjoyable flavor profile and overall drinkability.

I have fond memories of Old Scout from the original days of the brand, so I anticipated a wave of disappointment from what is now a NAS bourbon that is essentially backed by a spirits giant, Pernod Ricard. Arguably, I had kind of forgotten about the brand and hardly took notice when I first saw the NAS version back on the shelf. Fortunately, I was pleasantly surprised when I tasted it. I also know company founder and master distiller John Little puts a lot of effort into the company’s products, so it was reassuring to find the latest version of Old Scout is just as good - if not better - than the original version. Could I ask for a return of the age statement? Of course. But as we’ve discussed before that may not be necessary, and might be better served when it comes to single barrel offerings. Old Scout is exactly what it should be - a good bourbon with a unique yet straightforward flavor profile offered at a fair price and a versatile proof point.

Buy Smooth Ambler Old Scout Bourbon (NAS - Batch 32) at Frootbat
‍The sample used for this review was provided to us at no cost courtesy its respective company. We thank them for allowing us to review it with no strings attached.
360 video 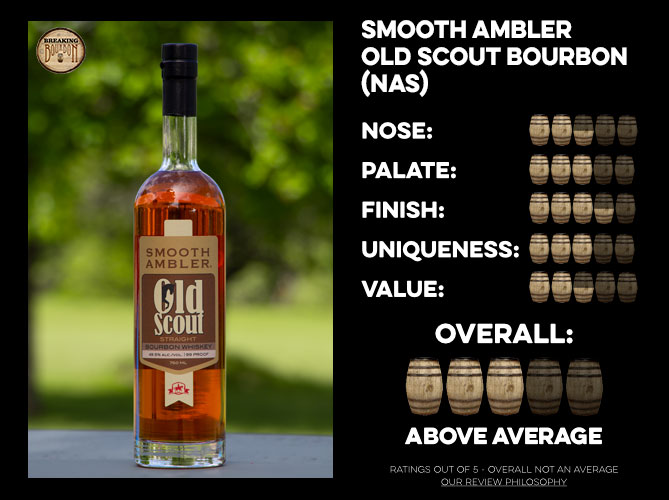 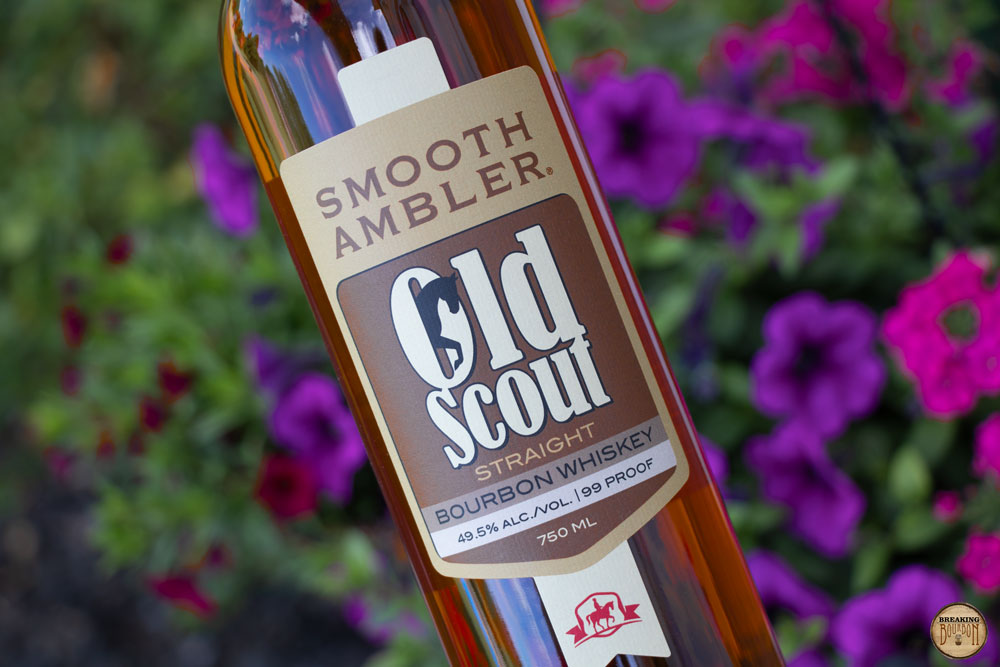 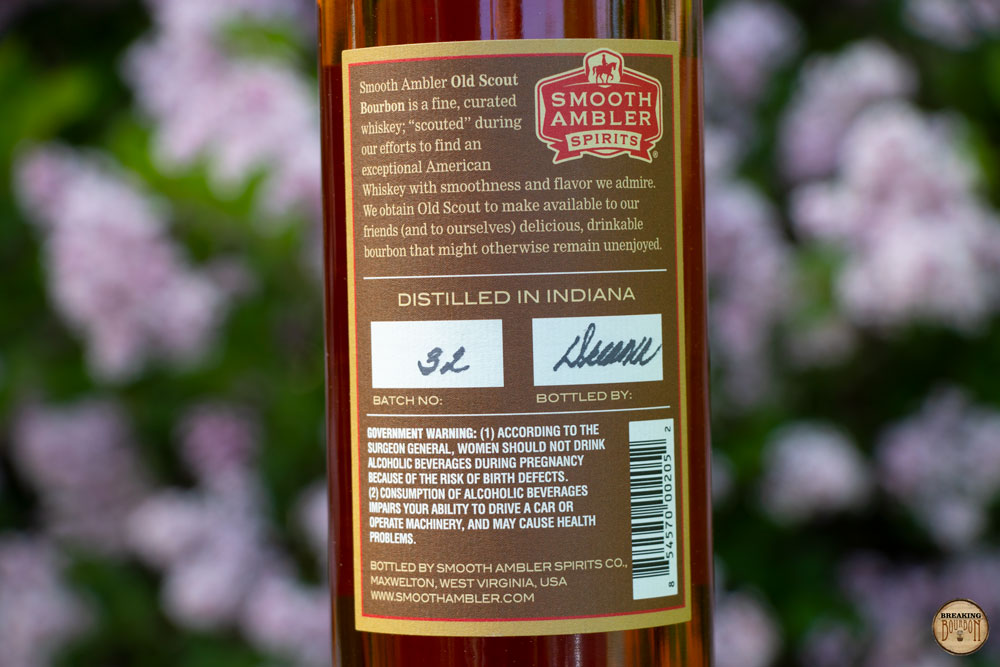 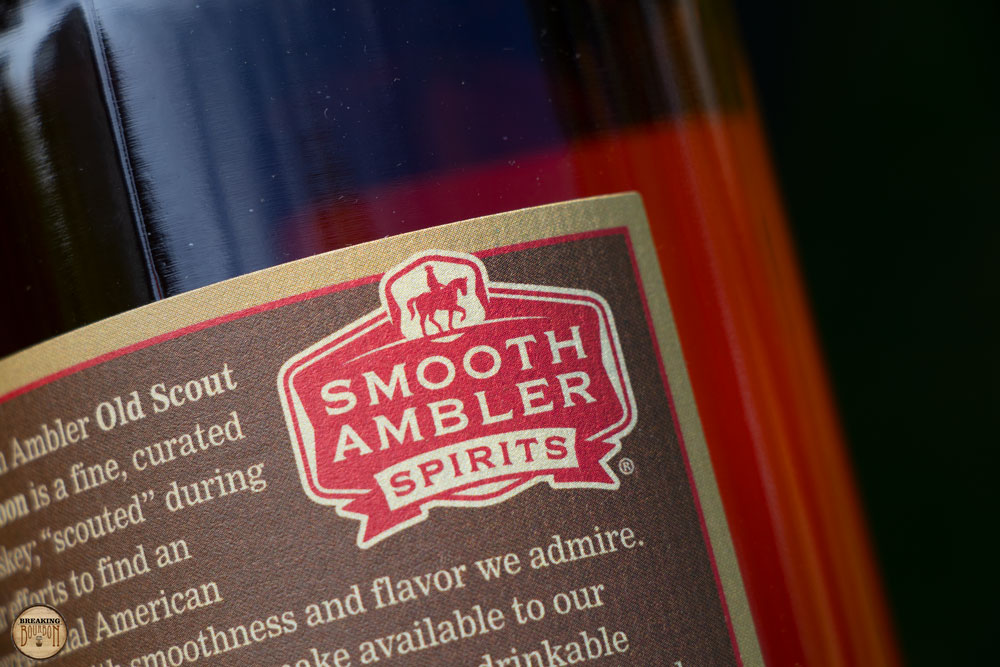 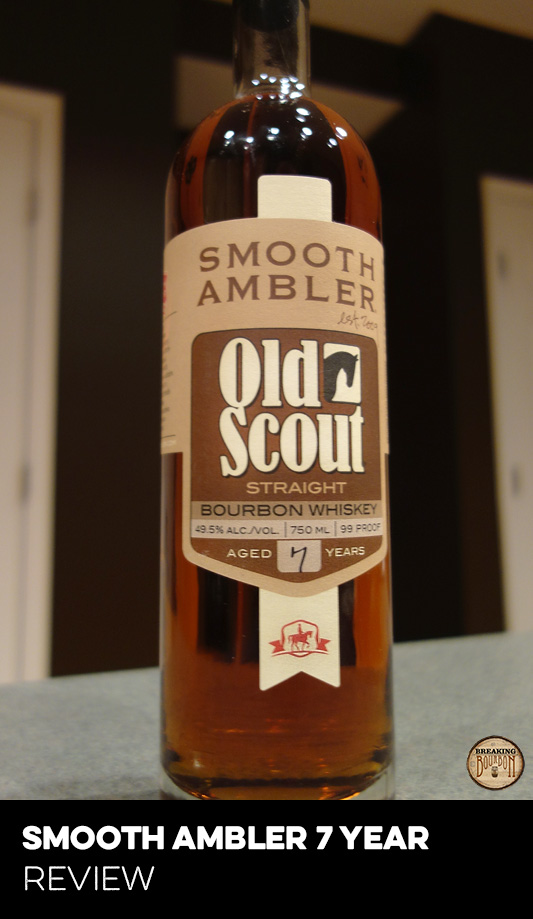 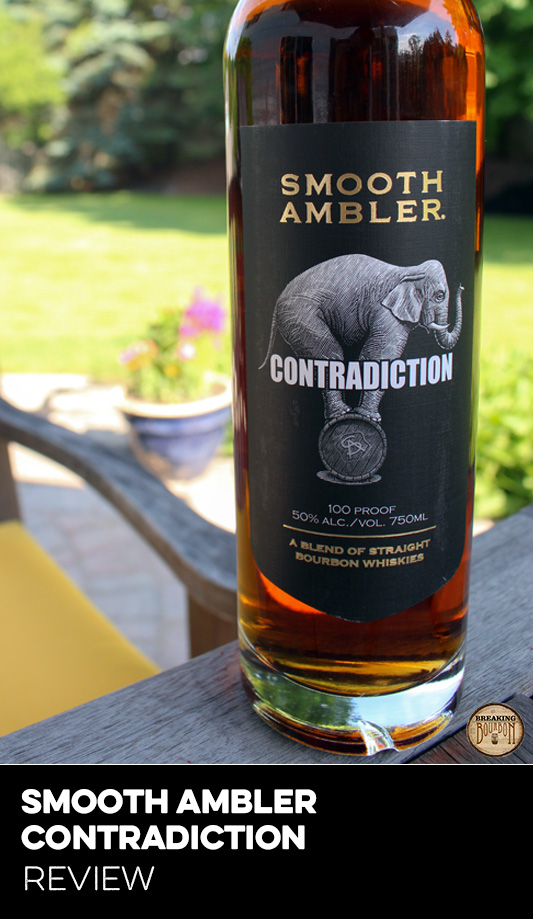