Russell’s Reserve Single Barrel is bottled at 110 proof, which is likely fairly close to barrel proof considering the fact that Wild Turkey’s barrel entry proof (the proof the distillate enters the barrel for aging) is relatively low at 107 to 115 (up from 105 at one time), resulting in a low barrel proof for Wild Turkey’s bourbons by comparison to other distilleries which typically enter the barrel at the maximum allowable 125 proof. It is also non-chill filtered.

While the bourbon does not have an age statement, barrels tend to range from about 8-10 years old. Like all of Wild Turkey’s bourbons, it’s made from their single bourbon mashbill.

Big oak and rich caramel upfront, with graham cracker sweetness complementing the initial scents nicely. Taking a deeper inhale reveals a light smokiness that’s accented by cigar box and a hint of leather. The overall aroma is robust and inviting, packing enough punch to suggest it will be an intense and flavorful pour.

A vigorous mix of rye spice and charred oak combine with sweet caramel chews. Leather, tobacco, and toffee further mingle in. The nose predicts the palate accurately, as it is rich and full-bodied, showcasing a flavor profile that is quintessential Wild Turkey. Very enjoyable, robust, and easily a palate to take note of.

Tapering rye spice meets a dark fruit, tobacco, and leather slurry. Aged oak, caramel, graham cracker, and toffee flavors from the palate carry over but fade in the background. The intensity of the spice lingers against this array of flavors, making for a long and excellent finish.

I’ve discussed Wild Turkey’s range of bourbons in other reviews: Russell’s Reserve 10 Year, Rare Breed, and Kentucky Spirit. Notably, the company’s single mashbill, low barrel entry proof, and relatively similar age band makes for a tight range of standard offerings. Russell’s Reserve Single Barrel has a lot going for it: it’s almost barrel proof offering the closest to barrel proof you can get from a readily-available single barrel Wild Turkey bourbon, it’s not age stated but barrels tend to range from 8-10 years old, and it takes advantage of unique flavor nuances from barrel to barrel. For those reasons, among Wild Turkey’s standard offerings, it’s my favorite option.

Expanding the comparison to other companies’ offerings, Russell’s Reserve Single Barrel is best compared to Knob Creek Single Barrel and Four Roses Single Barrel - two readily-available, similarly aged, rye-mashbill single barrel options from major Kentucky distilleries - and each offered within 10 proof points of Russell’s Reserve. Options have grown dramatically in recent years, and while there are plenty more single barrel options to choose from, and plenty more within the 110-proof range, Knob Creek and Four Roses’ readily-available options echo similarities to Russell’s Reserve, most notably overall quality. Each shines in its own way, with Russell’s Reserve offering a taste of some of Wild Turkey’s select barrels at a proof high enough to satisfy those who enjoy a more robust pour.

Over the past eight years or so, I’ve watched Russell’s Reserve climb from about $45-$50 to closer to $60, sometimes more. Unlike some bourbons that have seen a price increase at many retailers to more than their MSRP driven by the secondary market, Russell’s Reserve has not experienced such an increase. Other Wild Turkey offerings such as Rare Breed ($50) and Kentucky Spirit ($55) come close, and the aforementioned Knob Creek Single Barrel ($45) and Four Roses Single Barrel ($45) actually clock in about $10 less. Regardless, Russell’s Reserve Single Barrel is still an above average value, offering a consistently great pour regardless of differences from barrel to barrel.

Russell’s Reserve Single Barrel is a big, bold, Wild Turkey bourbon at its finest, showcasing some of the best individual barrels the distillery has to offer at a proofpoint that will satisfy bourbon enthusiasts seeking a more robust pour.

Buy Russell’s Reserve Single Barrel Bourbon at Frootbat
‍The sample used for this review was provided to us at no cost courtesy its respective company. We thank them for allowing us to review it with no strings attached.
360 video 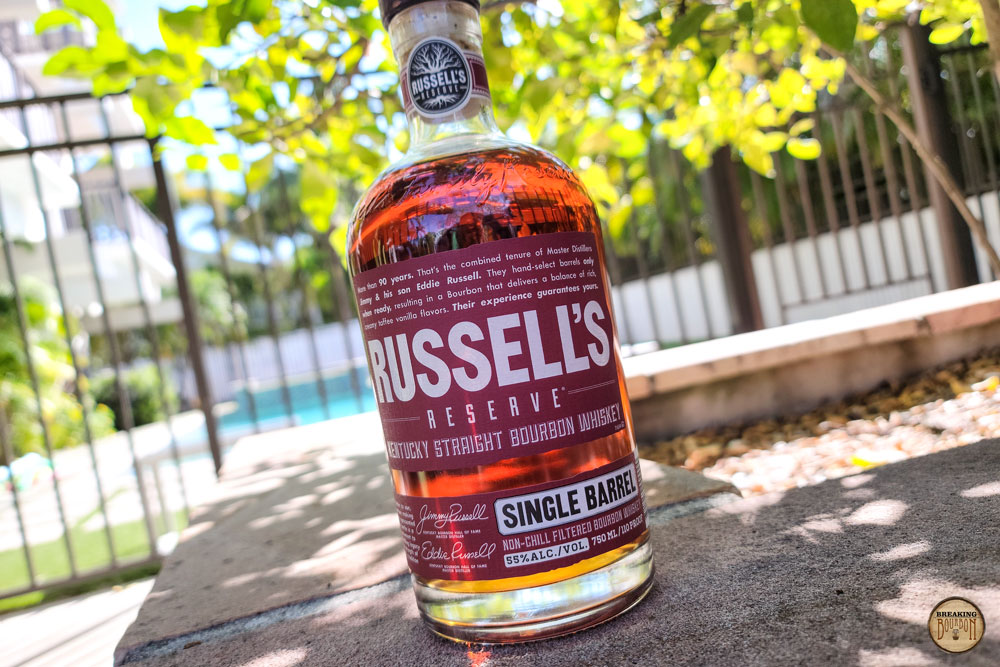 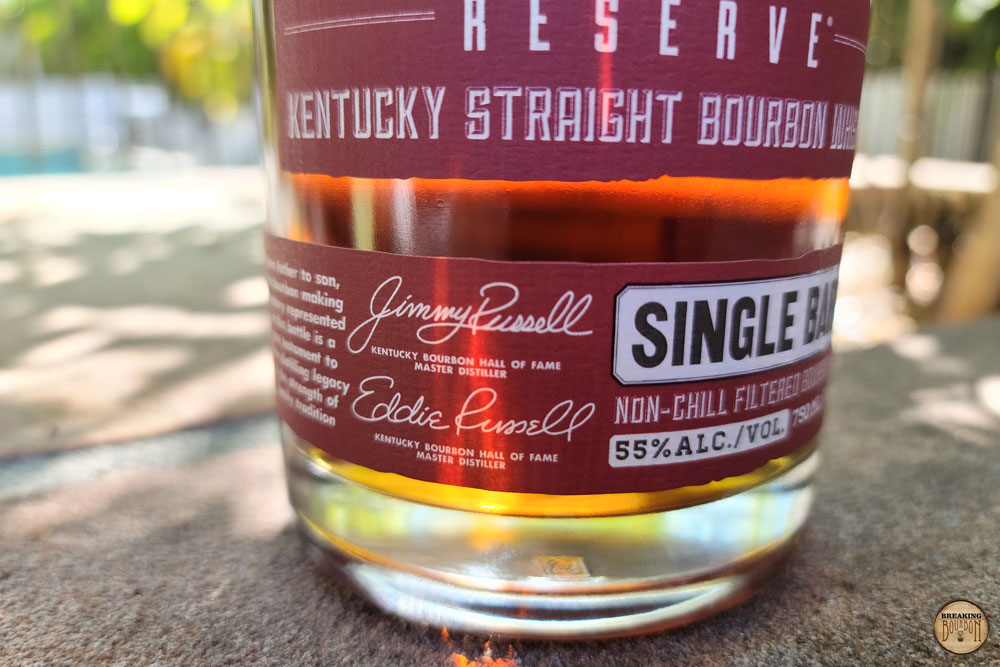 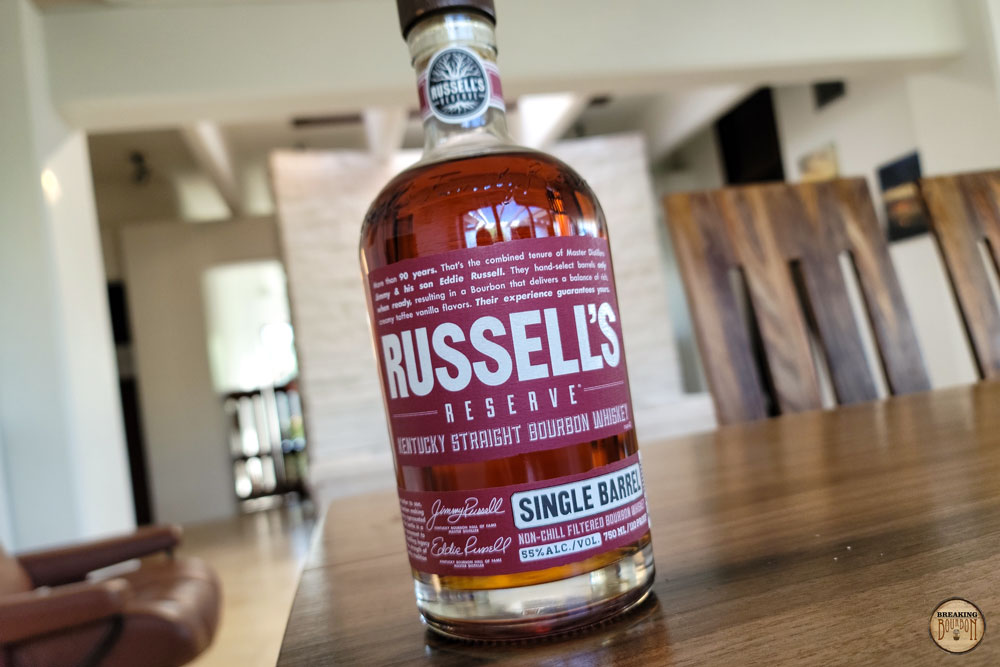