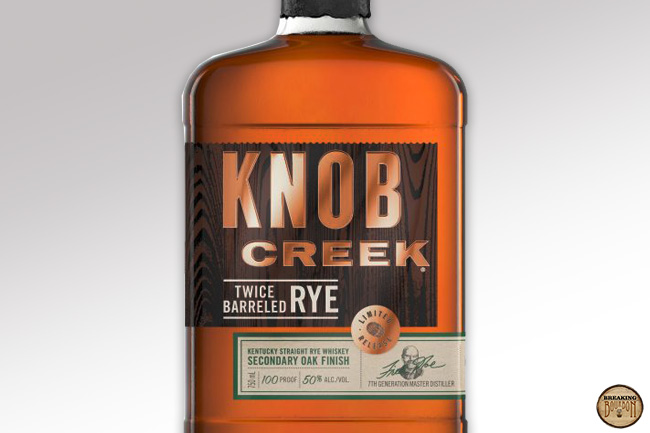 Mashbill: Undisclosed (Knob Creek Rye is believe to be at or just slightly above the legal minimum of 51% rye)

Oak, rye grain, and baked oats are at the forefront. Lingering behind are hay, muted vanilla, and sweet sugar scents. A layer of ethanol is present bringing a noticeable overlay of heat to the nose. The effect allows the nose to be nicely balanced, though slightly hot for the proof.

Rye spice, vanilla, and smoky oak quickly appear with white pepper and light anise hiding in the background. The double barrel effect is in full play in the palate as a noticeable underlying level of sweetness is present. This doesn’t come as a surprise as a deeply charred second barrel typically delivers this effect. While the nose may have shown some heat, the palate is an easy sip and readily allows you to roll it around your mouth to dissect the flavors. It adds a nice twist to your average rye experience.

The sweet sugars carry through to the finish and combine with a low simmering heat that is present throughout. Sweet vanilla and oak kick things off and quickly fade to a drier leathery oak combo that lingers for a while. It’s not your traditional rye finish, but in line with the rest of the sip, albeit delivering a slightly weaker experience than the nose and palate.

Knob Creek Twice Barreled Rye is definitely sweeter than your normal rye experience. The sweetness however doesn’t come across as fruity as what I’ve found in other sweeter ryes like Rittenhouse Rye Bottled in Bond or Pinhook Bourbon n Rye. Instead, the sweetness comes across from the double barrel process, which for a rye, is rarely if ever seen.

Beam knew exactly what they were doing when using a heavier level 4 char for the second barrel. This sweetness adds a nice contrasting play with the rye grain, and delivers an end result that is certainly interesting. It’s not the most unique tasting rye I’ve ever tasted, however it does bring a certain newness to the rye category from those extra sugary flavors delivered by the double barrel process.

In theory, $45 for a limited release is about as good as it gets nowadays. Outside of Beam, there aren’t too many major distilleries pricing their limited editions this inexpensively, with perhaps Barton 1792’s recent limited releases readily coming to mind. Whereas the recent 2018 Knob Creek Cask Strength Rye was priced at double the cost of a regular Knob Creek Rye, Twice Barreled Rye is only $10-$15 more.

That said, a low price alone doesn’t necessarily deliver a great value either. The flavors, while unique, are also not your typical rye flavors, which may turn some people off. For the price, I was expecting a more intricate play between the spice and sweetness found in the sip. At $45 it’s priced where it should be, but I wouldn’t recommend paying more than MSRP for this release either.

Knob Creek Twice Barreled Rye won’t blow anyone away. What it will do though, is deliver a new experience for rye drinkers who are looking for something new and unique. It doesn’t deliver a typical spicy flavor profile, and that’s okay in this case. Its sweeter flavor profile presumably originating from the double barrel finishing process plays nicely with the rye spice that is noticeable and delivers an easy sipping rye. Add in a reasonable price and it’s a bottle that most rye drinkers probably won’t regret picking up to try.

The sample used for this review was provided at no cost courtesy of Knob Creek. We thank them for the sample and for allowing us to review it with no strings attached.

Buy Knob Creek Twice Barreled Rye at Frootbat
‍The sample used for this review was provided to us at no cost courtesy its respective company. We thank them for allowing us to review it with no strings attached.
360 video 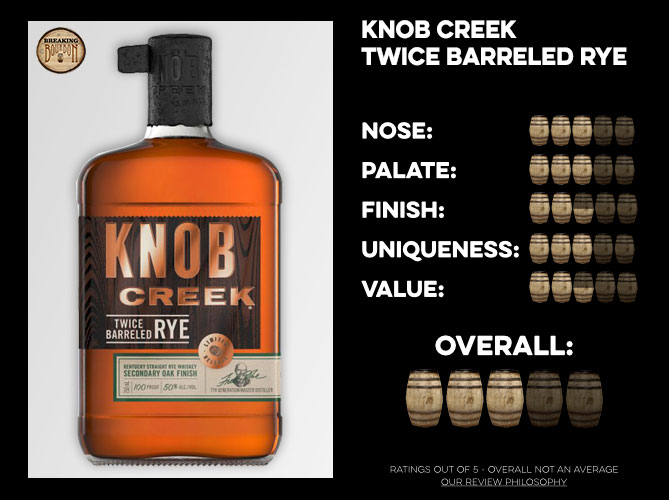 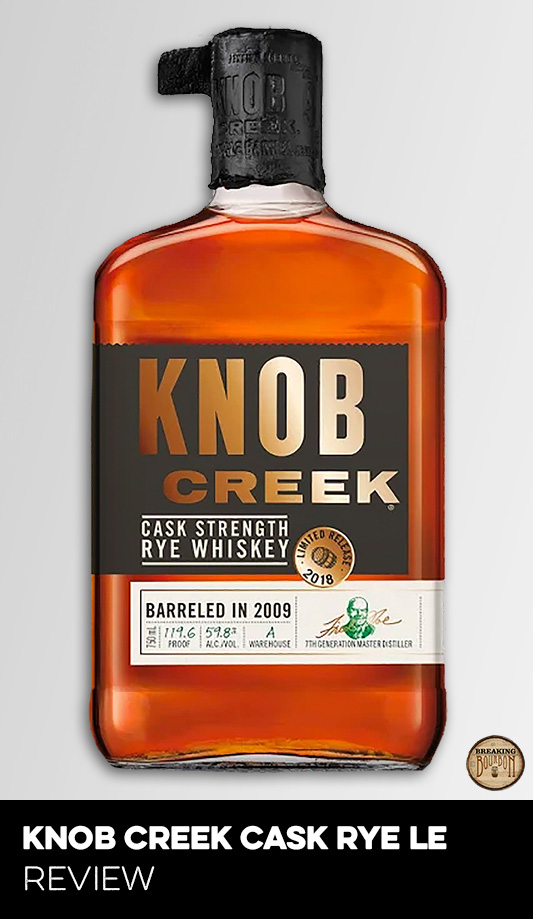