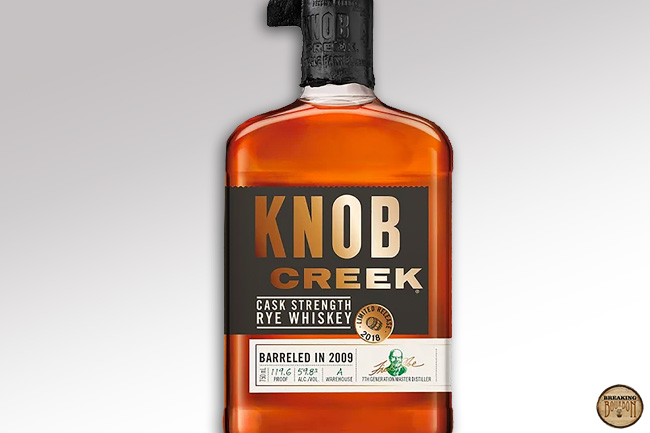 Mashbill: Undisclosed (Confirmed it shares the same mashbill as standard Knob Creek Rye, which is believe to be at or just slightly above the legal minimum of 51% rye)

*This is the first Limited Edition Rye released under the Knob Creek brand. While the label does not say “straight,” Beam Suntory has confirmed with us that it is. While it does not technically have an age statement, the press materials indicate it is 9 years old. This is further substantiated by the label indicating it was barreled in 2009, however whiskey is often set aside in steel tanks after it has been dumped to prevent further aging so that is not necessary proof of age in-and-of itself. A bottle count has not been publicly released.

Sweet vanilla and honey are enveloped in warming spices with a nice intensity. If I inhale just the right way, there’s a good amount of heat that digs its way into my nostrils making it even more pronounced. This makes for a rather bold yet still quite enjoyable aroma.

Black pepper and baking spices upfront give way to sweeter flavors of brown sugar, honey, and vanilla. The higher proof is manageable and sweet flavors do well to counter the spicy pop providing balance. The mouthfeel is satisfying, but not unusually unique in any way.

It starts with a Kentucky hug, as the spicy heat fills the back of the throat and hits with a bold intensity reminding you it’s almost 120 proof. The intensity fades quickly, leaving baking spices and charred oak against brown sugar and honey. It lingers, ultimately ending on a good note.

It’s nice to see Knob Creek expanding the rye side of their lineup, as Knob Creek Rye has always been a rye I’ve enjoyed and one I’ve found most people tend to like as well. Because of its sweetness, my assumption is there is a lot of corn in the mashbill, and it this weren’t just a barely legal rye I would be surprised. The 2018 Limited Edition is the first Knob Creek Rye I’ve had that’s over 100 proof, as I have yet to try a Knob Creek Single Barrel Select Rye which clocks in at 115 proof (also released in 2018). At 9 years, the age is relatively high for a rye, which may contribute to some of its more subtle attributes, including the balance of spicy and sweet. It’s also unknown if Knob Creek will continue to release limited edition ryes (though I’d put money on it that they probably will), however this one will likely still be somewhat of a one-of-a-kind in its own right as future potential releases would likely be released at different ages and no doubt at least slightly different flavor profiles.

With that in mind, I can’t really say there is anything about the flavor profile that really or screams unique in any sense. Instead, I have to acknowledge its balance and overall drinkability, combined with the nice intensity brought forward at its proof point of around 120...which seems to be right about where I like Knob Creek products the best.

We first wrote about this limited edition Knob Creek in our New 2018 Whiskeys article, and at the time hypothesized that it might be released at $125+ given Knob Creek’s previous history with both the Knob Creek 2001 series and Knob Creek 25th Anniversary coming in around $130. Maybe because this is a rye, or maybe because Beam is trying to aggressively expand their rye lineup and bring more positive attention to it, the suggested price of $70 is much lower than I would have anticipated.

With rising prices in the bourbon (and rye) market, a lower price sets the stage for a thought provoking discussion. Does it feel like a good value solely because it’s priced less than expected? Or does it feel cheap...like it’s not worthy of a real limited edition price tag...maybe simply because it’s a rye - bourbon’s red-headed stepchild in a sense?

To me $70 still feels like a reasonable price...though that comes with a caveat. Unlike other limited editions that seem to have some value just simply for what they are - their age, their story, their truly limited nature - this one seems to have more value in its flavor profile and drinkability than anything else. It’s not one I feel has any business being collected, or sold for a profit on the secondary market. Instead, it’s just a damn good rye that’s priced at a premium and will probably be reasonably available and hopefully opened and enjoyed by most (assuming the release numbers are similar to some of Knob Creek’s previous limited releases).

On the other hand if you’re expecting it to be twice as good as the standard Knob Creek Rye because it’s twice the price, then you’ll be disappointed. It’s more refined and more robust, but the increase in overall quality is subtle. Part of Knob Creek’s problem is the high quality and value of their standard releases, which makes it hard to swallow paying two to three times more for a limited release that might be only marginally better. But that’s the rub, and thankfully the increase isn’t as much as it probably could have been, or is in many other cases when it comes to limited editions.

Knob Creek Cask Strength Rye is a limited edition rye that tastes good and comes in at a good price, though it lacks other special qualities...as a result, its true value lies in simply opening and enjoying it.

It’s refreshing to drink a whiskey that’s positioned as a limited edition that tastes good but otherwise doesn’t have any inherently special qualities or will break the bank, though everyone’s threshold is different. Kentucky Owl Rye Batch 1achieved this. Barrell Bourbon batches achieve this as well. I’m talking about whiskeys that are priced at a premium, but also worth more opening and enjoying than they are collecting dust. I can’t say that about some of the more expensive releases hitting the market nowadays, which ultimately aren’t worth their MSRP in my mind. There are a growing number of whiskeys that might be good, just okay or even not so great but in any event don’t warrant their price tag. I can’t help but instinctively do the mental math every time I have a pour of one of them and think of how much it “cost” me in lost potential, or even actual out of pocket cost, instead of thinking about the whiskey itself. I’ve always enjoyed Knob Creek, found their everyday whiskeys to be of pretty good value, and like seeing this lineup expansion. In this case, at only $70 for a one-off batch it’s worth exploring, and you won’t feel guilty about cracking that wax even if it turns out it’s not your jam.

The sample used for this review was provided at no cost courtesy of Beam Suntory. We thank them for allowing us to review it with no strings attached.

Buy Knob Creek Cask Strength Rye - 2018 Limited Edition at Frootbat
‍The sample used for this review was provided to us at no cost courtesy its respective company. We thank them for allowing us to review it with no strings attached.
360 video 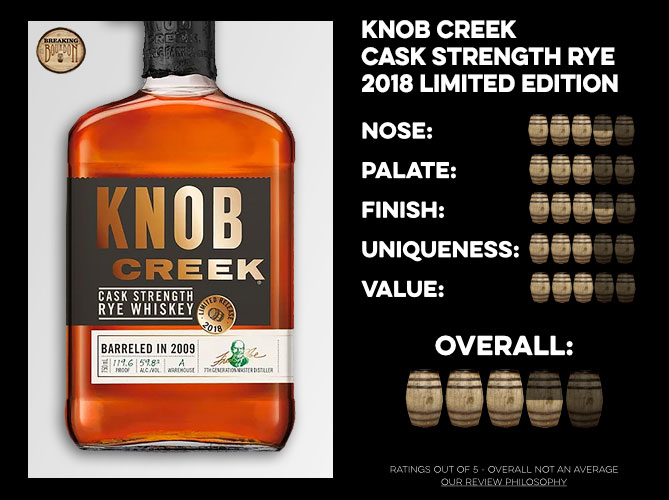