Malting barley is the most common form of malting and is used in most American whiskeys because of the enzymes it creates. These enzymes are used to convert starches from grain into fermentable sugars. Barley is typically the grain choice by distillers to malt because of its diastatic power (i.e. its ability to break down starches into fermentable sugars during mashing). Although modern day distillers don’t have to use malted barley and can add other active ingredients like liquid or powdered enzymes to facilitate conversion, it is typically still used for its historical sense and the added flavor malted barley adds to a spirit.

Malting corn is an extremely uncommon practice for whiskey distilleries to convert whole kernel corn into malt. This process is done by soaking the corn in water, draining and germinating it. After the corn has germinated, it is then dried and heated (kilned). Malting corn requires more processing time to facilitate sufficient steeping and germination. Malted corn also has less power to convert starches than malted barley and is another reason why it isn’t adopted by more distilleries.

‍‍100% corn-based bourbon can be confusing since corn whiskey, light whiskey, and bourbon can all have this same mashbill. The most notable point of confusion is between bourbon and corn whiskey. To be labeled a corn whiskey in the United States, a whiskey must contain no less than 80% corn in its mashbill, it must be distilled to a maximum strength of 160 proof, and while it does not have to be aged, if it is, if it is aged it must be aged in uncharred or used oak containers, and must be barreled at no more than 125 proof. Corn whiskey differs from bourbon in two specific ways, the first being that bourbon's mashbill must be at least 51% corn, and the other being that bourbon must be aged in new charred oak containers. Notably, a bourbon can have a mashbill that contains as much as 100% corn with no other grains as long as it meets the other requirements set forth to be classified as bourbon. Furthermore, light whiskey distinguishes itself from bourbon in that it does not require a specific mashbill, it must be aged either in used or uncharred new oak containers, and must be distilled to between 160 and 190 proof. The majority of light whiskey currently on the market is 99% corn, 1% malted barley.

‍‍Frey Ranch co-founder Colby Frey malts his estate grown corn in a custom-made steep tank and germination/kilning drum before they’re milled and distilled on-site. 100% Malted Corn Bourbon and Quad Malt Bourbon Whiskey are part of the company’s Malted Grains Series and were both released as distillery exclusives. For more information on how Frey Ranch makes their 100% Malted Corn Bourbon and malted corn's future outlook, check out our Q&A with Colby Frey.

A light cinnamon apple scent floats out of the glass. It's followed by spicy cinnamon, cedar, and melted caramel. Though it leans sweet, there’s a slightly spicy scent that cuts through creating an engaging dynamic with the sweetness. It's not overly complex, but much more interesting than you’d expect from a bourbon distilled from only corn. It follows the route of pleasant over challenging, making for a satisfying aroma overall.

Its medium bodied palate is the definition of such, as it sways ever so slightly between light sweet milky corn and roasted spice-filled corn. Lying in the middle are notes of nougat and honey, along with summer squash and toast. It makes for an unusual collection of flavors, yet their overall gentleness allows them to come together in sync. It’s the whiskey’s sweetness more than its spice that makes the most impact. Despite the flavor profile being focused in one direction, it makes for an unexpectedly charming sip nevertheless.

A layer of seasoned oak overtakes the sip leaving a mild boiled peanut shell aftertaste. There’s a ramp up of heat and some gentle spice during the finish that amplifies the whiskey’s nougat and honey notes from the palate. It's a short finish overall, saying what it has to say before quickly dissipating; though the memory of its pleasantness will stay with you, leaving a positive impression.

Malting corn is a time intensive process, and most American distilleries don’t have the capability to do it on their own. Also, many malthouses are likely not malting corn in any large capacity, so purchasing it isn't a viable option either. With the relatively limited appeal of bourbon (and whiskey for that matter) made with 100% corn, it doesn’t make a lot of sense for most distilleries to go to the trouble of releasing a 100% corn product, let alone one that features 100% malted corn

The reason why many bourbons include malted barley in their mashbill is because the malting process creates enzymes that are needed for distillation. Though producers have the option of directly adding enzymes during distillation, there is still something more genuine and a bit more romantic about doing it the old fashioned way - and of course, bourbon is always about the old fashioned.

That doesn’t mean no one is trying though. Bourbon distilled from 100% corn (or close) is slowly growing out of its niche and coming into its own. Thanks to the likes of Balcones, Reservoir Distillery, Tuthilltown Distillery, Yellow Rose Distilling, High Wire Distilling, and FEW Spirits, more 100% corn bourbons are coming to market than ever before. Yet none have been distilled with 100% malted corn until now.

In the general sense, 100% corn mash bourbons with their single grain mashbills often have the reputation of being hot and simple in their complexity. This is one reason producers often add other grains to mellow the heat, add spice, or increase a bourbon’s complexity. Malting tends to result in a product that delivers a more earthy flavor, and with malted corn, can result in an even sweeter whiskey than one made with non-malted corn. Frey Ranch’s 100% Malted Corn Bourbon shows how malting can enhance the 100% corn bourbon experience. Much like the mellowing effect malting rye has on rye grains’ typical spiciness, Frey Ranch’s corn malting helps round out the typical high corn bourbon flavor profile, enhances its sweetness, and adds a much needed layer of complexity (however minor it may be). However, Frey Ranch’s 100% Malted Corn Bourbon also isn’t without spice. Whether that is due to the particular corn used, climate, distilling style, or Frey Ranch’s malting process, it's a layer not typically found in many high corn bourbons. At the end of the day, a 100% malted corn bourbon is incredibly unique in its own right, but its flavor profile will still be recognizable by any bourbon drinker with minor differences that easily stand out.

As a product that is the result of a very rare and hands-on labor intensive process, a high price tag is to be expected. It's also a product that currently has limited mass market appeal, so it makes sense for this to be a distillery-only release and for it to be released in 375mL bottles. I will always applaud any distillery that offers their product in half-sized bottles, and while $59 does seem reasonable, if this was $118 for a 750mL bottle, it would be a harder pill to swallow. That said, Woodford Reserve tends to be the most adventurous mass market distillery and their highly unique Master’s Collection releases are now trending in the $130 price range, though they are also releasing experimental distillery-only releases for $60. Yet, even if Woodford released a 100% malted corn product (which don’t count them out doing so just yet), $130 would be equally hard to fully justify unless it came with a double-digit age statement. But given the choice, $59 for a 375mL of a new(ish) style of bourbon that I’m sure plenty of whiskey geeks will be curious about versus not having the option to purchase it at all, I’d pick the $59 option every time. Yes, it's more than I’d like to see it priced at, but my curiosity is piqued, and when that happens, I’m game.

Frey Ranch attempts to answer the question few have probably asked: “What would a 100% malted corn bourbon taste like? The answer: pretty darn good.

Perhaps in a moment of serendipity, I was recently wondering why we don’t see a malted corn bourbon on the market, and it just so happened that Frey Ranch announced a 100% Malted Corn Bourbon to my delight. With the sudden popularity of malted rye and the slightly less common malted wheat, I wondered: where is the malted corn love?

With the rise in malted cereal grains in American whiskey, it makes sense that someone finally tried their hand at a 100% malted corn bourbon. It’s likely Frey Ranch isn’t the first to attempt it, but they likely are in the immediate product-for-purchase sense. With 100% corn whiskey typically seen as overly sweet or hot, making a bourbon with malted corn keeps the sweetness, but adds complexity along with a creamy mouthfeel to the mix. It’s not a revolutionary transformation, but more of a small evolutionary one. Each aspect of Frey Ranch 100% Malted Corn Bourbon is a refinement over a typical 100% corn bourbon. Age makes a big difference when it comes to 100% corn products, and Frey Ranch did well in this department. They should be applauded that they had the mindset 6 years ago to lay down 100% malted corn barrels and didn’t rush them to market as malted rye (and wheat) became more popular over the last few years.

While the jury is still out if 100% corn bourbon can stand toe to toe with more complex bourbon mashbills, it's a step in the right direction. But maybe it doesn’t have to be a direct competition and one where 100% malted corn bourbon can join alongside wheated bourbon and rye bourbon on equal terms giving whiskey drinkers even more options than they’ve ever had before.

Buy Frey Ranch 100% Malted Corn Bourbon Whiskey at Frootbat
‍The sample used for this review was provided to us at no cost courtesy its respective company. We thank them for allowing us to review it with no strings attached.
360 video 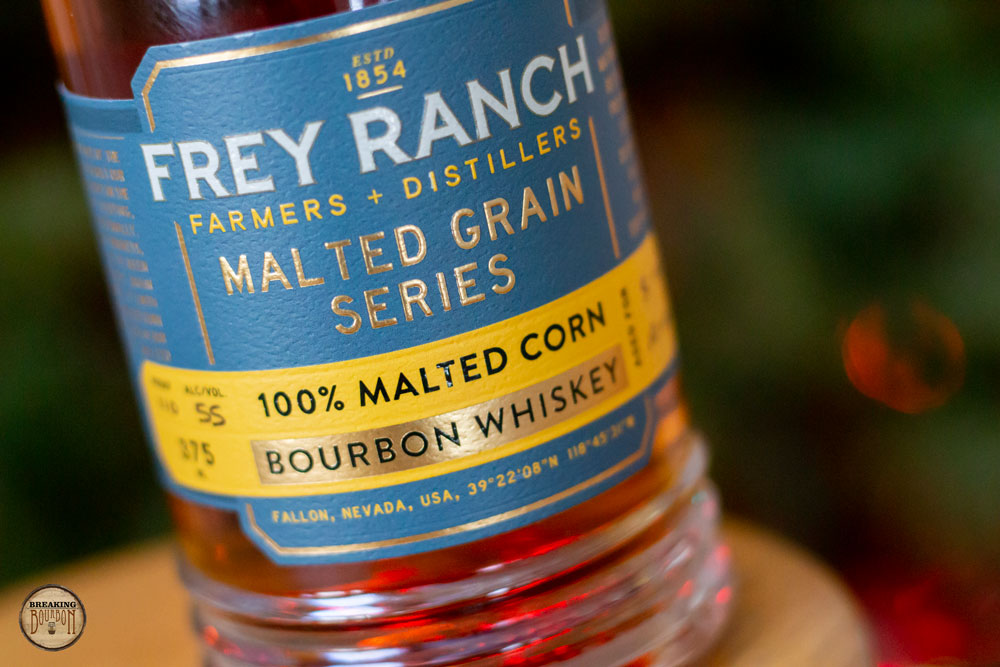 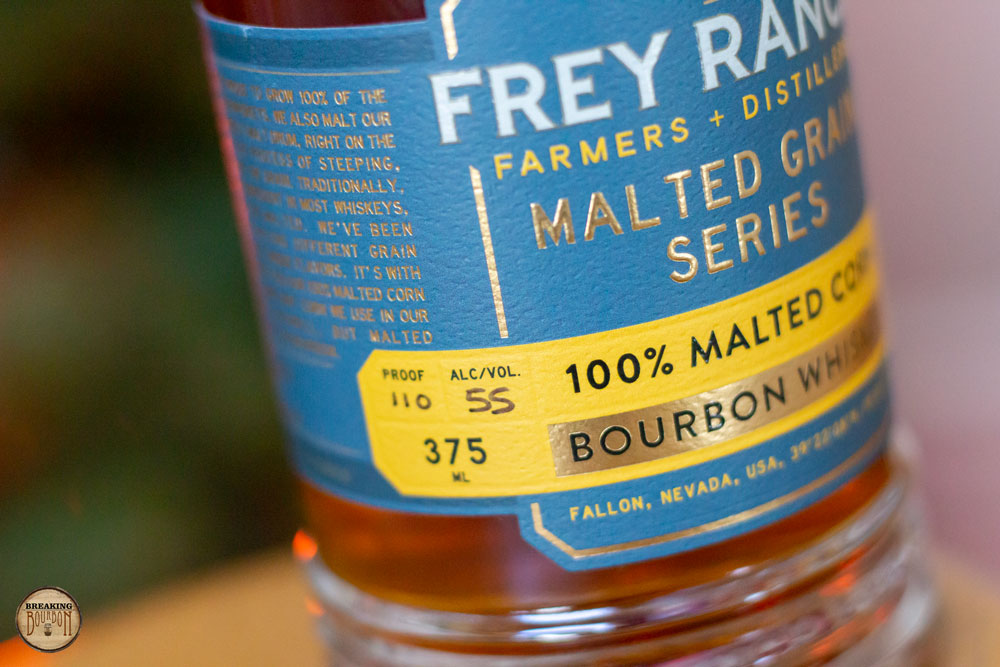 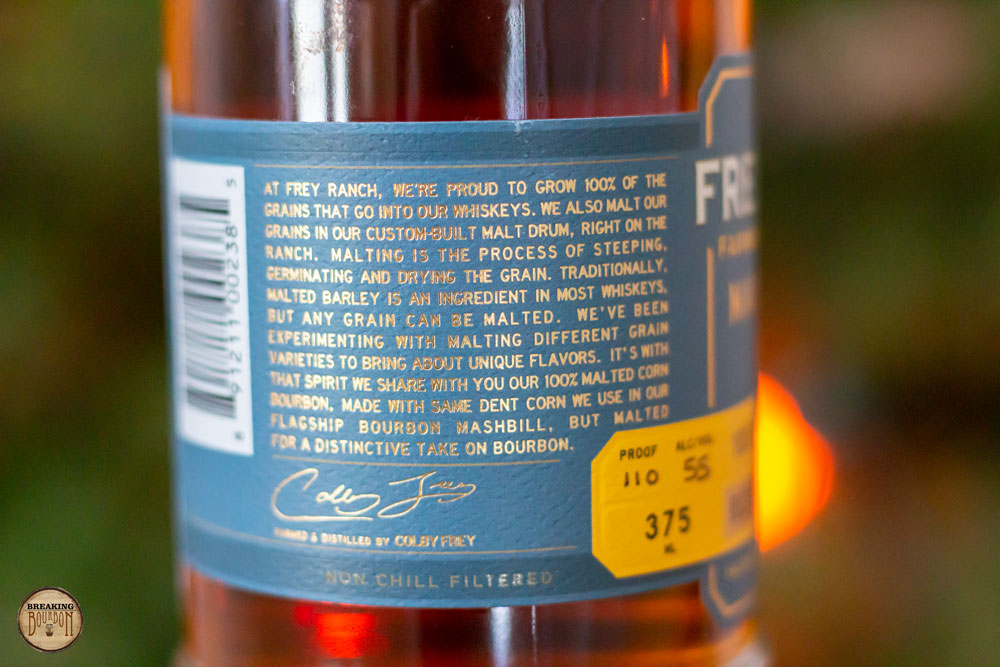