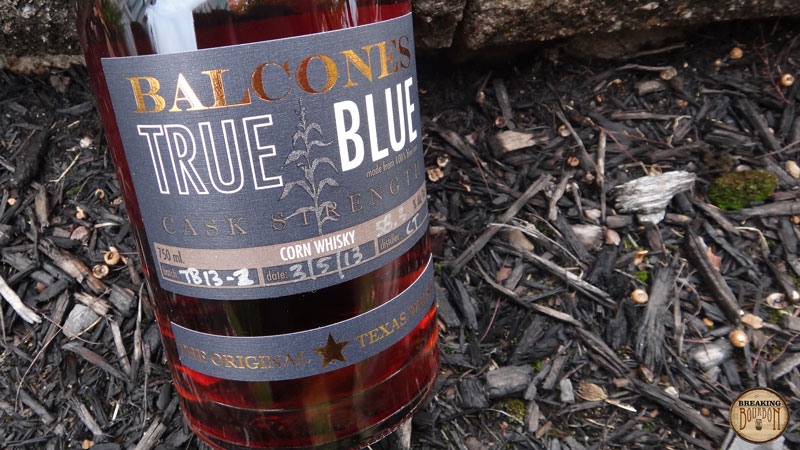 Balcones is a craft distillery in Waco Texas that has been producing “whisky” since 2008. I say “whisky” because Balcones classifies their products this way versus the typical American spelling of “whiskey”. One thing that helps them stand out from the craft distillery pack is they use unusual grains when making their products. In the case of True Blue Cask Strength, it is made from 100% roasted blue corn. True Blue is a cask strength whiskey which can vary by proof depending on what batch you try. The bottle being reviewed came from batch number TB13-2, dated 3/15/13, and distilled by CT. It should be noted that it was produced by the company’s founder Chip Tate, before he parted ways with the distillery in late 2014.

Not knowing what to expect out of a 100% roasted blue corn whisky, I’m really surprised at the depth of the nose. As would be expected from a 100% corn whiskey, corn is definitely present however not as much as you would usually find in a younger whiskey. Sweet maple sugar candy immediately jumps out followed by dried corn mixed with aged tobacco, light raisins mixed with pecans, light chocolate espresso, and something I can’t put my finger on that is akin to the smell of a fresh poured cask ale. There’s no hint of alcohol whatsoever, which is really surprising since it’s bottled at 116.6 proof. It sounds like a strange combination of smells, but the best way to sum up the nose is “deeply rich” and satisfying. The profile is so different than what I’m used to with a whiskey, that it kept sucking me back in throughout the review. Really a nice treat and in my mind, the high point of this whiskey.

The palate is sweeter than I expected. Corn is noticeably present, however so are sweet raisins mixed with brown sugar, pecans, and maple syrup, along with a subtle dose of white pepper. I’m almost tempted to make pancakes one day and pair it with this whiskey. It’s not quite as sweet as say something like Angel's Envy Rye, however it is definitely sweeter than the nose would lead you to believe. Like the nose, there was barely any alcohol noticeable in the palate which is a nice surprise considering the proof.

This is one earthy dry finish. It starts with bark, aged oak, hints of dark chocolate (think 85% cocoa), aged tobacco, dried leather, and fresh ground green pepper. It then mellows out into just an earthy peppery finish that lingers for a while. It’s worth noting that the finish is relatively isolated, and started and died in my mouth rather than moving down into my throat or stomach. After the great nose and sweet palate, I was looking forward to the finish, however it didn’t live up to the task. Average at best, it doesn’t seem to push this whiskey forward as much as the nose and palate.

Balcones isn’t the only craft distillery producing a 100% corn whiskey. Among others there is Copper Craft in Michigan, as well as Hudson Distillery with their Baby Bourbon line. That being said, Balcones tastes like nothing else on the market. I’m not sure if it’s the fact that they use roasted blue corn or that Chip Tate set them up on the road to success, but True Blue Cask Strength is definitely unique like none other I’ve tasted. Similar in sweetness to a watered down Angel’s Envy Rye, the flavor profile produced from a 100% corn based whiskey was really eye opening.

Additionally while no age statement is present and this is most likely a younger whiskey (my guess is 18-24 months), I was surprised at the depth of the flavor profile it delivers. Many craft whiskeys in that age range usually don’t taste great and rarely match the hype put out by distilleries , however for Balcones True Blue Cask Strength, that doesn’t seem to be the case. Compared to other craft whiskeys around the same age, it’s full of deep flavor and really delivers a rich unique taste.

At around $55 you’re taking a gamble on a NAS 100% corn whisky. Yes it’s cask strength, but there are plenty of great bourbons and ryes in the marketplace to grab your attention in that price range. My thoughts on this are similar to Stranahan’s which comes in around the same price. It’s a craft distilled product that is trying to command a price that isn’t in line with current well established whiskey products in the market. Along with Stranahan’s, I would prefer to see this priced at $45 to make it more accessible to those looking to add some variety to their collections.

Additionally, Balcones has been in a large state of flux over the last few years. From the Chip Tate saga, to the new distillery, the wild temperature swings of Waco Texas and the types of woods used in their various sized barrels, you should expect a lot of variation between batches. This variation should eventually even out as the new distillery continues to ramp up and Balcones continues to grow its brand. That said, for now you’re taking a gamble when you buy a bottle of True Blue Cask Strength. If you happen to have this at a bar or at a friend’s place and like it, make note of the batch number and try to hunt down a bottle from that same batch.

100% Corn, Young, and Craft….everything screams stay away, however Balcones True Blue Cask Strength delivers a rewarding experience to those who choose to give it a shot.

I walked away from this review with a new appreciation of what can be done with a mashbill of just corn. Balcones True Blue Cask Strength really brought forward a flavor profile and richness that I wasn’t expecting out of a craft distiller that was using just corn and aging in the high heat of Waco, Texas. While the whiskey slowly lost steam from the palate through the finish, it delivered a much richer experience than I had originally expected.

True the price is high for what you can find on the market, and for me this is more of a once in awhile whiskey versus an everyday sipper. That being said, it really makes me want to explore more of the Balcones line and keep an eye on what they plan on delivering in the future. This is worth a try, even if you just have it in a bar one time, so that you can experience a totally different whiskey experience than one you might normally be used to. For me, this is one craft distiller that I hope makes it through this current craft boom.

Find Balcones True Blue Cask Strength at Frootbat
‍The sample used for this review was provided to us at no cost courtesy its respective company. We thank them for allowing us to review it with no strings attached.
360 video 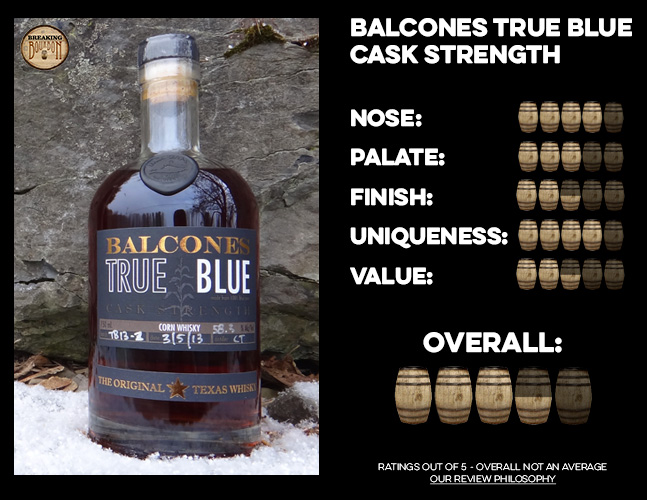 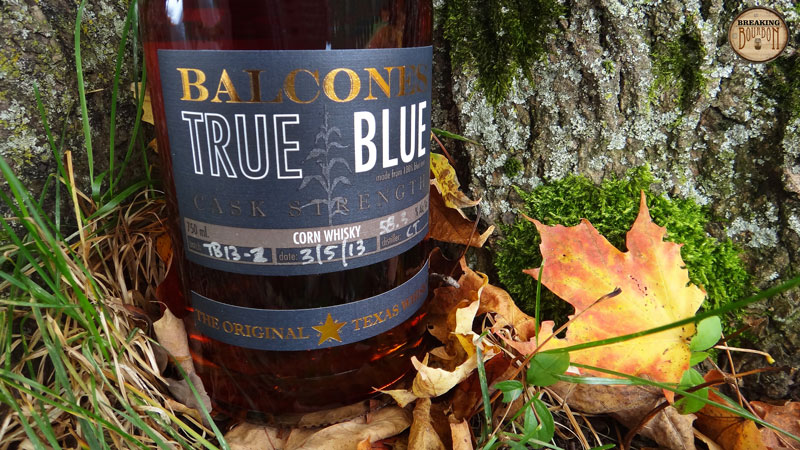 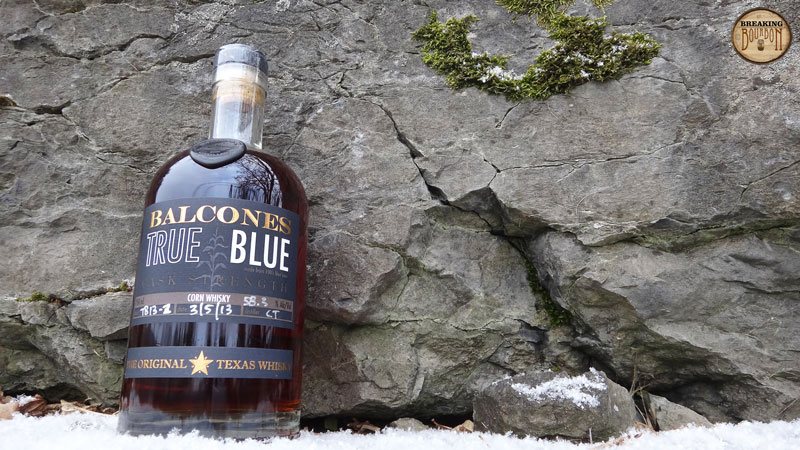 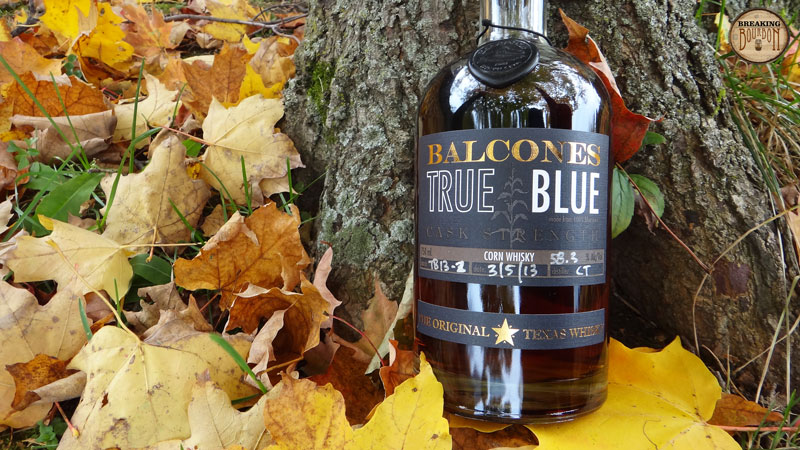