Distillery: Sourced from undisclosed distilleries in Indiana, Tennessee, and Kentucky

Barrell Vantage is a new ongoing release from Barrell Craft Spirits. According to the company, in order to create Vantage the team has “drawn on years of experience with three-part barrel finishing, used previously in Armida, Dovetail, and Seagrass. With Vantage, those same techniques were applied to the oak itself, using different char levels, toast levels, and oak origins to create a multidimensional blend. Each component whiskey in Vantage is finished separately, then systematically combined according to a blending process fueled in equal parts by a scientific approach, experience, creativity, and experimentation.” As noted in the press release, “this process focuses on the wood characteristics and the specific flavor contributions that each cask contributes to the blend.”

‍‍While the product will not have batch designations and is intended to be relatively consistent, the bottles currently in the marketplace all originate from the first batch with the second batch expected to reach market sometime in October. Gray Label and Gold Label versions of Vantage are not confirmed yet, but according to company founder Joe Beatrice potential releases might be expected sometime in 2023.

Peaches and orange peel combine with fresh dandelion to create a fruity-floral base. Crème brûlée and lightly toasted oak complement, offering dynamic interplay against the more fruit-forward backdrop. While a hint of heat is present, the scents lean into the lighter side of the flavor spectrum, making for an overall aroma that feels soft, light, and enjoyable.

The aromas from the nose transfer well into the palate, maintaining a fruity-floral base with additional flavors layered in. Peach is most prominent, and it’s accented by a mixture of fig, nutmeg, crème brûlée, tempered oak, and Cinnamon Toast Crunch cereal. The whiskey’s buttery mouthfeel delivers the flavors gently and substantially, though it drinks lower than its proof suggests. It’s a dangerously delicious palate that doesn’t offer much initial shock value, instead playing the long game with a marriage of flavors that amplifies on the backend.

Light nutmeg and a hint of fresh ginger set the finish in motion. Peaches, vanilla cream, and cinnamon graham cracker follow, held in place by an oak backbone. As the flavors fade, warming crème brûlée sweetness takes shape and increases with intensity. A touch of spice lingers. Its medium to long finish makes for a soothing end to a delicious, easy-drinking sip.

Vantage shares similar roots with Dovetail, Seagrass, and Armida in the sense of blending finished whiskeys together to create a unique, ongoing product. Similar to Armida, but unlike Dovetail and Seagrass, Barrell Craft Spirits set out to build Vantage on a bourbon base. According to Beatrice, Vantage is a very intricate blend that is the result of approximately three years of experimentation, which includes about 2 years of more specific product development. In addition to variations in the finishing wood used, the base bourbons’ ages and mashbills were varied, resulting in a matrix that includes hundreds of variations. This included bourbons originating from different distillers in different states, and different finishing barrels, including barrels with 36 and 48 month air dried staves as well as different toast and char levels. While the approximate weighted age is estimated to be somewhere in the 5-8 year range, age was not a driving factor for the blend. The outcome of the company’s experimentation was a total of six components, or microblends, that were then married at varying percentages to create the final product.

While on paper the individual components in Vantage aren’t exceptionally unique in and of themselves, the final product strays from familiar, in both the sense of bourbon’s typical range as well as what we have seen so far in the marketplace with respect to toasted oak finished bourbons. Beatrice noted this was the intent, as the company specifically set out to find new toasted finished bourbon territory that hadn’t been explored yet.

The fruit and floral notes against the more traditional oak-driven flavors makes for a bourbon that isn’t necessarily bold or surprising at first sip, but in a strange sense is both indisputably unique and immediately familiar at the same time - like a person you just met but feel like you’ve been friends with forever. It asks to be poured again and again, finding a sweet spot between uniqueness, intensity, and drinkability.

Barrell Craft Spirits has established themselves as one of bourbon and American whiskey’s most capable blenders, and Vantage showcases that quality like other releases before it. Coming together very cohesively, Vantage finds new ground in the bourbon flavor category, and given the variation in base components it’s surprising how well they come together. Vantage falls in line with Barrell’s pricing strategy and is priced similarly to Barrell Bourbon batches and other products such as Dovetail, Armida, and Seagrass. Given how well it comes together, the fact that it’s barrel proof, and most importantly that it combines a unique and meticulously curated blend of finished bourbons resulting from years of development, its price is better than fair.

Barrell Vantage offers a new spin on toasted bourbon finishing with a flavor profile that finds new and exciting territory.

Sourcing and blending whiskey has become increasingly common in the industry, and is sometimes met with reluctance from bourbon drinkers. While there is nothing inherently wrong with sourcing the base for products, many of the growing number of brands are simply similar to others on the shelf - distilled at the same place, same age, same mashbill, etc. Unlike many of the brands that may find and bottle whiskeys sourced from somewhere else, Barrell Craft Spirits has made a name for themselves by taking different component whiskeys and carefully blending them together to create products that are greater than the sum of their parts, making them American whiskey’s frontrunner when it comes to a practice that is more commonly associated with Scotch.

Over time Barrell has added a wide range of finishes to their product portfolio, and then pulled those together in more complex blends. Vantage is a result of this, and a result of the longest experimentation process Barrell has undertaken to date. What’s most notable about the product is its drinkability in the sense that it isn’t necessarily a bold sip, instead offering a more nuanced flavor profile that gets you coming back for pour after pour. Its complexity is subtle, but layered and so well integrated that it highlights Barrell Craft Spirits' ability to blend at a level above most others in the American whiskey space.

Buy Barrell Vantage at Frootbat
‍The sample used for this review was provided to us at no cost courtesy its respective company. We thank them for allowing us to review it with no strings attached.
360 video 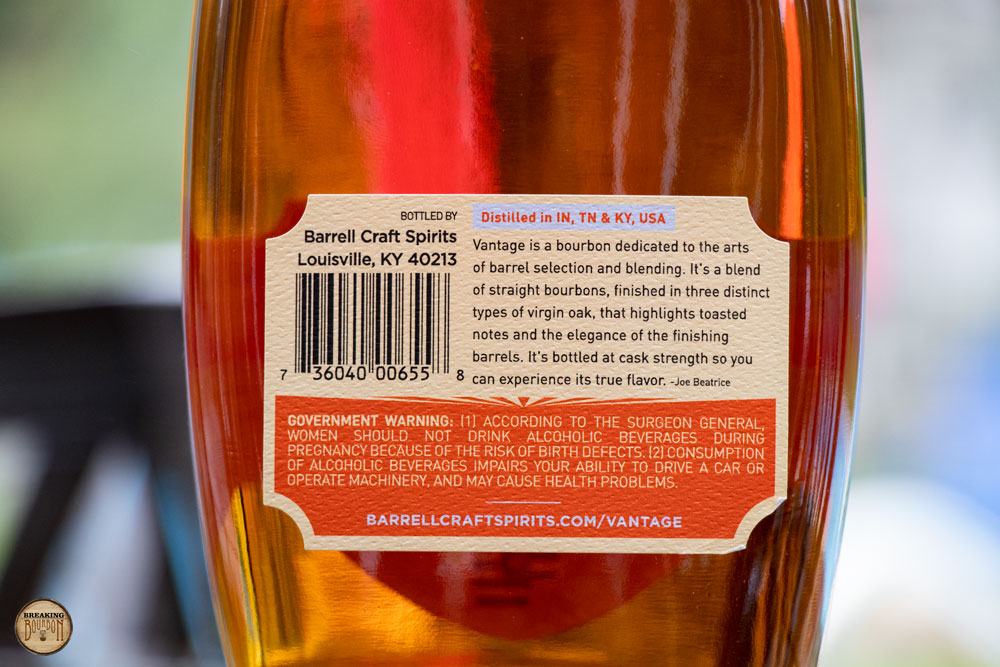