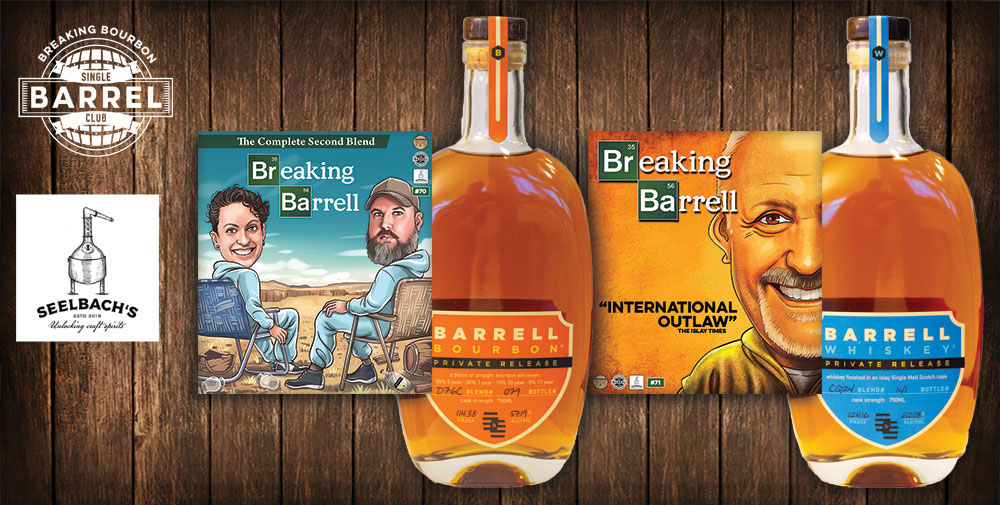 There are some barrel picks we get really excited about, and Barrell Craft Spirits is one of them. We arranged a visit to their location in Louisville, where we spent some quality time with the Barrell team that includes company Founder Joe Beatrice, Chief of Distillery Operations/Chief Whiskey Scientist Tripp Stimson, and Blender/Manager of Blending Operations Nic Christiansen. For the first time in quite a while, all three of us Breaking Bourbon Co-Founders were in Kentucky at the same time, and we were joined by long-time friend Ryan Cecil, Co-Founder of Bourbon Pursuit and Pursuit Spirits. This was one of those cases where it was as fun catching up with old friends as it was tasting a wide range of whiskeys, and putting the two together was even better.

We typically narrow down the options before starting a selection with Barrell - either focusing on a private blend, a true single barrel, or a subset of something else. In this case, we kept the options wide open. The Barrell team pre-selected a wide variety of whiskeys that ranged from single barrels from different states, a range of ages, to private blends and whiskeys finished in an Islay Single Malt Scotch cask, Barbados Rum cask, Cognac cask, and even a Boal Madeira barrel.

We could have easily gone with a number of the options presented, but decided to narrow it down to two. As the conversation unraveled we realized there was a strong (and unanimous) preference among the three of us to take two barrels, with one of them being a more straightforward bourbon and the other being a wild card.

For the bourbon pick, we really gravitated towards the private blends. The preeminent blender in the bourbon business, the Barrell Craft Spirits team is on top of their game when it comes to blending. We ultimately decided on a 114.38 proof blend of 55% 5 year, 30% 7 year, 10% 10 year, and 5% 17 year bourbons originating from three different states. Balanced, well-rounded, and plenty of character. An easy choice.

For the wild card, we had a bit more to talk about. We love cognac finished bourbons, rum finished are always fun, and Madeira can be really good too. But this one surprised us. The three of us rarely gravitate towards scotch, and while we enjoy one from time to time it can be a polarizing venture, especially for a bourbon-only drinker. The Islay Malt Scotch finished barrel knocked it out of the park. Starting as an ex-Maker’s Mark Bourbon barrel, it then aged Islay Scotch (exact source unknown), and then made its way back to the United States. The end result - a whiskey that is quintessentially American, integrating rich, more traditional American whiskey flavors with just the right amount of scotch influence to add layers of depth. We were unanimous on this one, and so it was done.

For the stickers we continued our parody that originally started with SBC #42. This time, we also featured Tripp Stimson and Nic Christiansen along with Joe Beatrice in an iconic two-sticker set. “Breaking Barrel: The Complete Second Blend” goes with the private bourbon blend pick, and “Breaking Barrel: International Outlay - The Islay Times” of course goes with the whiskey finished in Islay Scotch barrels.

For this pick, we partnered with spirits retailer Seelbach’s, which was founded by Blake Riber, also the creator of Bourbonr and the Bourbonr Facebook group. An online-only retailer with a twist, we interviewed Riber to discuss how he’s running his shop differently than everyone else. “Unlocking Craft Spirits” he calls it - seeking out up-and-coming craft distilleries and learning about their process and tasting through their products to find hidden gems.