Originally released in 2010, Maker's Mark 46 starts off as standard Maker’s Mark, which is a wheated bourbon made in batches of less than 1,000 gallons. Then, ten heavily seared French oak staves are placed in just-emptied standard Maker's Mark barrels, which are then refilled and returned to the warehouses to finish aging for an undisclosed amount of time (estimated to be 2-3 additional months).

‍‍Over the years the brand has seen small tweaks, such as going from being called Maker’s 46 to Maker’s Mark 46, and in March 2022, the company released a newly redesigned bottle for the bourbon. According to Maker’s, “the new design puts the uniqueness of the liquid on full display, differentiating itself in the proprietary French oaked process that gives Maker’s Mark 46 its characteristic layers of faceted flavor. While the bourbon inside the bottle remains the same, the new bottle design reinforces consistency of the brand’s visual identity and more tangibly brings to life its premium legacy.”

Maker’s Mark 46 fully embraces its use of French oak staves with decadent charred French oak and cinnamon raisin toast mingling with classic scents of vanilla, brown sugar, and light caramel. A slight hint of crème brûlée adds an extra dollop of rich sweetness. Combined, these scents provide for a delightful opening with a nice amount of balanced depth.

The sweet notes carry over in the form of sickly sweet syrup, burnt cinnamon toast, and hints of caramel. Where the nose displayed the use of French oak staves, the palate goes all in showcasing an oak-laden presence consisting of heavily charred and aged oak. There’s a pop of spice present but overall the wheat in the mashbill helps keep it at bay and provides for an even-keeled expression. It’s not as rich as the nose, but it’s still nicely balanced overall.

A large pop of spice kicks things off along with a healthy dose of heavily charred oak and dabs of dried leather and tobacco leaf. As the flavors drop off, you’re left with a lingering heat and a dried leather note. It’s a perfectly fine ending, but nowhere near as robust as the rest of the sip, which leaves you wanting for a bit more from it.

Initially marketed as just Maker’s 46 Maker’s Mark 46 has been a staple of the Maker’s Mark brand for over 10 years now. Originally introduced as a more premium version of the standard Maker’s Mark, the product line has gone on to see a thriving private select program, a cask strength version, and serves as the base idea for the company’s annual wood finishing series. One of the key aspects was that Maker’s Mark 46 had a different bottle design versus the standard Marker’s Mark. Taller with broader shoulders the bottle prominently stated 46 and stood out on shelves, carrying an intriguing and premium feel to it.

With its new bottle design, Maker’s Mark 46 gravitates to the brand's standards. Gone is the unique bottle design that stood tall, instead now sharing the same bottle that the standard Maker’s Mark uses. They also switched to a paper label prominently featuring a gold foiled "French Oaked" and "Bill's Recipe" while shrinking the  46.  Additionally, it has gone from a corked bottle to a screw top; a perplexing move for sure. Whether or not the cask strength, private select, and wood finishing series bottles eventually gain a similar redesign has yet to be seen, but for now, Maker’s Mark 46 lost a little bit of its specialness that helped it stand out on shelves.

What hasn’t changed though is the bourbon inside. When I first reviewed Maker’s 46, I found that Maker’s 46 took the beloved Maker’s Mark flavor profile and amplified it in all the right ways through a very unique twist on barrel finishing that had previously not been seen elsewhere in the industry. Since that time however, stave finishing and also French oak barrel finishing has become more and more common. While still unique compared to the standard Maker's Mark, what once was Maker’s Mark 46’s most distinguishing and unique aspect, has now become a little less so.

Maker’s Mark 46 had an above-average value when I first reviewed it in 2015. Since that time, the price of Maker’s Mark 46 has shockingly stayed the same. A wheated bourbon that has a French oak finished aspect for $40 comes across as a solid value in today’s marketplace. So many times in life when a brand has a redesign, companies use it as an excuse to raise the price. In this case, Beam Suntory should be given credit for holding the line and keeping Maker’s Mark 46 at its long-standing price point. The bottle may have lost some of its pizzazz with the change to the more standard looking bottle, but maybe that was a necessary cost saving measure to keep the price point the same. Most importantly, the bourbon inside is every bit as good as it was before. At $40, this is a no-brainer bourbon to keep stocked at home.

Even with a more subdued and standardized bottle design, Maker’s Mark 46 still manages to take one of the most iconic bourbon brands in the world to the next level.

When I first reviewed Maker’s 46, I stated that everything about it seems to be more refined than the standard Maker’s. A large part of this was the sophisticated looking bottle that broke away from the iconic square influence of Maker’s brand. With the new Maker’s Mark 46 bottle design being reined in and now sharing the same design as standard Maker’s, the bourbon stands out just a little bit less on the shelf from a purely aesthetic standpoint. Thankfully the bourbon inside remains exactly the same.

Beam Suntory should be giving credit for the influence Maker’s Mark 46 has had on the industry. While barrel finishes have become more common, we’re also starting to see a large uptick in stave finishing too. More so, French oak finishing has become more and more popular. All that’s to say Maker’s Mark 46 delivers a well-rounded sip that laid the groundwork for French oak finishing done right. It elevates and stands out from the standard Maker’s Mark, delivering a rich sip that while starting stronger than it ends, is still enjoyable nevertheless. Add in that it carries a very reasonable price point, and Maker’s Mark 46 is a bottle that all bourbon drinkers owe themselves to try at least once. Even if it happens to stand out a little bit less on their bar thanks to the redesigned bottle it comes in.

Buy Maker’s Mark 46 Bourbon at Frootbat
‍The sample used for this review was provided to us at no cost courtesy its respective company. We thank them for allowing us to review it with no strings attached.
360 video 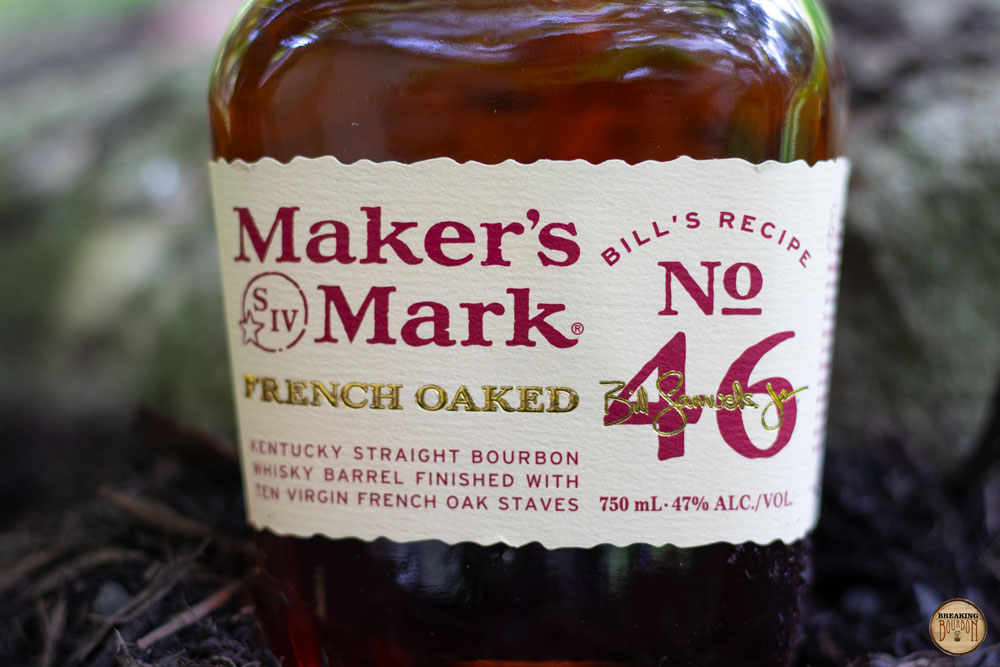 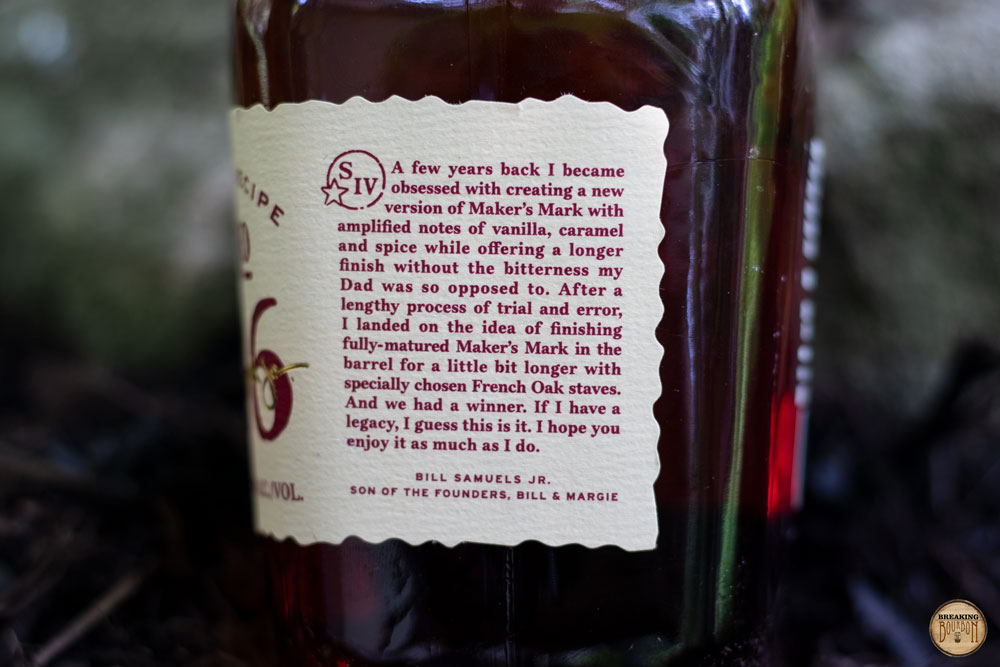 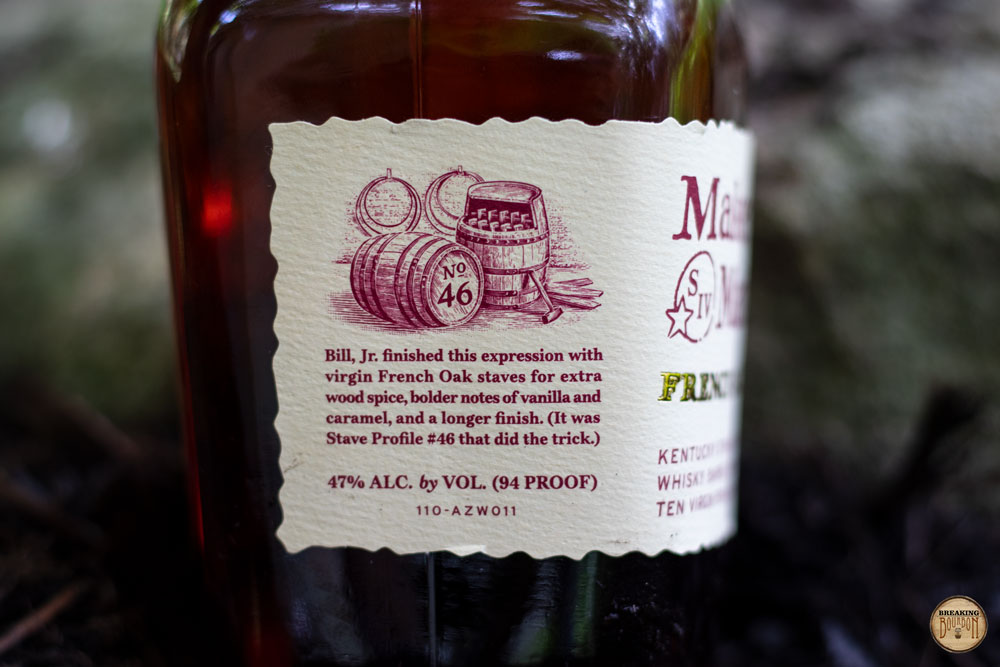 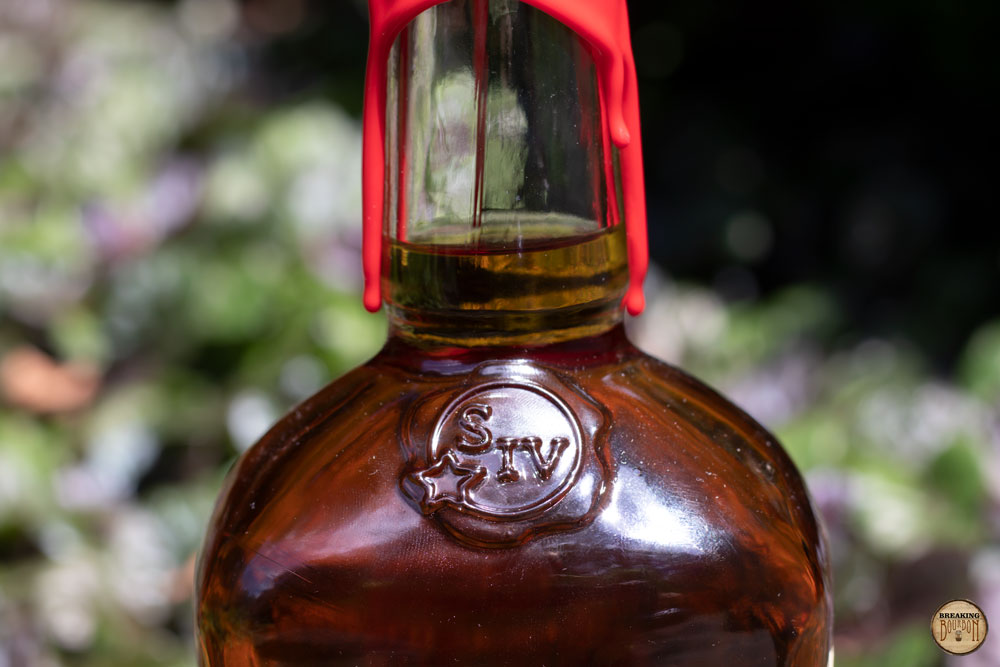