‍‍Kentucky Owl Takumi Edition is a collaboration with John Rhea, Kentucky Owl’s master blender, and Yahisa Yusuke, Japanese whiskey master blender for Nagahama Distillery in Shiga Prefecture, Japan. John Rhea started his career in whiskey at Four Roses Distillery right out of college, eventually working his way up to Chief Operating Officer and then retiring in 2016 after 40 years with the company. Rhea also served on the board of the Kentucky Distillers’ Association for 17 years. He joined Kentucky Owl as master blender in 2021. Yahisa Yusuke is much newer to whiskey blending, but proving to be an up-and-coming blender to watch.

‍‍According to the company’s press release, “ this latest limited edition release blends new and old, showcasing Kentucky bourbon through the eyes of Japanese whisky. Both Kentucky and Japan are home to whiskey lovers who respect tradition and craftsmanship, but who also admire innovation. The Japanese term kaizen — continuous improvement — echoes through this latest project. "Takumi" means "master" [or “artisan”] in Japanese, with the name of the release celebrating the art and craft of modern whisky blending. Rhea and Yahisa worked together to create the resulting Takumi Edition blend, with Rhea selecting four different formulations and sending the samples to Japan. Yahisa evaluated those samples, which represented different ages and mash bills available from Kentucky Owl®. Yahisa then created different blends with those formulations to develop one most reflective of his Japanese whisky style.”

Fresh baked bread, light caramel, and summer fruit greet the senses. Light fennel adds depth, which is complemented by a touch of tobacco leaf and light seasoned oak that add a layer of complexity. If you could describe an aroma as smooth and savory, this would be it. Not at all punchy, it’s a satisfying but even-tempered nose that’s content resting on its laurels.

Rich and full-bodied but never overpowering, flavors of oozy caramel and buttery cinnamon cake are complemented by fresh apple pie crust. Hints of dry leather and light oak layer in, adding a savory dimension. While the sip lacks an immediate WOW factor, it brings waves of complexity and a well-rounded mouthfeel. Like the nose, it trades an in-your-face punch of flavors for balance, taking a “less is more” approach, delivering on it and then some.

Cinnamon spice takes a stronger form, intensifying but once again, never overpowering. Waves of caramel and raisin follow, accented by savory seasoned oak. Balance is on point here, as the finish melds everything together, amplifying spice to a pleasing height, and tapers off nicely. Expected, balanced, and a nice ending to a well-rounded sip.

Kentucky Owl has created a premium name for itself, which led to the company’s sale to Stoli Group in 2017 by the company’s modern founder Dixon Dedman, the great, great, grandson of the original founder, C.M, Dedman. During Dixon Dedman’s tenure and thereafter, some Kentucky Owl whiskeys reached near cult-status, and with the acquisition by Stoli Group, plans for a $150 million “Walt Disney like” Kentucky Owl Park are underway.

The collaboration between Rhea and Yusuke worked asynchronously - Rhea formulated four blends representing different ages and mashbills, which were sent to Yusuke to further blend, applying his Japanese whiskey style of blending to the base formulations. Blending a range of whiskeys to create a final product is commonplace in Japanese whiskey - with much of the attention on the blend and each of the components treated more like an ingredient that is intended to be used as a component of a finished product. While bourbon is seeing increased attention to blending, it has been historically different, with a much greater focus on creating products that are intended to be good as-is…possibly as a single barrel but also blended with barrels intended to deliver the same flavor profile. It’s fitting that Four Roses Distillery, Rhea’s former employer, is somewhat of the exception to this, at least as Kentucky major distilleries go. They use two mashbills and five yeast strains to create ten deliberately different bourbon flavor profiles. Their entry-level Four Roses Bourbon uses all ten recipes, with the intent of taking different component parts of each to create a cohesive end result.

It’s clear that the intention with Kentucky Owl Takumi Edition was to create a cohesive blend, that was very much bourbon, but also very much influenced by a style of blending that intended to create a well-balanced product. This is where Takumi Edition shines, because it really does succeed in what its makers set out to do. Its balance from start to finish, even-tempered delivery of flavor and potency, and well-rounded mouthfeel are all traits that may not WOW you immediately, but when combined, they stand out and really shine. It’s a final product that I can’t imagine anyone who likes bourbon wouldn’t like, and some might even love. It doesn’t have a unique barrel finish, it’s not a barrel proof monster, and while it does contain bourbons distilled from both rye and wheat focused mashbills, that’s not the point. Takumi Edition is as far away from polarizing as you can get, but at the same time noticeably more cohesive than most bourbons on the market.

While the product is 100% Kentucky straight bourbon, the packaging has a very obvious Japanese feel and style to it. The ages of whiskeys in the blend include 4, 5, 6, and 13-year-old bourbons, but percentages aren’t disclosed. It’s also a fairly large limited release, at 25,000 bottles.

At $150, the price isn’t surprising for a Kentucky Owl product, given their pricing for past releases of St. Patrick’s Edition at $135 (2022) and Confiscated at $125 (2019). I always like to see more specific details, but it’s clear Kentucky Owl is telling us as much about the details of this blend as they would like to. Given the infusion of higher end Kentucky-sourced bourbons recently that include a focus on age, blending, or both from Calumet Farms, 15 Stars Bourbon, Lucky Seven, Kentucky Senator, Blue Run, and plenty of others, Takumi Edition lands on the higher side of the price scale when considering just age and proof, and you have to consider the fact that the percentages (by age) in the blend are not disclosed. Applying weight to its overall balance brings it up a notch though, as it’s arguably equal or more balanced than the comparisons.

Still, $150 is a bit too high, and as a result we are seeing retailers reduce the price on this slightly to accommodate market demand and what I assume feels like a fairly robust supply in their inventory systems. I think it’s a buy around $125, and would recommend pulling the trigger if you find it at that price and can afford to splurge.

Taking America’s Native Spirit and applying a Japanese style of blending to it, Kentucky Owl Takumi Edition is a masterpiece in artful blending.

As the bourbon and American whiskey market expands, distillers and producers continue to create new products to get consumers’ attention. With the risk of being relegated to merely a gimmick, ultimately the brands have to take a leap of faith, and the market gets to decide. While applying a unique finish or focusing on high age or a unique mashbill (or blend of mashbills), can garner attention and get into new flavor territory, Takumi Edition takes the opposite approach. Focusing on maintaining a traditional bourbon flavor profile and delivering it in an even-tempered manner that’s laser-focused on balance and drinkability, Kentucky Owl Takumi Edition is a bourbon that succeeds in showcasing what focusing on blending and the blenders who create them can produce.

Buy Kentucky Owl Takumi Edition at Frootbat
‍The sample used for this review was provided to us at no cost courtesy its respective company. We thank them for allowing us to review it with no strings attached.
360 video 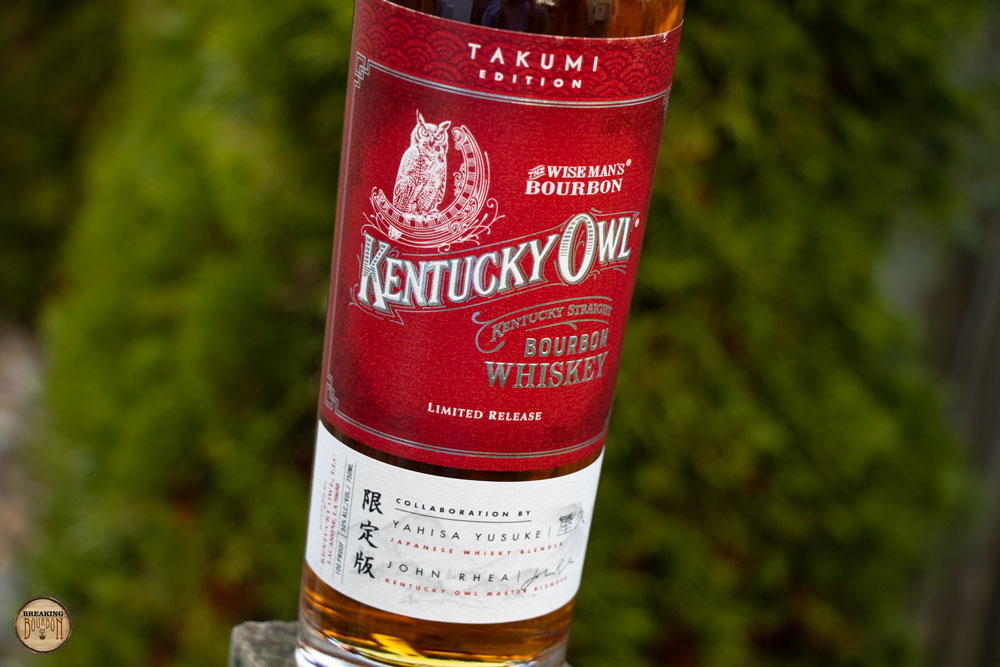 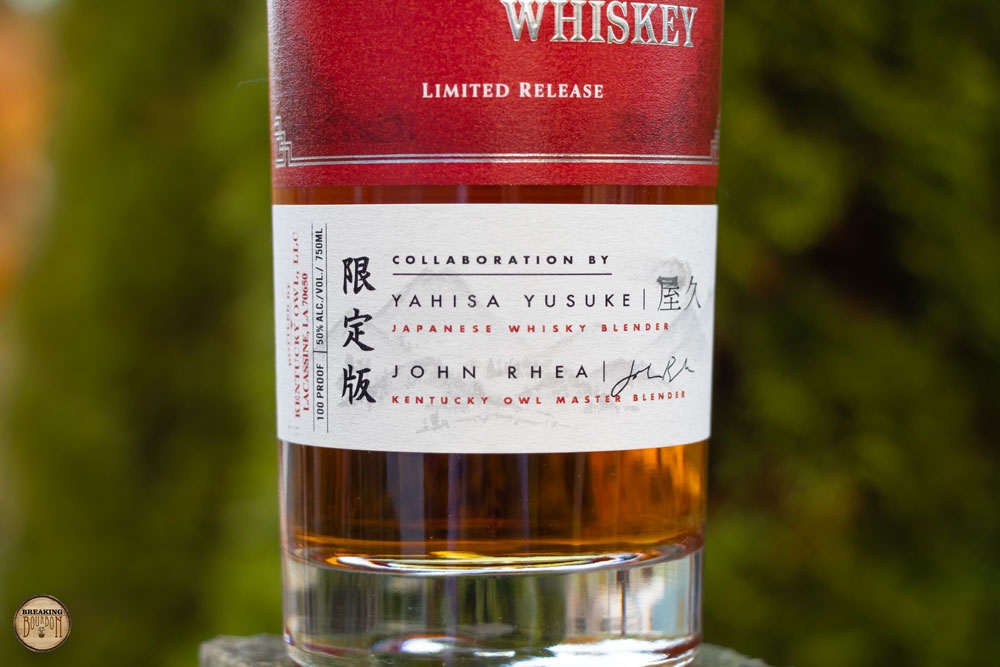 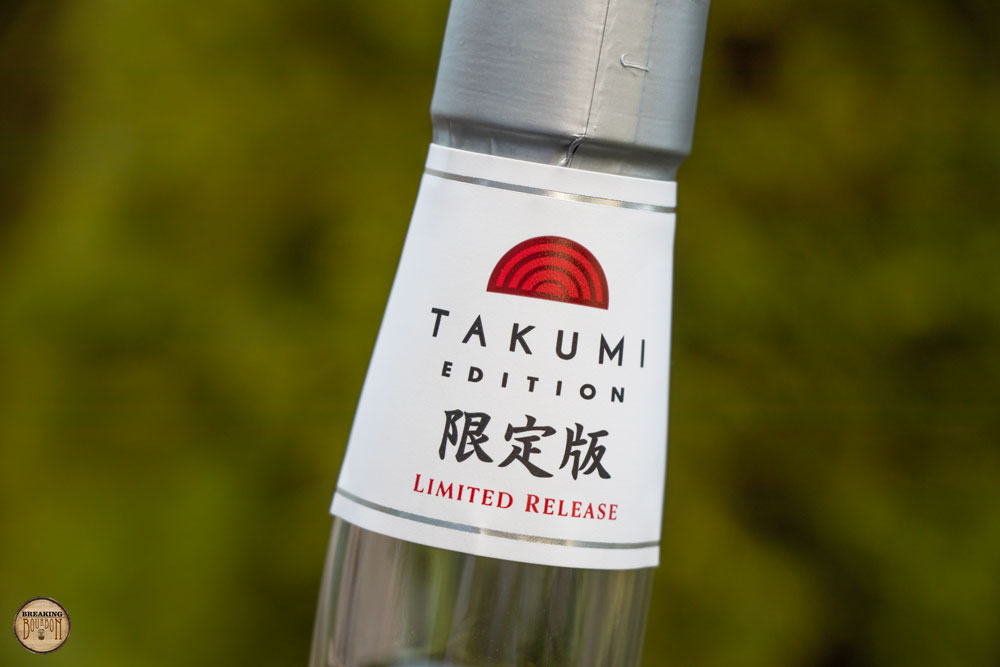