‍‍According to master distiller Chris Fletcher, Jack Daniel’s “wanted to create a unique malt whiskey” with this release. Jack Daniel’s started distilling single malt in 2013, and ultimately went with a “plumper, high protein malt,” but was otherwise non-specific on the type of malt. The particular barrels chosen for this release were distilled in 2015, and when tasted years later were “missing sweetness and richness” according to Fletcher. Oloroso sherry cask (butt) finishing was identified as a means to make the whiskey sweeter and richer, and Jack Daniel’s purchased approximately 330 of them at over $1,000 a piece. Oloroso sherry casks are large, coming in at 132 gallons, which is nearly 2.5 times the size of the 53 gallon barrels typically used in the United States to age whiskey. Because of their size, they didn't fit in a standard rickhouse and had to be palletized for storage, stacked up to 7 high on their heads. For this release, the Oloroso sherry casks were first-fill. The whiskey was moved from the original barrels to the sherry barrels in January/February 2020, and then aged in the sherry barrels for approximately 2.5 more years. In terms of the overall vision for this release, Fletcher said “it was never about trying to recreate what they’re doing in Scotland.” Going forward, Fletcher notes, “There will be more interesting things coming from us.” Going on to say, “[we] still have a few thousand barrels of malt aging right now in different areas of the rickhouse.”

‍‍Jack Daniel’s anticipates adding a malt whiskey to its permanent lineup in the summer of 2023.

The nose greets you in a surprisingly soft sort of way considering its 100+ proof point. Both the Lincoln County Process and the Sherry Cask finishing are evident as scents of red berries and vanilla initially step forward, along with a light peppercorn spice. Inhaling deeper brings forth aromas of sweet malt, sweet chewy caramel, and maple wood. Its gentleness makes you really sit and concentrate on what’s in the glass, but when you hone in on the scents, they reward you with their layered complexity. I wish the nose had a bit more oomph to it to help it excel a bit more, but what is present is still very well done.

Much like the nose, the sherry cask finish makes its mark on the palate. Malt, cocoa powder, vanilla, and sherry swirl forward. Wading past these flavors reveals additional components of peppercorn spice, light maple, and a dab of charred oak along with a touch of cherry. The mouthfeel is neither thick nor thin, instead providing a layer of doughy dry vanilla sherry as you work your way through it. Overall it’s well-composed and makes for a nice midpoint of the sip.

A dash of chewy oak kicks things off. Resting on top of a layer of heat are notes of dry fruit, a touch of sherry sweetness, dabs of white peppercorn spice, charred oak, and a hint of earthiness. As the flavors fade, you’re left with a sweet charcoal and doughy sherry note that is lifted by a lingering heat which allows this finish to have staying power. While it doesn’t live up to the same level that the palate brought forth, it’s still a good way to end the sip.

American single malt still makes up a fraction of the overall American whiskey market. However, while still small, a clear focus has been made on the category as more distilleries begin to focus their efforts on American single malts. While this isn’t the first time that Brown-Forman has dabbled in malt whiskeys, as Woodford Reserve Straight Malt Whiskey can claim that fame, it is the first time that Jack Daniel’s has stepped into the malted category with a 100% malt mashbill.

Finishing a malt whiskey in a second barrel isn’t a new concept, nor is finishing malt whiskey in Oloroso sherry casks groundbreaking. While still uncommon it’s also not boundary-pushing, as several distilleries including Stranahan’s and Oldline just to name a few, have released their own variations already. What is unique about Jack Daniel’s Twice Barreled Special Release American Single Malt Finished in Oloroso Sherry Casks is the fact that on top of being barrel finished, it also undergoes Jack Daniel’s famous Lincoln County process.

Seeing how a 100% malt mashbill takes to that process in combination with the sherry cask finishing is really interesting. The end result is a malt whiskey that takes on layers of sweetness but is also very clearly influenced by the sherry cask finishing. Combining this fact that Jack Daniel’s hasn’t produced a 100% malted whiskey, or any single grain mashbill for that matter, in their entire history, affords Jack Daniel’s Twice Barreled Special Release American Single Malt Finished in Oloroso Sherry Casks just enough differentiation to be a unique malted whiskey that can hold its own in today’s market.

2022 seemed to be the year that distilleries pushed the boundaries of pricing. Sometimes it feels like a race for who can find the absolute ceiling that consumers are willing to pay, especially when it comes to special releases. No matter what you think of the brand or the whiskey they produce, you have to give credit to Jack Daniel’s for keeping their yearly special releases in affordable territory. They may not be the easiest to find, but at least they’re relatively inexpensive compared to their peers when you do.

Finished American malt whiskeys tend to usually range between $65-$120 dollars. Also noteworthy, malted barley is a fairly expensive grain, especially when compared to corn which must make up at least 51% of a bourbon’s mashbill according to law. Its limited availability aside, Jack Daniel’s Twice Barreled Special Release American Single Malt Finished in Oloroso Sherry Casks falls in the lower end of that price range. Additionally, its unique background and well-developed pour, make the asking price seem quite reasonable. Unlike other past Special Releases by Jack Daniel’s, I wouldn’t say this year's edition is necessarily worth it at a higher price tag, but if you can find it at MSRP, I would highly recommend picking up a bottle.

Jack Daniel’s first venture into American single malt whiskey provides a unique twist from the utilization of the Lincoln County Process and Oloroso sherry cask finishing, although even with its 100+ proof, it still leaves you wishing for a little bit more oomph.

Jack Daniel’s Twice Barreled Special Release American Single Malt Finished in Oloroso Sherry Casks isn’t necessarily groundbreaking from an industry standpoint. Sure fans of Jack Daniel’s will find the company’s first entry into the American single malt category, and a 100% malt at that, to be intriguing, but overall this isn’t the most boundary-pushing release by the brand this year, as that most recent honor goes to Small Batch Special Release Coy Hill High Proof. However, what it does bring is just enough of a unique twist to the American single malt category thanks to the incorporation of both Oloroso sherry cask finishing and the utilization of the Lincoln County Process. Thanks to these two influences, the end result is a sip that isn’t overly “malty” and will be easily approachable for whiskey drinkers who haven’t delved into the American single malt category yet.

It’s also not the strongest special release by Jack Daniel’s in the past few years, but it is one of the more interesting ones from a brand history standpoint. While people often wrongly claim that higher proof is better, in this case, I do feel that the whiskey would stand out more with an increase of 5-10 proof points. Ultimately, Jack Daniel’s Twice Barreled Special Release American Single Malt Finished in Oloroso Sherry Casks is a nice reminder that even though the brand could easily rest on the laurels of its storied history, its focus is on charging full steam ahead with constant innovation results in delivering a fun pour year after year.

Buy Jack Daniel’s Twice Barreled Special Release American Single Malt Finished in Oloroso Sherry Casks at Frootbat
‍The sample used for this review was provided to us at no cost courtesy its respective company. We thank them for allowing us to review it with no strings attached.
360 video 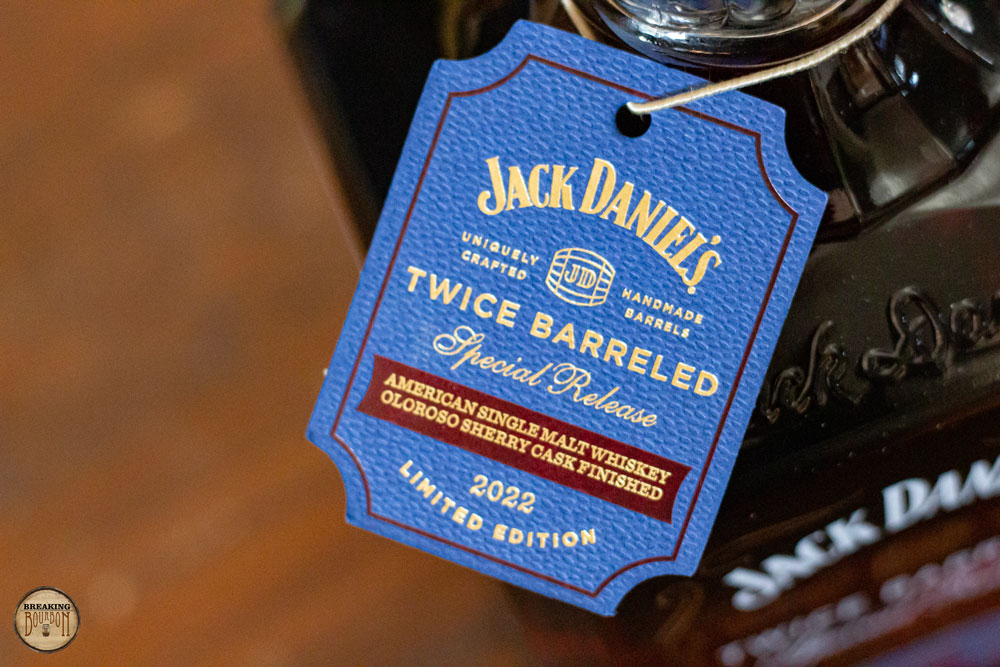 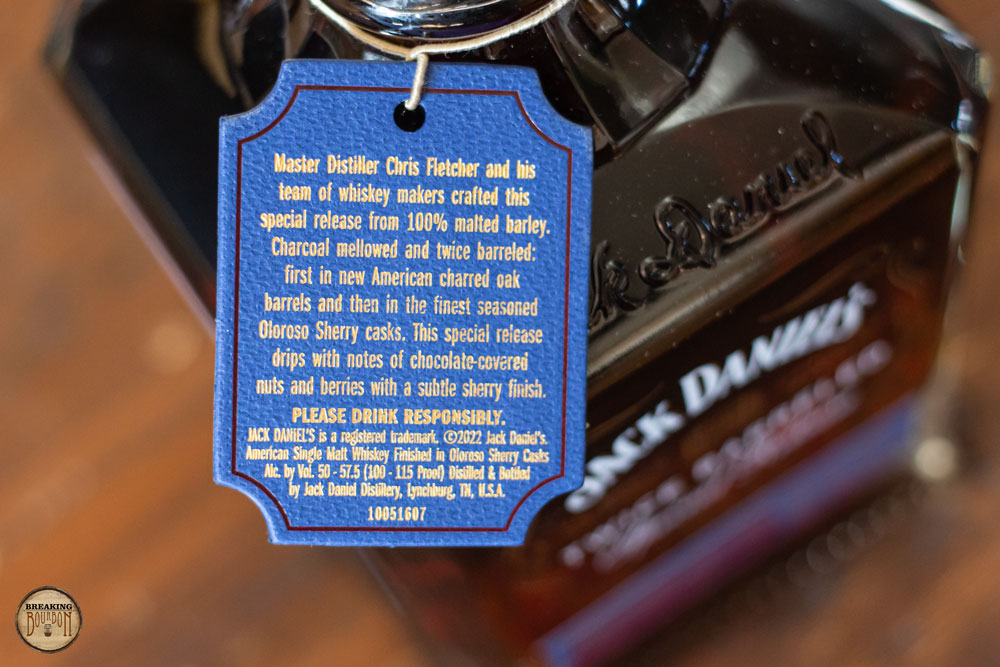 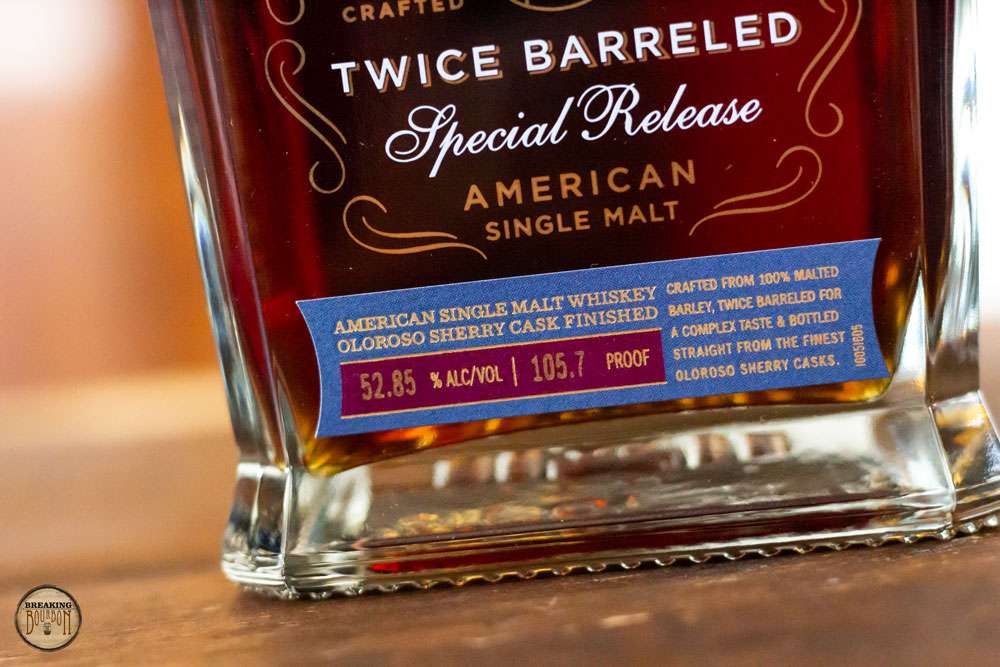 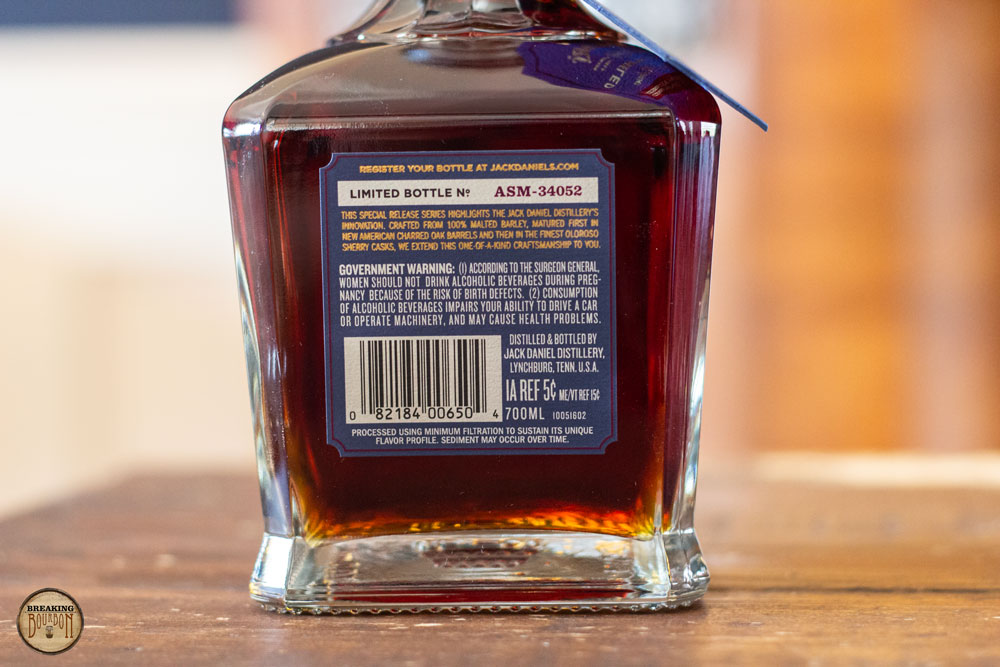