Blackened began as a project between the metal band Metallica and renowned master distiller, blender, and chemical engineer, Dave Pickerell. The base whiskey is a blend of bourbon and rye that is finished in black brandy casks for an undisclosed amount of time. The whiskey is also subjected to the company’s trademarked Black Noise sonic enhancement process, which uses specially made subwoofers that amplify low-frequency sound waves (featured in Metallica’s music) that, according to the company, “disrupts the whiskey inside the barrel, causing increased wood interaction that kicks up the wood-flavor characteristics in the whiskey.” The bottle is adorned with sound waves on its label that are from Metallica’s song, “Blackened.”

Dave Pickerell passed away just after the launch of Blackened in 2019. Former head distiller of Stranahan’s, Rob Dietrich, has since taken over the role as Blackened’s master distiller. The inaugural batch was labeled 081, to honor 1981, the year Metallica formed.

Blackened offers their Cask Strength Limited Edition whiskey as retailer “selects.” While you may see a store sponsor a specific batch, Blackened also releases them as state-specific batches, where any store has the opportunity to offer their state’s batch. Our review bottle is from Batch 115 and dubbed, “The Empire State Edition.”

Hard classic bourbon notes of vanilla, caramel, and oak draw you in. Potent, but far more delicate scents of plum, apple and a mix of dried fruits follow. The aroma as a whole is rich, but not overly aggressive either. It features just the right amount of warmth and sweetness, teamed with mild complexity to create a satisfying aroma overall.

A flavorful burst of fruity sweetness is warming as it is eye opening. It packs a punch, as robust notes of dark raspberry, blackberry, apricot, and supple plum make a lasting impression. This fusion of delicious flavors works well, and forms a cohesive and impressive sip. This is a flavor profile that hit its mark.

A pepper pop is followed by rich caramel, brown sugar, vanilla, and robust oak. Traces of the palate’s fruitiness linger, creating a layered aftertaste that is subtly different with each sip. It will depend on what your taste buds decide to pull out: more of the fruit found in the palate or more of the savory parts that appear in the finish. As a result, the finish is dynamic and constantly interesting, but still suffers from being a bit too hot at times.

I don’t doubt that many will find Blackened’s Black Noise sonic enhancement process gimmicky, but thanks to the renowned master distiller and blender Dave Pickerell’s involvement, it’s hard to completely disregard it. He was hired time and time again to oversee various industry projects, and continually proved he was a man that was not afraid of innovation and pushing boundaries to often great results.

Blackened’s Black Noise sonic enhancement is certainly one of the more “out there” innovations he was involved with. Working with metal band Metallica, the process and concept was a synergetic one, that from a branding standpoint, makes a ton of sense. With metal music bringing up thoughts of loud vibrating speakers, it takes a creative mind to take that and apply it to whiskey in a meaningful way.

Perhaps somewhat surprisingly, this “gimmicky” finishing process is a worthwhile one. The standard Blackened features an unexpected amount of refinement and a ton of flavor, especially for a 90 proof whiskey. With the cask strength version, these attributes are taken up a notch, yet also feature a more streamlined focus. With a better accent on its robust dark raspberry, blackberry, and apricot flavors, its overall baseline is nicely balanced, allowing its barrel finish to come shining through. Going higher proof doesn’t dramatically change the fundamentals of the brand, it simply shows a different side to its unique finishing process.

At a mere $9 over its 90 proof standard version, it’s hard not to lean towards the cask strength version if given the choice between the two. That’s not to say the 90 proof version doesn’t have something unique to offer on its own, but the marginal upcharge in price and its more punchy flavor will likely make people reach for the higher proof version if given the chance. With the cask strength release’s more limited availability (although not a limited release per se), it wouldn’t surprise me to see price fluctuation between stores offering it. With the standard Blackened already providing a great value for what it offers, the cask strength edition falls right in line, perhaps even going one step further. Beyond the names involved, its unique black brandy cask finishing, and of course its one-of-a kind finishing process, offering a cask strength version for so little more than their standard product is largely unheard of for a non-distiller producer. With its resulting quality pour and sweet and fruity flavor profile that many will likely find agreeable, Blackened Cask Strength packs in the value.

A jump in proof not only makes this unique whiskey more potent where it counts, it does so for a marginal markup over its lower proof brethren.

A cask strength version of Blackened is everything you’d expect it to be if you’re familiar with the 90 proof version. Because the black brandy casks used to finish the base whiskey already provide a wealth of dark fruit flavors, increasing the proof allows these great flavors to shine even more. The higher proof doesn’t reinvent the Blackened profile, but finds a nice complementary point to the standard release. With both releases providing something special in their own right, the company makes a compelling case that there's a reason for having both in your collection. That isn’t always true when it comes to other brands where their lower proof edition comes across as simply lacking, especially for seasoned drinkers. With that being said, most days I prefer Blackened’s cask strength version but it can come across as too hot at times getting in the way of its excellent palate. Despite this, it is still a welcomed ramp up of intensity for those who love the brand and it continues to showcase the agreeable flavor profile of Blackened whiskey.

Find Blackened Cask Strength Limited Edition (Batch 115) at Frootbat
‍The sample used for this review was provided to us at no cost courtesy its respective company. We thank them for allowing us to review it with no strings attached.
360 video 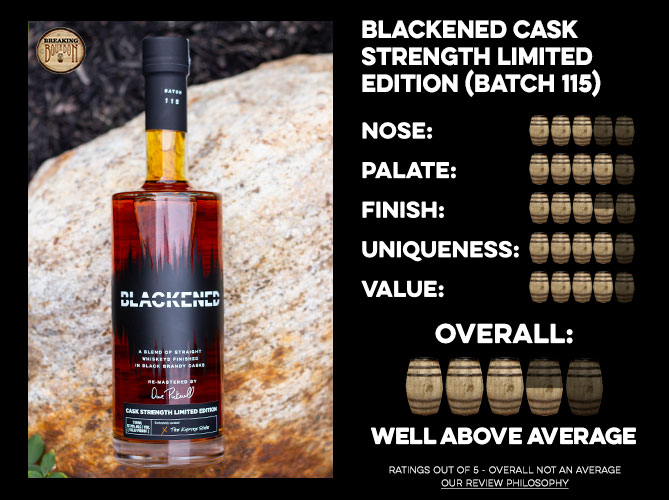 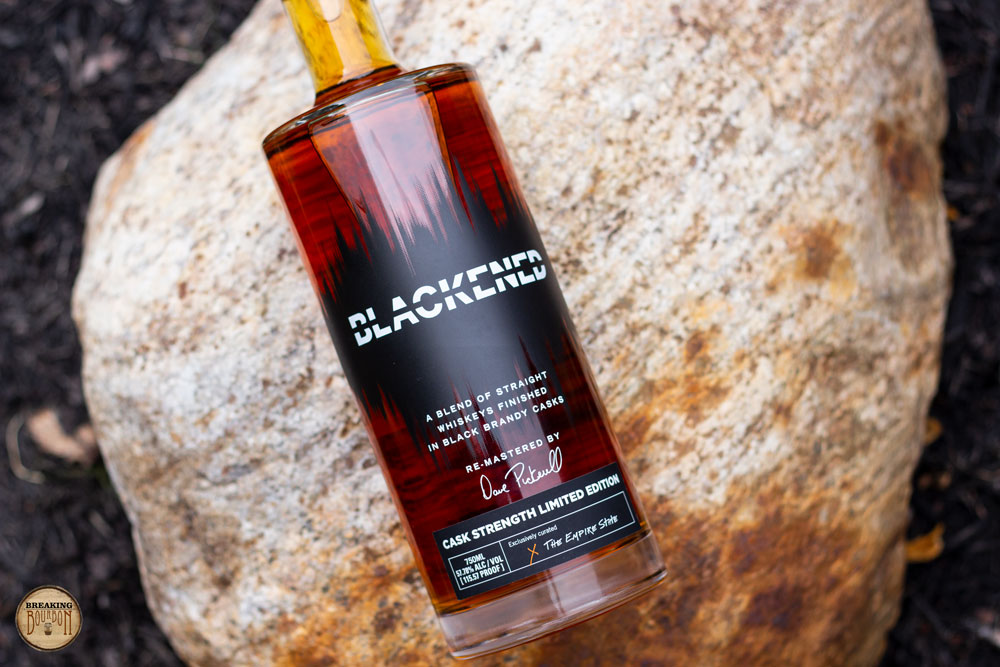 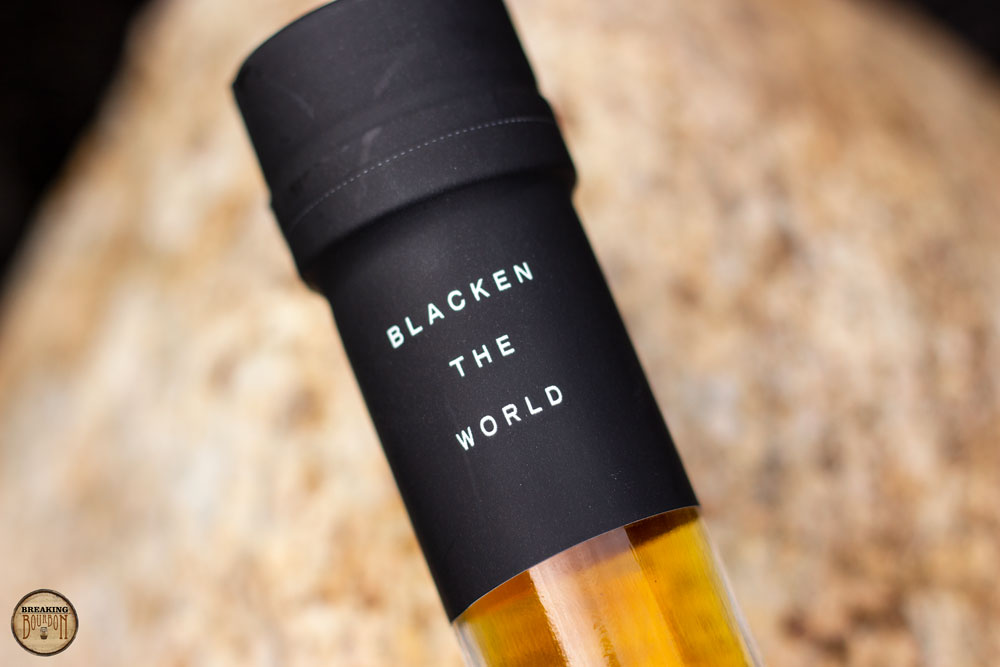 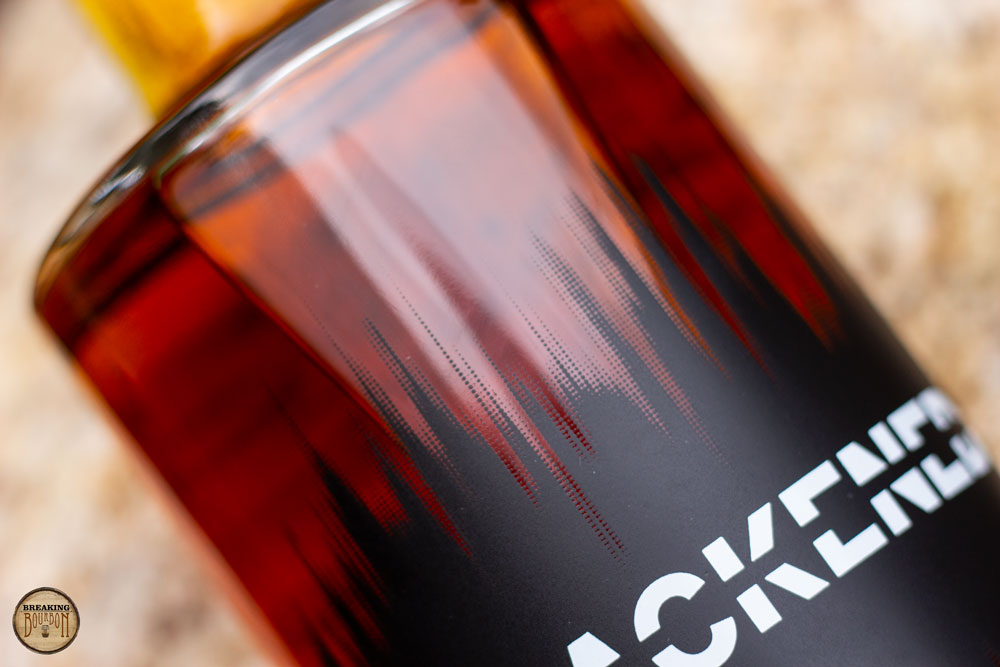 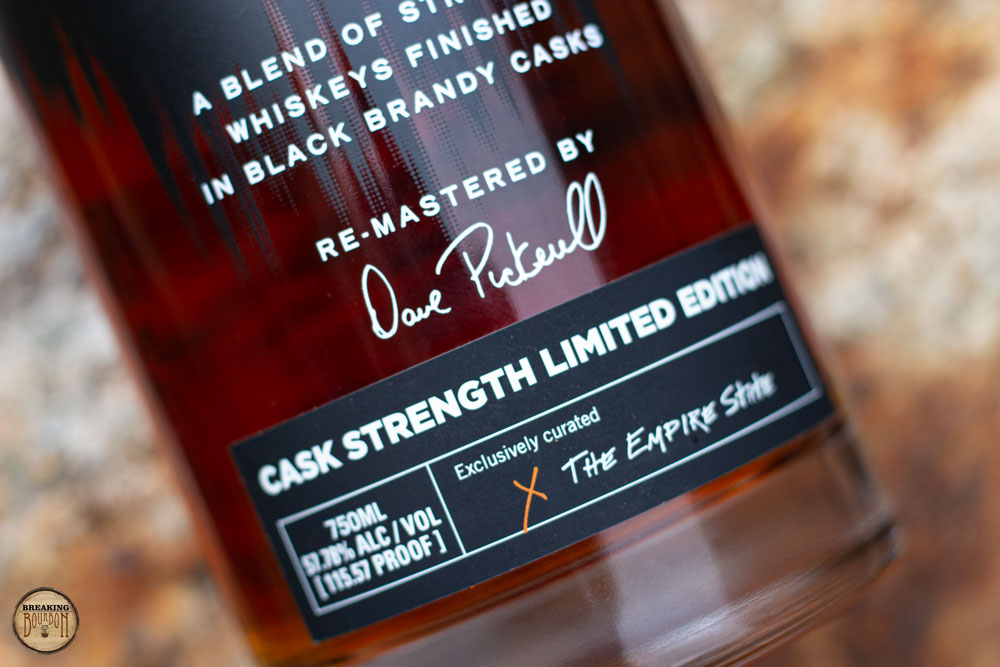 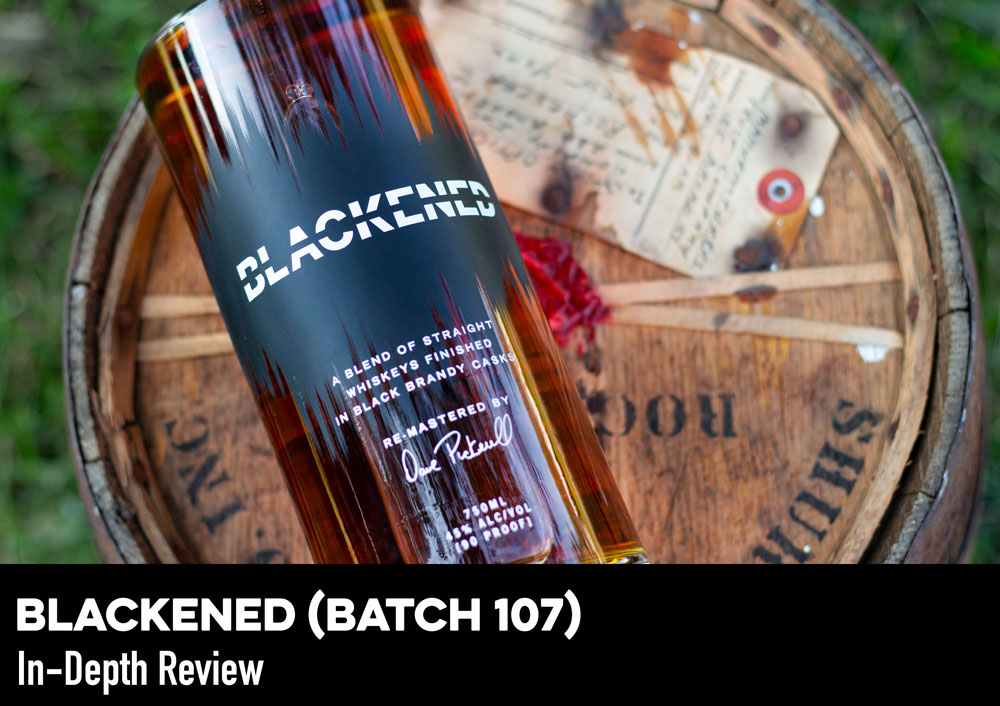 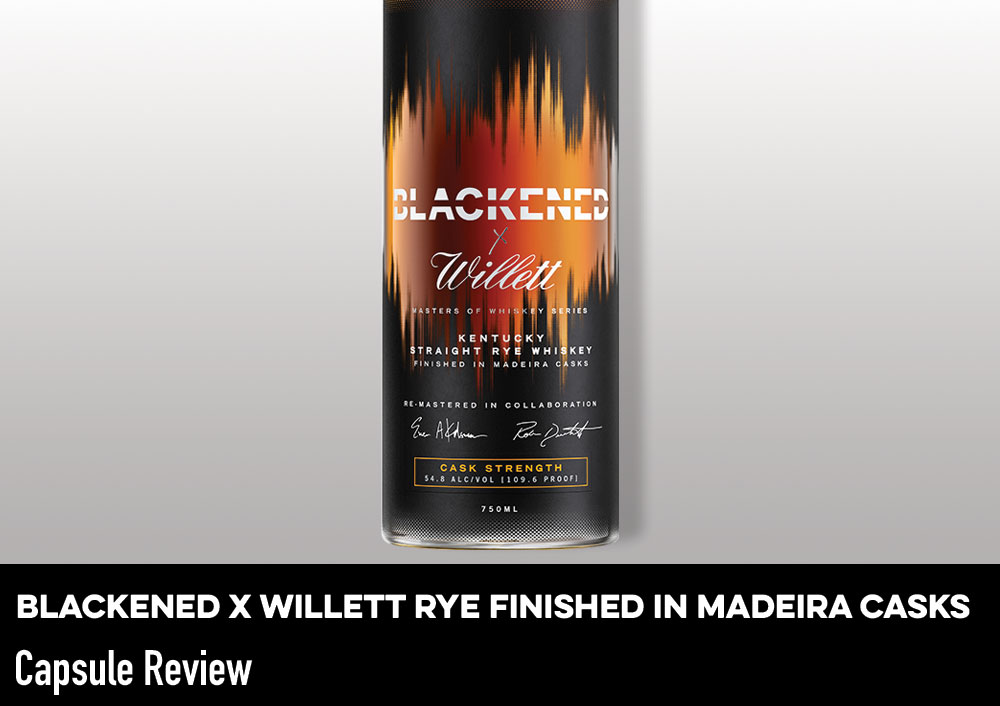 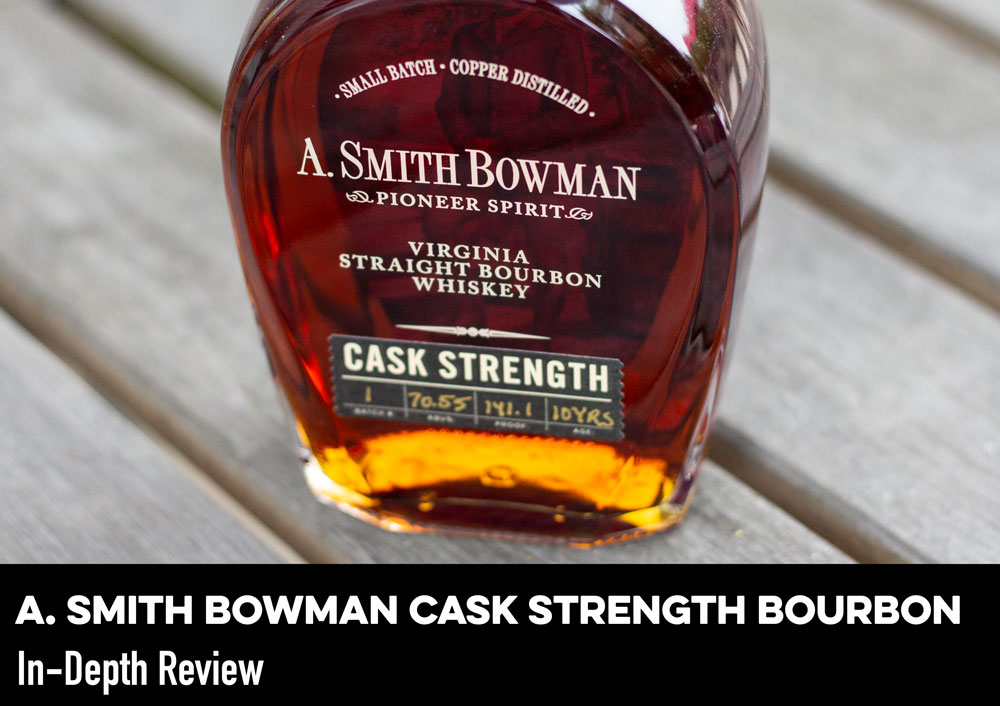