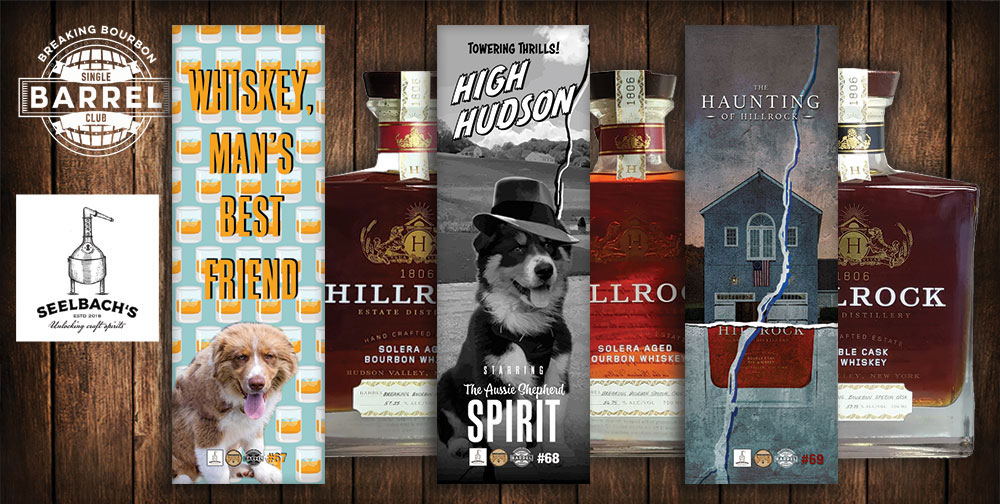 Classification: Solera Aged Bourbon Finished in an Oloroso Sherry Cask and then a Sauternes Cask

Classification: Solera Aged Bourbon Finished in an Oloroso Sherry Cask and then a Cognac Cask 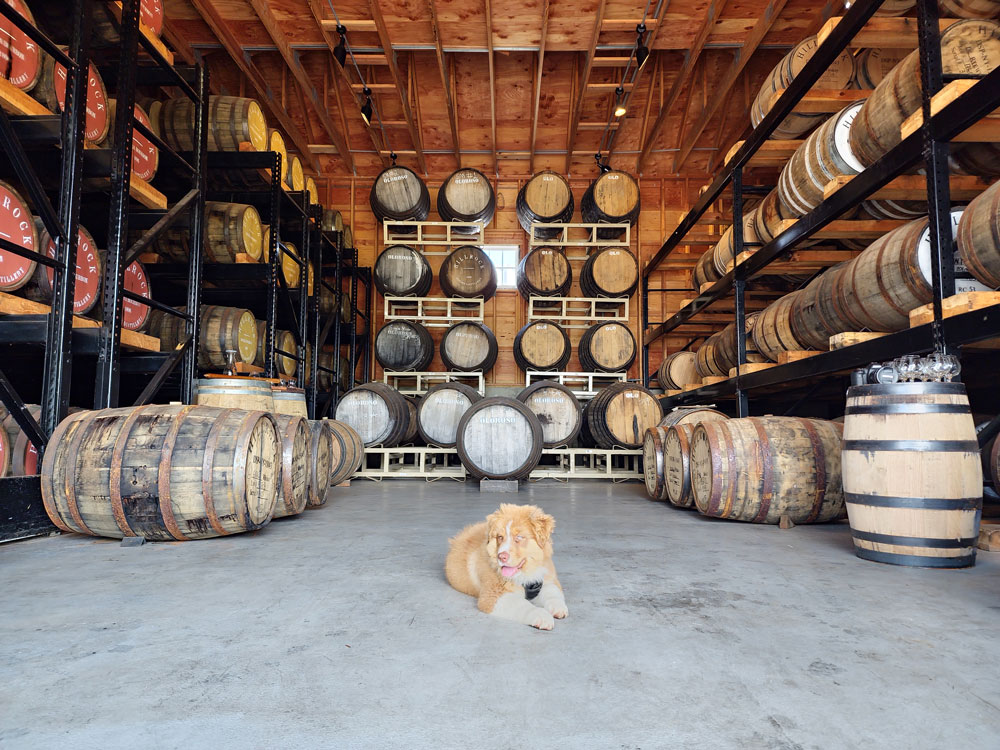 For those who aren’t familiar with Hillrock Estate Distillery, they are located in Ancram, NY, which is about two hours north of New York City. Hillrock made waves in the industry when they hired the late Dave Pickerell as their master distiller. After he moved on from Maker’s Mark, Pickerell looked for new projects and consulting opportunities, and Hillrock was one of his first and most hands-on projects he took on.

As the team at Hillrock explained it to us, Hillrock was a true passion project for Pickerell. When Hillrock owner Jeff Baker was getting his distillery off the ground the pair shared a common goal: make a truly authentic distillery. To accomplish this, they took the wine industry’s practice of terroir and applied those principles to whiskey. In doing so, they would explore how a region’s physical elements can affect the character of the products that are made from it. 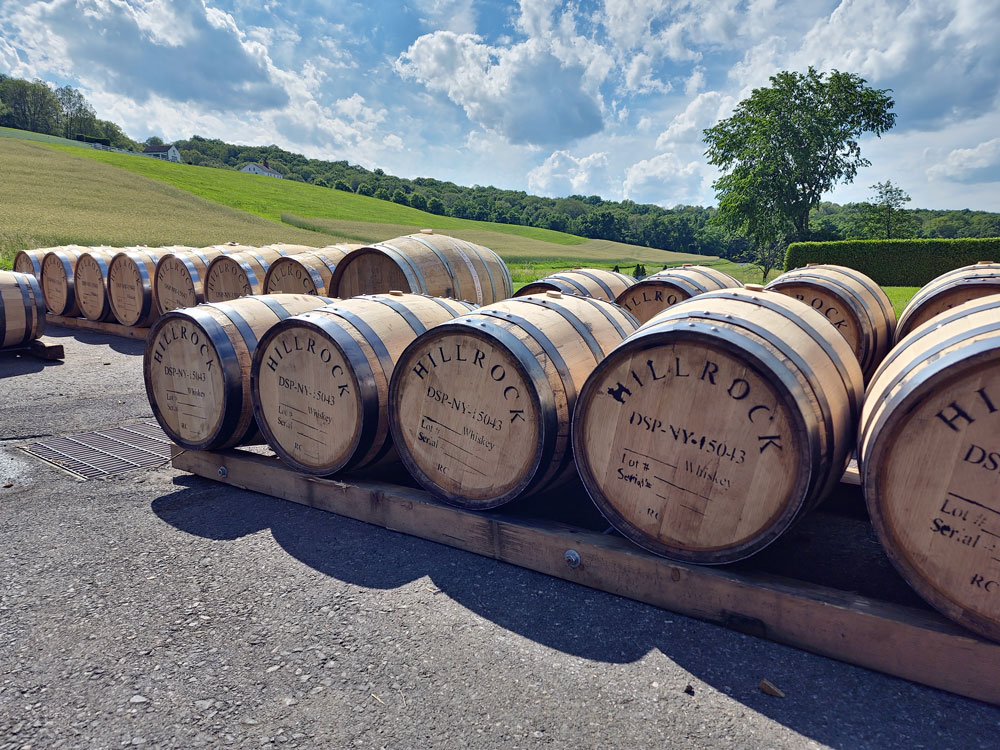 Nestled in the hills of New York’s Hudson River Valley, this farm distillery is a true “field-to-glass” production. All of the grains used in their product’s mashbills are grown on their property or immediate area near their distillery. Grains are grown without the use of pesticides and raised using sustainable, organic methods. The grain is then harvested, distilled, aged, and bottled all at their distillery. Even their malt is smoked in a replica Scotland smokehouse which is the first to be built in America since Prohibition.

Another notable aspect of Hillrock’s bourbon is their adoption of the solera aging process. They describe it as a stack of barrels where a small portion of whiskey is removed periodically from the final set of barrels in the solera, which is then replaced by removing some whiskey from the previous set of barrels, and then repeated through each set of barrels in the solera. No barrel is ever fully emptied, and age and complexity gradually increase over time. In its final stage, the solera aged bourbon is finished in 20 year old Oloroso sherry casks to balance the flavors and add layers of complexity. 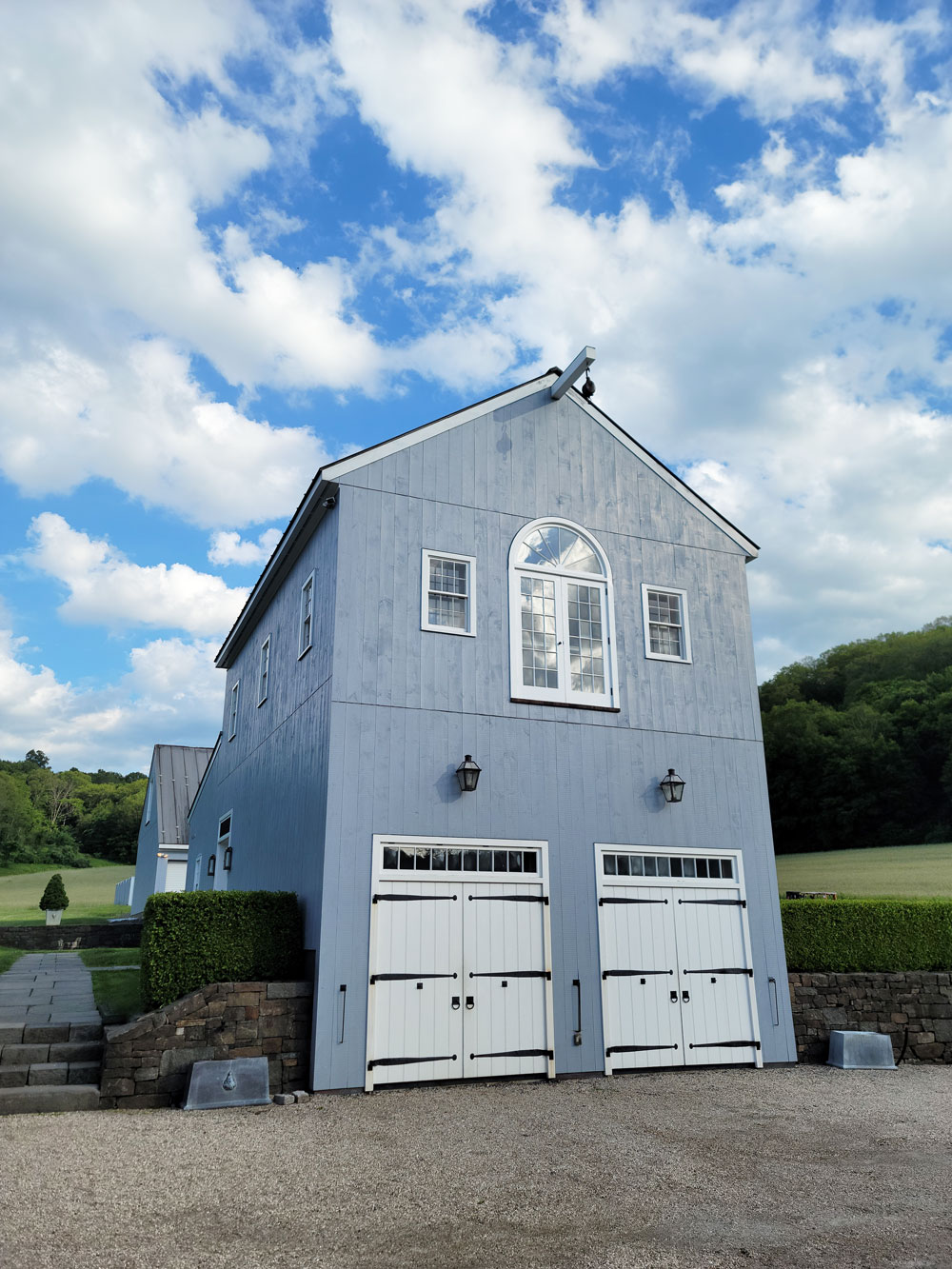 We selected a barrel of Hillrock Estate Distillery Solera Aged Bourbon back in 2019, “Hudson Confidential”, which was our 8th single barrel pick, and took Gold in the San Francisco Spirits Competition. For that pick we debated Sauternes finishing because we had tried samples that were so good, but we liked the barrel so much as-is we decided we would make a Sauternes finished bourbon our next Hillrock Estate Distillery pick. It took us three years to get back to the distillery, and Sauternes finished solera aged bourbon had been on our minds since our first visit. Let's just say we weren't leaving without one this time…

For the Sauternes and Cognac finished bourbons, the bourbon starts as solera aged bourbon. Because the solera includes portions of basically every bourbon ever added to the solera, the exact blended age is unknown though it is estimated to hover around an average of about 8+ years when considering age by percentage in the overall solera mix, which contains bourbon aged as much as approximately 12 years. The final step in the standard solera process is aging in huge ex-Oloroso sherry casks, which come in at 500 liters, which translates to about 132 gallons, or about 2.5 times the size of a standard 53 gallon bourbon barrel. This final step rounds out the flavor profile, giving the bourbon depth, consistency, and typically dark fruit notes which we really enjoy.

For these picks, we tasted a lot of barrels at the distillery. If you have not had Hillrock Estate Disillery’s whiskeys at cask strength yet, you really have not experienced the depth their whiskeys have to offer. Tasting a wide range of whiskeys directly from barrels gives you a sense of just how much range they have to offer in what the distillery currently has onsite.

For the Sauternes finished bourbon, we had a unique opportunity to taste a first-fill ex-Sauternes cask. Typically used 4-5 times for finishing, the bourbon had only been in the barrel for about 6 weeks, but was already rich with flavor. Layers of dark fruit, raisin, and seasoned oak could describe the bourbon’s intensity and richness. We were unanimous on this one and decided to have the team at Hillrock let it age a bit longer until it was just right. 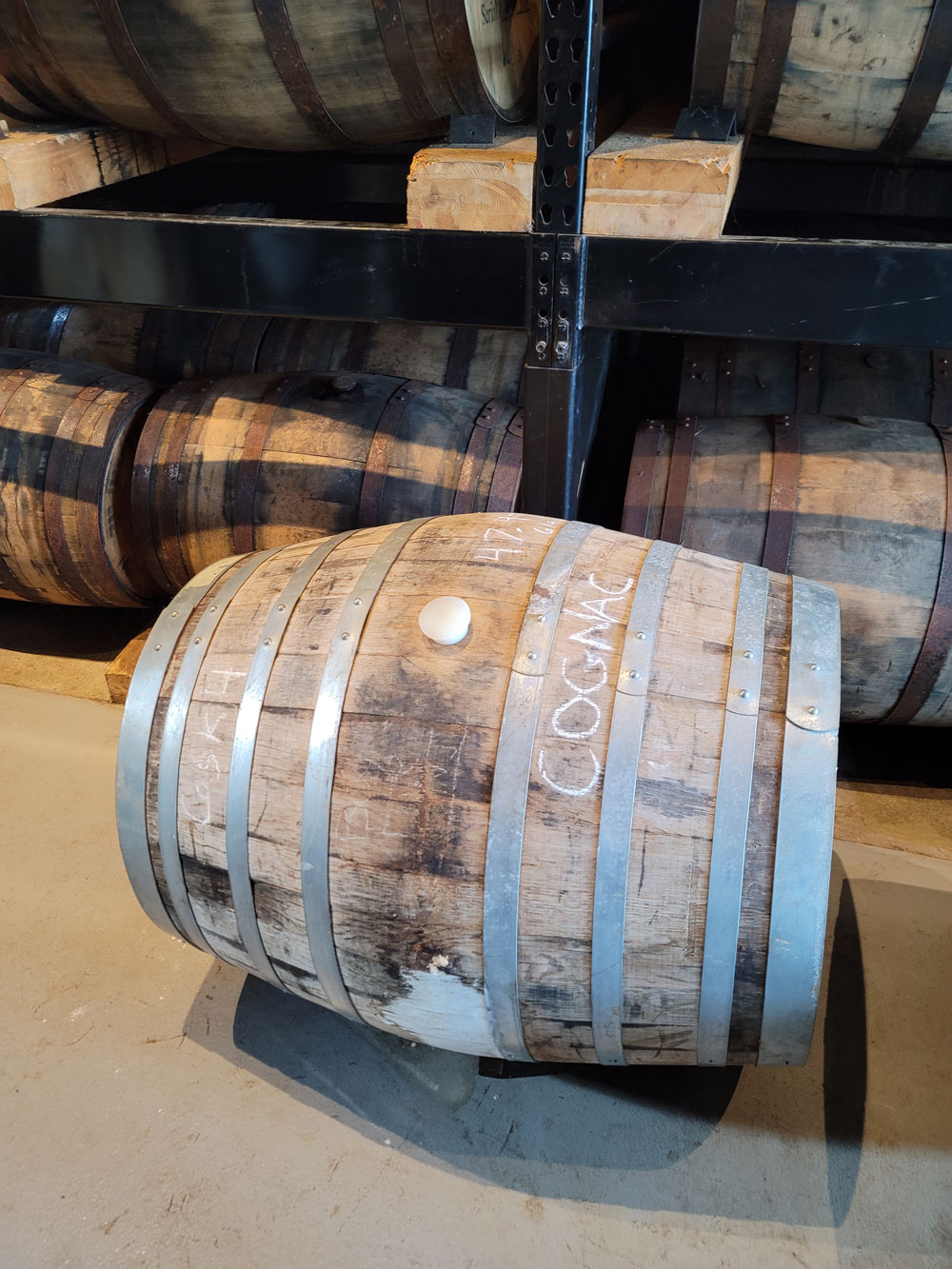 The Cognac finished bourbon surprised us. Kind of the “house barrel,” there was one onsite and it was aging next to the Oloroso sherry casks. The fill level had been decreasing, and it turns out it wasn’t because the barrel was leaky...it was the go-to barrel for anyone that happened to be “thirsty” and wanted a quick thief. We immediately discovered why. Sweet summer fruit, concentrated apricot, peach, creme brulee, and a hint of baking spice layered in made for a smooth and easy drinking finished bourbon, even at barrel proof. Moreover, it complements the Sauternes finished bourbon almost perfectly, making for an optimal pairing.

Finally the wild card. We tasted single malts, considered other finishes, and then got into ryes. There it was. Like everything Hillrock does their process in creating ryes is a unique one that results in an incredibly rich whiskey. For their double barrel rye they use a 100% unmalted rye grain mashbill, which isn’t easy to distill, but ultimately offers a tremendously rich, spicy backbone to the whiskey. Double-barreled in virgin charred oak tames some of the spice, and while we probably would have been happy with any of the rye barrels we tasted, we decided on one with delicious gingerbread and molasses cookie notes against an oaky, spicy rye backbone. Tremendously rich and just the right amount of intensity. 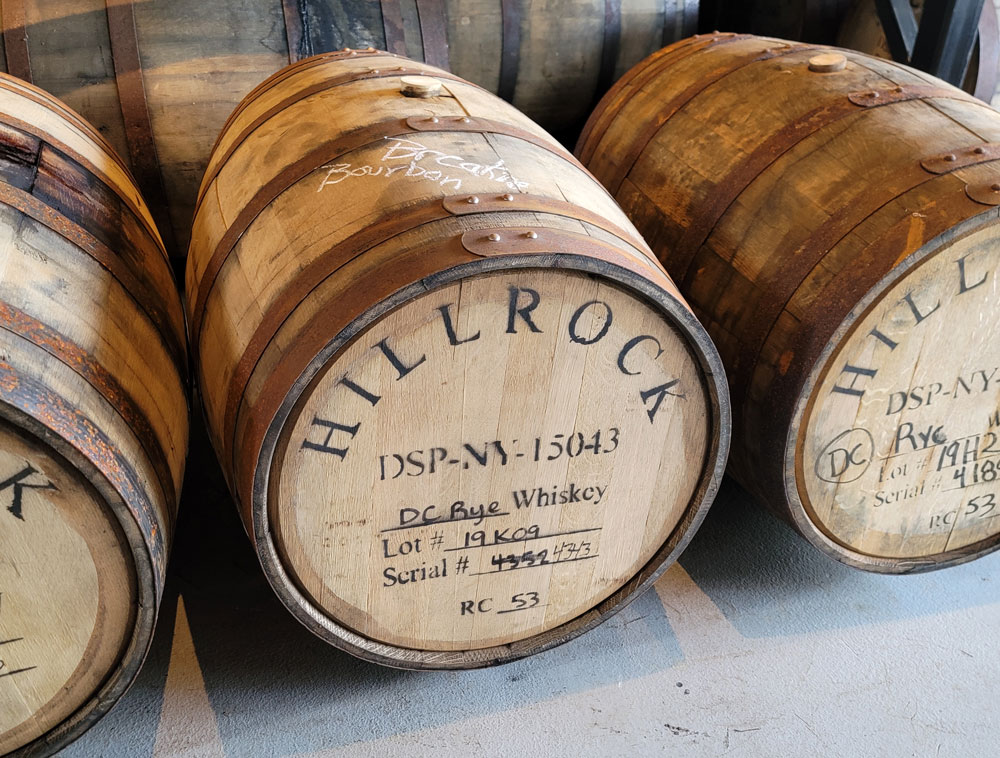 These barrels are some of the most special and unique barrels we have ever tasted. They’re unlike most of the major brands out there, and a reminder of why we get excited about visiting distilleries and making single barrel selections. The contrast across the three selections makes for a diverse and well integrated flight. We suggest starting with the Cognac Finished Bourbon, then the Sauternes Finished Bourbon, and finally the Double Barrel Rye.

When it comes to detail, Hillrock Estate Distillery has plenty of it and behind every detail is a story to tell. One story is pretty pretty front and center, and that’s the family’s dogs, Whiskey and Spirit. Australian Shepherds, they were growing puppies when we visited in June and had just been named. Their predecessors, Storm and Shadow, are actually featured on the bottle label if you look closely enough. So it was fitting that we highlighted each of the young pups on the bourbon picks - “Whiskey, Man’s Best Friend” and “High Hudson, Starring the Aussie Shepherd Spirit.”

As for the rye, we had a few other concepts to tinker with. One that stood out had to do with the house that was moved to the property - a Georgian house that was originally built in 1806 (notice the “1806” featured on the bottle?), by a Revolutionary War Captain, and then moved to the property in 2006. When light hits the front porch just right, it forms a Freemason symbol, the oldest fraternal organization in the world. If the house could tell stories of what has happened inside those walls, imagine the stories it could tell. We went with it, and thus “The Haunting of Hillrock” became the nickname for our Double Barrel Rye. 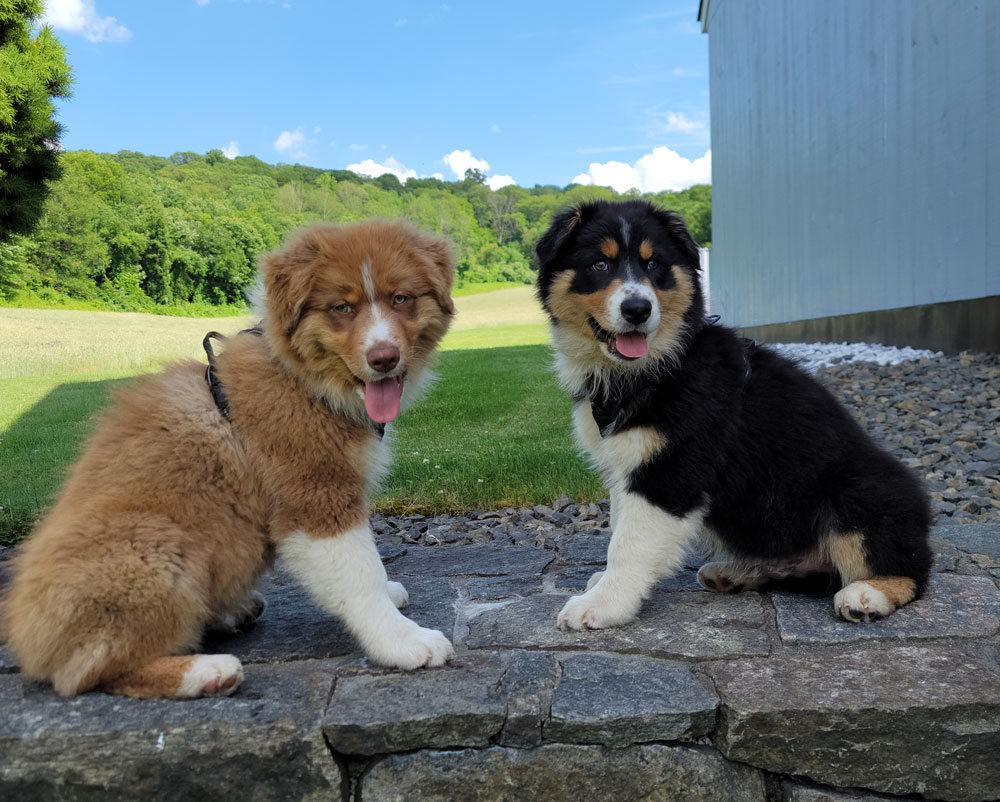 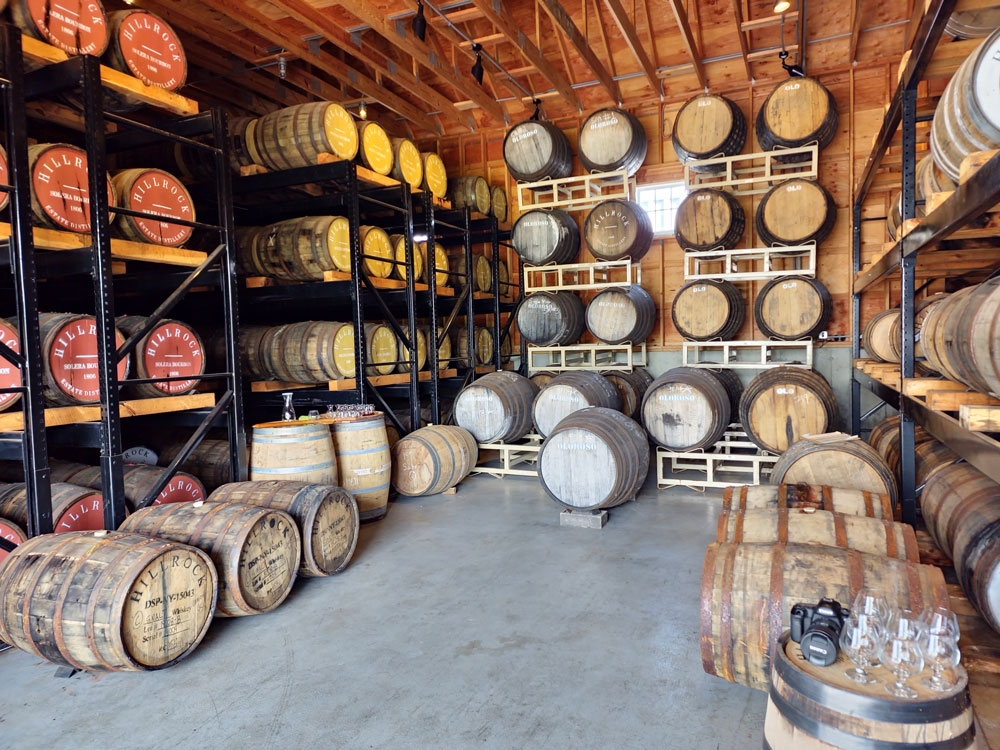 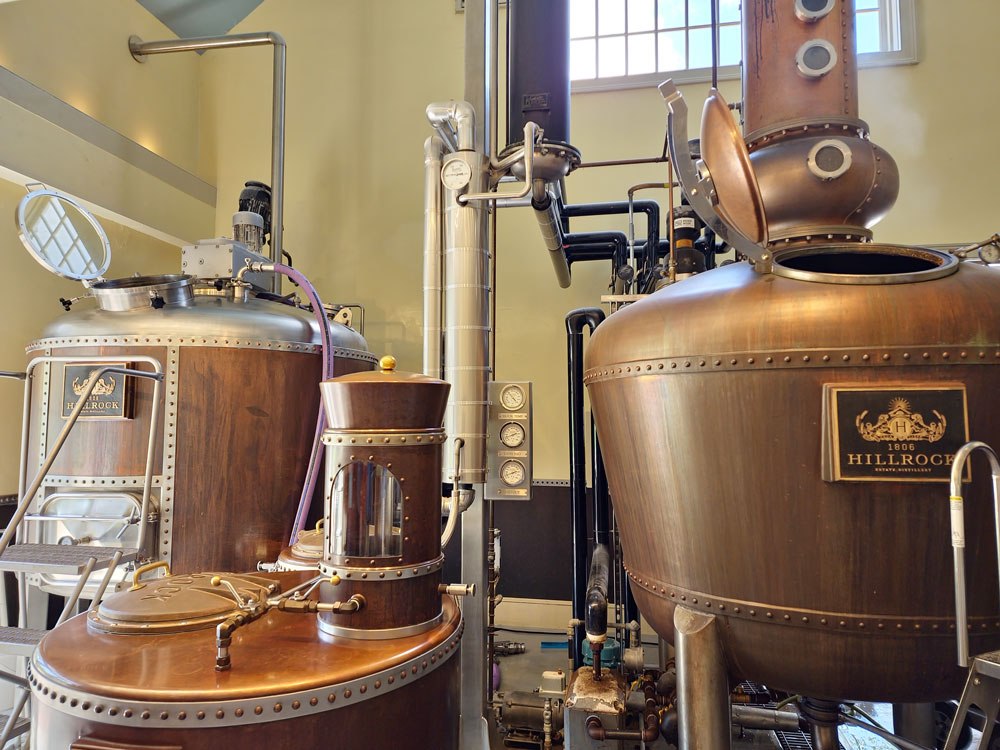 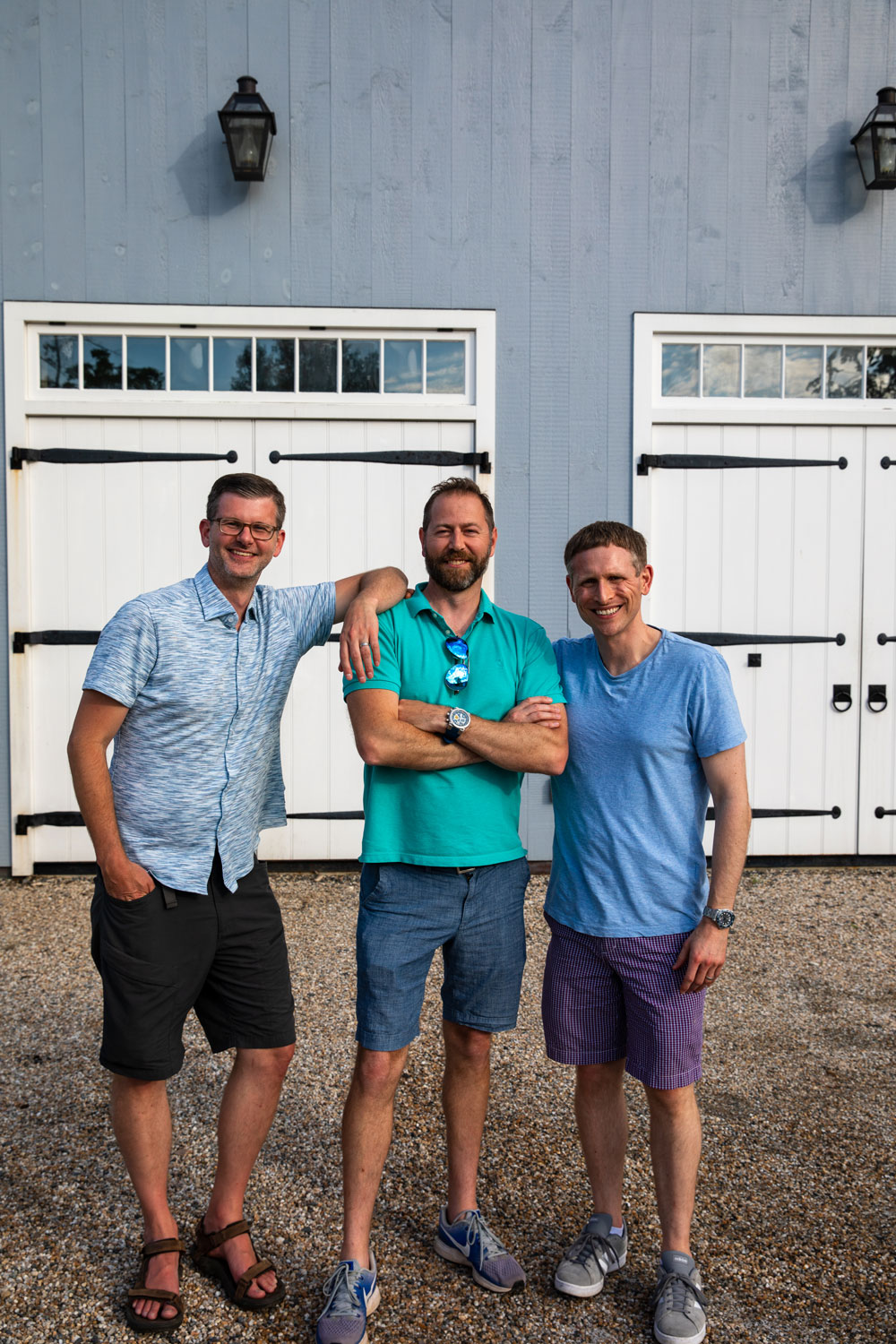