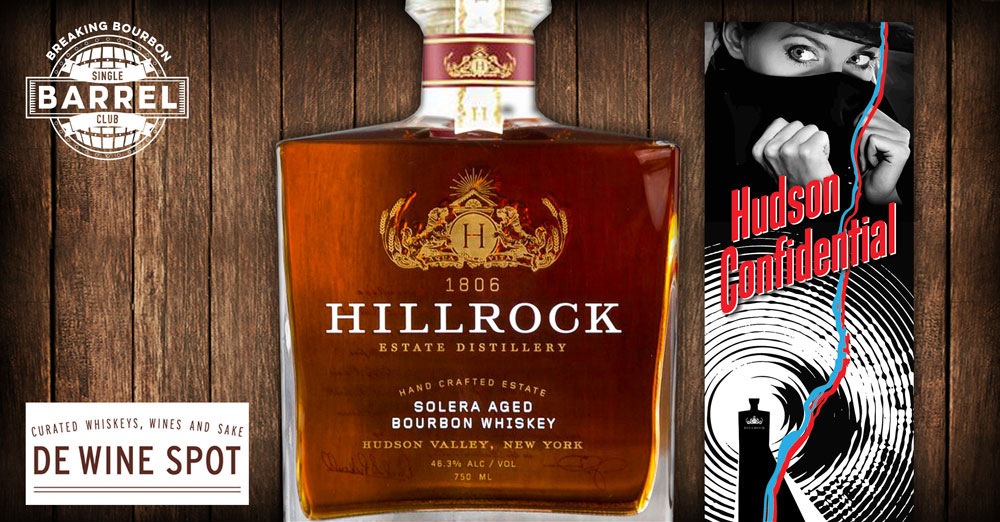 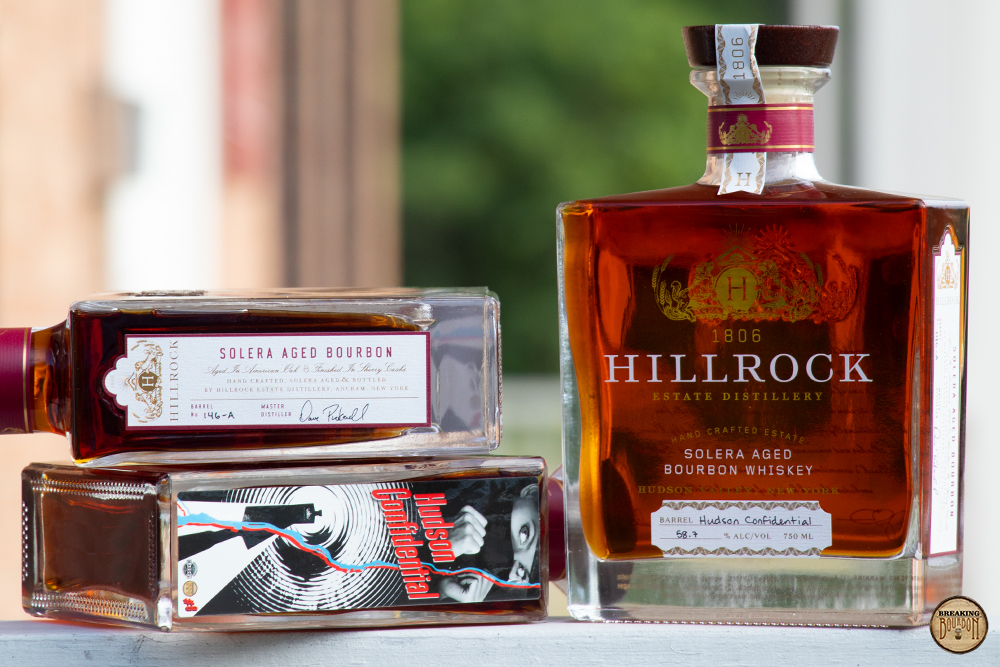 This is another pick with our friends at De Wine Spot which is located in Brooklyn, NY. With part of the Breaking Bourbon team located in Upstate New York, we wanted to select a single barrel with a distillery that was more in our backyard, not overly well known, but had an amazing product that we could expose more bourbon drinkers to. Hillrock Estate Distillery immediately came to our minds and it was an easy decision to reach out to them.

For those who aren’t familiar with Hillrock Estate Distillery, they are located in Ancram, NY, which is about two hours north of New York City. Hillrock made waves in the industry when they hired the late Dave Pickerell as their master distiller. After having moved on from Maker’s Mark, Pickerell looked for new projects and consulting opportunities, and Hillrock was one of the first and most hands-on projects he took on.

As the team at Hillrock explained it to us, Hillrock was a true passion project for Pickerell. When Hillrock owner Jeff Baker was getting his distillery off the ground the pair shared a common goal: Make a truly authentic distillery. To accomplish this, they took the wine industry’s practice of terroir and applied those principles to whiskey. In doing so, they would explore how a region’s physical elements can affect the character of the products that are made from it. 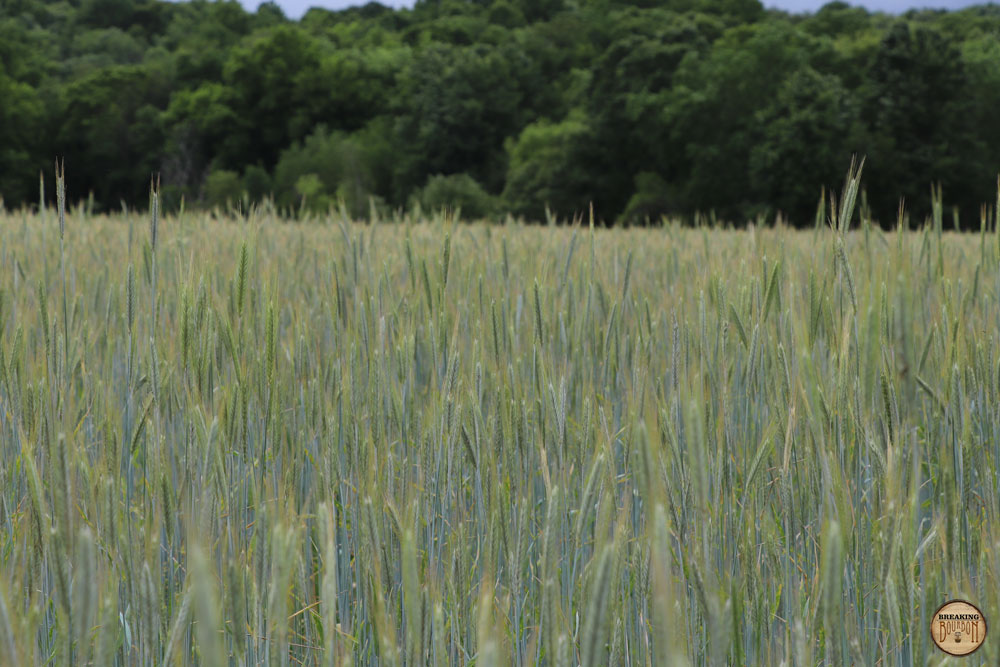 Nestled in the hills of New York’s Hudson River Valley, this farm distillery is a true “field-to-glass” production. All of the grains used in their products' mashbills are grown on their property or immediate area near their distillery. It’s grown without the use of pesticides and raised using sustainable, organic methods. The grain is then harvested, and the whiskey is distilled, aged, and bottled all at their distillery. Even their malt is smoked in a replica Scotland smokehouse which is the first to be built in America since Prohibition.

Another notable aspect of Hillrock’s bourbon is their adoption of the solera process. They describe it as a stack of barrels where a small portion of whiskey is removed periodically from the final set of barrels in the solera, which is then replaced by removing some whiskey from the previous set of barrels, and then repeated through each set of barrels in the solera. No barrel is ever fully emptied, and age and complexity gradually increase over time.  In its final stage, the solera aged bourbon is finished in 20 year old Oloroso Sherry casks to balance the flavors and add layers of complexity.

We had the privilege of selecting this Single Barrel Club pick onsite. The Hillrock team brought out their “fine china” to thief the barrels. 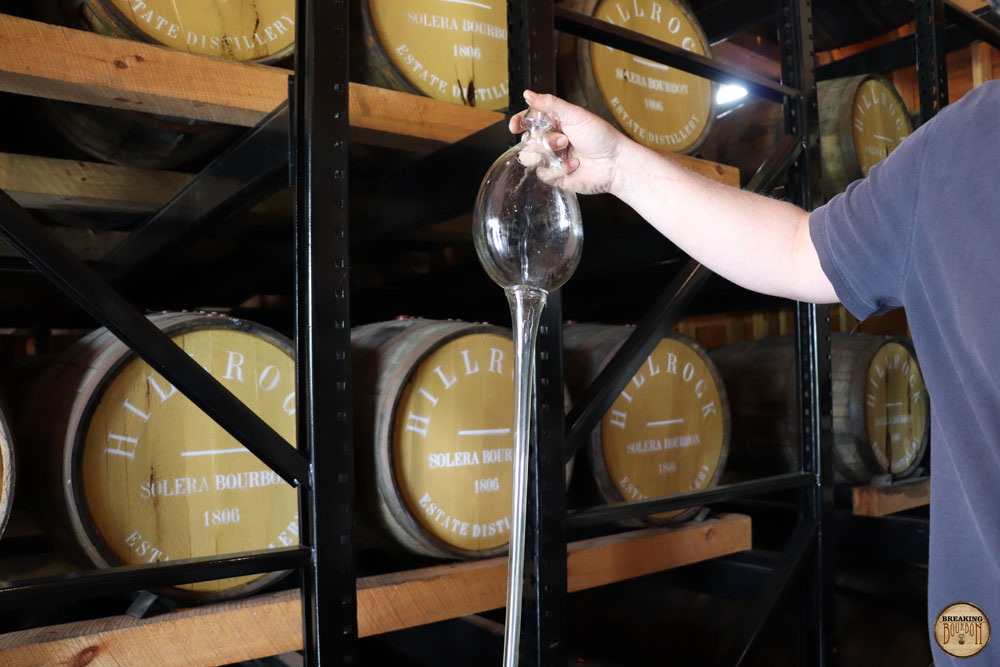 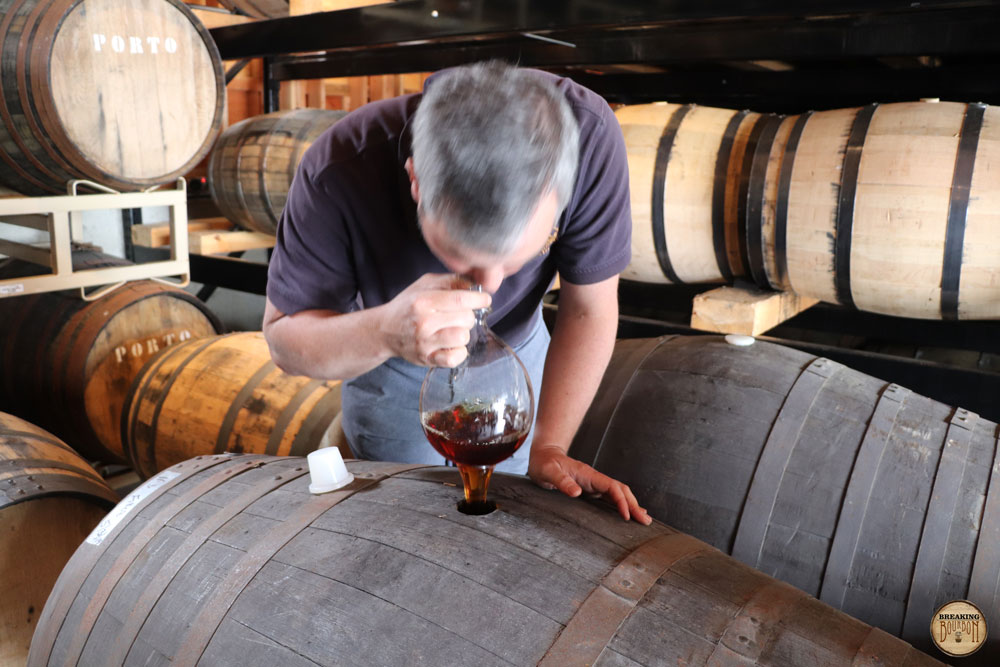 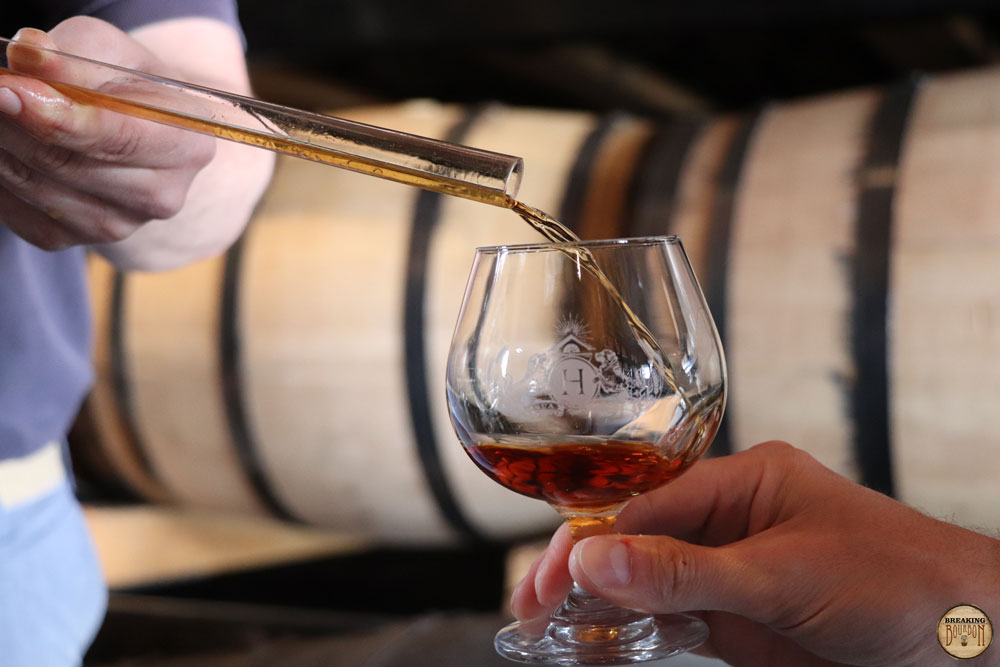 The process started by us getting to know the whiskey for some time before actually getting down to just one. Tasting Hillrock bourbon straight from the barrel at barrel proof was an amazing tasting experience. Their bourbon is normally bottled at 92.6 proof, but out of the barrel it hovers around 115. We were fans of the bourbon already, but at barrel proof, the flavors truly shine. 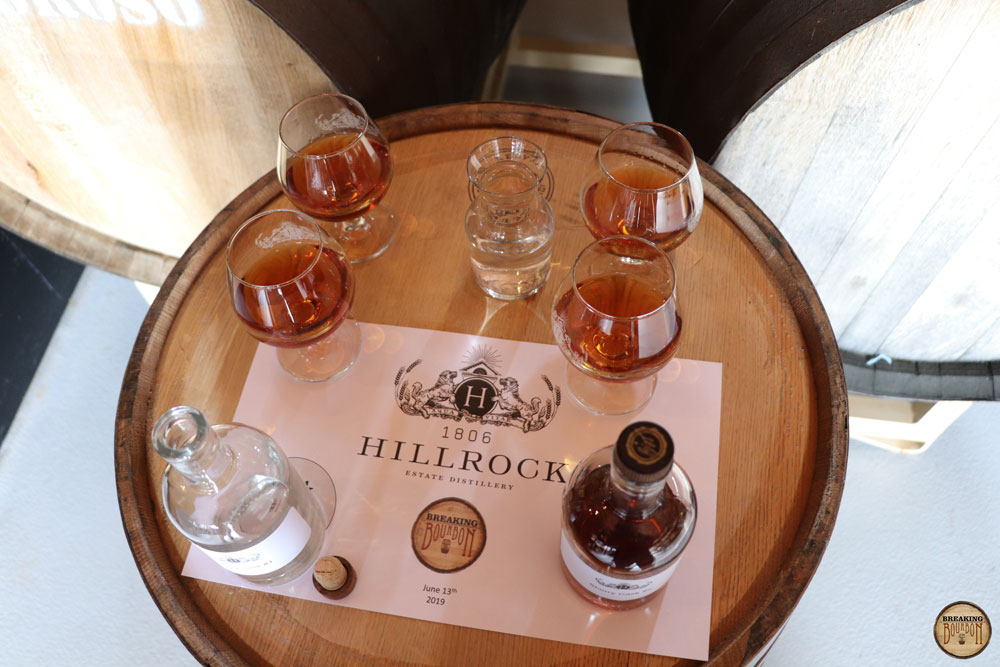 After much deliberation we narrowed it down to two selections, and from there we took our time to discuss the pros and cons of each barrel as it became simply a matter of preference. The Hillrock team said they enjoyed watching our thorough and exhaustive selection process. We finally agreed on one barrel that we found particularly expressive that nicely balanced its sweet flavor palate against its oak and sherry barrel finish.

It’s worth pointing out that even though their bourbon always undergoes the Oloroso sherry cask finishing, it doesn’t come across the same way other barrel finishes do. The finish is better married within the flavor profile and we wouldn’t be surprised if more than a few people didn’t even realize it was finished. Moreover, secondary finishes including a Sauternes barrel finish, which we were particularly fond of, are an option after a barrel has been selected. Despite this, we enjoyed the barrel we selected so much without an additional finish we decided we’d save the secondary finish option for a future barrel pick. 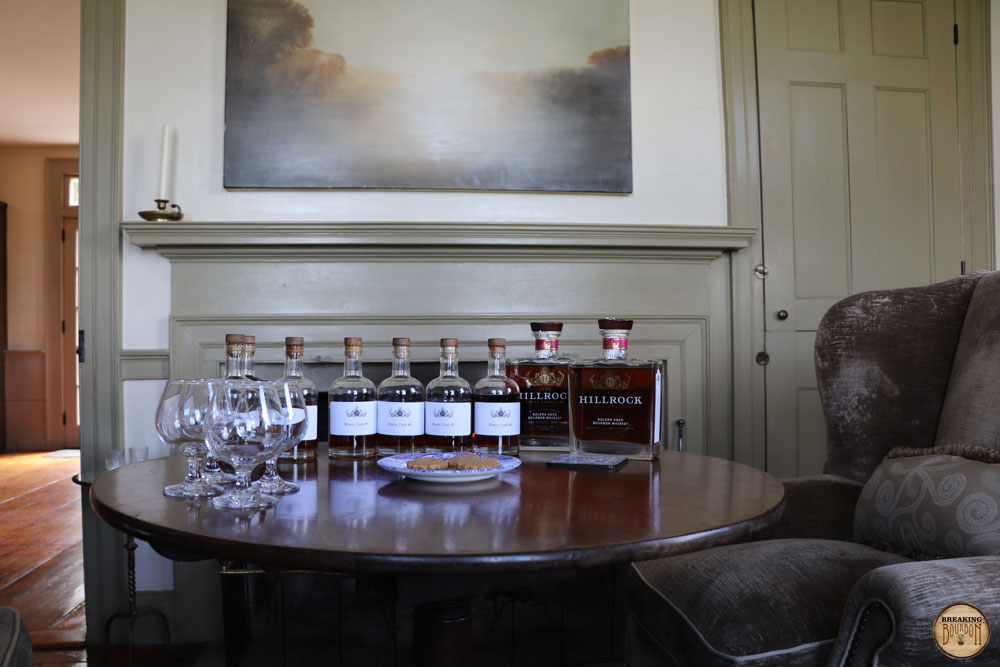 Hillrock has always stood out to us as a distillery that doesn’t cut corners and takes a huge amount of pride in what they do. They deliberately limit their distribution to a few states in order to keep supply manageable where it is available. 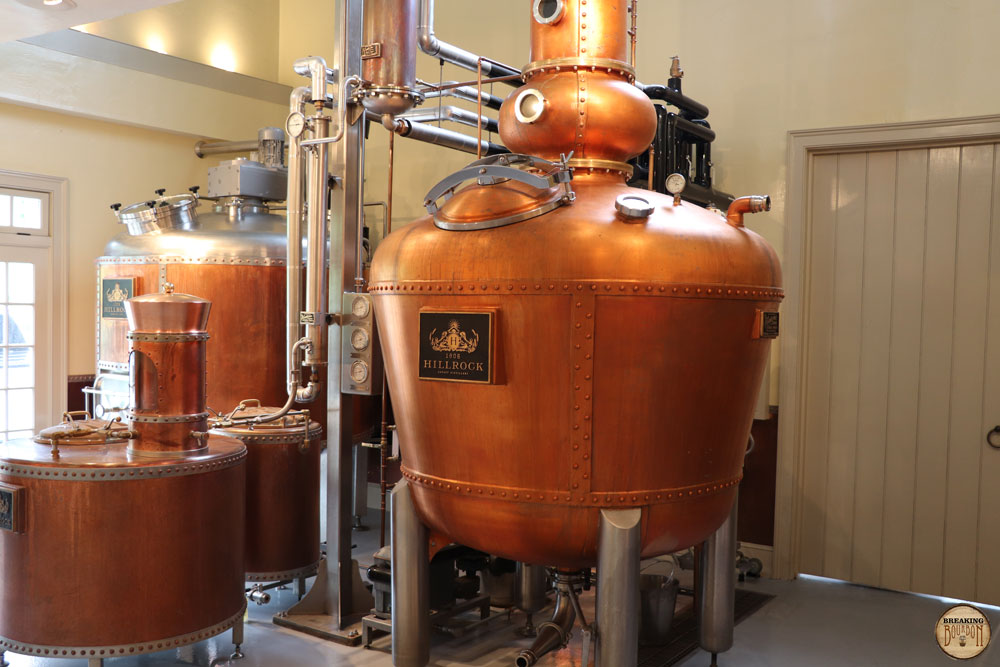 They recently installed a new 500 gallon copper still, which will allow them to increase production. But they say they aren’t in a rush. Pickerell taught them that you never want to sell your every last drop. Both as a learning experience and to continually supply their solera process. Because of this they only sell about half of their production, and a reason single barrel selections from them are so rare. Being able to purchase Hillrock’s bourbon at barrel proof is also a rare opportunity.
‍

‍
For this release’s custom sticker, we wanted it to focus on what we set out to do: shine light on a distillery that many outside their small distribution area might not be familiar with. We understand those in the know about Hillrock might want want to keep it confidential and not let the secret out. But a secret never stays a secret forever, and we would be remiss if we didn’t share our experience with this remarkable craft distillery with our audience.

If you didn’t realize by now we’re excited for this Single Barrel Club selection, and we hope you will be too.

‍
‍
The nose is nicely expressive with bursts of floral aromas, dark fruit, and candied cherries notes that’s punctuated with seasoned oak. The palate is sweet to the tongue, with raspberries, apricots, and raisins. It finishes with a bump of rye spice, followed by oak and plum. Overall an excellent sipper that features a ton of flavor delivered with elegant complexity. 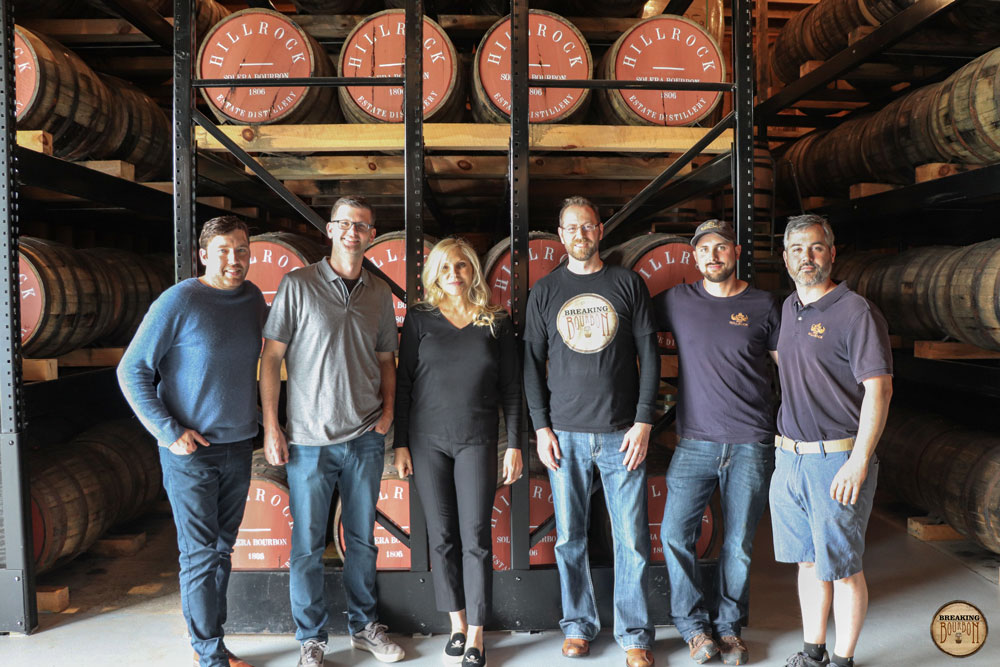