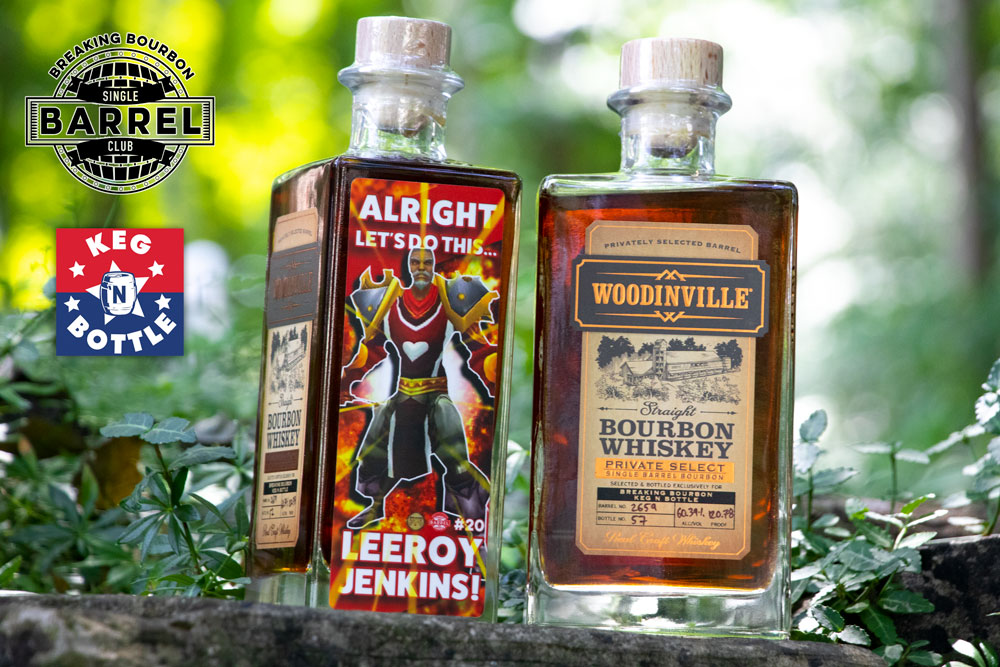 For this pick, we partnered with Keg N Bottle out of California. A California retailer, Keg N Bottle was established in 1981 and has been in business for over 30 years. Keg N Bottle is known for strategically engineered “Liquor Walls” and “Beer Caves.” They carry every different type of liquor imaginable, a wine for every occasion, 1,500 different beers to make you “hoppy,” and over 1,250 different kegs to choose from. Additionally, Keg N Bottle offers national delivery of every single item from their massive selection.

This pick is memorable due to the fact that it was the very first pick we did after the Coronavirus lock down started. We weren’t sure what to expect and neither was Woodinville, since Breaking Bourbon was the very first virtual pick that they ever allowed! It turns out that going first sometimes does have its advantages.

Woodinville is an interesting brand. Started in 2010 by Orlin Sorensen & Brett Carlile, Woodinville is located in Washington State. The company sources all of their staple grains exclusively from the Omlin Family farm in Quincy, Washington. The grains are mashed, distilled, and barreled at the Woodinville Distillery, and then trucked back over the Cascade Mountains to the company’s private barrelhouses. Currently all of their bourbon is aged for 5 years. Woodinville sources their barrels from the Independent Stave Company in Lebanon, MO. According to the company, they were “one of the first craft distilleries they worked with so we got to be a part of the Craft Distillery Series creation. They sent us 24 barrels with different stave thickness, seasoning of the wood, toasting and charring combinations.” Out of this process Woodinville settled on their barrels containing 18 month seasoned oak, and the barrels are finished with a heavy toast and heavy char.

A normal pick for Woodinville means either traveling to Washington State, or meeting with one of their barrel representatives for an in-person remote experience. COVID-19 meant neither was possible at the time, so instead we were Woodenville’s first ever virtual pick held over Zoom! We were sent 5 different barrels to taste through. Unlike their standard bourbon, which is bottled at 90 proof, the barrels we received were all barrel strength. In the end we found barrel number 2659, which was 120.7 proof and really exemplified what we like about Woodinville Bourbon.

This club pick will be memorable not only because of the the bourbon itself, but also because of time we picked it at the offset of the pandemic. Stay strong in 2020 just like Leeroy Jenkins!