Starlight Distillery is located on the grounds of the Huber estate. Housing Huber’s Orchard & Winery, according to the company they “began farming back in 1843 when our ancestors settled in Starlight, IN from Baden-Baden, Germany. Growing primarily fruit, our farm began to diversify in 1978 when we opened the doors of our winery. This straight bourbon whiskey is aged for a minimum of 4 years in Huber’s Old Rickhouse (on the grounds of the 7th generation Huber estate, established in 1843).” Now on its 7th generation, Huber estate produces a variety of crops that are grown alongside the onsite distillery that produces an assortment of brandies and whiskeys. They began distilling bourbon in 2013.

‍‍To be labeled Bottled in Bond, the whiskey must be the product of one distillation season and one distiller at a single distillery, aged in a federally bonded warehouse under U.S. government supervision for at least four years, and it must be bottled at exactly 100 proof. Additionally, the Bottled in Bond label must clearly identify the distillery where it was distilled and where it was bottled, if different.

‍‍The company states that its Bottled in Bond version is typically a 4-barrel blend of both three and four grain bourbon.

‍‍The bottle being reviewed comes from Batch No. B2205.

Sweet traditional scents kick things off with lightly toasted caramel and vanilla first appearing. Settling in behind is a nice balance of toasted marshmallows along with slight hints of oak and mixed nuts. A dose of ethanol is present, which encompasses the scents making itself known. Overall, it’s a fine opening for the sip, however, it leaves you wanting just a tad more from the aromas that are present.

The palate follows the foundation that the nose sets. Traditional flavors of vanilla, caramel, and a sharp oak note are present. A slight soft baked bread flavor appears tempering the sip. Further exploring reveals a peppercorn blend that adds an array of light spices along with a slight earthy hint of tobacco leaves. It’s a pleasant flavor combination that showcases a nice array of flavors, however, a noticeably thinner mouthfeel ends up doing a disservice to what is ultimately delivers.

A rush of spice charges forward. Immediately behind are notes of leather, tobacco, and sharp oak. Spice continues to build in the form of rye and black peppercorn, which nicely highlights the bourbon’s proof. This spice mix turns into a lingering dry heat that gradually fades away. It’s a nice ending that allows the bourbon to go out on a high note.

Bottled in bond bourbons are always a nice way to compare a distillery’s distilling prowess against another. Most bottled in bond products hover around the 4-6 year old mark, with the occasional few hitting double digits, such as the ongoing Old Fitzgerald Bottled in Bond release. Additionally, most products use a single mashbill.

What is unique about Starlight’s standard bourbon line is that it’s a blend of barrels utilizing three grain and four grain mashbills. This holds true for its Bottled in Bond Bourbon which uses the same combination of mashbills that is also present in its Small Batch counterpart. It doesn’t necessarily make for a meaningful improvement over the small batch version, however, its extra proof allows it to highlight the flavors in a more defined way. Nevertheless, it’s nice to be able to experience a bottled in bond product that sticks to the laws required of it, yet brings a variation with its blend of mashbills that you don’t typically find in the marketplace.

Starlight whiskeys have always been on the affordable side. Their limited editions tend to be $80 or less, while their small batch products are a very reasonable $35 and their standard Single Barrel Bourbon for a consumer-friendly $50. Falling in the middle of the spectrum is the company’s Bottled in Bond Bourbon with its retail price of $60. While that can seem high compared to other bottled in bond products, it’s actually right in line with others in the marketplace from smaller distilleries such as Boulder Spirits Bottled in Bond Bourbon or Ben Holladay Bottled in Bond Missouri Straight Bourbon.

However, compared to its small batch counterpart, Starlight Bottled in Bond doesn’t do enough to justify its near-double price point. This isn’t necessarily a knock against Bottled in Bond Bourbon, more so it’s a testament to the reasonable price tag that the Small Batch and Single Barrel carry. While the flavors are slightly more defined, they’re not enough to put the necessary distance between the two to differentiate the price increase. Additionally, their standard Single Barrel is $10 less and comes in at a higher proof. Higher proof doesn’t necessarily make for a better bourbon, however, we’ve found the company's single barrels to be well-produced bourbon at a great price point making Starlight Bottled in Bond’s $60 price point harder to justify.

Utilizing the company’s unique combination of mashbills, Starlight Carl T. Huber’s Bottled in Bond Bourbon delivers a straightforward sip that shows clear potential for what’s to come from the brand.

Similar to its Small Batch counterpart, Starlight Carl T. Huber’s Bottled in Bond Bourbon drinks more like a classic Kentucky bourbon versus one you may be used to coming out of Indiana. Utilizing a unique blend of mashbills, it’s clear that the company isn’t trying to emulate anyone else, instead choosing to forge its own path forward in this space. The bourbon is priced is in line with other bottled in bond products from distilleries similar in size, yet it’s hard to justify when the company’s own Small Batch and Single Barrel products sell for less and deliver equal or better sips. This is a bourbon that won’t blow you away, however, it’s a nice change of pace from other bottled in bond bourbons in the marketplace, and shows clear potential for what’s to come from the brand.

Buy Starlight Carl T. Huber’s Bottled in Bond Bourbon at Frootbat
‍The sample used for this review was provided to us at no cost courtesy its respective company. We thank them for allowing us to review it with no strings attached.
360 video 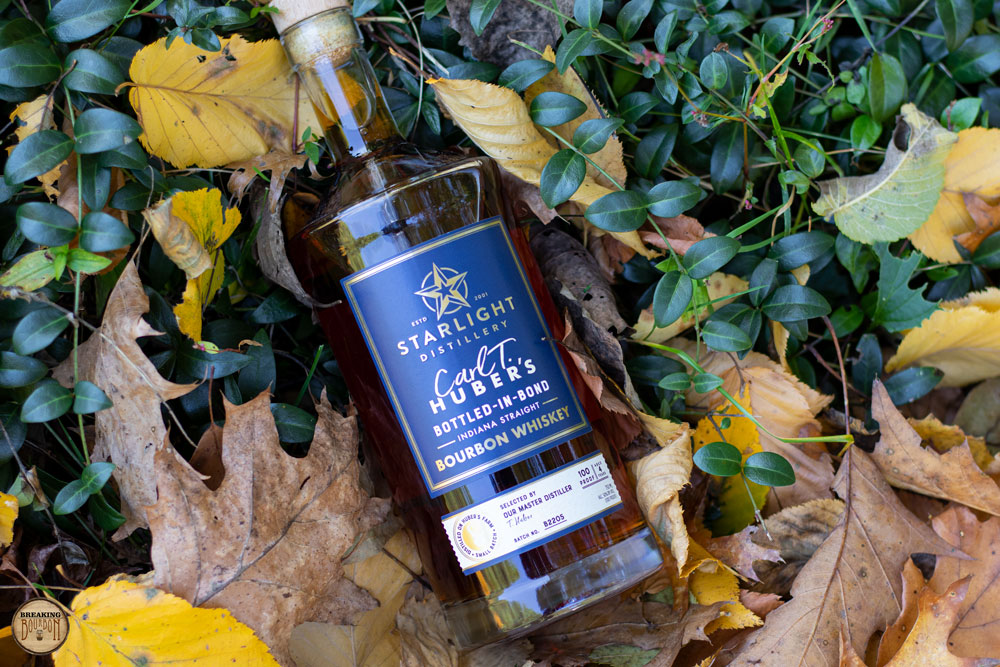 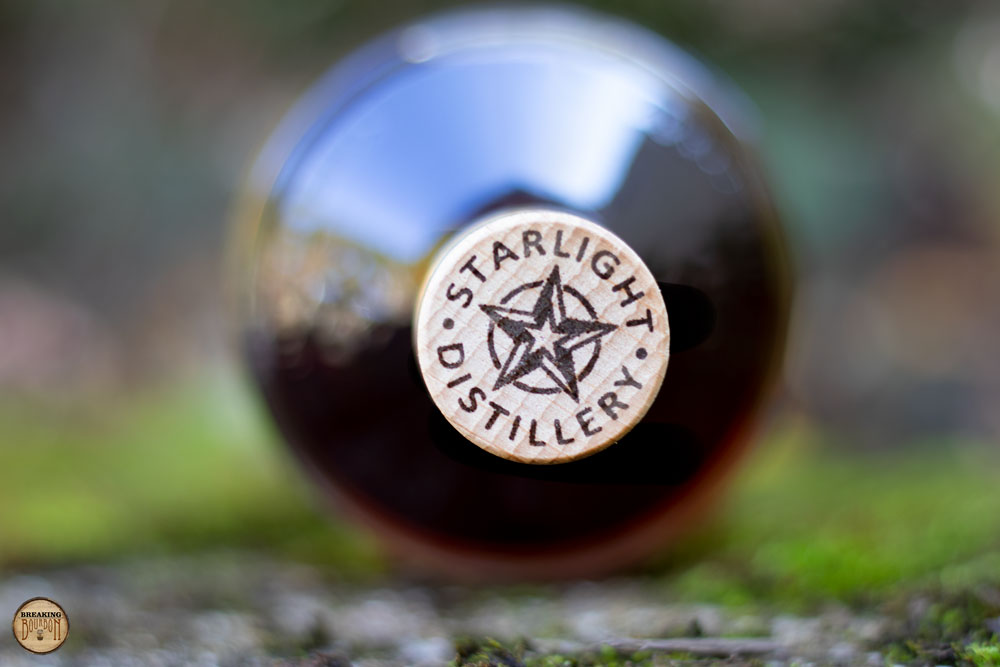 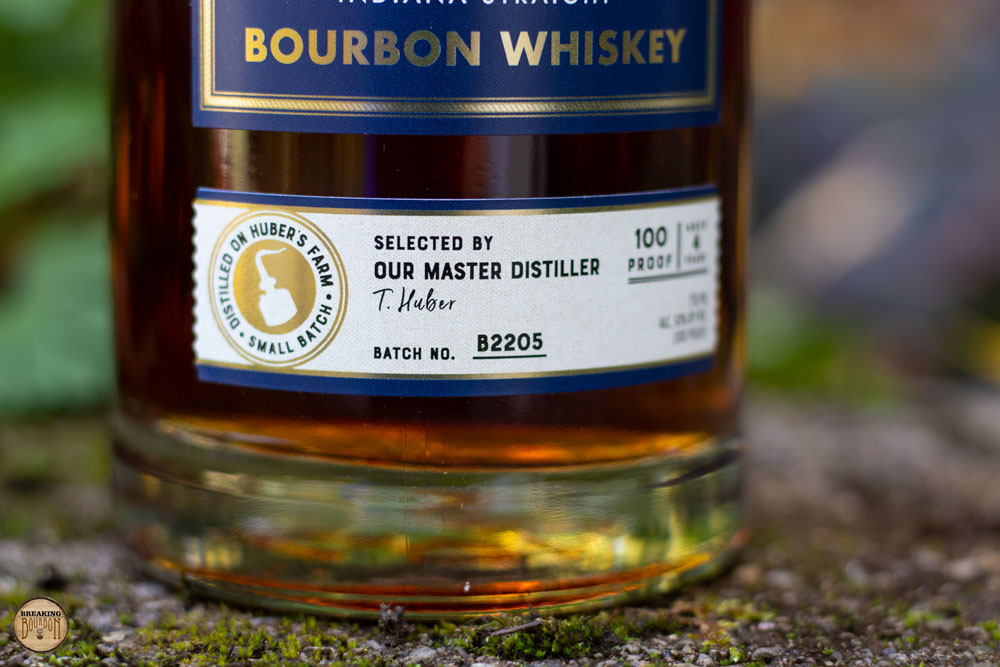 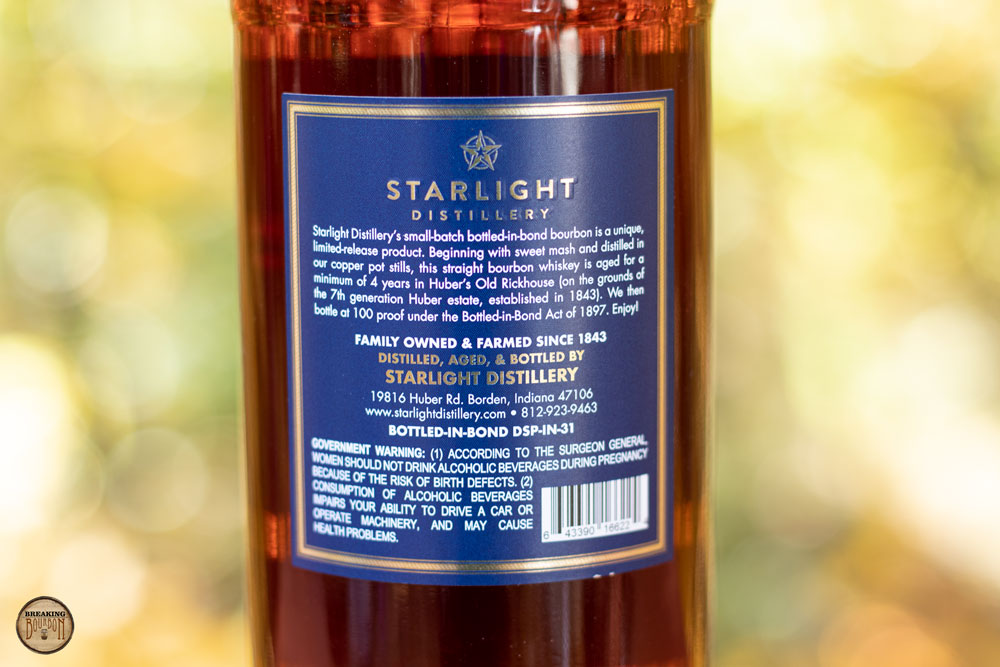