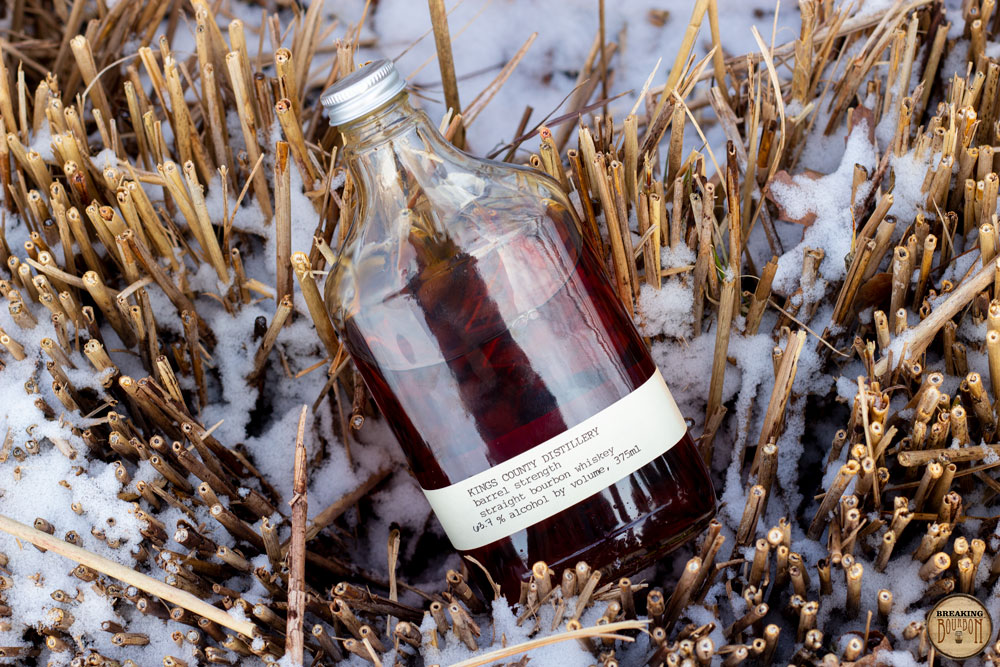 Kings County Distillery is New York City’s oldest and largest whiskey distillery. They are located in a 120-year-old Paymaster Building in the Brooklyn Navy Yard. Co-owner and distiller Colin Spoelman cut his teeth distilling moonshine in his Brooklyn apartment before deciding to make it his fulltime job. Kings County Distillery notably uses Scottish copper pot stills and open fermentation to produce their whiskey. Their corn is from a local New York State farm, their barley for their bourbon is from England, and Scotland for their Peated Bourbon and Single Malt whiskey. Their whiskey is aged in 15-gallon barrels.

Dark burnt caramel and candy corn open the whiskey to pleasant effect. The aroma is dark and heavy, leaning on rich brown sugar, maple, and thick oak. It’s expressive yet at the same time doesn’t give away its high proof. Potent without being chaotic, it’s genuine and all around an engaging aroma.

A very expressive tapestry of flavors that once again bow to the darker side of the flavor spectrum. Oak is at the forefront bringing with it more notes of maple and rich vanilla. Malt is delicately thread throughout the palate, providing a spark of contrast. Hot and forceful at times, this is a barrel proof whiskey that is persuasive in its assertiveness.

Dominated by syrupy oak and molasses, the finish creates a lasting impression. It sticks with you, not just in length of time, but with the mark it makes on your tastebuds. A thick viscosity is mouthcoating and works well with its flavor profile. It offers equal parts familiar and new, with qualities similar to other barrel proof bourbons along with a maltiness and texture that brings a certain amount of novelty to the tried and true.

There are basically two ways new distilleries can go about creating their bourbon. They can try their best to mimic Kentucky’s biggest and brightest to create something that is familiar and relatable, or they can take the road less travelled and create something refreshingly new and uniquely their own. Neither path is easy or a guarantee, as any young distillery will probably tell you.

Kings County Distillery took the latter path. Their whiskey doesn’t fit into an easy-to-define box - often borrowing traits, techniques, and ideas from their peers to inspire something uniquely “Kings County.” There are few distilleries using Scottish pot stills in the U.S. be it because of cost, availability, knowhow, or fear of the unknown. But the first thing you’ll notice about Kings County’s whiskey and particularly their Barrel Strength Bourbon, is its texture. Not only in its viscosity, but also in the fabric of its flavor profile. There’s a roughness to its complexity that doesn’t taste overly manufactured.

It isn’t just the pot still that creates Kings County’s unique taste. They employ an open fermentation technique that many Kentucky distilleries use, but the technique is far less common with craft distilleries. Their grains are sourced both locally and from England, and they age their whiskey in small barrels with a lower-than-average barrel entry proof of 110-116.

Also quite interestingly, their bourbon only uses two grains in its mashbill: corn and malted barley. This decision to omit rye or wheat as the secondary flavor grain creates a bourbon that tastes different the moment you sip it. With 20% of its mashbill committed to malted barley, it’s amazing how noticeably it comes across against the 80% corn. All of these decisions and techniques have been used before, but it’s the joining of them, and the particular style distiller Colin Spoelman uses, that results in Kings County’s unique tasting bourbon.

If you’re familiar with the craft whiskey scene during its explosion the past decade, then you most likely have heard how expensive it is to launch a distillery. Thankfully craft whiskey prices have started to trend lower as their whiskey has come of age. Kings County has been around since 2012, but that doesn’t mean they immediately put away a rickhouse worth of barrels the day the distillery opened. They are still patiently waiting for the bulk of their whiskey to come of age and the process they use to create their whiskeys isn’t cheap. As a result, their whiskey is expensive. In fact, their 3 year old barrel proof whiskey is priced the same as their 4 year old Bottled in Bond whiskey - $99 for a standard 750ml bottle. That can be hard to swallow if you compare their barrel proof whiskey to say, Heaven Hill’s Elijah Craig Barrel Proof or Beam’s Booker’s Bourbon, both of which cost less and have proven themselves time and time again.

But there is a certain value associated with uniqueness and something that is seen as an artisanal product. No matter what the whiskey brand, whiskey-making always requires a good deal of hands-on work. While I enjoy the immediate sipping quality of their 4 year old Bottled in Bond bourbon, their younger Barrel Strength bourbon’s high proof really brings out its best qualities, is priced accordingly, and is comparable to its competition.

Despite a low age statement, this barrel strength bourbon shines thanks to unique crafting techniques and intriguing texture.

If you go into Kings County Barrel Strength Bourbon expecting a Kentucky barrel proof bourbon, you’ll probably be a bit bewildered. This is a bourbon set out on its own path, exploring areas Kentucky bourbons don’t venture to. This might make it polarizing to some, especially those used to their bourbon having a three grain mashbill. But it’s whiskeys like Kings County that takes the spirit in new and much needed interesting directions. Even at a young age, it is a great tasting whiskey, and having tasted older versions, there is more great stuff still to come from this distillery. Get on board, because this whiskey is worth the ride.

Buy Kings County Barrel Strength Bourbon at Frootbat
‍The sample used for this review was provided to us at no cost courtesy its respective company. We thank them for allowing us to review it with no strings attached.
360 video 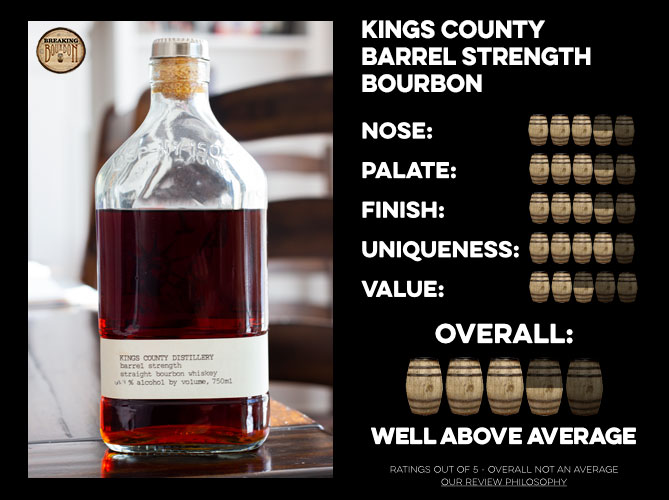 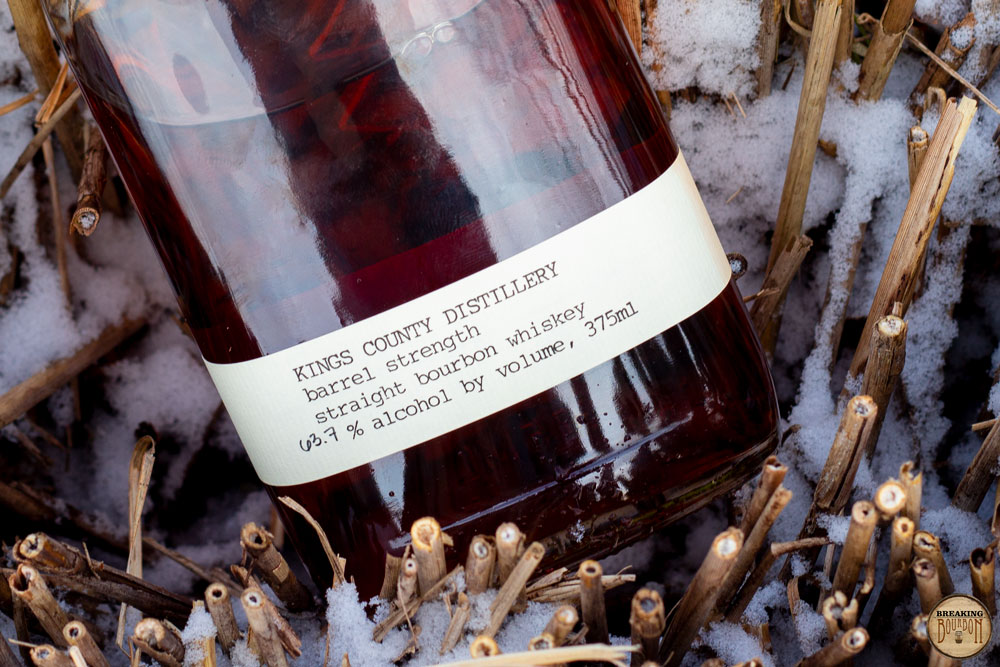 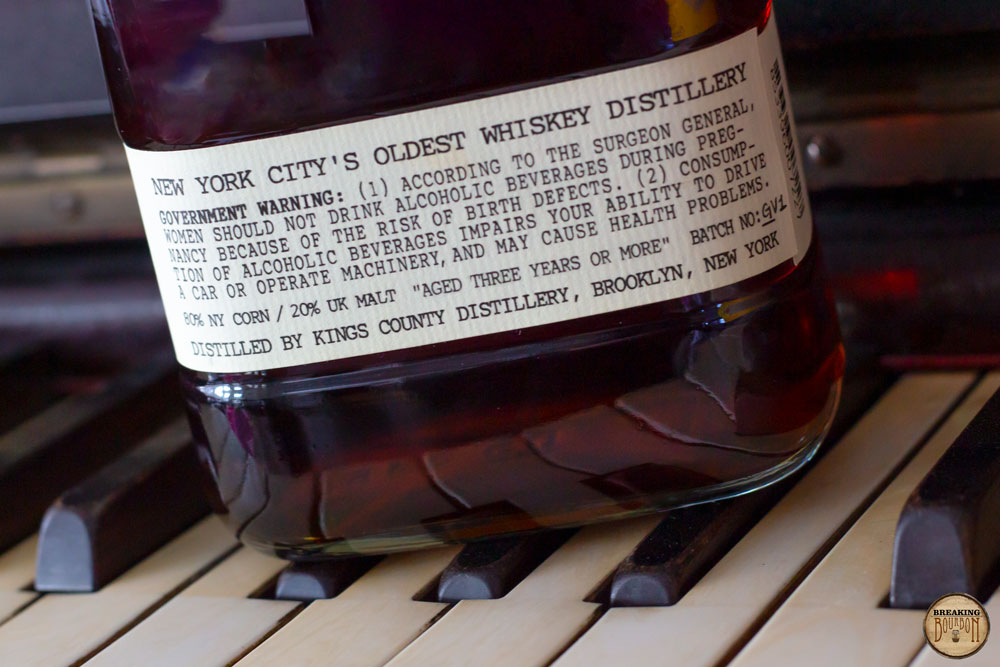 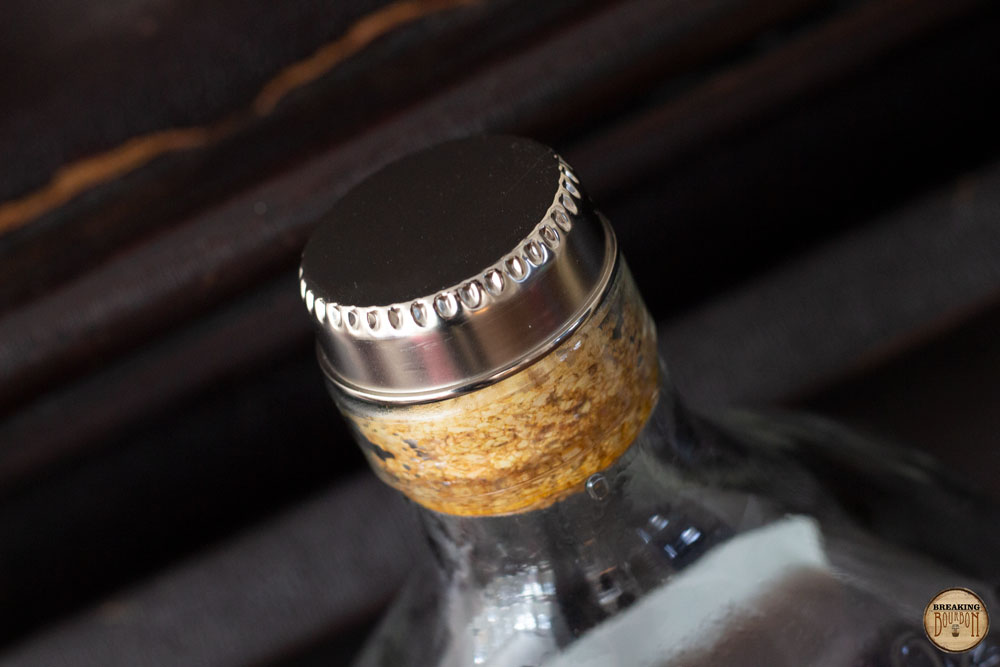 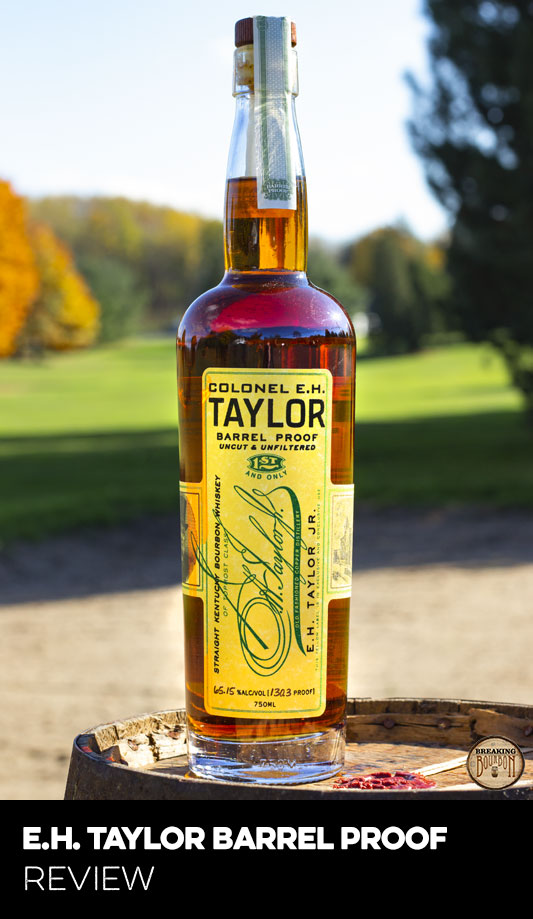