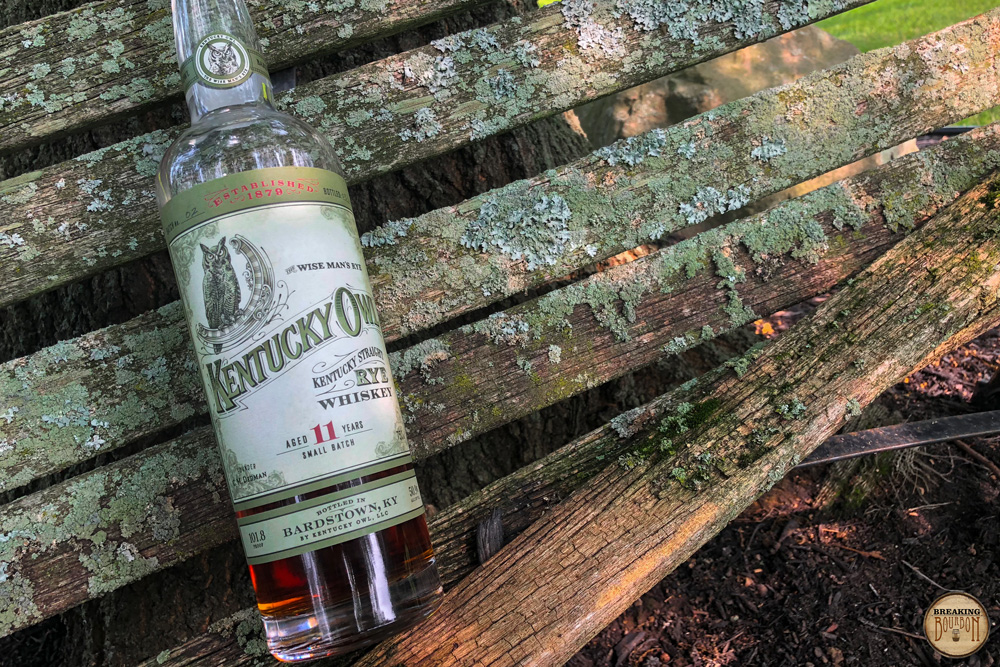 Kentucky Owl Bourbon was founded in 1879 by C.M. Dedman and is currently led by Dixon Dedman. He recommissioned the brand and released his first batch of bourbon in 2014 and first batch of rye in 2017. The Kentucky Owl brand was purchased by the Stoli Group who plans to open up a new distillery under this brand name.

A medium intensity scent billows out of the glass and lures you in with its welcoming aromas. A dessert bakery bouquet of vanilla, custard, caramel, buttercream frosting, and nutmeg. Pleasing and hard to resist.

The dessert bakery theme continues into the palate as toffee, caramel, and vanilla flavors come into focus. Milder notes of cherry, cinnamon, and rye spice are present, but don’t overpower adding a nice layer of depth. It’s a crowd pleaser of flavors that are made smoother thanks to its proof.

The sweeter notes drop off leaving a medium dry, slightly spicy aftertaste. Cinnamon notes and its overall hotness ramp up against a backdrop of leather, burnt caramel, and oak. It’s a nice counter to the sweeter and softer side of the whiskey and reminds the drinker that at its core, this is a rye whiskey.

There are a lot of ryes on the market thanks to its resurgence in popularity in recent years. Many, unfortunately, don’t stand out from the masses as most tend to blend together. Some of this has to do with many of them originating from the same distillery (MGP Ingredients), while some is due to simply rushing products to the market. Despite constantly being told rye can be better young, in reality, it’s often the old ryes that are the most memorable and sport the most character.

Both Kentucky Owl Rye Batch 1 and Batch 2 are excellent examples of this. They have more depth and complexity than you get from a typical rye. Batch 1 is 9 proof points higher than Batch 2, and tastes like it. I prefer it to Batch 2, but it certainly isn’t as drinkable. It will largely depend on who you’re drinking with and the mood you’re in, but each Batch is memorable in its own way. They still very much straddle what traditional rye tastes like, but are better constructed and more developed than the average rye.

Kentucky Owl states in their press release that they “...crafted this straight rye whiskey to be more approachable to the casual drinker, while containing all the good parts of whiskey without any of the bad.” While that statement is somewhat laughable since what company actively tries to leave the bad in (also what does that even mean?), but the first part rings 100% true. Lowering the proof and focusing on crowd pleasing flavors makes this very drinkable for just about anyone. The rub is, if they were focusing on more casual drinkers, why the $70 price increase from Batch 1? That is the hardest part to swallow about Batch 2. While Batch 2 might not be light years ahead of products half their price, there is an incremental quality bump that they feel equals an exponential bump in price. The company did the same thing with Batch 8 of their bourbon, which saw a bump from $200 to $350. Yes Kentucky Owl Rye Batch 2 is a good whiskey, but the price jump in 9 months simply doesn’t compute.

An easy-to-drink rye with a hard-to-swallow price point.

Like all of Kentucky Owl’s past and current products, Rye Batch 2 is sourced from one or more distilleries in Kentucky. Despite this, its age, and presumably expert selection and blending of barrels, are what has made Kentucky Owl’s rye batches stand out. I might not have been blown away by Batch 1 when I first had it last year, but it is one that I haven't gotten out of my head and something I return to whenever I can. That says a lot about Kentucky Owl’s rye batches. They’re really good and very drinkable. That was what Kentucky Owl set out for with Batch 2, and they certainly succeeded. Add to that the fact that 11 year old ryes aren’t easy to come by, and just maybe you can overlook its high price point. With a lack of readily available competitors, Kentucky Owl Batch 2 might win just by showing up.

Buy Kentucky Owl Rye Batch 02 at Frootbat
‍The sample used for this review was provided to us at no cost courtesy its respective company. We thank them for allowing us to review it with no strings attached.
360 video 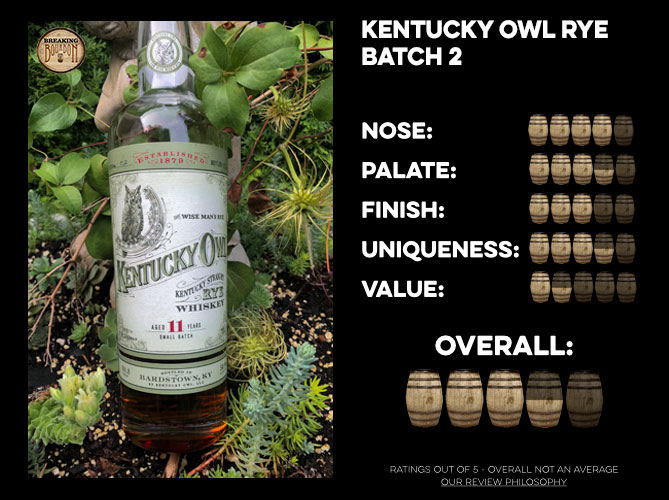