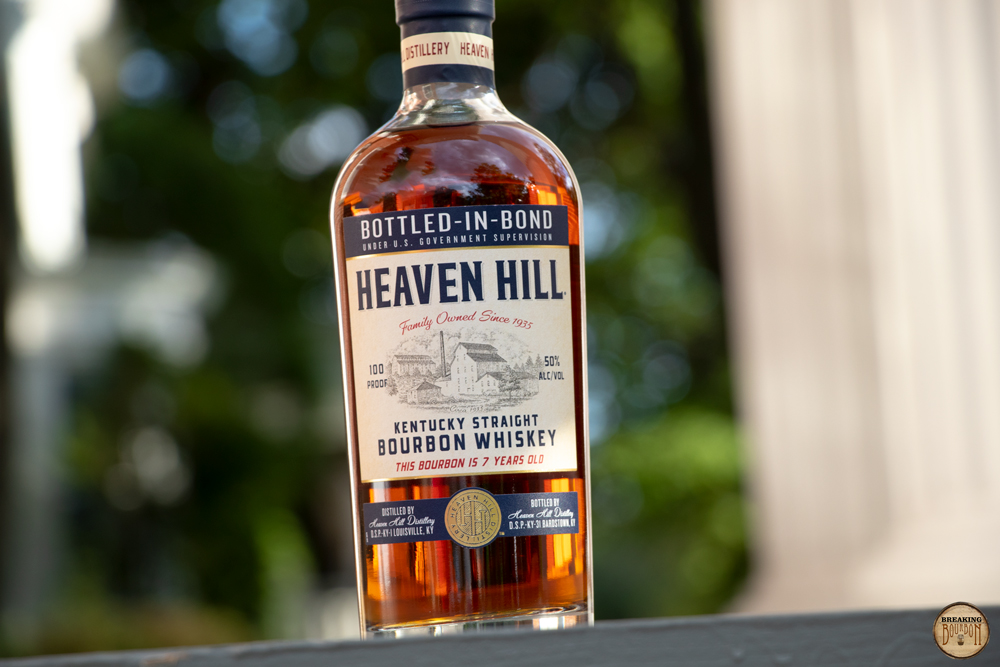 Until 2019, Heaven Hill released a 6 year old Bottled in Bond bourbon available exclusively in Kentucky. Readily available for $12-$15, we awarded it 5 barrels for value. In 2018, when Heaven Hill announced it would be discontinued, a wave a sadness was shared among bourbon enthusiasts who were upset to see it go. However, at such an incredible value, it always seemed too good to be true.

On June 24, 2019 Heaven Hill announced the details of the bourbon that would replace the now retired 6 year old fan favorite. Aged for an additional year, and sporting an updated label, the new Heaven Hill Bottled-in-Bond would become the flagship bourbon for the company. It is available in California, Texas, New York, Georgia, Florida, Illinois, South Carolina, and Colorado first. Notably Kentucky, Heaven Hill’s home state and once the exclusive state to obtain the age stated Bottled-in-Bond bourbon, is not included in the initial product release. See the company press release for more information.

Quintessential aromas of vanilla, caramel, and aged oak come forward. A trace of leather along with even fainter hints of tobacco and honey play in the background. It’s a little light considering the proof, but well balanced and pleasant overall.

Seasoned oak and spice envelop the taste buds, bursting forth immediately. Savory tobacco and leather notes come next, balanced against graham cracker and butterscotch. It has a lightweight, and somewhat dry mouthfeel. Despite this, the intensity of flavors is just right, inviting you back for more.

Medium to long, cinnamon spice and caramel sweetness find themselves in perfect balance to start it off. Oak mingles in, along with cherries and vanilla sweetness. The dryness present in the palate tapers off, allowing the sweeter notes to echo into the final moments of the finish. Nice overall, and quintessentially bourbon-esque.

Undoubtedly the biggest question is how this new 7 year release compares to its 6 year predecessor. With the same mashbill, proof, Bottled in Bond designation, and the fact that it was released approximately one year after the Kentucky-only 6 year old was discontinued suggests the only difference between the two bottlings is the additional year of aging. Not surprisingly, the 7 year is a tad drier, with a bit more oak pulling away from the sweet and spicy notes more prominent in the 6 year old. But overall, they are marginally different. Each is a quintessential bourbon in every sense of the word, and while enjoyable, unequivocally average.

While the packaging is different, the screw cap has been replaced with a cork, and a year of age has been added, the elephant in the room is this bourbon’s very similar predecessor that retailed for only $12 per bottle. A relic held over from ages past, it was one of the few remaining reminders of a time when bourbon was in far less demand than it is today. Being available only in Kentucky, it was out of reach for many and considered a sort of gift from Heaven Hill to Kentucky, especially considering its ridiculously low price. While I regularly stocked up every opportunity I had, I also frequently brought a bottle to parties, using it to introduce others to bourbon, the concept of Bottled in Bond, and then leaving it for the host to discover later. For the quality relative to price, it was easily bourbon’s best value and having one felt, well, kind of special.

At $40 MSRP and what will eventually be, presumably, a nationwide release, the bottle in review is a whole different animal. First and foremost, I want to be clear that I don’t harbor any ill-will or resentment about this towards Heaven Hill. $12 for the previous version was undoubtedly a gift, and was sure to come to an end one day. However, with that low price, respectable quality, and Kentucky-only availability somehow made it magical. With the re-release of the 7 year that magic is gone. Instead, it’s a decent flagship bourbon that will appeal to the masses. An approachable quintessential bourbon flavor profile, welcomed age statement, and Bottled in Bond designation all serve to represent Heaven Hill well. While I will likely keep a bottle on hand going forward, unfortunately I won’t get that feeling I once did each time I pour a glass. Sure it adds depth to a collection, but it’s ultimately an average value if not even priced slightly high to accommodate for some inflation in the market. Moreover, at $40 it faces steep competition including the likes of Knob Creek Single Barrel, Eagle Rare 10 Year, and for much less, Wild Turkey 101.

While the magic of its predecessor might be lost, the re-release of Heaven Hill’s flagship product will represent the company well in the eyes of the masses.

Many bourbon drinkers were disappointed when Heaven Hill discontinued the 6 year old Kentucky-only Bottled in Bond bourbon. And for some, this re-release feels like Heaven Hill simply decided they wanted to charge more. While it is curious this was not initially released in Kentucky, the remainder of the attributes associated with the re-release make perfect sense as it seemed inevitable. Those who never had the opportunity to try the discontinued version can now get a taste of what they were missing, albeit after one more year of aging and for a much higher price. However with a higher price tag and what will most likely become ready availability nationwide, I feel many will wonder what the fuss was about. Instead, what they will discover is a decent bourbon that is no longer worth getting overly excited about.

The sample used for this review was provided at no cost courtesy of Heaven Hill. We thank them for the sample and for allowing us to review it with no strings attached.

Buy Heaven Hill 7 Year Bottled in Bond at Frootbat
‍The sample used for this review was provided to us at no cost courtesy its respective company. We thank them for allowing us to review it with no strings attached.
360 video 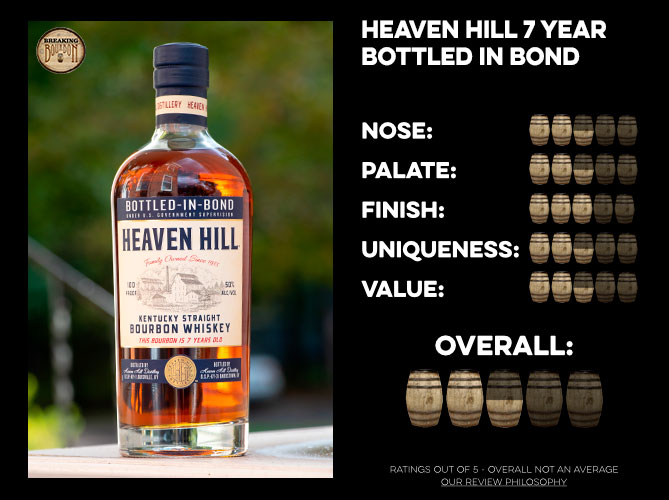 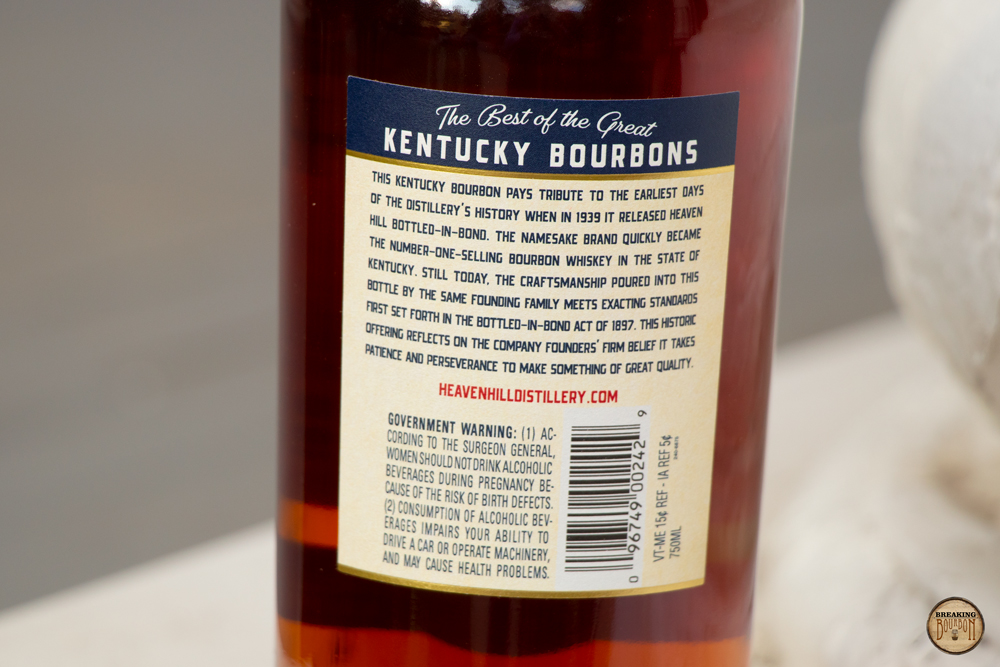 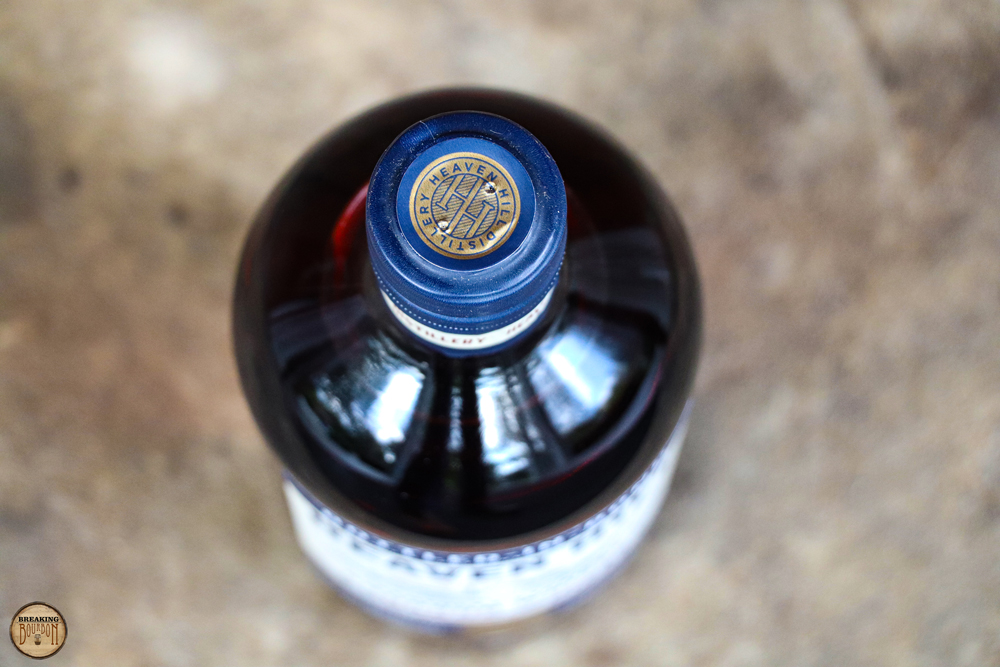 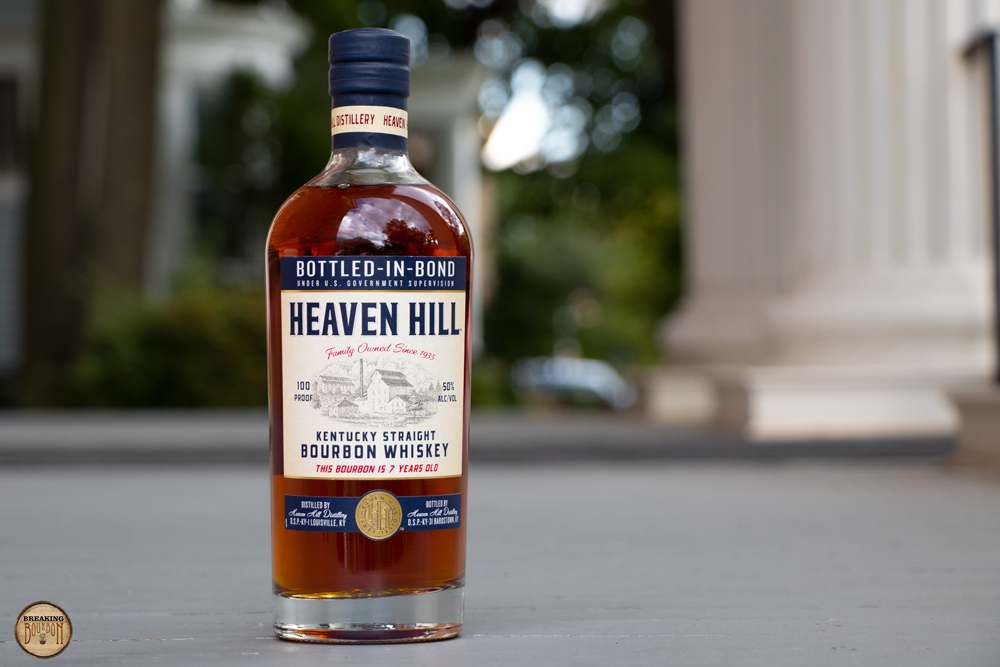