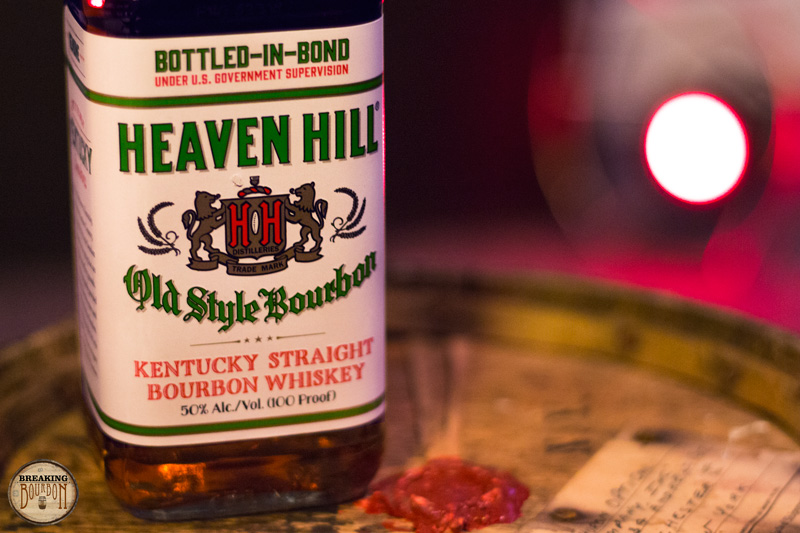 Many of Heaven Hill’s lower tier bourbons (Black, Green, White, and Gold labels) have very limited distribution outside of Kentucky. Currently the White Label Bottled in Bond (BiB) sports a 6 year age statement. Due to fluctuating stock levels, this brand has been known to frequently lose its age statement, but regain it not long after.

This is also a BiB bourbon. To be labelled BiB, the whiskey must be the product of one distillation season and one distiller at a single distillery, aged in a federally bonded warehouse under U.S. government supervision for at least four years, and it must be bottled at exactly 100 proof. Additionally, the BiB label must clearly identify the distillery where it was distilled and where it was bottled, if different.

Notes of honey, vanilla, corn, and oak are the main draw, while fainter hints of citrus, brown sugar, and leather linger in the background. It’s very hard to dislike this nose as it’s filled with sweet and agreeable flavors. Overall a nice quality to the scents, but a bit surprising how weak they come across considering the proof.

A somewhat shocking amount of oak at the forefront tends to overshadow the other flavors entirely. Butterscotch, rye spice, and a tad of mint fight for attention. The bourbon is on the thin side, but not as detrimental as you would expect. It’s smooth and has a lightweight consistency. It may flirt with being too familiar and simply average, yet it’s all-too-easy to come back for more.

A warming burn comes across on the medium length finish that’s dominated by oak notes. Cinnamon spice lingers, which is offset by sweet caramel notes, but neither gains much attention over the oak. Enjoyable finish, just not that exciting.

The bourbon itself is an average affair. It won’t surprise you, nor challenge you, yet it’s extremely easy to drink and enjoy. It’s hard to find any crippling faults with it besides its mild impact. Mainly this will serve as an everyday drinker or a table bourbon as whiskey writer Lew Bryson calls them. I have a hard time believing anyone would honestly dislike this bourbon if they enjoy drinking whiskey. But will they love and remember it? Probably not for it’s flavor, but maybe for it’s price.

Tasting this blind, I would expect the majority of people to incorrectly guess its MSRP. Too many have spent their formative years drinking way-to-cheap vodka and rum to have any amount of respect for a similar priced whiskey. Many bourbon consumers have been conditioned to exclude anything on the bottom shelf at a store, which generally falls in the $15 or less category. The fact that this can still be bought for under $15 with a 6 year age statement, and be of decent quality will shock even a seasoned whiskey drinker. Sure the whiskey itself is a tad thin and the flavors aren’t as pronounced as much as one would like, but at 100 proof and with almost no alcohol notes for a bourbon this inexpensive, you really have to try hard to find something to dislike with this whiskey.

A quality bourbon that might not blow your mind, but the price sure will.

The fact that Heaven Hill BiB can be found for less than $15 would shake my world if I were a craft whiskey distiller. How does one compete against a product like this? I remember reading a while ago a quote that said whiskey drinkers should consider themselves lucky that they are able to purchase a bottle of their favorite type of spirit, one that’s been aged for a number of years, that is of decent quality, and at a relative low price. Heaven Hill BiB is a prime example of this: a Bottled in Bond, 6 year old bourbon for around $12. Do I feel lucky? I definitely do with a bottle like this. The real shame is how hard this is to find outside Kentucky and that most people won’t be lucky enough to get to try it.

The sample used for this review was provided at no cost courtesy of its respective company. We thank them for allowing us to review it with no strings attached.
360 video 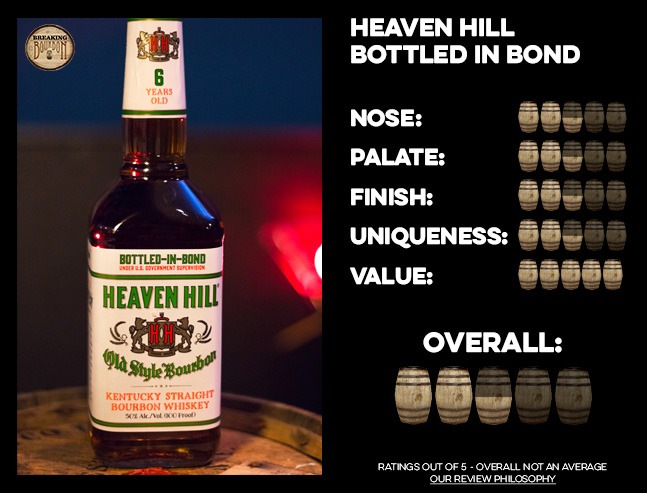 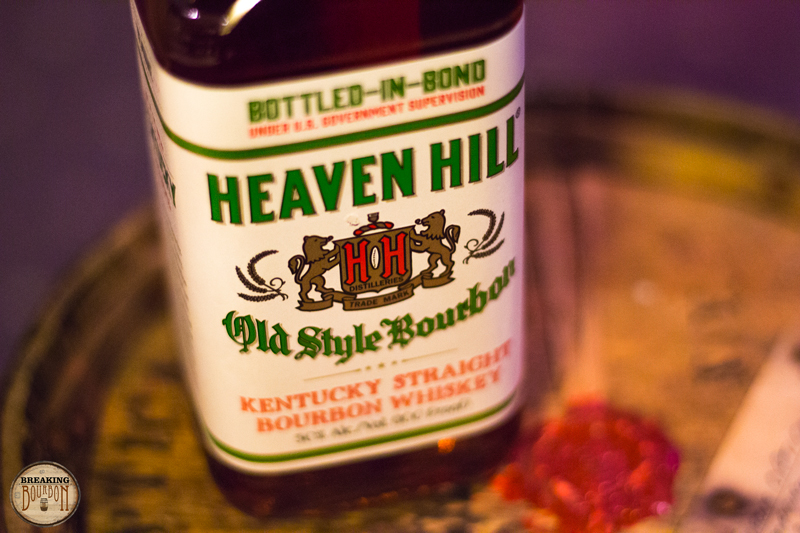 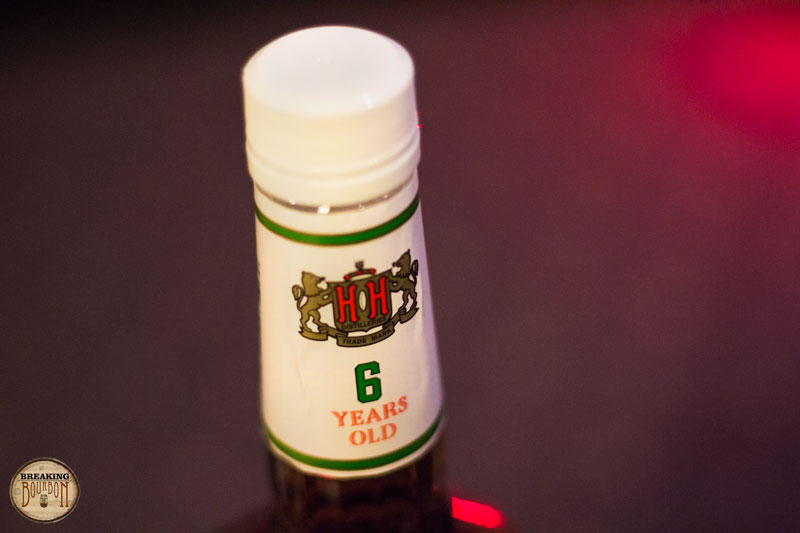 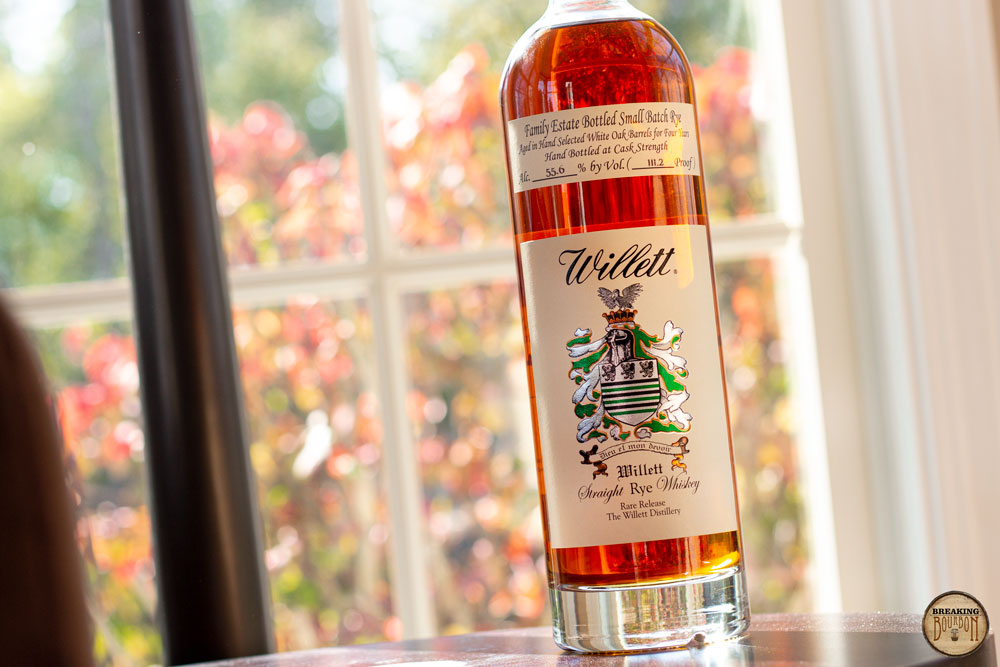