Equal amounts of vanilla and oak form the palate’s foundation, with light brown sugar, caramel, and a fruit salad-like pop of sweetness joining in. The oak remains throughout, but is kept in check thanks to the palate’s fruitier side. The result is a very likable medium-bodied palate that is a crowd-pleaser at heart.

Heavy oak pulls forward during the finish and quickly overtakes many of the palate’s fruitier flavors. There’s a dankness that lingers, and while it’s not overpowering, it is quite noticeable. It doesn’t completely derail the finish, but takes an excellent bourbon down a notch.

Outside of its age statement, Elijah Craig 18 Year has always suffered from making a lasting impression. It often straddles the line between good and great, but it's rare to come across a particular bottle that’s really exciting. Elijah Craig 18 Year’s impact is also muted thanks to the continued impressive showings from Elijah Craig Barrel Proof. It doesn’t help that high proof bourbons are still very much in vogue, and the 18 Year’s 90 proof just seems lacking and a heldover relic from the past.

As a result, year after year I’ve never felt the urge to pick up this annual release. The lack of excitement surrounding the brand all but negates its impressive age statement. This seems strange as there isn’t another ongoing 18 year old bourbon on the market. Excitement somehow trumps high age statements I guess, which is too bad since I’ve missed out on a highly drinkable bourbon for many years.

Of course drinkable can mean many things to many people. Elijah Craig 18 Year isn’t going to shock anyone with a one-of-a-kind tasting palate. It’s predictable and straightforward, yet features enough complexity and enjoyable flavors to win over just about anyone. It’s typical for the grass is always greener mentality to kick in, and lose sight of a traditional style bourbon that delivers quality over flash.

When discussing Elijah Craig 18 Year, If you’ve been around bourbon long enough, it's impossible not to mention its old price for how shockingly low it used to be. Even a decade ago, many bourbon drinkers knew $50 for an 18 year old bourbon was a steal. When its price ramped up to $100, then $120, and now $150, many who knew the brand at a cheaper price had a hard time forking over the extra dough for it - even if deep down they knew it was worth it.

Now at $150, Elijah Craig 18 Year remains a good value for a bourbon of its age. The majority of limited release bourbons from major Kentucky distilleries come in between $125-$175, and the majority of them don’t include an equal or higher age statement. The 18 Year’s oak can be trying at times depending on the barrel it was pulled from, and its proof too low, but overall it’s a fairly consistent quality release that you know exactly what you're getting for your money.

Elijah Craig 18 Year may forgo uniqueness for constancy, but in return delivers an impressive age statement, good value, and drinkability.

Elijah Craig 18 Year certainly has its fans, but it's never been a bourbon that has lit the world on fire. So much of this is due to its lack of strong identity, both in its flavor profile and marketing. As a single barrel, quality can vary and Heaven Hill doesn't make a big deal about sourcing their best barrels for it. It also isn’t a carefully crafted blend like a Four Roses Limited Edition that can help drive interest to a particular release. Its bottle design had been boring for years and on the wrong side of old fashioned before its current update. This has resulted in a product that has never quite reached the fever pitch with bourbon drinkers that it probably deserves.

I’ve had Elijah Craig 18 Year over the years and though I felt it hit a consistent high quality bar, I usually wasn’t generally excited by it. While the product hasn’t drastically changed much, the market has. Bourbon is filled with gimmicks, high proof releases, flashy craft distilleries, and celebrity master distillers. Elijah Craig 18 Year is a product that isn’t any of these things and simply just is. It’s an old faithful when it comes to limited releases with its crowd-pleasing flavors, consistent high quality, impressive age statement, and decent availability for a limited release. It’s easy to be swayed by the new kid on the block, but sometimes it's worth revisiting an old friend.

Buy Elijah Craig 18 Year Single Barrel at Frootbat
‍The sample used for this review was provided to us at no cost courtesy its respective company. We thank them for allowing us to review it with no strings attached.
360 video 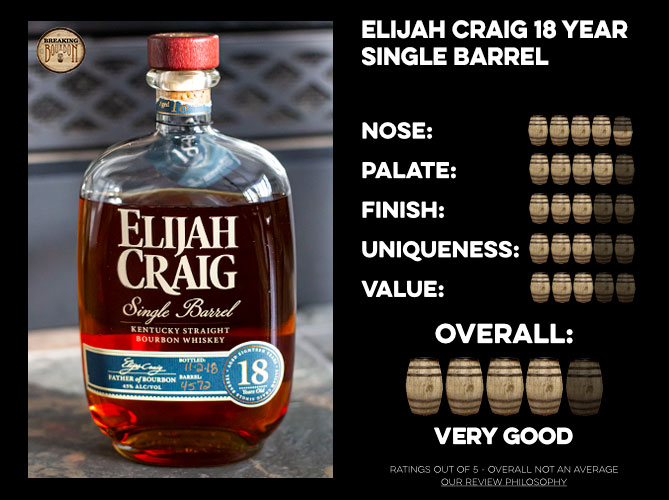 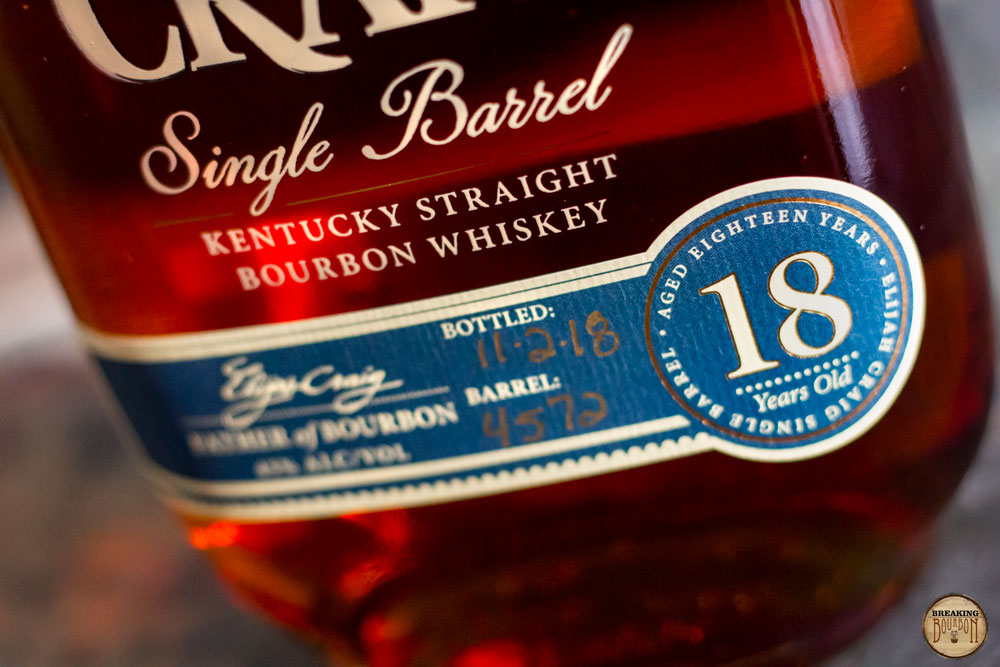 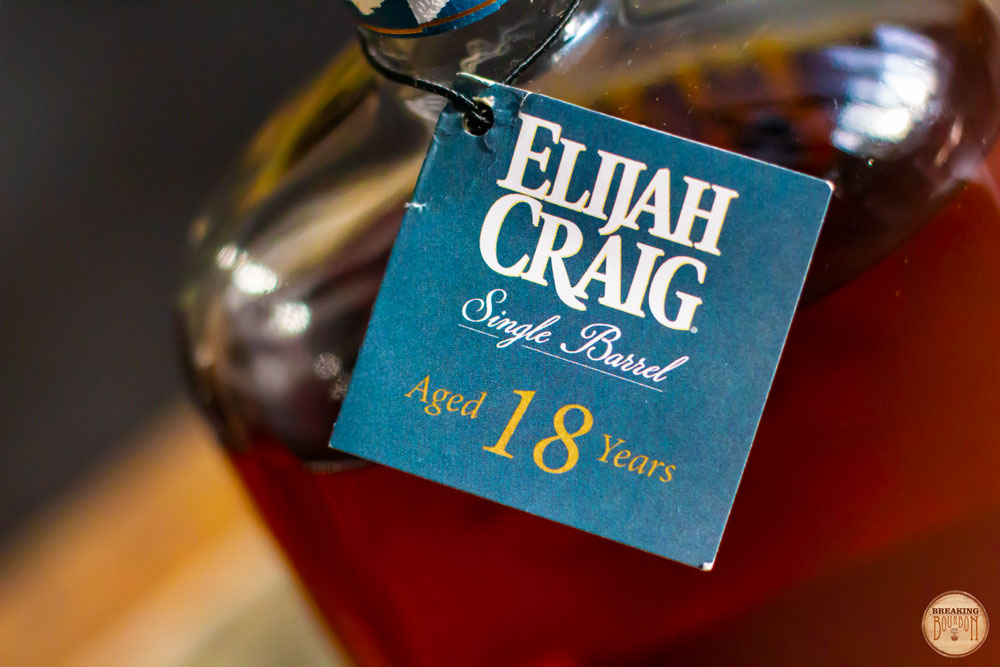 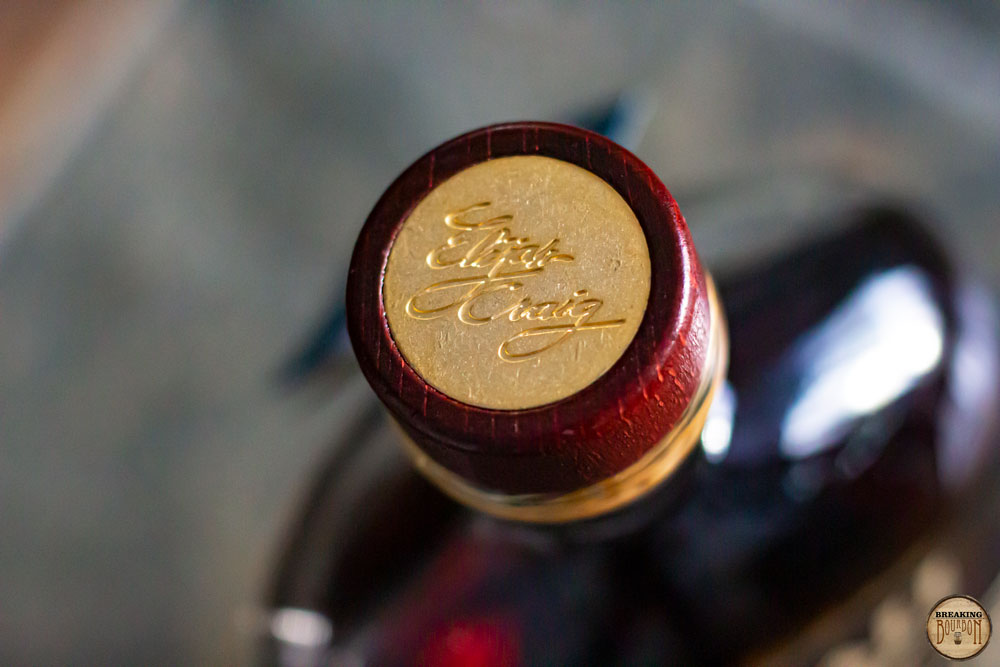