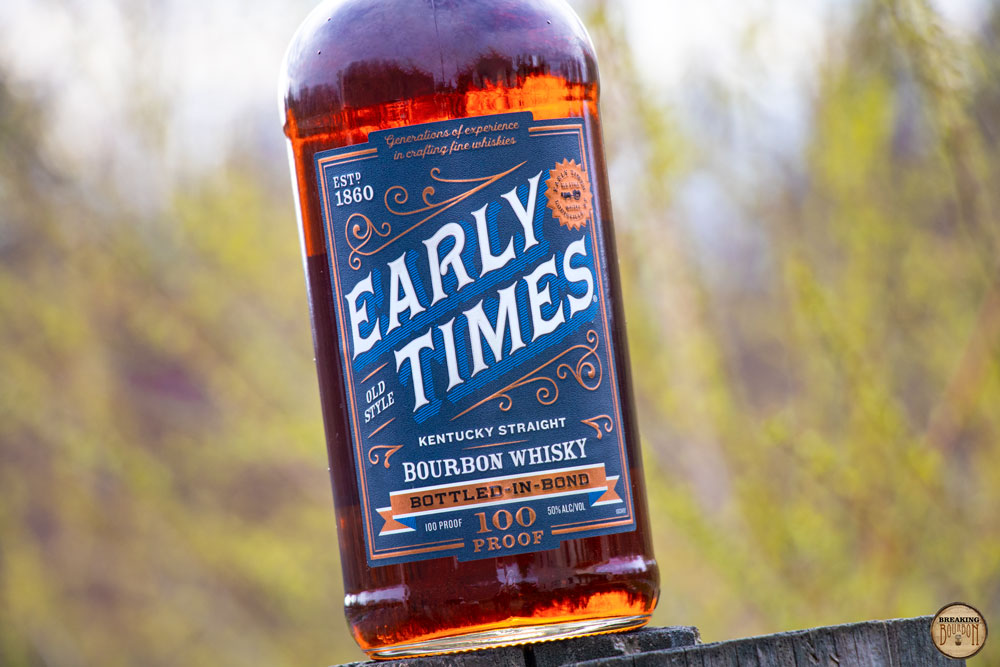 Early Times was created by John Henry “Jack” Beam, son of David Beam, Jim Beam’s brother. Jack left his father’s distillery in 1860 at the age of 21. He built his own distillery near Bardstown, Kentucky and started distilling Early Times there. Jack later passed away in 1915 at the age of 75 and upon his passing the distillery ceased operations.

Unfortunately, during the difficult times endured by the industry in the 1970s and 1980s, the Early Times brand changed from bourbon to blended whiskey, leaving the Bottled in Bond label behind. Early Times “Old Style Kentucky Whisky” was born, which was a blend of straight bourbon and light whiskey.

Early Times Bottled in Bond was re-released as a limited edition in July 2017 to limited markets. Since then, distribution has expanded to include additional markets across the United States which currently includes Arizona, Colorado, Georgia, Illinois, Indiana, Kansas, Kentucky, Michigan, North Carolina, Ohio, Oregon, South Carolina, Tennessee, Texas, and Washington. Distribution is slowly expanding to the rest of the United States.

To be labelled Bottled in Bond, the whiskey must be the product of one distillation season and one distiller at a single distillery, aged in a federally bonded warehouse under U.S. government supervision for at least four years, and it must be bottled at exactly 100 proof. Additionally, the Bottled-in-Bond label must clearly identify the distillery where it was distilled and where it was bottled, if different.‍

Subtle hints of honey and orange peel fade into a caramel backdrop. While the nose is characteristically sweet and approachable, it’s quite light overall, requiring a swirl of the glass and hard pull to dissect even these most prominent scents.

Sweet caramel and candy corn coat the mouth, enveloping the tongue with a creamy, rich texture. Citrus and vanilla mingle in, along with a very subtle tobacco note. A light rye spice teases as you swirl the bourbon around coating the inside of your mouth. It’s pleasant and arguably impossible to dislike, but doesn’t quite have enough oomph to elevate the bourbon to greater heights.

The spice picks up in the finish, with a peppery-rye pop that’s followed by a developing sweetness comprised of vanilla and raw sugar. The spicy-sweet mix finds a nice balance, making for an enjoyable and long lasting finish. The finish is the highlight of the sip, pulling what is otherwise a pleasant but average experience well into above average territory.

The Early Times brand has been owned by Brown-Forman since it was purchased in 1923. While it’s born from the same distillery as many of Brown-Forman's brands, the Early Times bourbon mashbill is slightly different than the more common 72% corn, 18% rye, and 10% malted barley mashbill used to make bourbons that comprise the Woodford Reserve and Old Forester lineups.

Because it's bottled in bond, this variation of Early Times can be compared to other bottled in bond bourbons that are likely at or near the minimum 4 years old required by law. One in particular that comes to mind is Old Grand-Dad Bottled in Bond, a fan favorite with a long running history as well. By comparison, Early Times Bottled in Bond is more mellow, offering a softer and more subtle flavor profile than the spicier more cinnamon-heavy flavor offered by Old Grand-Dad.

In characterizing Early Times Bottled in Bond's flavor profile in a general sense, the observation that it comes across as mellow holds true against other brands as well. Understanding what makes Early Times' flavor profile a bit different leads back to its production process. In addition to a unique mashbill, Early Times is also crafted with a proprietary yeast strain. Notably, when the brand first started in 1860, Jack Beam made it by cooking the mash in small tubs and then boiling the distiller's beer in a copper pot still over open flames. Tasting an older bottle of Early Times (pictured in the gallery below), it is surprising how creamy and unusual the mouthfeel is. This characteristic remains, though less so, in the current Bottled in Bond variation.

An important fact to note is Early Times Bottled in Bond is only released in 1 liter bottles, a full ⅓ more bourbon than what is found in the more standard 750ml packaging. Normalizing the $25 price tag for a liter to the more standard 750ml equates to a price of only $18.75 per 750ml worth of bourbon. Put simply, this is a fantastic deal. As we see distribution expand to different parts of the country and distributors and states set their baseline, pricing of course will vary from market to market. However, because this is a drinker’s bourbon in every sense of the word, I’d argue the value would quickly fall off as the markup increases. Entering into just a slightly higher $30 price range reveals plenty of options that offer up a more interesting sipping experience, making Early Times' flavor profile a bit less exciting by comparison.

Early Times Bottled in Bond is a revitalized historic brand extension that offers an easy-to-like drinker's bourbon at an even easier-to-like price.

Early Times Bottled in Bond succeeds at what it sets out to do - appeal to many at a fantastic price point. The brand brings with it a long and storied history, an added bonus for anyone who thinks beyond the glass. However, while the flavor profile and overall drinking experience is enjoyable, it is really the combination of a great price and approachable flavor profile that make this worthwhile. Given the fact that we’ve seen great value bourbons become overhyped and subsequently overpriced - due to either the producer increasing MSRP or retailers’ perception of high demand - it is important to note that Early Times Bottled in Bond will ultimately lose its magic should that occur. Put simply, Early Times Bottled in Bond is absolutely worth seeking out and having as a regular on your shelf, just not if you have to overpay for it.

Editor's Note: When this review was originally published, the MSRP was stated at its previous amount of $23. The review was updated on 4/21/2020, along with applicable ratings, to reflect the now current MSRP of $25.

Buy Early Times Bottled in Bond Bourbon at Frootbat
‍The sample used for this review was provided to us at no cost courtesy its respective company. We thank them for allowing us to review it with no strings attached.
360 video 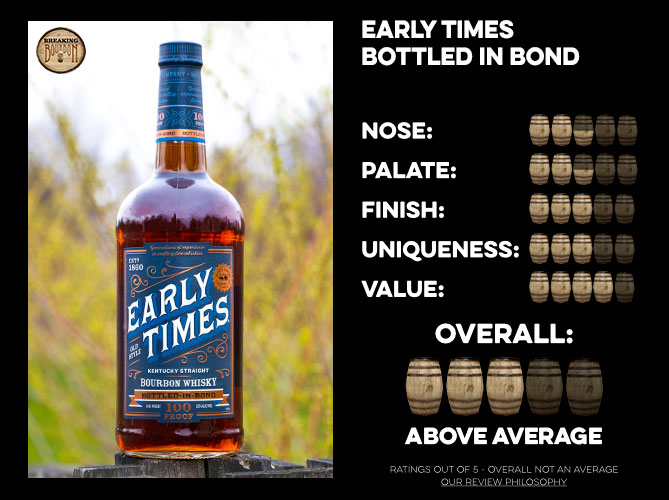 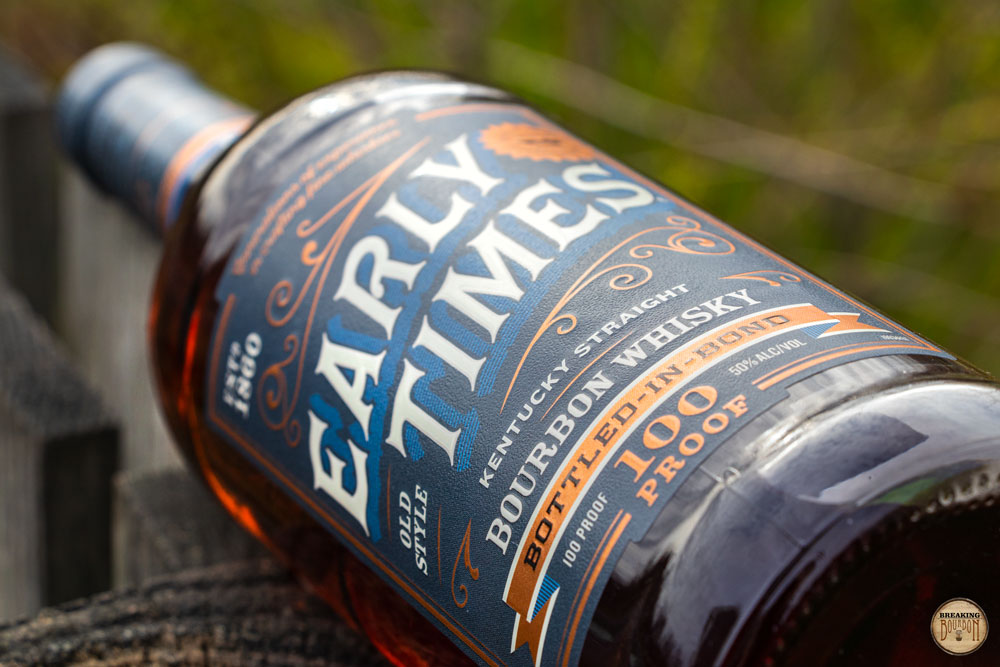 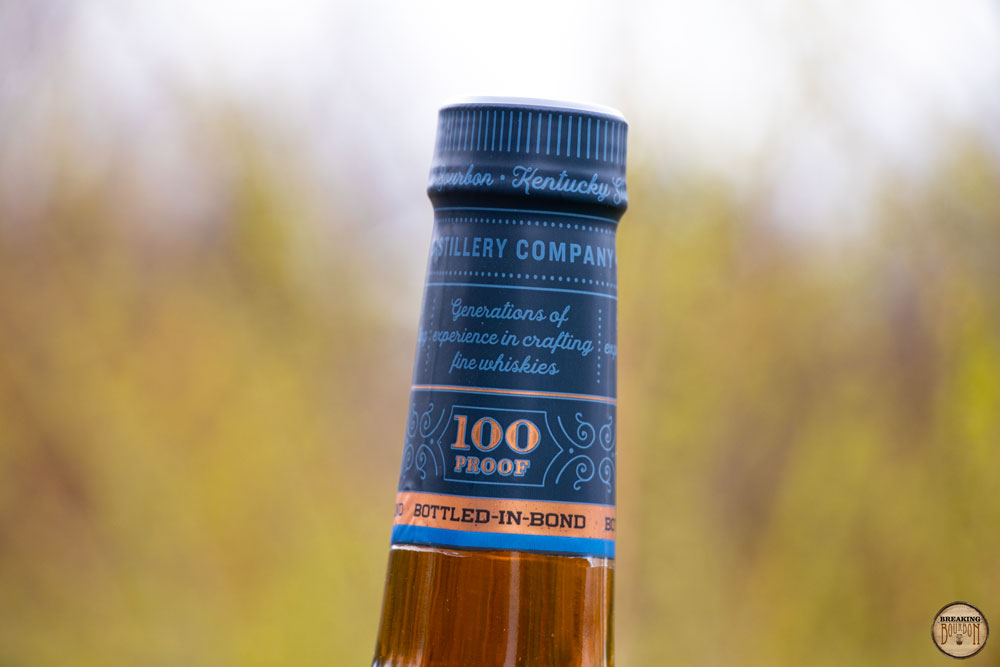 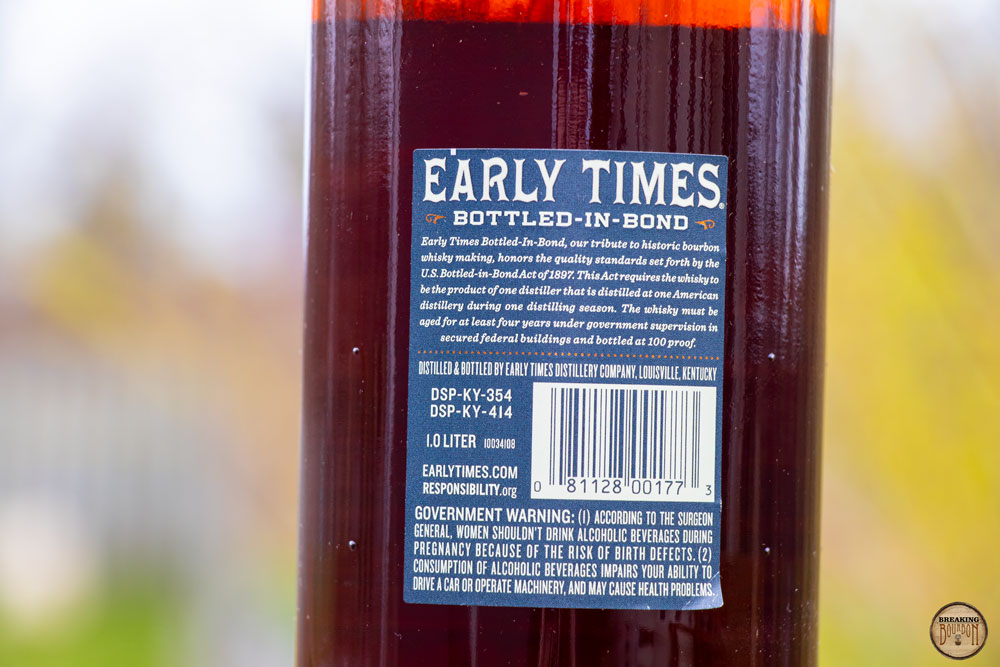 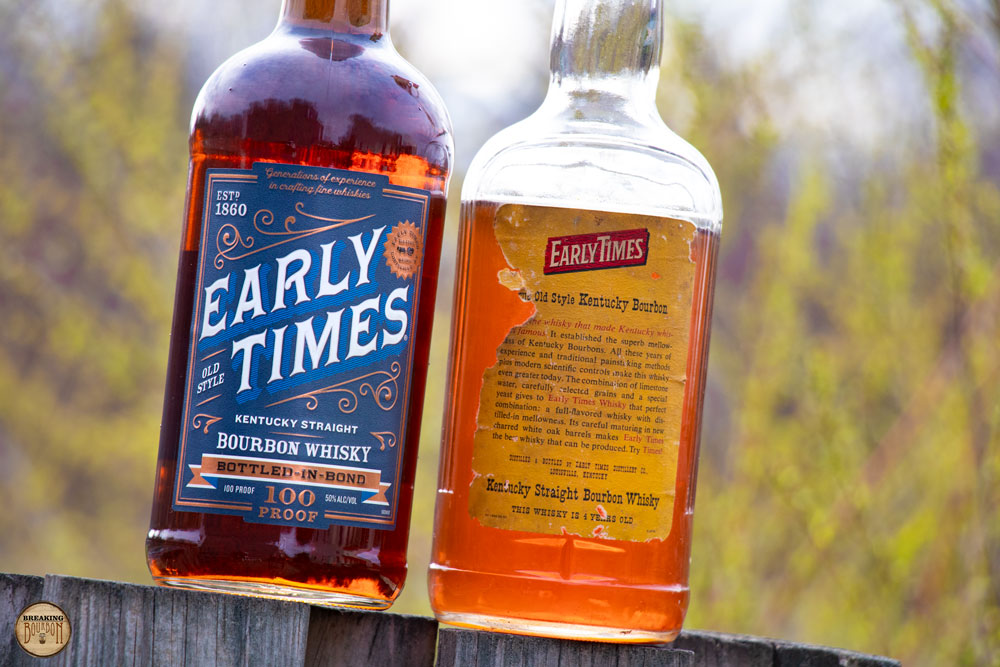