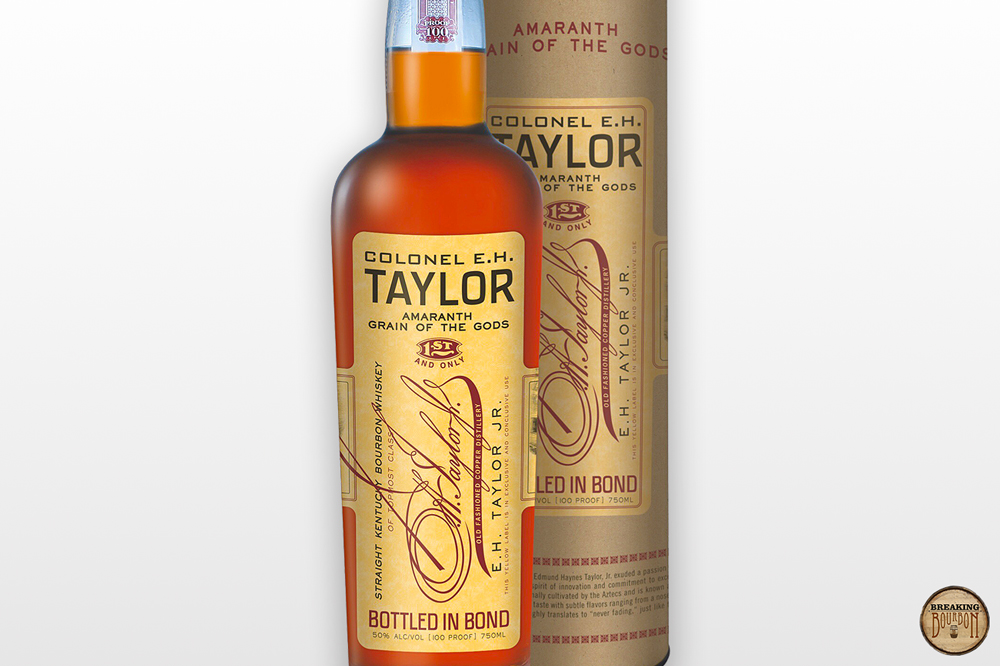 Age: NAS (Over 10 years per the company press release)

Amaranth “Grain of the Gods” is the tenth release in the E.H. Taylor, Jr. lineup. The standard lineup includes Small Batch Bourbon, Single Barrel Bourbon, Barrel Proof Bourbon, and Straight Rye. According to the company Press Release, Amaranth was aged over 10 years and will be a one-time only release that will start hitting markets in late July.

Like most E.H. Taylor releases, Amaranth Bourbon is Bottled-in-Bond. To be labelled Bottled-in-Bond, the whiskey must be the product of one distillation season and one distiller at a single distillery, aged in a federally bonded warehouse under U.S. government supervision for at least four years, and it must be bottled at exactly 100 proof. Additionally, the Bottled-in-Bond label must clearly identify the distillery where it was distilled and where it was bottled, if different.

Caramel, butterscotch, baking spices, and seasoned oak come together in a rich, fragrant presentation. The overall aroma was borderline incredible with the first pour, but seemed to taper off in its intensity with subsequent pours on the following days. Nevertheless, ethanol is kept in check and the aroma remained complex, inviting, and most notably, interesting with a unique quality I just can’t quite put my finger on.

Its thin mouthfeel is immediately noticeable, but this is countered with a vibrant set of flavors. Butterscotch, honey, caramel, summer fruits, and again a touch of oak. It’s a noticeable step down from the intensity of the aroma, but still enjoyable.

Sweet flavors tease at first, but traces of leather and tobacco quickly develop as well. Some bitterness follows along with a tannic note. It’s medium-length at best, and feels somewhat abbreviated and subpar compared to the rest of the sip.

Buffalo Trace has many experiments in the works, and in recent years has chosen to honor E.H. Taylor by releasing limited experimental variations of the brand. Attributing this to Taylor’s persona, Buffalo Trace has stated it “honors Taylor’s enduring spirit of innovation and commitment to exceptional whiskey.”

The tenth unique release in the Taylor lineup, Amaranth is the sixth special release and the second to use a unique mashbill. However, while Four Grain had four grains in the mashbill, they still remained the most commonly used grains - corn, rye, wheat, and malted barley. Amaranth is the first of its kind, with no other previous bourbon using the grain in its mashbill. This is surprising considering distilleries like Corsair have released Grainiac (9 grain mashbill) and Insane in the Grain (12 grain mashbill) whiskeys - none of which used amaranth. That being said, Buffalo Trace Mashbill #1 is believed to be 10% rye or less, and since this bourbon used the #1 mashbill with amaranth in place of rye, the percentage of amaranth grain is still relatively small.

Amaranth grain is most likened to wheat, and was once a staple of the Aztecs, used in numerous food items. They also used the grain to form images of their gods during the sacred month of Huitzilopochitli, and then at the end of the month ate them in order to take in the gods, which explains the origins of this bourbon's name. Currently, amaranth is popular in gluten free cooking.

Whether it’s the amaranth grain or other contributing factors, the resulting whiskey’s flavor profile deviates from the norm. It presents like a wheated bourbon, but there is a quality I just can’t quite pinpoint. It’s most prominent in the nose, and as a result the most interesting part of this whiskey.

It might be hard for those reading this to believe, but at one time the full four-bottle standard E.H. Taylor, Jr. lineup was regularly available, even Barrel Proof if you looked hard enough. Sitting amongst the other bottles, both its packaging - tall nicely labelled bottles in tubes - and price felt premium. I considered it a pioneer into regularly available premium bourbon and American whiskey, a category that had hardly been defined at that point in time. Soon after, limited E.H. Taylor releases gained momentum, and before long any limited release under the brand has been met with a rabid fanbase.

Like most other limited released they’ve done, Buffalo Trace has kept the MSRP of Amaranth relatively low, in this case $70. But with the three tier system in play and demand at unprecedented levels, the true cost for a retailer to have a bottle (or a few) of Amaranth in stock may be much higher realistically speaking. Additionally, since the time I considered E.H. Taylor a premium brand pioneer, retailers have grown more savvy. Most see it coming and many know it will likely command a premium in the secondary market, making markup hard to pass up. As a result, unless release numbers are excessive, few bottles will actually see store shelves, and if they do, many won’t be priced at MSRP. To that end, $70 for a one-time one-of-a-kind 10+ year old limited release from a strong brand is an easy buy for this whiskey, and if I see any at or around that price you can bet I’ll be buying as many as I can find.

However, the bourbon inside the bottle cannot be ignored, and it’s at best a fair price point when its limited status is stripped from the equation. Next to E.H. Taylor Single Barrel, Amaranth’s nose is better and it is more unique overall, but it’s not necessarily a much better bourbon.

The first of its kind, Amaranth is a unique exploration in an alternative grain that succeeds in being different enough to capture fans’ interest.

I was prepared to be disappointed with Amaranth, but I wasn’t. More often than not I’ve found unique mashbills surprisingly boring, in what seems like an interesting idea results in so many flavors that everything just becomes muddled. Others have just been letdowns. In this case, the relatively small amount of amaranth grain in the mashbill seems to have produced enough variation from the norm to capture my interest.

Unfortunately, the fact of the matter is, how this bourbon tastes probably doesn’t matter when it comes to the insane prices people will likely pay for this. The fever will drive demand through the roof. We don’t know how many bottles will be released, but I would bet many won’t actually see the shelves, so regardless of the actual release number it won’t feel like very many are out there. However, if I can stress anything it would be that this is an interesting one-off release, but it really ends there. Don’t pay a silly price for it. Pick up one, or a few, at or around MSRP if you’re lucky enough to find any. Then pop the cork. The true value in these experimental releases is actually tasting the resulting whiskey, and I can bet Edmund Taylor would have wanted it that way.

The sample used for this review was provided at no cost courtesy of Buffalo Trace. We thank them for the sample and for allowing us to review it with no strings attached.

Find E.H. Taylor Jr. Amaranth Grain of the Gods at Frootbat
‍The sample used for this review was provided to us at no cost courtesy its respective company. We thank them for allowing us to review it with no strings attached.
360 video 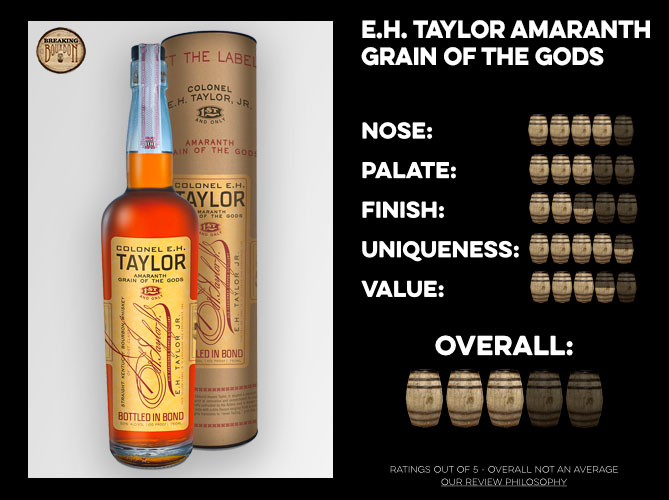