Blanton's Straight From the Barrel 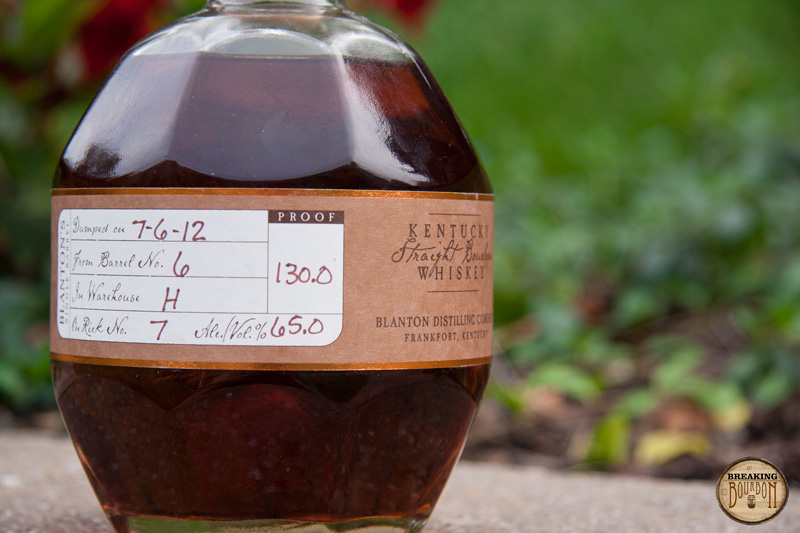 Mashbill: Corn, Rye, Malted Barley - (Exact ratios not provided, however this uses the Buffalo Trace Mashbill #2 which is said to be 12-15% rye)

Find Blanton's Straight From the Barrel at Frootbat

This bourbon whiskey was dumped on 7-6-12 from Barrel No. 6. It was stored in Warehouse H on Rick No. 7. The registered Bottle No. is 53. The proof on the Straight from the Barrel edition varies by bottle depending on the barrel. The bourbon comes off the still at 140 proof and enters the barrel at 125 proof. This particular bottle being reviewed comes in at an even 130 proof. Straight from the Barrel edition is currently only offered in international markets and in some domestic duty free stores. Due to only being available in the international marketplace, fluctuation in price based on foreign currency exchange rates is normal.

This bourbon was bottled specially for sale in the U.K. and is only sold in 700ml bottles. It was purchased for £70 when the dollar was trading at $1 to £1.55.

Raisins, dried fruit, orange citrus zest, and lightly toasted oak all merge together in a perfect blend. I can best describe it as warming and inviting, like a toasty wood burning fire on a cold winter’s day. It’s just a perfect blend of everything you love about the nose on Blanton’s, just enriched and greatly amplified. Taking a big breath in the alcohol is definitely upfront and noticeable, as should be expected for a 130 proof bourbon. While the alcohol isn’t overpowering, it definitely makes itself present and takes away ever so slightly from the experience.

While the nose underplays the fact that this is 130 proof, the palate definitely brings you right back to reality. This is a big, bold, rich bourbon that’s packing some heat. Ever so dry, the palate brings through a rich, heavy dose of oak along with vanilla, light honey, butterscotch, and plump juicy raisins. You really are contending with the heat though to pick out these flavors. Adding a few drops of water helps slightly reduce the heat and really pulls out the flavors in the palate.

The finish starts just like the palate, which in a word is HOT. The moment I finish taking my sip, my mouth instantly explodes into a ball of fire as the alcohol takes over. Ironically that burn is really just contained to my mouth and doesn’t travel down my throat or into my stomach like some other barrel proof bourbons like George T. Stagg are known to do. The finish is definitely drier, however it carries with it a nice flavor profile of preserved peaches, light vanilla, raisins, and oak. Even adding a few drops of water does little to subdue this fiery beast. It’s a shame because the heat overpowers the flavors just a little too much in this case to really appreciate all this has to offer.

Blanton’s Straight from the Barrel (SFTB) flavor profile is a tasty enhanced bolder Blanton’s, though the heat from the proof greatly impacts the overall experience by taking away from the palate and more so the finish. Additionally, I’m not blown away tasting anything so unique that you might find in a George T. Stagg or a William Larue Weller. That being said, it’s really interesting to see not only what Blanton’s tastes like at full strength, but also how great of a job Buffalo Trace does in taming this beast down to the standard Blanton’s Original Single Barrel that’s lower cost and more readily accessible in the U.S.

Since this is an international only bourbon, the price will be tied to foreign currency fluctuation for anyone looking to import or buy abroad. When I reviewed Blanton’s Gold, for example, it was selling at almost double the cost of two bottles of standard Blanton’s, whereas now it’s only one and a half times the amount. That being said, Blanton’s SFTB consistently sells for the same price one could snag two bottles of original Blanton’s for, with change left over. Not even taking into account the cost of acquiring through either travel or import fees, apples to apples it also sells for higher than the bottles in the Buffalo Trace Antique Collection (BTAC) which this can best be compared to.

While the price may be higher, it wins points on being much more available than the Buffalo Trace Antique Collection. Released throughout the year, you can usually find a bottle online in the foreign market if you look hard enough and are willing to pay import fees. Additionally, it comes back to being one of the few single barrel, barrel proof offerings on the market and one that delivers an experience that helps justify the higher price.

Big, bold, and definitely hot…why isn’t this a part of the Buffalo Trace Antique Collection yet?

As we’ve stated on the site in the past, in all actuality this could be a contender for the 6th addition to the Buffalo Trace Antique Collection, or at least an alternative for anyone having trouble locating BTAC. Its flavor profile is bold, it’s offered as a single barrel, barrel proof bourbon, and offers a unique drinking experience. It’s a shame that Buffalo Trace doesn’t offer this in its own domestic marketplace as many would snap this up as quick as they do the bottles in the Buffalo Trace Antique Collection. Granted the price would be a little higher than the bottles in the Antique Collection, it’s doubtful that would slow many down in today’s marketplace.

For me, Blanton’s SFTB isn’t quite as well balanced of a drinking experience as what Blanton’s Gold delivers. The heat slightly off balances the palate and finish, and when the price difference is taken into account, I’d personally rather have a bottle of Blanton’s Gold to enjoy with money left over in my pocket. That said, I know that this is a bourbon that is on many individual’s list to try, and I do highly suggest seeking it out to experience it. The heat in the palate and finish may run rampant and would be served better if it was tamed, but if you like Blanton’s, you’re in for a treat to experience it at barrel strength. Additionally, if you regularly miss out on the BTAC release each year, it’s a nice alternative that still delivers a great unique experience from Buffalo Trace.

Find Blanton's Straight From the Barrel at Frootbat
‍The sample used for this review was provided to us at no cost courtesy its respective company. We thank them for allowing us to review it with no strings attached.
360 video 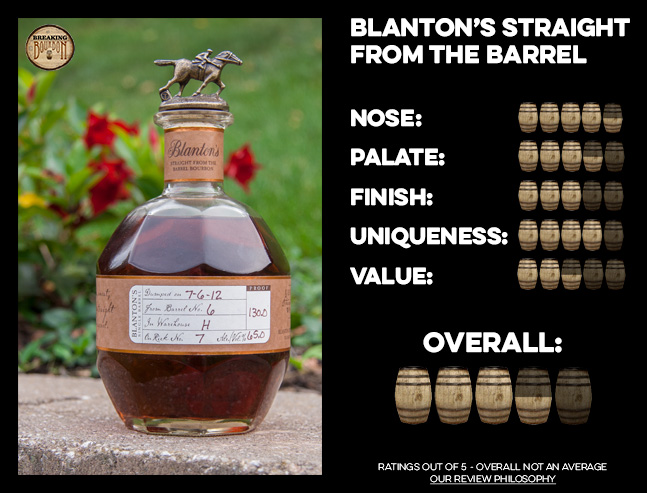 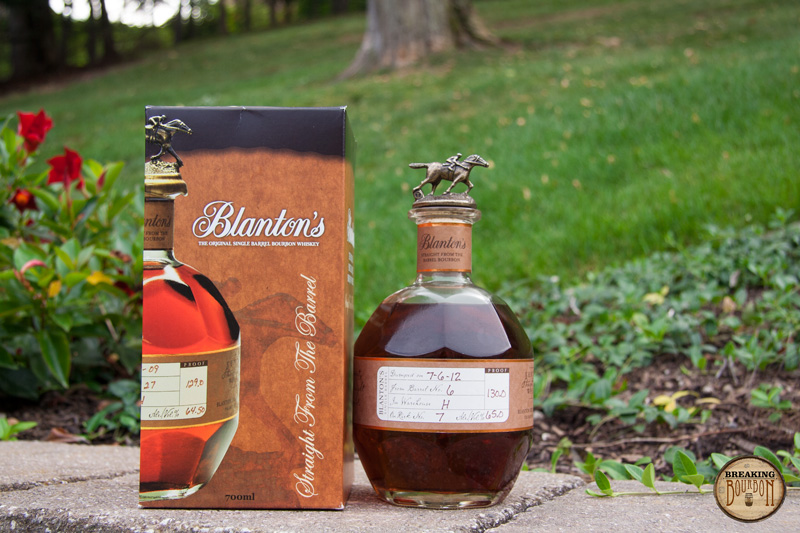 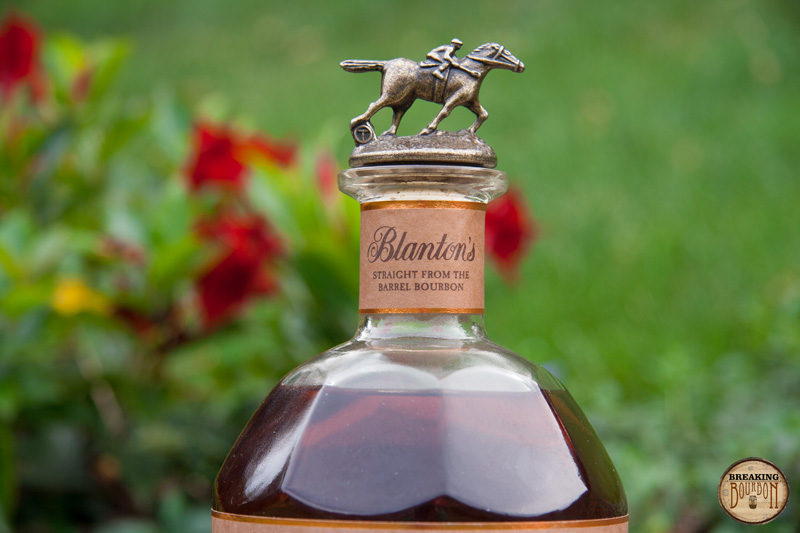 COMMENTS
Blanton's Straight From the Barrel
Also Check out