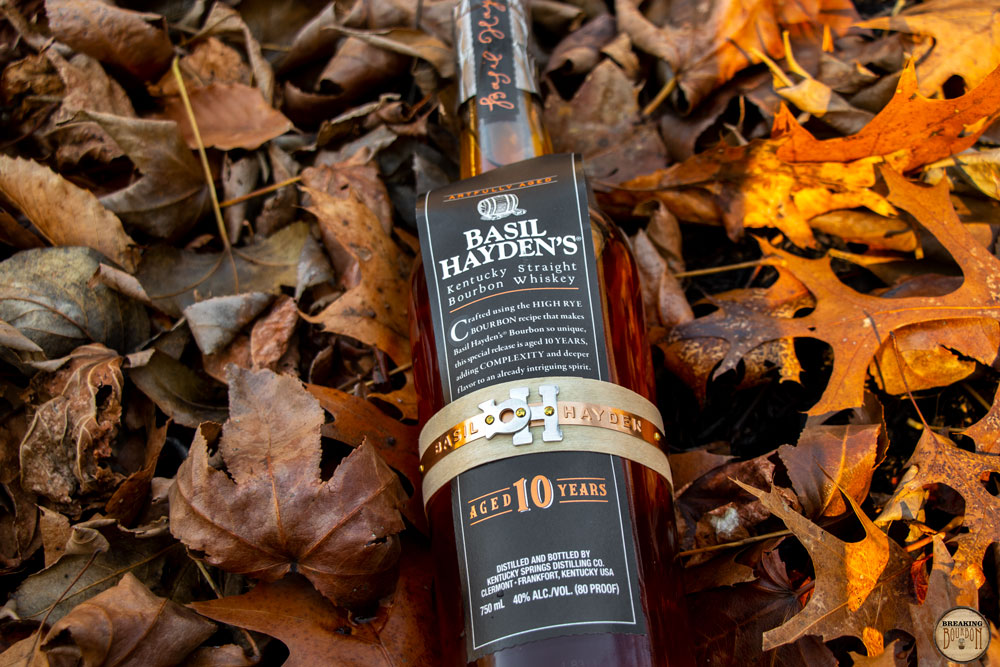 The nose brings doses of summer fruits and oak. Additionally, there’s a light hint of honeyed vanilla added to the mix. The aroma is less floral than I find standard Basil Hayden’s to be, with oak coming through more predominantly. Sadly, the low proof results in a lack of overall depth.

The palate continues to be light due to the 80 proof that Beam bottles this at. The good news is that this lower proof really allows you to roll the sip around in your mouth for a long time to try to pick out flavors. The bad news is that oak and sweet vanilla form the entirety of the palate, which isn’t what you’d expect from a 10 year old bourbon.

Like its younger sibling, Basil Hayden’s 10 Year’s finish is short and almost nonexistent, ending almost as soon as it starts. Light oak dominates with an ever-so-slight touch of sweetness. For a 10 year old bourbon the lack of depth is surprising and unfortunate.

It’s great to see Basil Hayden’s add an age stated bottle to their lineup. In 2014 Beam removed the 8 year age statement from Basil Hayden’s making it a no age statement (NAS) bottling, instead labelling it “Artfully Aged.” It’s now rumored to be bottled at around 6-7 years old. An extra few years would hopefully bring some needed definition to Basil Hayden’s flavor profile.

While I didn’t have an old 8 year old bottle of Basil Hayden’s to compare it against, I did compare it side by side with the standard NAS bottling. Surprisingly, all around the 10 year variant was lacking compared to the NAS bottle. It would have been great if Beam took this opportunity to also up the proof even if only 10 points to help enhance the sip. Instead you’re left with a bourbon that fades into an over-crowded field faster than you can blink an eye.

On its own a 10 year old bourbon for $60 isn’t completely out of line with today’s market pricing. However once you add in the fact that this bourbon is only 80 proof and delivers a completely underwhelming experience, the price tag now becomes concerning. While a limited release can usually justify a higher price tag, you have to actually deliver on the bourbon in the bottle. In this case Basil Hayden’s 10 Year falls way short. Yes it’s only about $15 more than a standard Basil Hayden’s bottle, but a 25% markup is just not able to be justified here.

The extra time in the barrel seems to have taken away whatever redeeming quality Basil Hayden’s had going for it.

When it was announced that Basil Hayden’s was gaining an age statement in a limited release form my interest was quickly piqued. I was disappointed to see it still retained the low 80 proof point, yet I still held out hope that the extra time in the barrel would give a little extra depth to the standard Basil Hayden’s profile. In the end though, the exact opposite happened. The extra time in the barrel seems to have zapped away what little life Basil Hayden’s had going for it. While it’s not a flavor profile that will make you cringe, it’s instead just very one dimensional and almost non-existent at some points. This just goes to show that adding more time in the barrel along with an age statement isn’t always the magic bullet that consumers hope it will be.

Buy Basil Hayden's 10 Year Bourbon at Frootbat
‍The sample used for this review was provided to us at no cost courtesy its respective company. We thank them for allowing us to review it with no strings attached.
360 video 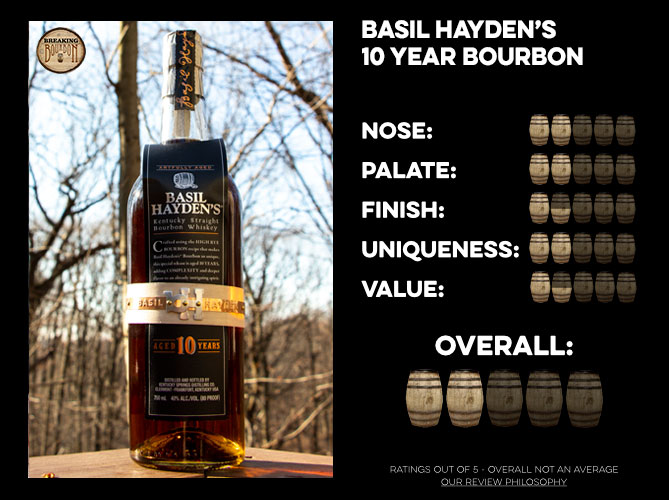 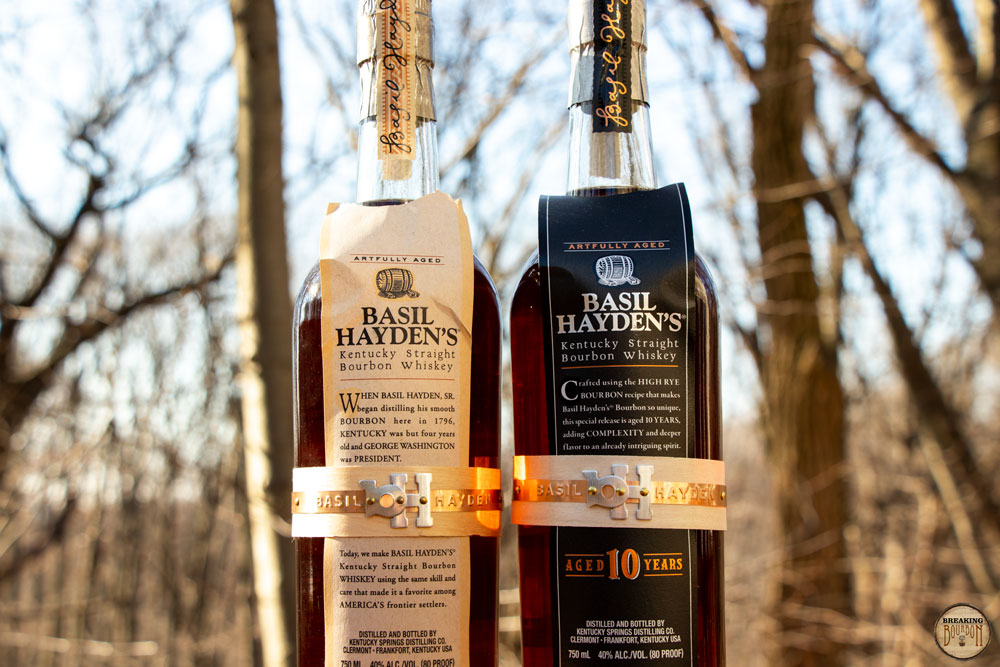 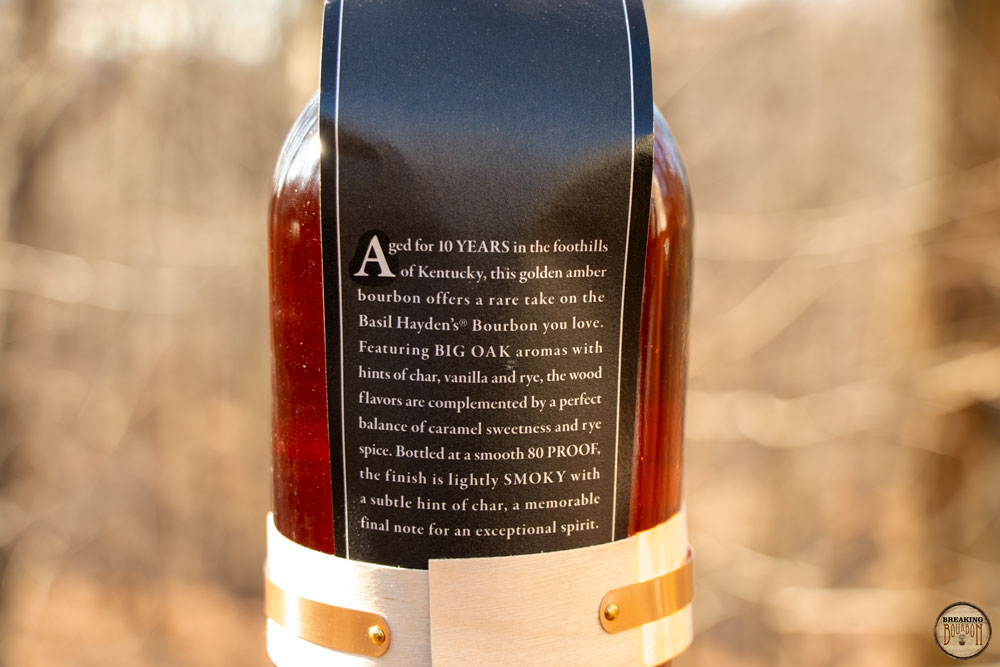