Instantly spellbinding due to its expressive tropical fruit and sweet scents. Layers of peach, apricot, honey, and a touch of red wine hover over a deeper groundwork of molasses and maple infused oak. The aroma’s brightness cannot be ignored as it flows from the glass. Shy, this aroma is not, as it’s potent and intensely expressive, while remaining approachable at all times. It has a lot to say and does it extremely effectively.

A fantastic buttery mouthfeel is immediately noticeable as strong apricot brandy notes roll in. Following is a gentle molasses swell with a red fruit slurry before a tide of mellow aged oak takes hold. A perfect intensity throughout, and despite a rollercoaster of flavors, the palate maintains an expert balance. Even without knowing the finishing casks used to create this whiskey, each of its main flavors are presented cleanly and distinctly. At the same time, the flavors are well integrated; an accomplished feat given the strong and unusual paired flavors involved. Simply excellent.

Layers of sweetness from the palate begin to retrace, allowing for a touch of dryness and leather to pull forward. With it, a trace of rye spice becomes more noticeable, mixing with aged oak and a return of apricot brandy notes. Thoroughly balanced despite the transformation the finish undergoes, it ends perfectly with a pop of heat and a long lingering fusion of apricot and molasses. A delicious way to end the sip.

Much has already been said of the uniqueness of the Seagrass line in our review of the standard NAS bottle. There is still nothing else like it on the market, and that’s likely to stay that way as few other producers would try something as radical without teetering into gimmicky territory. What’s fascinating is how the company was able to iterate on the original release and found a way to improve it in a rather dramatic way.

The standard NAS release features a blend of ryes from Indiana, Tennessee, and Canada. On paper this should make for a more complex blend, yet its assumed youth and more unfocused base blend might have fought against its finishing. Its 16 year old 100% Canada distilled Gray Label counterpart was an improvement in a few ways by offering a more focused pour and an aged oak foundation to rest on. The only problem was some of the brightness of the original was sacrificed to accomplish this.

Therein lies the opening Barrell Craft Spirits saw in which to improve upon. With surgical precision, they took what is great about their two other Segrass releases and combined them into a new exceptional product. With the brightness of the NAS release, the age, depth and focus of the 16 year old Gray Label release, they go a step further to add improved balance, a buttery mouthfeel, and a greater control of heat combined to make a great product even better. What was already an incredibly unique product, is now fine tuned into a truly one-of-a-kind whiskey.

Following the good, better, best business model, Barrell Craft Spirits has now laid the blueprint for other companies to follow, and follow they will. This is a hotly contested model for many bourbon drinkers, with many saying, “Whiskey is already too expensive,” or “No whiskey is worth $500.” While those statements have their validity, that doesn’t mean a company should not have the chance to prove themselves. If the product is bad, it will likely fail. If the market has no appetite for $500 American whiskey, the product will likely fail. If the opposite ends up being true, then a company will likely find success and the hope that a new bar in quality will be reached across the industry.

Barrell Craft Spirits has already released one $500 product in late 2021. Barrell Craft Spirits Gold Label Bourbon was a really good product, just not a really great one, and it struggled to justify its price point. For round two, Barrell Craft Spirits returned with something to prove, and makes a strong case Gold Label Seagrass is worth $500. Even if it was priced at $400, consumers would still be having a similar debate if it’s overpriced. With almost every high-end release topping off around $300, any product that breaks this glass ceiling is going to be infinitely debated. Companies such as WhistlePig, Heaven’s Door, and Michter’s have already broken it years ago, but as more continue to do so, fear sets in that more brands will follow suit.

For now, it's hard to say with so little comparable releases, if any American whiskey is worth $500. With Gold Label Seagrass out-performing current $300 whiskeys, does that help justify its high cost? That said, if you can afford $500, Gold Label Seagrass is a smart place to direct your attention and money to.

Barrell Craft Spirits Gold Label Seagrass goes to show how iteration and challenging yourself to improve can have exceptional results.

I don’t see any place Barrell Craft Spirits can markedly improve upon another Seagrass release. Gold Label Seagrass is peak Barrell Craft Spirits as it proves once again that their expertise is in blending and finishing, but also interestingly, how to take an already great product and improve upon it. Because of the nature of the finishing barrels involved, Seagrass in its three product forms won't necessarily be for everyone. It’s an incredibly unique flavor profile, which can be challenging to those looking for a more traditional whiskey. For fans of Seagrass, this is a must try. If you can’t get past the sticker shock, try and find it at a bar or go in split-skees with friends. Regardless of your personal opinion of Gold Label Seagrass’ price, there’s no overlooking the achievement Barrell Craft Spirits reached with this product.

Buy Barrell Craft Spirits Gold Label Seagrass (2022) at Frootbat
‍The sample used for this review was provided to us at no cost courtesy its respective company. We thank them for allowing us to review it with no strings attached.
360 video 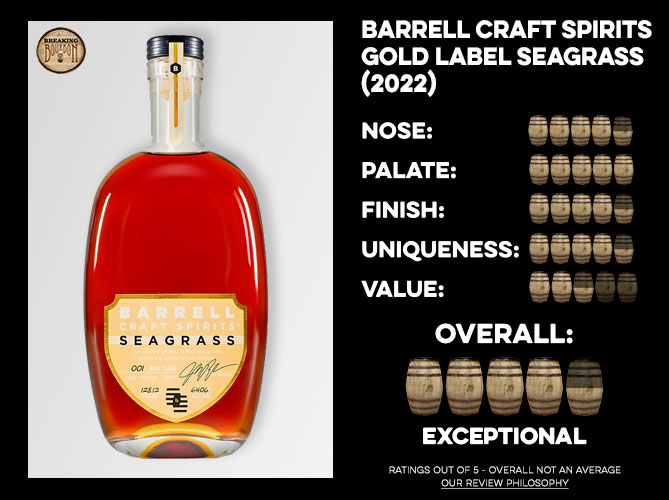 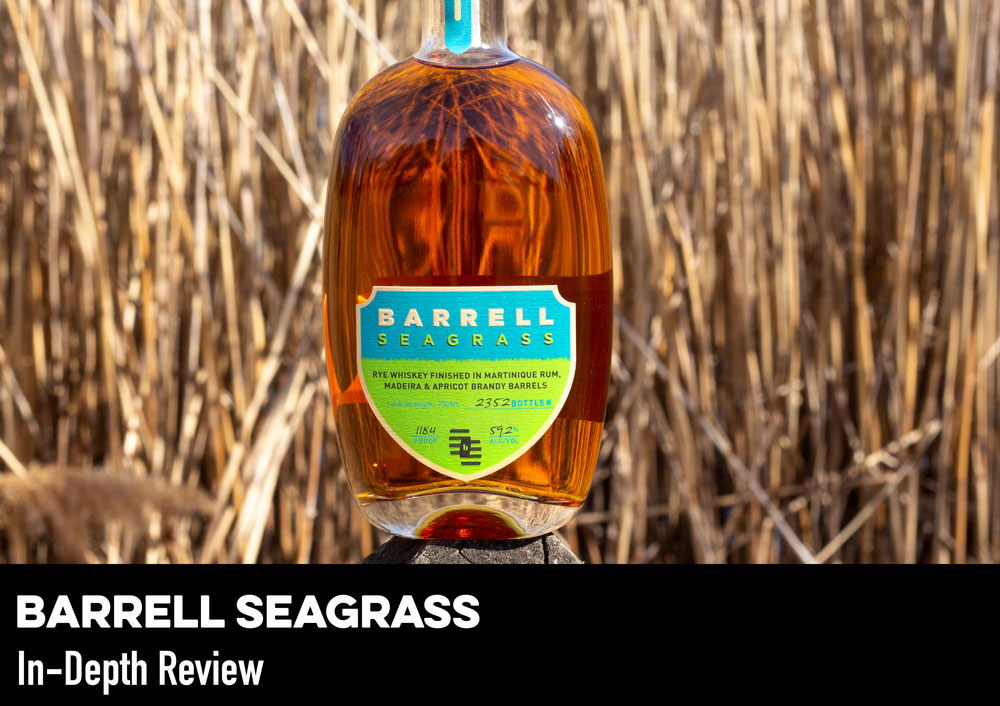 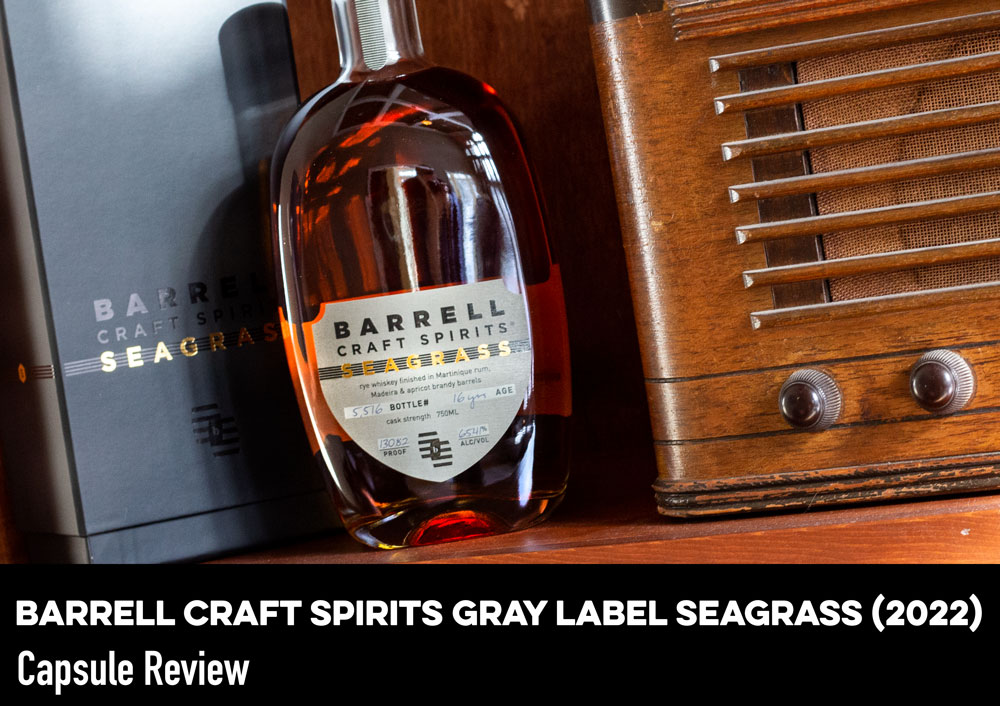 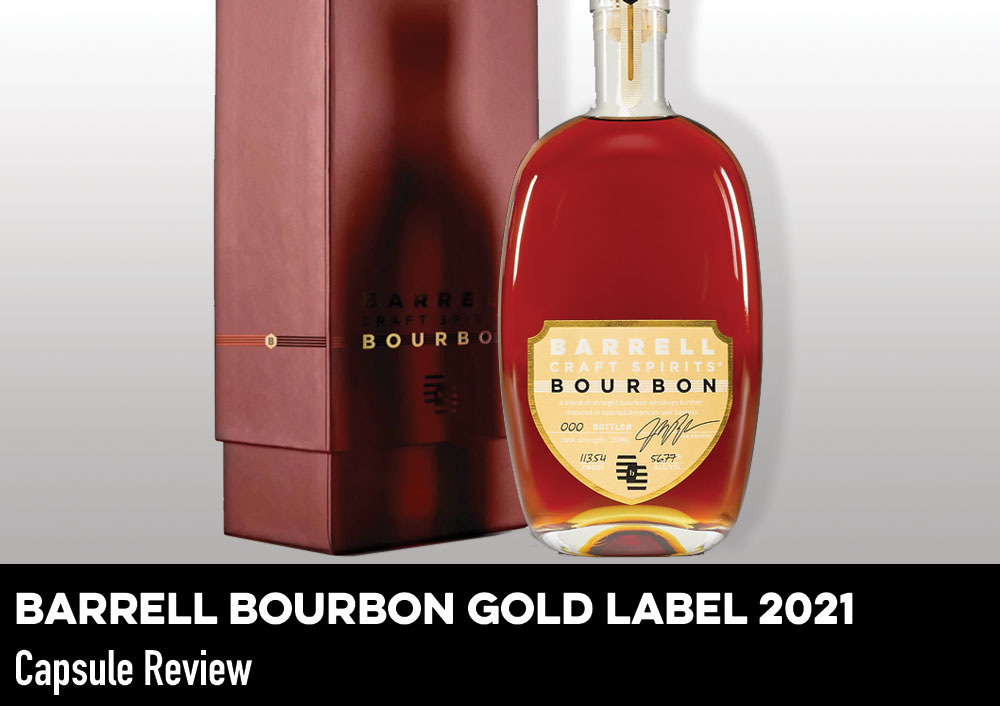