(FRANKFORT, KY –– August 26, 2020) – Only a couple weeks ahead of the Kentucky Derby, American whiskey producer Pinhook has a new vintage racing out of the gate: Bohemian Bourbon Kentucky Straight Bourbon Whiskey (47.5% ABV; $38 SRP). Bohemian Bourbon is Pinhook’s 2020 flagship bourbon, crafted using a proprietary mashbill distilled at Castle & Key distillery in Frankfort, Kentucky. Beginning this month, Bohemian Bourbon will be available for purchase from retailers in 25 states and via Breeze, Pinhook’s new text-to-shop service.

Identified by its orange hand-dipped wax and label, Bohemian Bourbon is created to be an everyday whiskey, blended to withstand dilution when enjoyed in a cocktail or over ice. This vintage has aromas of orange peel, candied pecans, clove, and wet stone, met with a palate of tropical fruit and caramel, leading to a finish of almond and cinnamon. As with all Pinhook flagship expressions, Bohemian Bourbon is meant to be consistently available throughout the year, joining the 2020 flagship rye, Rye’d On, on shelves nationwide.

The 2020 flagship bourbon release follows the April launch of Bohemian Bourbon High Proof, from the same group of Pinhook’s custom-distilled barrels with a mashbill of 75% corn, 15% rye, and 10% malted barley. A fraction of the production size, the limited availability Bohemian Bourbon High Proof was the first bourbon released from the former the Old Taylor distillery – now called Castle & Key – since it was abandoned in 1972.

Pinhook was founded in 2010 with the mission to bring the concept of vintages to bourbon and celebrate the tradition of Kentucky horse racing. Until this year, all the brand’s whiskeys came from barrels sourced from Midwest Grain Products (MGP), which were carefully selected and blended to bring forth their best attributes. Every Pinhook vintage honors a unique, promising young thoroughbred at Bourbon Lane Stables, a racing partnership managed by Pinhook affiliate McMahon & Hill. In another first for the brand, Bohemian Bourbon is the only Pinhook vintage to date to feature a filly rather than a colt.

“Pinhook has no target flavor profile, only an ethos to produce the best whiskey with each and every vintage,” says Sean Josephs, Pinhook Taster and co-founder, who oversees the whiskey distillation, barrel selection, blending, and proofing process. “Distilled with ground-fed, limestone-filtered spring water straight from the source, Bohemian Bourbon joins our portfolio of whiskeys that each represent the best attributes of their respective barrels and have a character as special as the thorough- bred horse on its label.”

You can further explore the brand through the Pinhook AR app, available on the App Store and Google Play. Pinhook is also available to purchase through Breeze, the brand’s new text-to-shop service. By texting the word PINHOOK to 926-848, users are able to shop any Pinhook expression and have it delivered to their door. 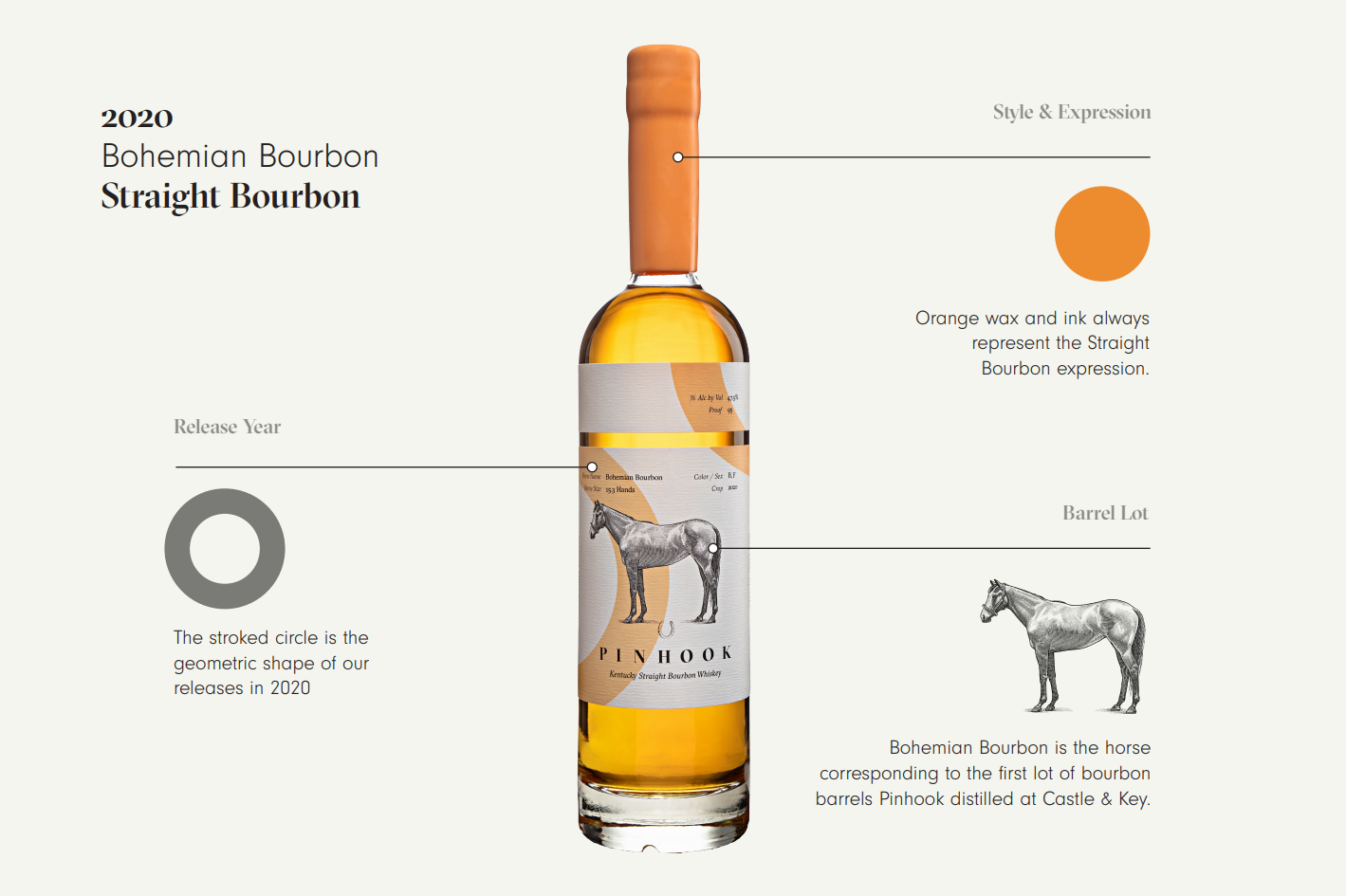 Each year Pinhook releases a new vintage of bourbons and ryes. Every expression is the best representation of our barrels at that moment in time and dedicated to a promising young thoroughbred. Through a combination of careful barrel selection, blending in small batches, and meticulous proofing, each Pinhook vintage has a character as unique as the horse on the label.

In 2010, with nothing but a name, a blending philosophy, and twenty barrels of bourbon purchased from Midwest Grain Products of Indiana (MGPI), Pinhook’s founders launched what has become a breakaway success story in the ultra-competitive field of craft whiskey. Pinhook began releasing small batches in 2014, and when Castle & Key embarked on its celebrated restoration of the abandoned Colonel E.H. Taylor distillery in Frankfort, Kentucky, Pinhook came on board. All Pinhook barrels are now aged, blended, and bottled at Castle & Key, and since 2017 Pinhook has been distilling proprietary mashbills of bourbon and rye there as well.

Pinhook’s founders set out to make an excellent yet accessible whiskey. To that end, the flagship bourbon and rye are meant to retail at less than $40 and are priced wholesale to be excellent candidates for an Old Fashioned, Manhattan, or Julep as well as straight pours. Pinhook won a Gold Medal at the San Francisco World Spirits Competition in 2019 for its high proof bourbon and a Double Gold in 2020 for its straight rye.