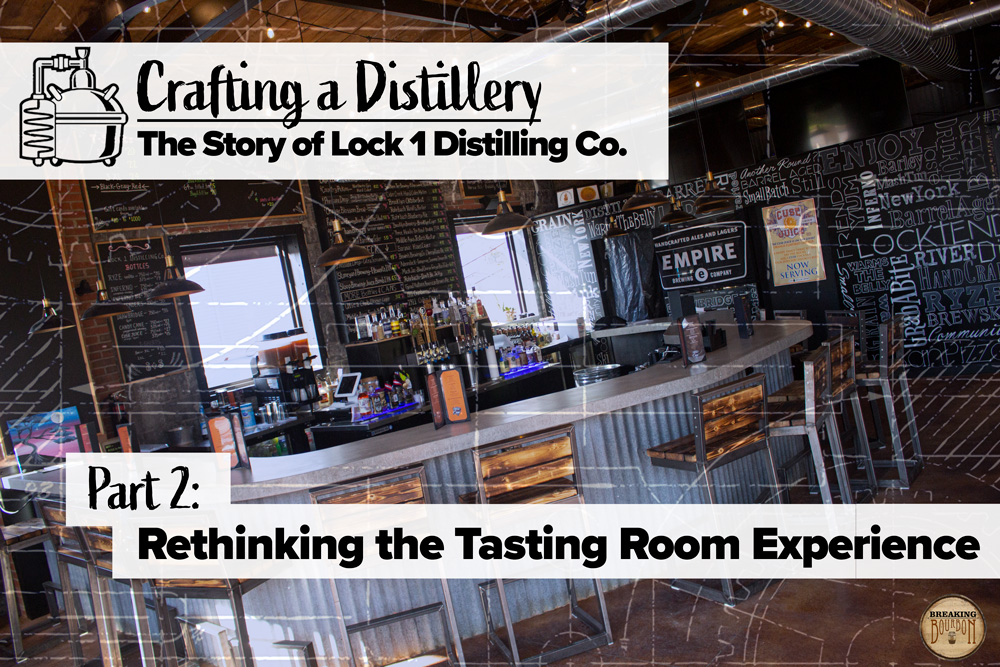 You can find Part 1 of our series here‍

From the onset, Lock 1 Distilling Co. had a road map they hoped to follow. Getting the distillery off the ground took a huge personal toll on the owners, but they have maintained their course during the development and opening of their operation. With the distillery fully functioning and their non-whiskey products on store shelves, the team looked towards their next goal: renovate the front half of their building for a tasting room. This was a big next step for the Lock 1 team - one they thought would take five years - yet miraculously, found themselves launching their tasting room four years ahead of schedule.

The initial plan was to sell enough of their products over the course of five years to cover the costs of renovating their 100 year old building. Sales of their vodka, gin, and flavored spirits have remained steady during their first year in business, and their five year timeline seemed attainable, yet far away.

In 2017, New York State put forth an initiative to encourage the revitalization of commercial and residential properties throughout the state. Looking at their timeline, the Lock 1 team thought if they were lucky enough to be awarded the grant, it would not only kick-start their tasting room plans, but their business as a whole. With little to lose and so much to gain, they applied for the grant, and to their surprise, won approval.

Lock 1 was awarded $313,000 for building renovations, which they used entirely for their tasting room. The state didn't simply cut Lock 1 a check for the full amount. Instead, the state required Lock 1 to front the entire cost of the renovations before they would be reimbursed. Being a 90/10 grant, Lock 1 was also responsible for 10% of the $313,000 plus any overages - which they found themselves encountering. As co-founder and master distiller Brenden Backus puts it, “We hit the grant number way sooner than we wanted to.” 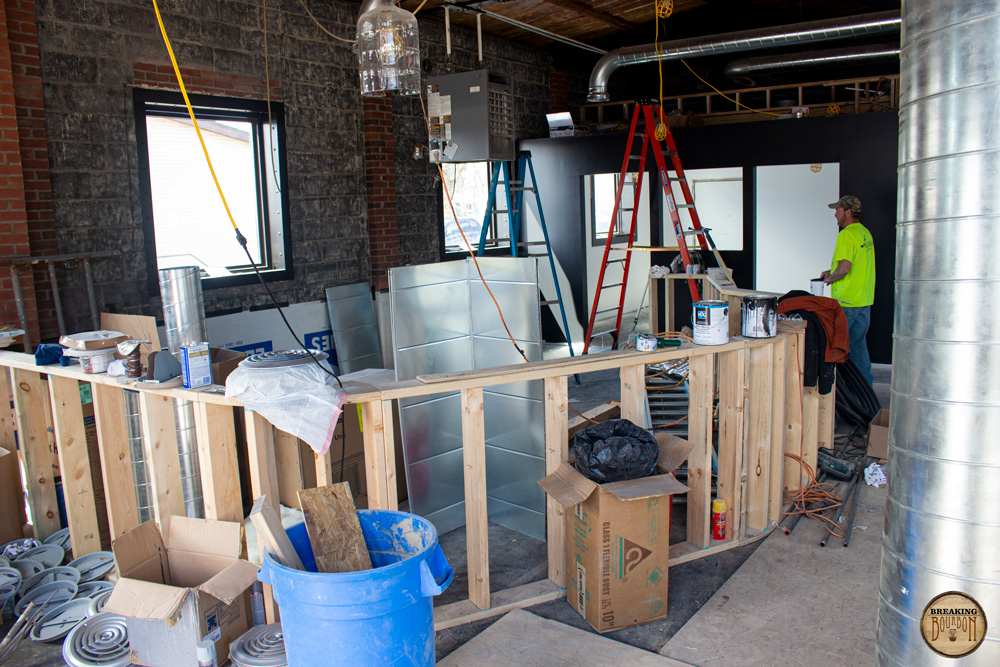 The team at Lock 1 wasn’t interested in creating a space where visitors could come and simply sample their products, take a tour, buy a bottle, and leave. They envisioned a meeting place that was more than a retail space for their own products, but a place where people were welcomed to stay and relax. It would be a tasting room that not only served their own products, but also other distilleries’ and breweries' products.

Part of New York’s revitalization plans included drastically changing the rules of what distilleries and breweries are allowed to sell in their establishments. Now tasting rooms can feature not only their company’s own products, but other companies’ spirits, beer, cider, and even offer cocktails as well. The only stipulation is the products have to originate from New York State based companies. 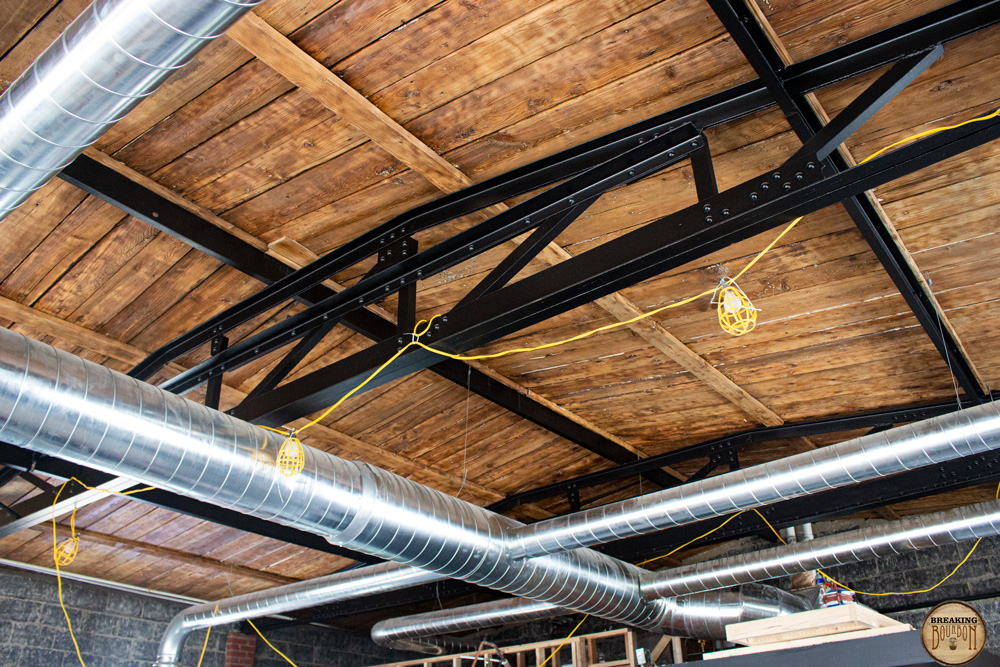 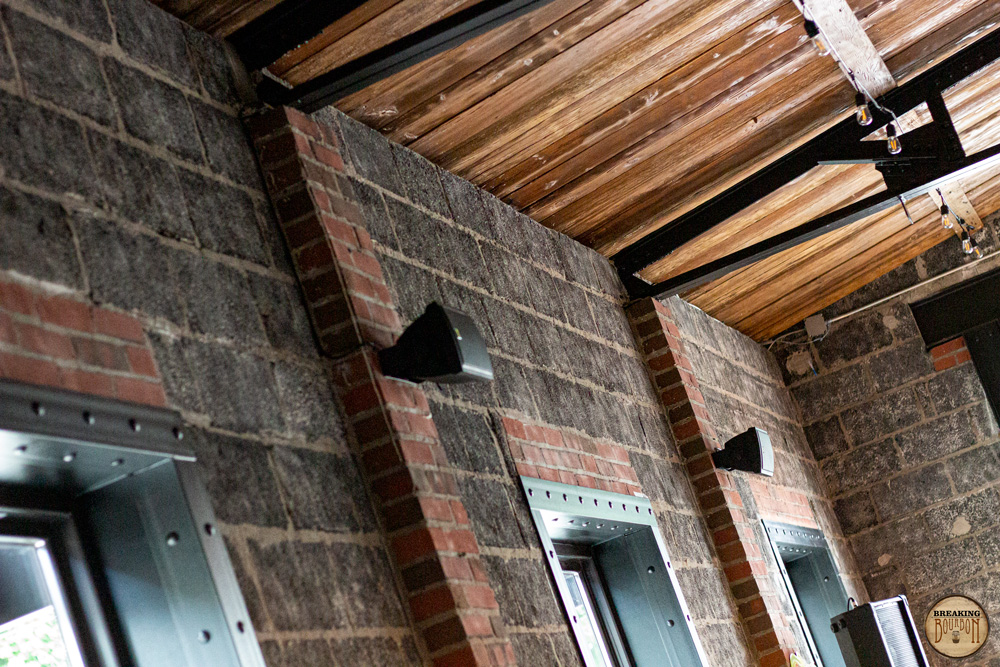 As construction commenced, design plans soon changed as they removed their building’s old drywall and ceiling. They noticed the newly exposed block and brick from the 1900’s structure was quite striking. Deciding to go with the new look, the layout, design, and lighting all had to change. Construction took a little bit longer than originally expected, but the team still made their early summer grand opening.

Since then, the tasting room has had a drastic impact on the distillery’s business as it gives Lock 1 a direct storefront they never had up until this point, and further helped shape their identity. Up until now, they were just another product on crowded store shelves. With the help of a customer-focused and experienced-based tasting room, they had an identity that customers could grab hold of and apply when seeing Lock 1's products at their local liquor store. 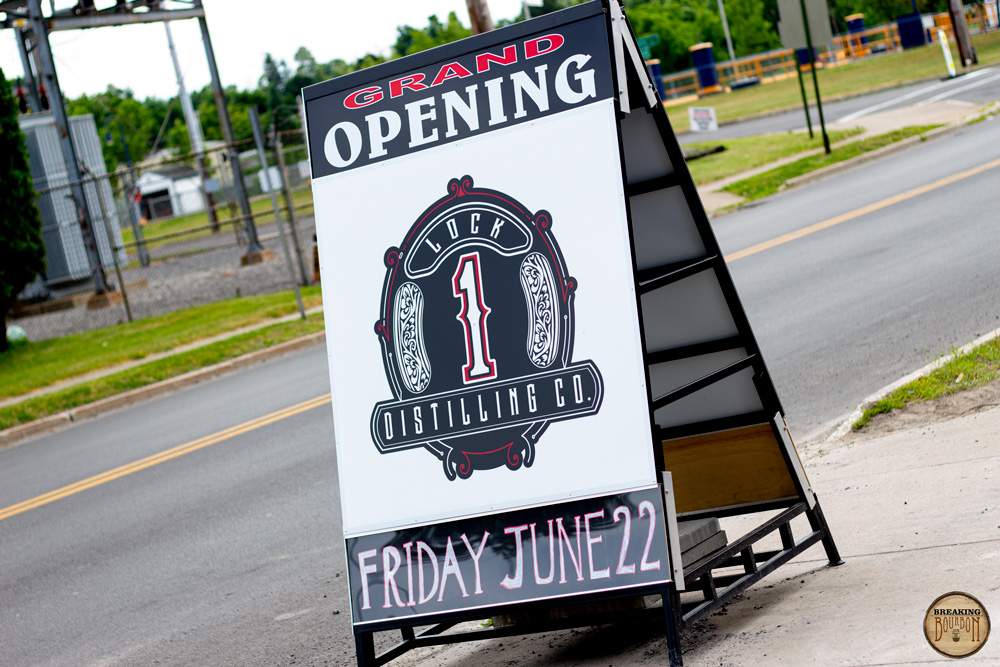 “Our main outlet for sales was retailers. We didn’t have a great building to look at. We didn’t advertise. We weren’t trying to bring people in because we didn’t have anything to look at yet,” Backus said. “We sold maybe 10 bottles a week out of the distillery before the tasting room was finished. Now we may sell 20-30 bottles a day. As a whole package, it’s working very well.”

As odd as it may sound for a distillery to offer other distillery’s products in their own place of business, Backus sees it as helping the bigger overall craft movement. Often fighting against limited budgets, lack of advertising, and craving ever more exposure, this banding together might help draw more attention to craft distilling and brewing. 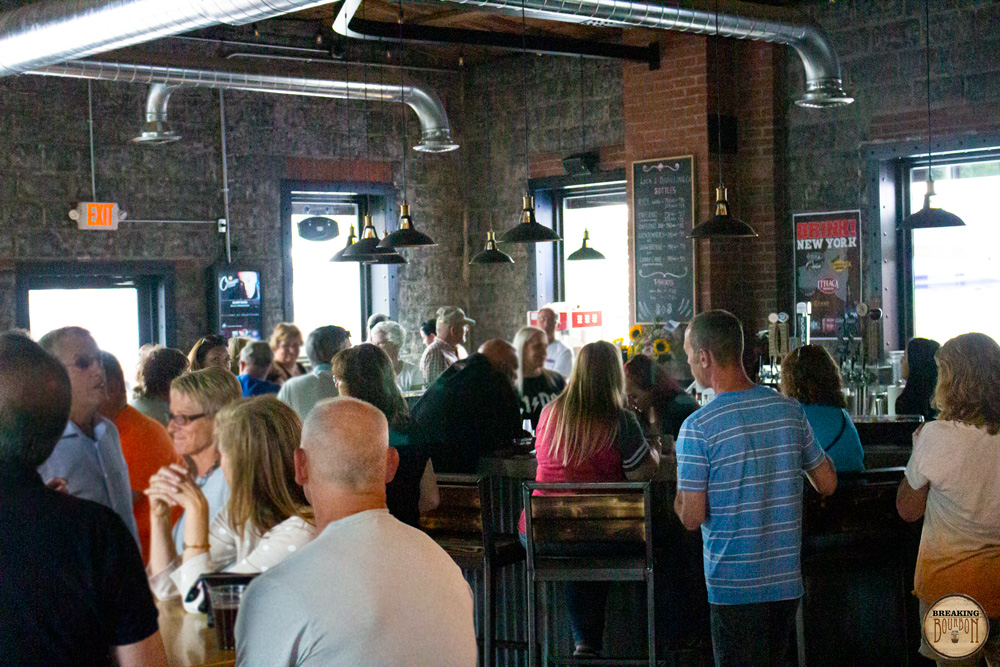 Backus said he feels like craft distilling might have gotten a bad rap during the early days of the bourbon boom this decade. Be it inexperienced distillers or inferior products rushed to market, some consumers have had bad experiences with craft products that left a lasting impression. The new wave of craft distillers are often bringing with them more experience, learning from past mistakes, and exploring a wealth of new ideas. One place this is especially true is the distillery experience.

“If people want a different experience they can come here. If people want to drink Coors Light, Bud Light, or Jameson there are plenty of places they can go do that,” Backus said. “Here they can come in and sample our product, have it in a mixed drink. See how it’s made. It’s an experience you can’t have at any other bar, restaurant, or liquor store.” 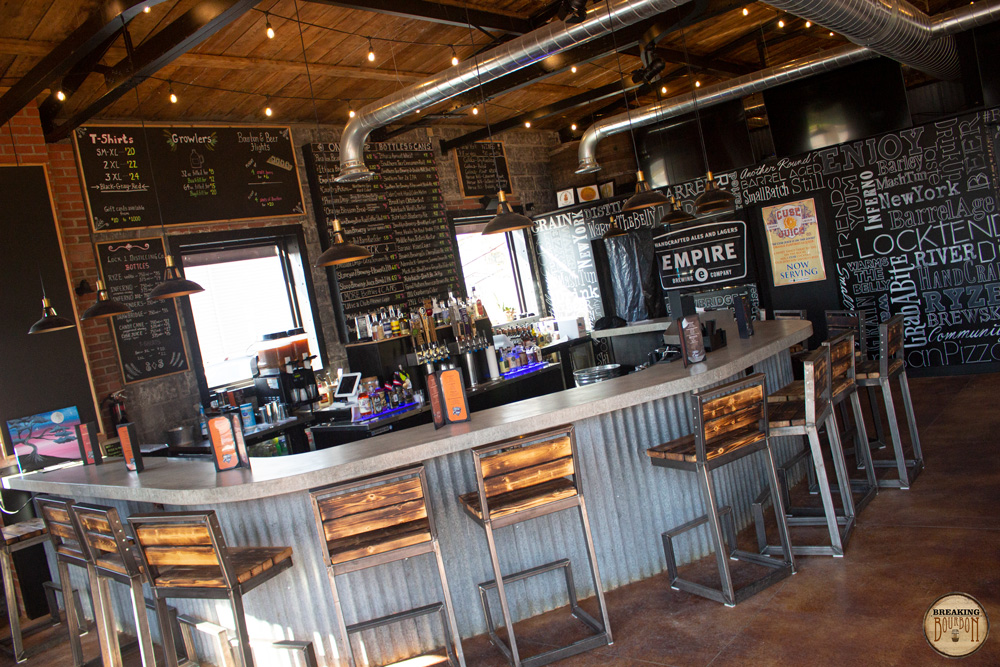 Since the grand opening, the team is still making improvements. A kitchen has been added and an outdoor patio is in the works. A recent visit on a weekend showed the distillery’s tasting room is drawing many different age groups from around the community, and interestingly, at all times of the day. No longer is a distillery visit relegated to a short afternoon visit. They’ve transitioned into a destination and more and more distilleries and breweries are following this trend.

“It’s about the experience now. And the numbers support it,” Backus said. “We’re riding the wave right now. Who knows how big of a wave it will be.”

Crafting a Distillery: The Lock 1 Distilling Story is a series that chronicles Lock 1 as they grow as a company, develop their first bourbon, and the challenges they face along the way. The goal is not to glorify the process but to reveal what it really takes to create a distillery from scratch. Lock 1 has agreed to continually share their story with us, through the good times and potentially bad times, so that spirit lovers will have a better understanding of the trials and tribulations real people go through to follow their dream.

Part 1 of the series focused on the creation of the distillery and the personal cost of such an operation. Coming soon: Part 3 in the series will focus on Lock 1’s development of their bourbon. ‍ 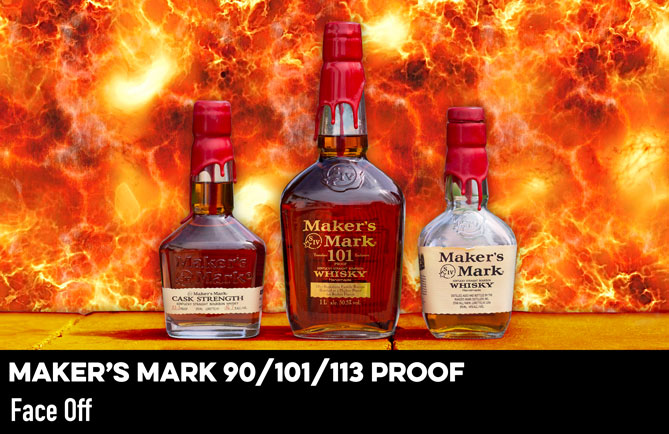 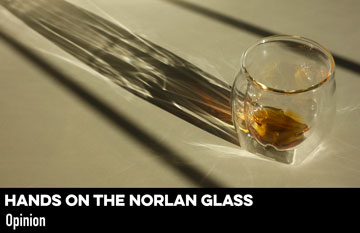