Since I graduated college, my buddies and I have gathered at least once a year to reconnect, drink, and well, act like complete idiots. About 4 years ago we had what may be the last annual retreat at someone’s personal home. Our wives and girlfriends made it abundantly clear that the group was no longer welcome around them or the children. We didn’t argue.

The following year us guys decided to rent a cabin in Bethel, New York. We liked the cabin so much we’ve been renting it each year since for our annual “Mancation.”

So that brings us to this year’s Mancation.

Despite the typical inability of any one of us to legally  operate a motor vehicle for the duration of the trip, I had discovered the nearby Catskill Distilling Company and really wanted to carve out some time for a tour. I did some research ahead of time but found very little about them besides what was on their website and a few articles online. Living just 3 hours away in Syracuse New York, I was surprised that I’d never seen their bottles on the shelves of my frequented liquor stores. (I later learn they’ve made their way well into the liquor stores of New York as well as other states in the northeast, just not the ones I tend to shop at the most.) Despite having never tried any of their spirits I was excited to visit. 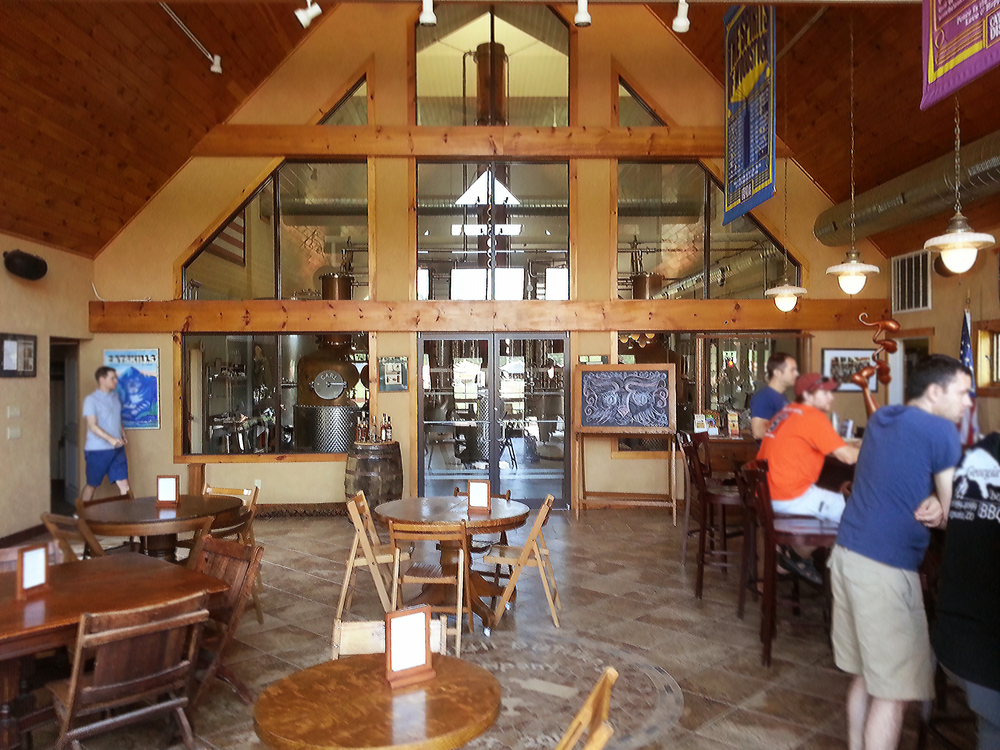 So I call them about a week in advance to confirm tour times. Turns out they’re open for tours from about 8:30 am until 5 pm and I’m told to come by anytime, even though the website says 2 pm to 6 pm. Although a little confusing, this is great news because we may be sober long enough to do an early trip before our heavy drinking naturally ensues. I’m pumped.

We arrive at the distillery on a Friday before noon. This place is gorgeous. It’s pretty much a brand new build-out from the ground up. A jointly-owned bar/restaurant called the Dancing Cat Saloon is on the left as you pull in and the distillery building is set back a little ways off to the right. A small one story rack-house sits behind the distillery and to the left, with another larger rack-house that’s currently under construction right next to that. On the main building a huge wall of windows with a peak in the center faces the road and there’s a large deck in front. The building is surrounded by a good deal of lawn space with picnic tables and a huge fire pit that’s set up for a bonfire already. 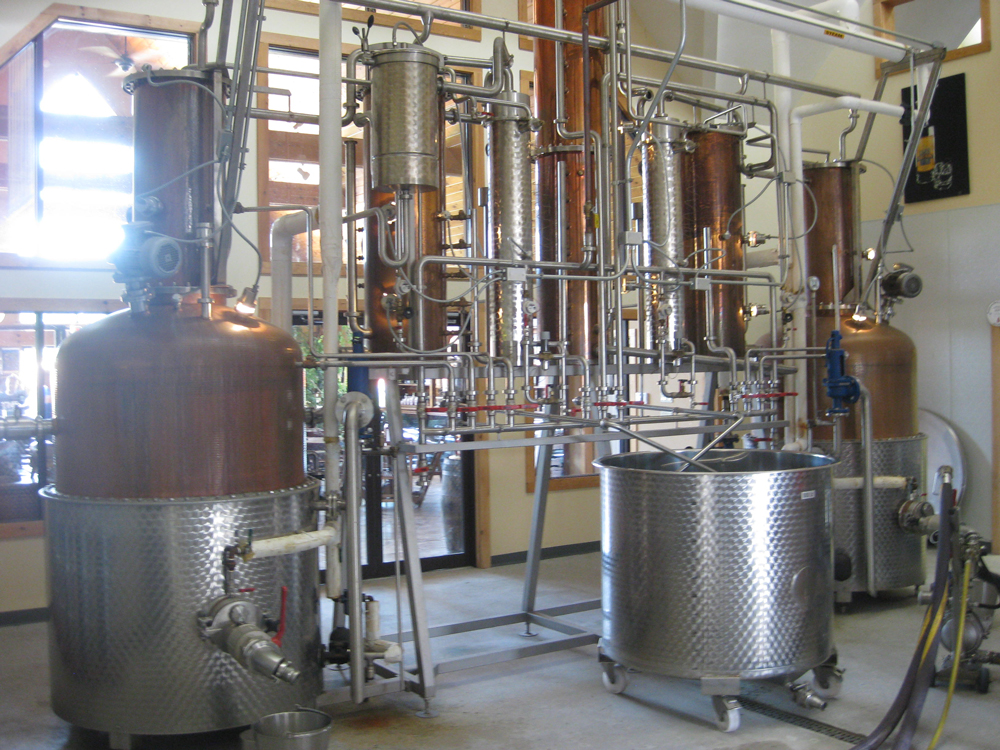 We enter through the side of the building into their spacious tasting room, which seems large enough for a gathering for 150 people or more. It’s decked out with nice finishes and ornate woodwork around the bar, which is unexpected and refreshing for a new build-out. At the back of the tasting room another large wall of windows gives way to a picture-perfect view of the distilling equipment; a $300,000 CARL system that we later learn was imported from Germany. Windows up near the ceiling throughout the building and open doors from behind and on the sides of the distilling rooms allow for a good deal of natural light to really showcase this beautiful copper and steel equipment.

About 5 minutes goes by since we entered the building. We have yet to see an actual human being even though there are about 20 cars in the parking lot. I’m thinking these people must be over at the Dancing Cat Saloon. Or maybe they’re playing hide and seek; everyone’s hiding and it’s our turn to seek, we just haven’t realized it yet. But I really don’t care because I’m still scoping out the tasting room. Finally, a bartender from the Dancing Cat Saloon comes in the front, stocks up on some bottles, and then rushes away. On his way out he calls back into the distillery rooms to let someone know we’re there. 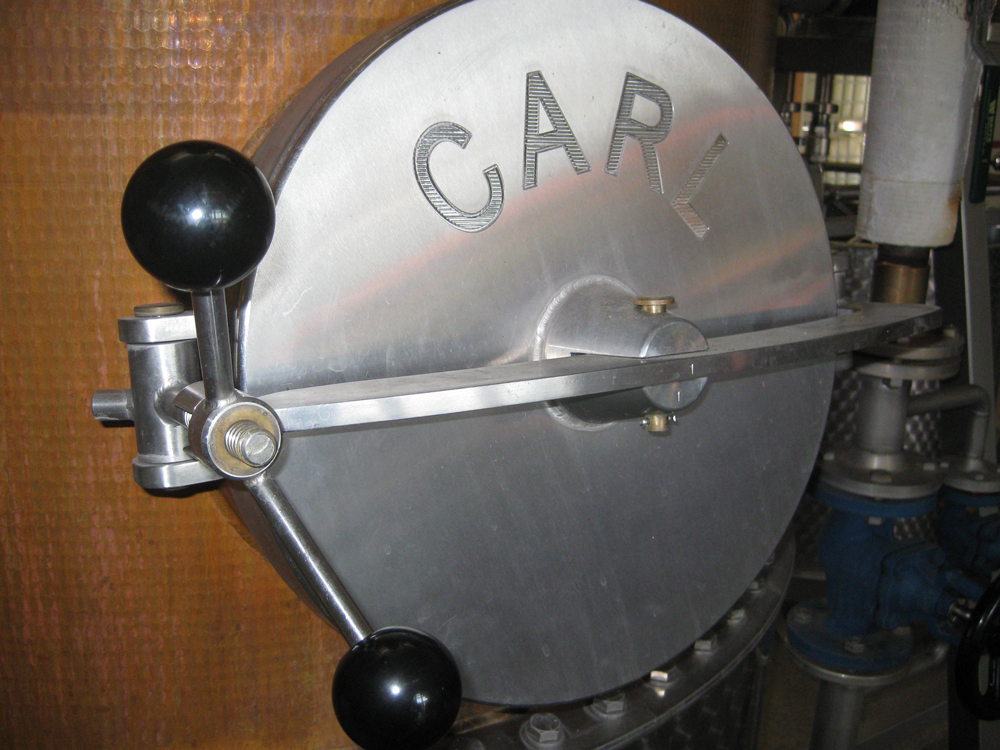 A tour is already underway, but we’re greeted pleasantly and invited back to join that group. We catch a few last minutes of that tour but it’s a little confusing to jump in at the end so I take the opportunity to snap some photos of the equipment instead. Once the initial group leaves, our tour guide starts over. His name is Calvin. It turns out Calvin isn’t just a guide spouting from a memorized script, but the Production Manager who appears to run the day-to-day distilling almost entirely on his own. Aside from another gentleman meandering around who Calvin says is in training, I get the impression that he personally handles the lion’s share of the distillation work. More importantly, it’s obvious Calvin is proud and excited about the work he does here.

Calvin says the company was started over 4 years ago with the help of a grant due to the 2008 New York State Farm Distillery bill. There was a $295,000 grant given to Sullivan County and subsequently loaned to Dr. Monte Sachs to purchase the distillation equipment. The remainder of funds came from other sources including personal owner equity, financing, hard work, and passion. It is at this point that I immediately start to re-think my career path. [Per a later conversation with Dr. Sachs, had it not been for the grant to Sullivan County this dream may have never come to fruition.] 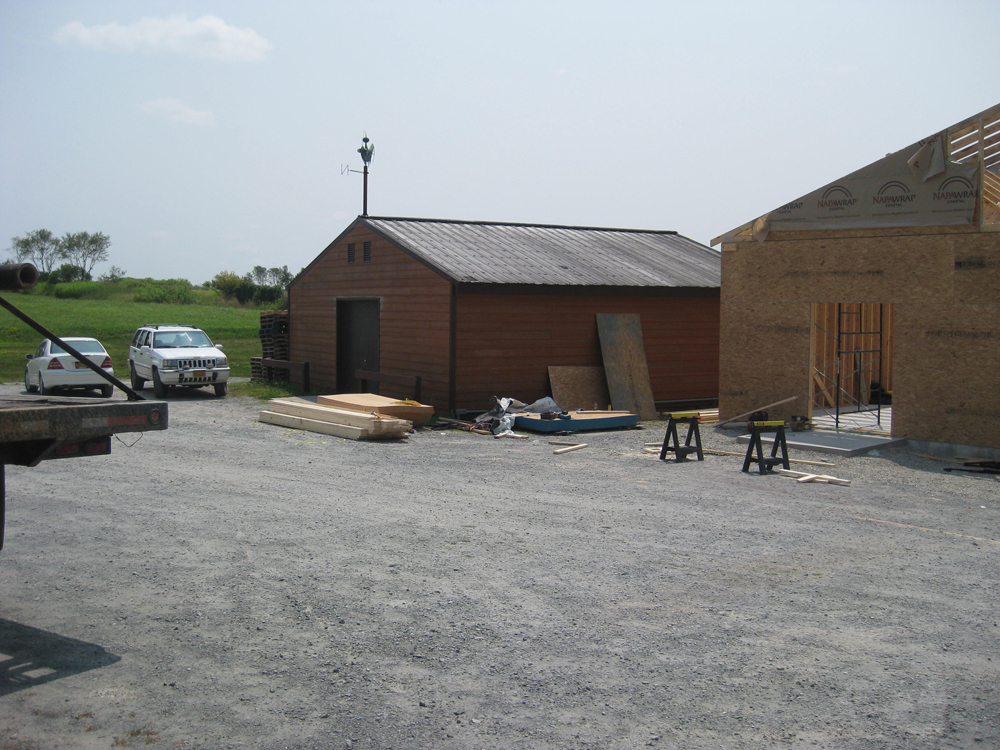 Calvin explains that New York state grains are used to distill the spirits, and then the leftover mash is returned to local farmers to be used as feed. He claims that you can taste the whiskey in the meat as a result, which I’m pretty skeptical about even though the idea of naturally-infused-bourbon-ribs makes my mouth water. If you google this topic you’ll get quite a few results… I’ll let you be the judge.

The tour continues. We peek out at the two rack-houses, one working and the other under construction, but don’t venture out to go in them. Calvin shows us the grains, the sour mash, and details the distillation process. He says that the aged whiskeys are all a little over 2 years old and that the whole process of grain to barrel takes approximately one month on average.

The tour lasts a little over 20 minutes, although it seems Calvin would have spent even longer if we had wanted to. He brings us back out into the tasting room, cashes out a few customers who had come in just to purchase a few bottles of One and Only Buckwheat and some maple syrup, and then starts the tasting. 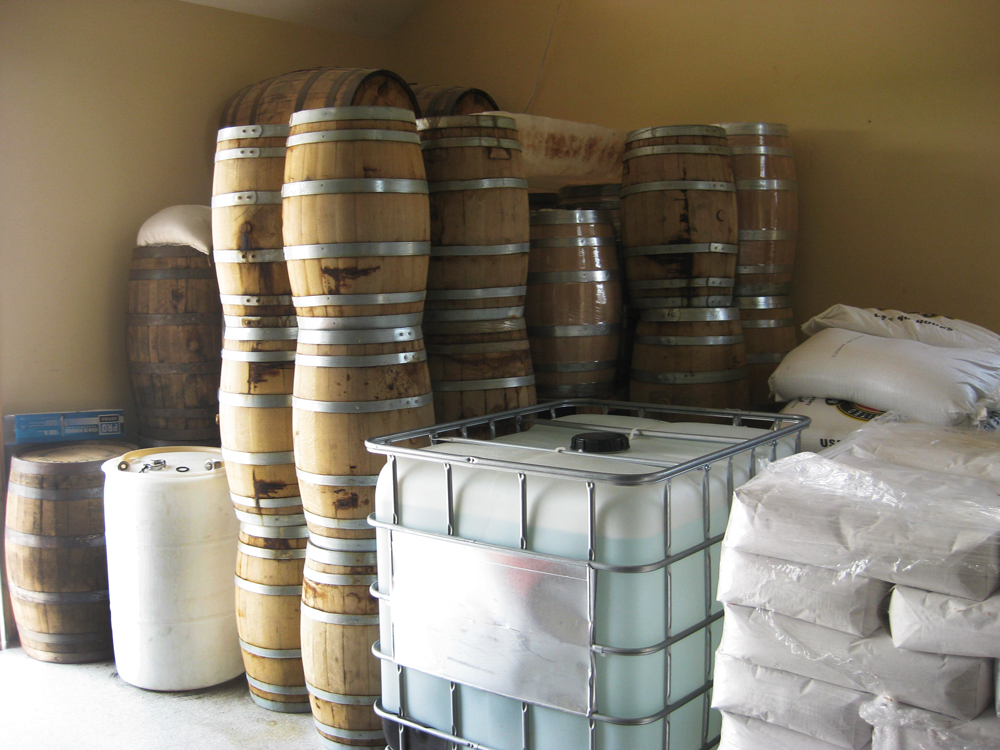 The tasting is somewhat informal, just the way I like it. Calvin bounces around from spirit to spirit as the conversation flows, allowing my group of friends to navigate the discussion and decide what we want to try next. We sample everything they make except for the grappa. I note the 375 ml bottles are actually quite nice looking, but ask why they don’t sell the whiskies in 750 ml bottles. Calvin explains that because of the price point it’s easier to sell a 375 ml for $30-$35 than a 750 ml for $60-$70. This makes sense. He also says they’re in the process of bringing a 750 ml Most Righteous Bourbon to market because it’s their #1 seller. There’s no talk of price but my guess is it’ll be around the $50 mark (the 375 ml currently sells for $30).

The whole tasting lasts about 20 minutes and, while I can sense a few of my friends losing interest, others seem to be gaining interest as we progress. This includes guys who are otherwise not really interested in whiskey to begin with, a testament to the quality of the tour and tasting experience. Between us we buy 6 bottles; 3 The One and Only Buckwheat, 1 Most Righteous Bourbon, and 2 Curious Gin. In case you’re wondering.

I leave feeling pleasantly surprised about the whole experience and would highly recommend visiting if you’re near Bethel New York and have an hour to spare. From their website it appears there’s a designated tour guide, which may be by appointment only… I’m not really sure. I’ve also read stories of Master Distiller and owner Monte Sachs giving tours, which makes me wonder how those tours may differ from my own. Regardless, my experience was top notch and I want to give a shout out to Calvin for giving us a great tour.

All Calvin’s talk about the whiskey-infused meat must have gotten into our heads, because on the way back to the cabin we stop down the road for barbeque, then make ribs for dinner. The barbeque place, by the way, is worth a visit if you’re nearby the distillery and want to eat outside. The food is legit, although it’s served from a mobile trailer unit with a smoker out the back that only accepts cash. Another good business idea? Now I’m torn between opening a distillery or a cash-only roadside barbecue joint. What the heck, why not both? My friends and I later discuss this at length, but official business plans have yet to materialize. 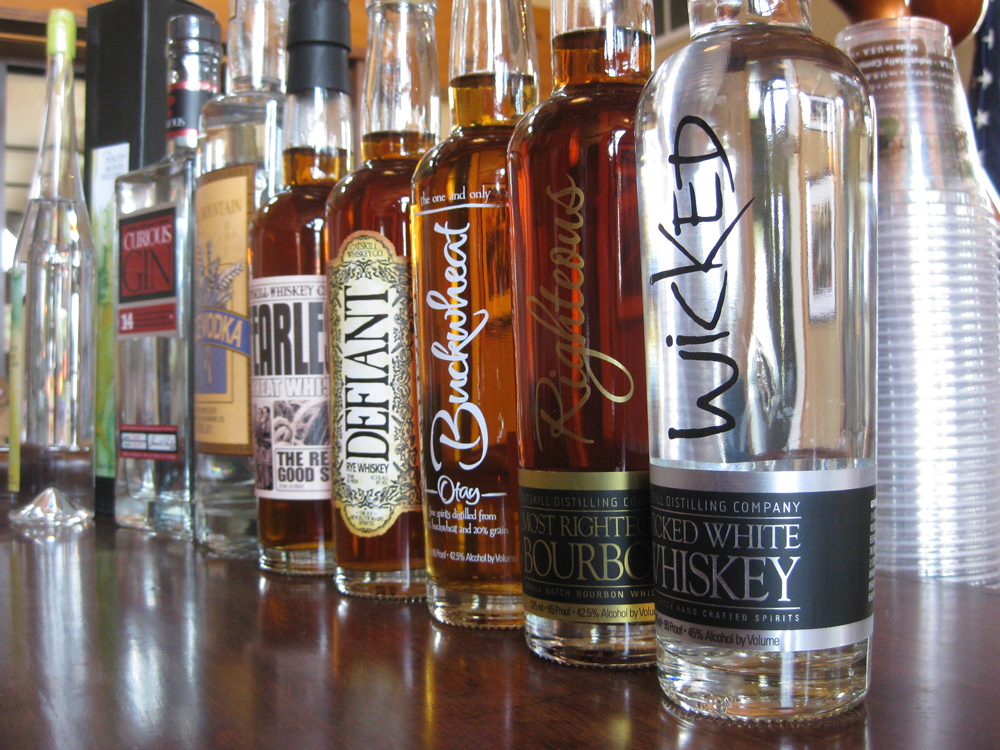 I need to preface this by saying I had a very small taste and very brief experience with each of these spirits as of this writing. Hopefully I’ll have an opportunity to do full reviews of each whiskey at some point. Until then, here’s my initial take:

‍Peace Vodka: Sweet and light, picked up some vanilla and anise. Surprisingly good. I don’t ever sip vodka but if I had to this would be my first choice.

‍Curious Gin: Light and citrusy. Not something I would normally sip though.

‍Wicked White Whiskey: Not the worst white whiskey I’ve ever had. On par with some of the High West offerings I’ve briefly sampled, which were good (for white whiskey).

‍Defiant Rye: Not very spicy. Sweet and easy to sip. Nothing unique jumped out at me.

‍Fearless Wheat: My initial take is it tastes similar to the rye, but I didn’t drink enough to really compare the two.

‍Most Righteous Bourbon: A high amount of corn makes it fairly sweet and easy to sip. A “Crowd-pleaser” so to speak. I can see why this is a #1 seller. Even after my brief sip I’d be comfortable recommending this to anyone who appreciates a sweet easy-sipper and isn’t afraid to spend a little extra money on a craft spirit.

‍One and Only Buckwheat: Interesting. It has an earthy quality, but it’s balanced by the sweet fruity flavors. Kind of scotch-like, but not quite. I’m not a big fan of scotch per se, but this combination of flavors works. There are very few whiskeys made with buckwheat, which makes me wonder why that’s the case considering the quality of this one.