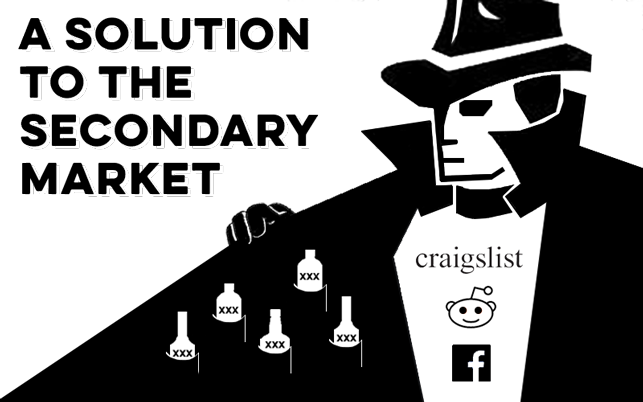 ‍If you didn’t watch it happen first hand, you’ve probably already read about Facebook shutting down buying, selling, and trading groups dealing in items such as guns, cigars, and more specifically bourbon. Fast forward a few days after the incident and at least a few of the groups were back up along with apologies from Facebook for removing them in the first place, an accident apparently.

While the illicit secondary fills a natural gap in the market for bourbon and is no more than willing buyers connecting with willing sellers, it does open the door to a number of problems.

But that’s not what this article is about.

The simple fact is, consumers want the ability to exchange goods with one another; bourbon, or any alcohol for that matter, is no different. While the secondary market may include only a minimal number of active participants, it meets a very real demand in the marketplace and seems to be growing. Moreover, if I want to sell a bottle of my own bourbon to another person, why shouldn’t I be able to?

I’m not going to answer that question, but I think it’s fair to say that no one will ever be able to completely purge the illegal secondary market, not with brute force anyway. Where laws exist that prevent willing parties from transacting, they will find a way to make it happen. Just look at marijuana’s history in the U.S.

Rather than trying to squash the sellers with brute force, wouldn’t it make more sense to modify laws to accommodate consumers’ demands when it comes to buying and selling alcohol?

One solution I’ve thought about, in a similar sense, was laid out much more eloquently by Brian Haara on his blog, Sipp’n Corn. The essence of the solution would be an option for end consumers to sell rare bottles to a licensed third party clearinghouse who would then sell or trade them on the open market, removing a number of the problems now plaguing the secondary market. The potential downside: one more “tier” adding cost, complexity, and a whole new set of problems.

I’d like to think that some form of his concept could work, and with the right controls in place I would be all for it. Maybe if consumers’ identities were verified and the option to sell was limited to natural persons only, coupled with a cap on the number of sales allowed per person per year. Would controls such as these eliminate the potential for this to become a fourth tier? Or would this open up the door for more “flippers” than we see today, giving random, otherwise uninterested opportunists a now legal means to make quick cash making it even more difficult to find rare bottles at good prices?

Building off Sipp’n Corn’s idea, I propose the concept of a regulated marketplace where consumers could buy, sell, or trade bottles of alcohol with one another, retailers could fulfill orders in limited instances where the need presented itself, and all of this would be handled by a legally authorized third party. This third party would be responsible for handling the transactions, collecting transaction and per bottle based fees (no sharing in the value of the bottles, and this is important), ensuring the parties to the transactions are of age, and verifying authenticity of consumer supplied bottles. Consumer supplied bottles would pass through the third party’s facility and they would hold them in escrow until everything cleared, finally remitting the bottles to the end consumers in the transaction. Retailer supplied bottles would be shipped directly to consumers in order to minimize cost.

This would require a credit based system where the value of bottles-in and dollars-in effectively become trade-value or cash-value credits held in trust by the third party handling these transactions. Each party would have a very limited and defined role to keep things in check.

‍Consumers would be authorized to fund purchases with cash or bottle trades, but would only be allowed to take out bottles from the system, never cash (by cash, I mean monetary payment of any kind). Consumers would receive trade-value credits for bottles (to be used immediately when making trades) or cash-value credits for cash put into the system (which could be used immediately or be held in trust for future transactions), or some combination thereof. They would use trade-value and cash-value credits to acquire bottles from other consumers, and cash-value credits to acquire bottles directly from authorized retailers. So while consumers could “sell” bottles, they could only realize profit in the form of other bottles.

‍Retailers would be authorized to sell bottles to consumers (shipping directly to consumers to avoid additional costs or even holding for local pickup), and would be authorized to take cash-value credit payments in, of which an actual cash payment would be distributed from the third party to the retailer. Retailers would not be authorized to trade with or purchase bottles from consumers or other retailers, leaving the three tier system intact. The main purpose of the retailers’ involvement would be to provide a means for consumers to sell more rare bottles, such as Pappy Van Winkle, and subsequently use their cash-value credits to purchase an assortment of common bottles from a retailer that would not be cost effective to be offered up for trade by another consumer… in other words, the concept would not transfer the role of existing retailers to consumers when it comes to supplying readily available bottles. 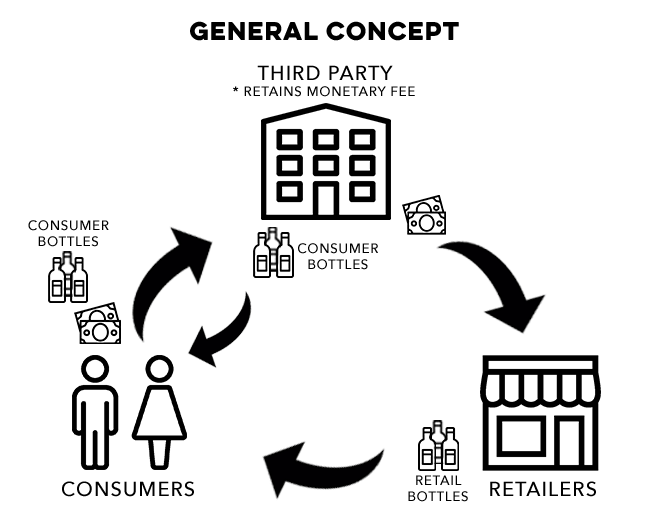 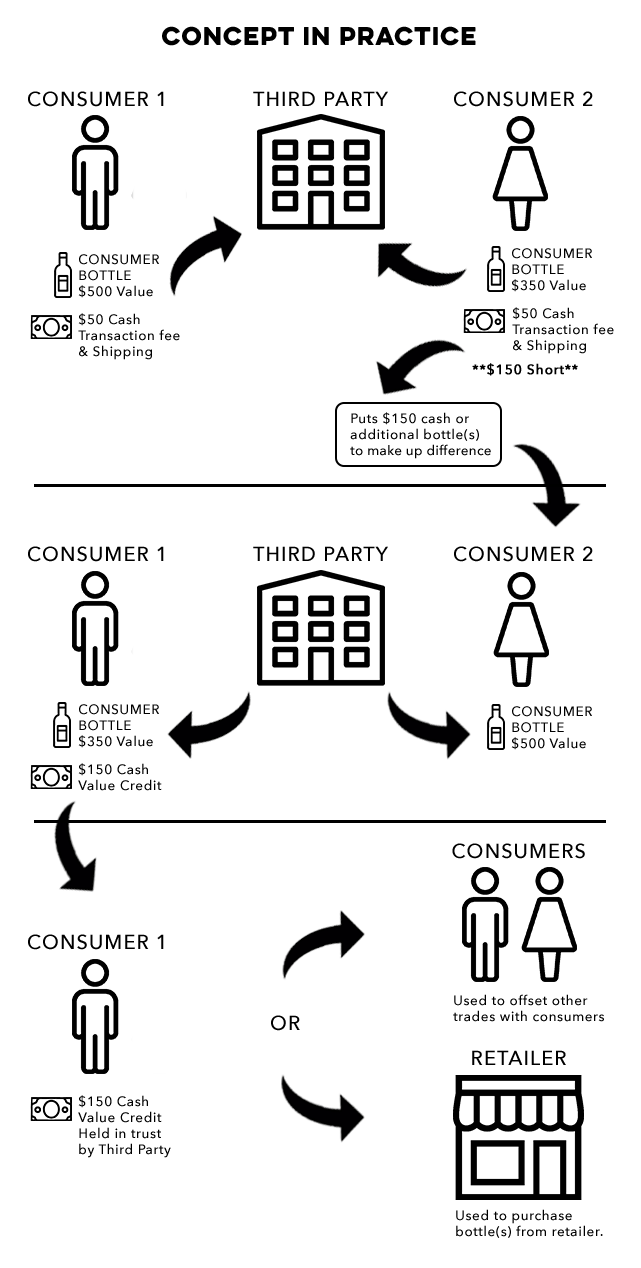 By removing the ability of average consumers to make profit in a monetary sense, this concept could meet the needs of many of the real “buyers” in the secondary while eliminating those seeking to merely flip bottles for a quick monetary profit. Rather than detracting from retailers’ businesses, this might even serve to protect them.

As for fakes, the possibility will never be completely eliminated, but by removing the opportunity for consumers to realize monetary profit along with an evolving and concerted effort to identify fakes, we can only hope the idea of a fake becomes a tale of the past.

Since the third party handling the transaction would be limited to compensation based on trade volume and not bottle values, their incentive would be to minimize costs while maximizing efficiency. They would work with retailers as opposed to against them.

Keep in mind this is a concept only. Laws would have to change in order to create this opportunity and shipping of spirits would have to be allowed [read our related article: The Confusing State of Shipping Bourbon].

And yes, maybe you could call this a fourth tier… but maybe we need something like this to work in harmony with the already established system. There is a real and growing demand here, and it’s going to be satisfied one way or another. Why not work towards a system that protects consumers and retailers alike?

‍What do you think? Sound off in the comments below.

COMMENTS
A Solution To the Secondary Market
Also Check out 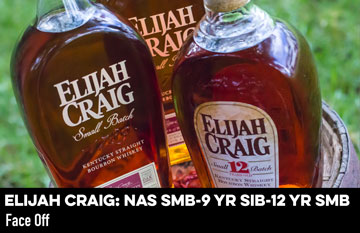