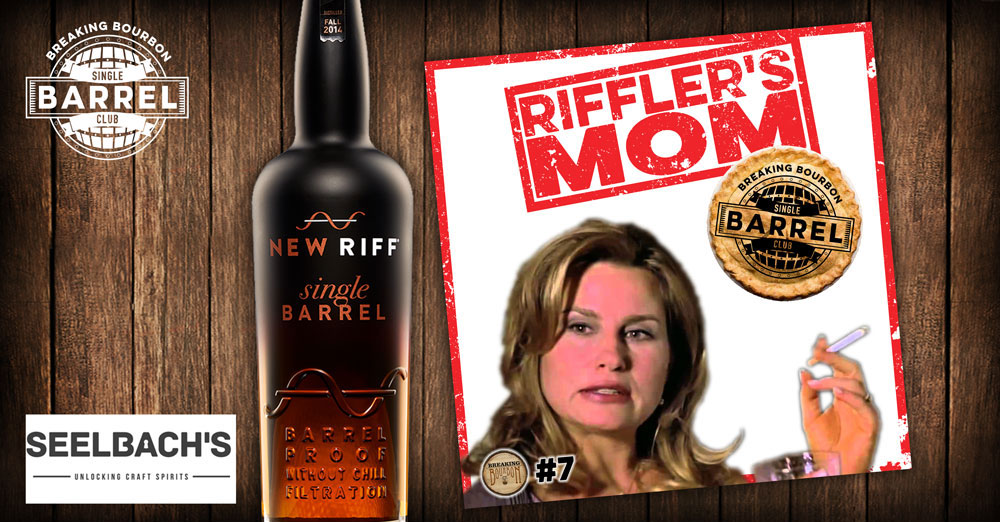 For this pick, we partnered with Seelbach’s, which was founded by Blake Riber, also the creator of Bourbonr and the Bourbonr Facebook group. An online-only retailer with a twist, we recently interviewed Riber to discuss how he’s running his shop differently than everyone else. “Unlocking Craft Spirits” he calls it - seeking out up-and-coming craft distilleries and learning about their process and tasting through their products to find hidden gems. New Riff is certainly an up-and-coming distillery that should be on everyone’s short list.
‍


‍
This pick was special because we did it live and in person at New Riff’s Newport, Kentucky location. Even better, Patreon supporters joined us for the pick. Not just any Patreon supporters either. They travelled from Florida and New York for this pick, making it extra special. Huge thanks to Saul, James, and Kay (pinch-hitting for Charles who, unfortunately, could not join us) for trekking in from a long way away to join us.

New Riff is about doing things the right way. Ken Lewis founded New Riff Distillery in the spring of 2014 in Newport, Kentucky, which is just on the other side of the river from Cincinnati, Ohio. While New Riff built up a supply of their own aged products, they sourced high-rye bourbon from MGP. They named this brand O.K.I which stands for: Ohio, Kentucky, Indiana, aka distilled in Indiana, bottled in Kentucky, and loved in Ohio. A temporary measure that only lasted a few years, the brand has now been retired and New Riff is focused on their own distillate.

With the exception of their single barrels, which are bottled at barrel proof, all of New Riff’s whiskeys are Bottled in Bond, the highest possible standard. To be labeled Bottled in Bond, the whiskey must be the product of one distillation season and one distiller at a single distillery, aged in a federally bonded warehouse under U.S. government supervision for at least four years, and it must be bottled at exactly 100 proof. Additionally, the label must clearly identify the distillery where it was distilled and where it was bottled, if different.

The process of selecting a single barrel at New Riff is effective and well thought out. An introduction and tour of the distillery kicked things off, followed by a caravan to New Riff’s second location which houses an open-office workspace, a testing room, a bottling line, barrel storage, and more. This was lead by Alina, New Riff’s Brand Ambassador who is as knowledgeable as she is excited about the process.
‍

‍
The location of the single barrels is within a large warehouse space, which was primarily empty at the time except for the barrels we would choose from and a group of empty barrels waiting for eventual use. The full, pre-selected potential barrels for the single barrel pick are racked together so you can see and touch them, and so they’re ready to thief and eventually sign the barrel head of your pick. In our case there were 27 possible single barrel options to choose from.

At this point Creola, another New Riff representative, joined the group to assist Alina. We were given handouts with barrel numbers, fill date, and tasting notes curated by various folks within New Riff and noted by their initials. A note indicating the overall proof typically ranges from 110-113 and a note that any barrels with an asterisk were light with an expected lower yield were found in the footer (we did not have any light barrels to choose from in the group). From there, we were tasked with narrowing it down to five barrels from the group - these would ultimately become our five barrels to choose from. In our case we had five people along for the pick, so it was an easy choice of simply having each person select their favorite based on the information provided and the “look” of the particular barrel - a barrel seeping gooey “barrel-candy” as Alina fondly referred to it, might be an attractive choice with little else to go on.

‍
‍Each person then had the opportunity to thief one of the barrels, filling a small glass bottle with enough liquid to be shared among the group. This is one of the single most satisfying elements of a barrel pick, and we highly recommend taking advantage of it if offered the opportunity.

From the vantage point of the barrels, a tasting room is visible through large panes of glass. The setup is perfect - 5 poured glencairns per person (one pour from each barrel, at barrel proof), large tasting sheets, pens, water, pretzels, and so on. A whiteboard in the corner would later be used to help narrow down the group’s selection. Music played softly in the background, and an ipad controlling the music and volume was offered for the group’s use.
‍

‍
Once situated, Alina and Creola left the group alone to begin tasting through the barrels.

We didn’t know which pour corresponded to which barrel, so it was a blind pick. Interestingly, this also proved that based on the provided notes alone is not the best format to select a barrel, as individuals did not necessarily end up choosing their own prior selection as their favorite.

As we started the initial round, we talked in general terms about what we were tasting, but were careful not to overlay opinions until we could get the first round of voting in. Each person took their own notes, explored the bourbons, and started individual rankings. Once ready, we called back Alina and Creola to assist us.

When making selections like this, we like to ensure no one swayed into someone else’s opinion by groupthink or a dominating personality - not that there was anyone present that would have been an issue but as a general rule. To do so, we did a blind vote - everyone closed their eyes and was given the chance to select their top three picks of the bunch by a show of hands. Alina kept tally on the white board.

After the first round we narrowed it down to three options. Alina and Creola left us alone again and from there we quickly moved away from the barrels that were eliminated (though there was a little bit of banter), and instead focused on some general discussion about the barrels that remained. What aspects did people like or not like about them? We tasted through the remaining barrels again and started to dig deeper.

Another blind vote was held narrowing the three down to two. Then back to the tasting and talking.

Finally, another blind vote was placed and the winner was selected!
‍

‍
Truth be told, every one of the five barrels was good and we could have walked away happy with any of them, but where’s the fun in that? There was a good range of variation there as well, so obvious differences made them more exciting to compare and contrast.

Experiencing the people, the process, the variation, and the banter is what makes this so much fun. We’re glad to have met Saul, James, and Kay, and our only regret was that we had to catch flights back home and didn’t have the opportunity to spend a little more time with them. Till next time!

For the custom sticker we wanted to play on the word “Riff” somehow. We also like the idea of throwbacks for these stickers, and the name “Steve Stifler” from the American Pie movies came up in conversation. The movie was released in the summer of 1999, and we have fond memories of the time. “Riffler’s Mom” parodies the movie, and lends to the idea that similar to how Stifler’s mom was portrayed in the movie, this New Riff pick is something everyone is going to want.

‍
If you’re a retailer and you’d like to get your name in front of millions of bourbon enthusiasts by becoming a retailer partner, hit us up here.
‍

Light and inviting, the nose consists of rye grain, oak, and a dash overlaying confectioners sugar. A lovely burst of sweet flavors on the palate. Sweet vanilla is mixed with rye spice, summer fruits, light vanilla, and a dash of white pepper. The finish is peppery mingling with hints of rye, oak, leather, and a dash of vanilla. A lingering heat holds on for a while. This would pair well with a nice cigar on a late summer night. ‍
‍ 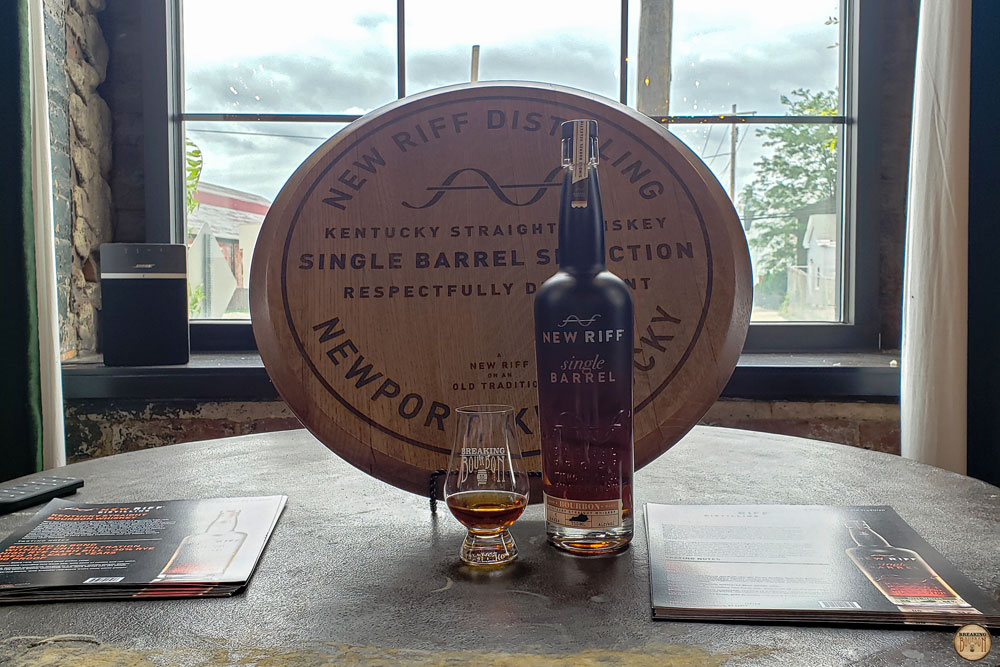