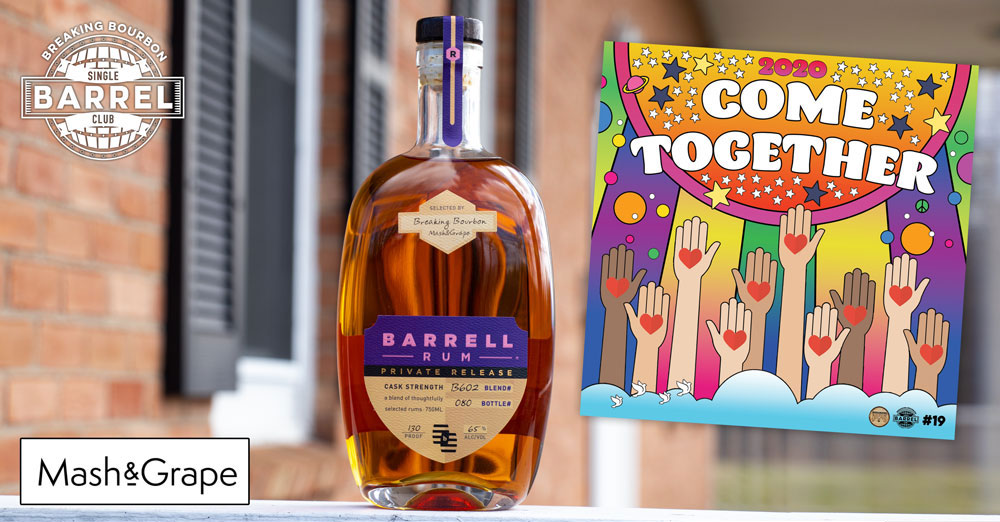 Distillery: Undisclosed distilleries from Barbados, Jamaica, Martinique, and Guyana with the largest component, Barbados Rum, making up 60% of the final ratio and the second largest component being Jamaican Rum

For this pick, we met up with company founder Joe Beatrice and master distiller Tripp Stimson at their Louisville, KY location. This is where the magic happens, and by magic we mean incredible blends come to life. While we might have doubted the concept initially, Barrell has undoubtedly proven their knack for putting together fantastic blends.

After a nice tour and the chance to meet with everyone on the Barrell team face to face, we headed into their tasting room.

We ended up picking two Barrels (SBC #12 & SBC #13) which we aptly named “Weekday” and “Weekend” based on their low and high proofs - the lower proof barrel for weekday sipping, and the higher proof barrel for weekend debauchery. After picking the barrels we started tasting some of the rums they had on hand and had an idea. What if we took one of the barrels we picked and aged some rum in it after the bourbon in it was dumped and bottled? We wanted a strong bourbon influence to shape this rum, so we decided to use the barrel from SBC #13 which had previously aged a 109.5 proof 14 year old bourbon.

Once it was decided we’d do this, the fun began. We were presented a number of different rum blends which were varying ratios of rums from different regions. We quickly dove in and started narrowing down the ratio preference that jumped out at us the most. After sampling more than we probably should have, we found a winner. It was a blend of rums from Barbados, Jamaica, Martinique, and Guyana with the largest component, Barbados Rum, making up 60% of the final ratio and the second largest component being Jamaican Rum. The blend offered just the right amount of balance between sweet rum notes and drinkability that we felt would turn out excellent with those bourbon influenced oak notes.

Once selected it was determined that the barrel would be used to barrel age the rum for approximately three months afterwards. The only thing that was left was picking a name, which after talking for a minute or two became obvious to all. You can’t have a weekday and a weekend without a hump day in the middle! And thus, “Hump Day” was initially created.

But in the final stages of releasing this rum to our Single Barrel Club, an unprecedented health crisis rocked the world - the COVID-19 Coronavirus pandemic. We wanted to help the bourbon community, those in need, whoever we could in some way. This bottle release, it turns out, offered a way to do it.

First, we pivoted on the name, renaming the release “Come Together” as a representation of people’s need to join together in the fight and helping one another through this crisis - though just to be clear we DO NOT mean that in literal terms considering the social distancing aspect of keeping yourself and those around you safe. Incidentally, the idea of two different rums “coming together” in a bourbon barrel happened to fit the bill perfectly.

We wanted to involve our Patreon supporters - those who we can honestly call our most supportive fans. We came up with two ways. First, for every bottle they purchase, we’ll donate $5 to a charity. Second, we let them pick the charity from a few different but worthy causes. It turns out we had a tie, so half of the funds raised will go to No Child Hungry and the other half will go to the United States Bartenders Guild (USBG) Foundation. Kind of perfect actually, because it turns out we’re helping folks on a few different ends of the spectrum.

Finally, we wanted to create some kind of snowball effect, and encourage others who could afford to do so to join us. Since it’s a Barrell Rum, we reached out to our friends at Barrell Craft Spirits and without hesitation they said “yes, we’re in!” Next we asked our retailer partner, Mash&Grape, and they agreed as well!

We’re encouraging any other brands, clubs, or just folks who want to help to join us. We’re sure anyone who does will be doing it for the right reasons, but we’ll also give you a shout out in an upcoming post if you match us. Here’s what you need to do:
‍

‍On the nose, sweet gingerbread combines with maple sugar candy and lightly toasted marshmallows. A touch of leather teases in the background. A spicy pop touches down on the tongue, with graham crackers, maple sugar candy, and dark fruit swirling in. Light smoke, creme brulee sweetness, and a hint of butterscotch follow. It finishes with a warming heat emphasized by dark fruit and raisins. Sweetness lingers, leaving behind a delicate brown sugar aftertaste. Clocking in at a whopping 130 proof, this bourbon drinker’s rum is dangerously easy to drink.