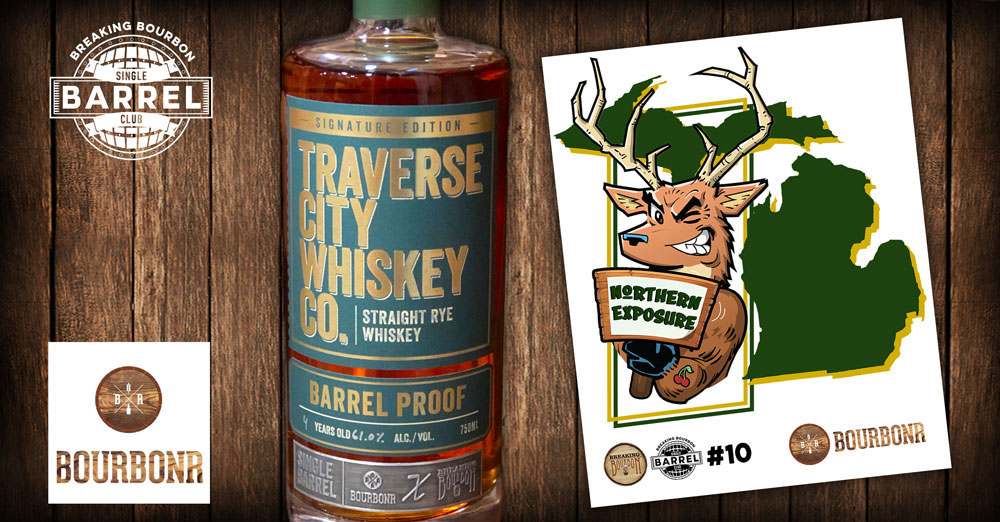 For this pick, we partnered with Blake Riber, founder of Bourbonr and Seelbach’s. An online-only retailer with a twist, we recently interviewed Riber to discuss how he’s running his shop differently than everyone else. “Unlocking Craft Spirits” he calls it - seeking out up-and-coming craft distilleries and learning about their process and tasting through their products to find hidden gems.

Our barrel selection took place in the building referred to as TC2, which is currently the company’s largest operational facility and where barrel aging, blending, proofing, and bottling take place. By the numbers, Traverse City had over 1,000 barrels aging, and estimated over a quarter million bottles were produced by hand over the past year. Their increasingly popular cocktail cherries are also produced from this location, at a rate of over 850 jars per day, totaling over 85,000 for the year.

Unlike many larger distilleries that taste barrels by selecting a sampling from a particular lot, Traverse City still operates on a smaller scale tasting every barrel before it makes its way into a final product. Which barrels are offered for these picks is taken pretty seriously, as company co-founder Chris Frederickson noted, “we’ll go hunting, we crawl through the racks.”

For our pick we were presented with eight barrels total, four bourbons and four ryes. They were presented at barrel proof, which would be the final bottling proof as well. While we know which four were bourbon and which four were rye, we did not know any other details about the barrels. We assumed most or all were sourced from MGP, but also considered the possibility that some of Traverse City’s in-house distilled barrels might be in the mix as well.

We started with the four bourbons. We quickly sorted them into two groups - two of them were crowd pleasers - some spice on the nose, caramel and vanilla sweetness on the palate, and light lingering oak in the finish. The other two were more interesting, but introduced a pine note that wouldn’t be for everyone. We later learned the more approachable two were distilled in 2012, and the more unique tasting two 2015. All four were distilled by MGP and used the 75% corn, 21% rye, 4% malted barley mashbill.

Moving onto the four ryes presented a wider variety, but almost immediately we knew it would be a rye and not a bourbon for this pick. One presented as more mainstream and familiar, which we would later learn was MGP distillate. Another presented as subdued by comparison, and was immediately eliminated. Two of the ryes had similar qualities, and we liked both of them. Warming with a prominent rye spice note throughout that transitioned to sweet on the finish, it came down to selecting one of those two. While it was a close comparison, the rye with a longer finish and more warming “hug” ultimately took it. This would be our barrel.

At this point we learned that the barrel selected was distilled in 2015 by Traverse City Whiskey Co. and clocked in at four years old. It was stored high, on level four on the outer block wall. It clocked in around 120 proof (we’d later learn it was exactly 122.02, which dropped slightly to 122 exactly when bottled).