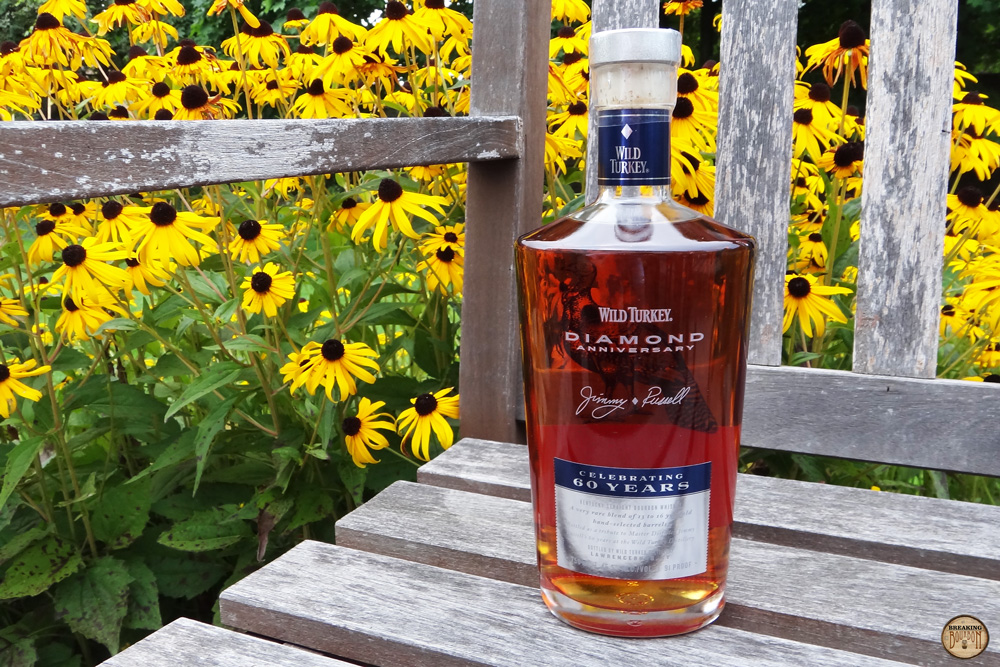 Batch # B14-0035, The Diamond Anniversary is a blend of 13 to 16 year old whiskies hand-selected by Jimmy Russell’s son, Eddie Russell, as tribute to Jimmy’s 60 years making whiskey. 36,000 bottles are being released in the United States.

Dry, but not overly so. Aged wood, tobacco, cigar box, leather, vanilla, spice, and a hint of char make for a fairly complex sip. Everything is balanced and the individual flavors are fairly subtle here with wood elements being the most dominant although not overbearing.

The finish starts off with a little more alcohol burn than would be expected for the proof, and then youthful notes of caramel and vanilla take over, but only briefly. Aged wood, tobacco, and cigar box pull through and then linger for some time. As a whole the finish transitions quickly from spicy-sweet into woody and bitter.

This is a bourbon that tastes over a decade old and delivers subtle balance as opposed to an in-your-face flavor punch. If you’re looking for another bourbon that pays homage to Jimmy Russell’s 60 years in the industry you certainly won’t find one. However, if you’re looking for an easy-to-sip balanced bourbon with notes of wood evidencing its age you can find other well balanced bourbons with somewhat similar flavor profiles.

I wanted to dig a little deeper into the flavor differences between this offering and other Wild Turkey offerings, as well as comparisons with some other limited release bourbons I consider well balanced. For this comparison I pulled out a few bottles from my cabinet: Wild Turkey Tradition, Russell’s Reserve Single Barrel, Eagle Rare 17 (2013), and Parker’s Heritage Promise of Hope.

As far as I’m concerned anything priced over $100 enters a territory of “What am I really paying for?” Top notch bourbons can be purchased for under $100, so why pay more? Wild Turkey is steeped in history and Jimmy Russell’s 60 year tenure is a milestone few will attain. With 36,000 bottles released in the United States it will be fairly accessible for those who seek it out. Compare this to the Buffalo Trace Antique Collection, which will have a total release of around 31,890 bottles in 2014 - this figure includes total production of ALL 5 offerings combined folks. Although we won’t see Diamond Anniversary bottles sitting on the shelves for too long, this is probably one most enthusiasts will have an opportunity to buy if they so choose as the price point is just high enough to make people think twice before purchasing. Don’t expect to be blown away simply by the juice with this one, instead go into it knowing you’re paying a premium for a well-balanced bourbon that pays homage to a great man and you won’t be disappointed. If you don’t know who Jimmy Russell is, buy something else.

Although this bourbon lacks an obvious WOW factor and it’s evident you’re paying a premium in commemoration of a milestone of a great man, this is a must have bottle for every Wild Turkey fan. For everyone else, I’d recommend a pour at a bar.

This is a bourbon we want to love. Hands down Jimmy Russell is one of the most respected in the industry. I mean, 60 years in the business, that deserves respect and he’s earned it. Most of Wild Turkey’s offerings are younger whiskeys, as Jimmy himself has been known to say he only likes bourbon aged 12 years or less. Furthermore, the 91 proof point for this release is a head scratcher as a proof of 101 would seem much more appropriate - maybe it would have added some welcomed flavor intensity to this as well. Despite that, Eddie chose a blend of 13 to 16 year whiskeys at 91 proof and must have had good reason to do so. This offering contrasts with Wild Turkey’s other offerings in that sense, making it special in its own right. It would be much more difficult to hand select 6-12 year old barrels with a resulting product that stood out from their standard Russell’s Reserve Single Barrel, a great bourbon that’s readily accessible for under $50. I can only guess that Eddie felt the need to target older barrels in an effort to deliver a bourbon that differentiated itself from Wild Turkey’s standard lineup and the proof of 91 was necessary to bring the wood flavors into balance.

Buy Wild Turkey Diamond Anniversary Bourbon at Frootbat
‍The sample used for this review was provided to us at no cost courtesy its respective company. We thank them for allowing us to review it with no strings attached.
360 video 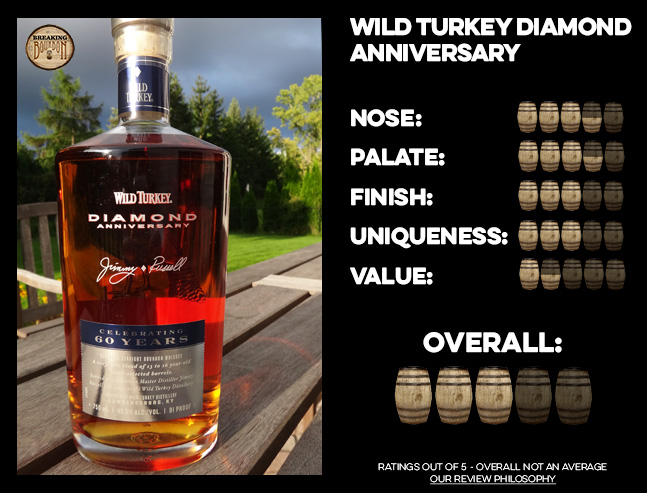 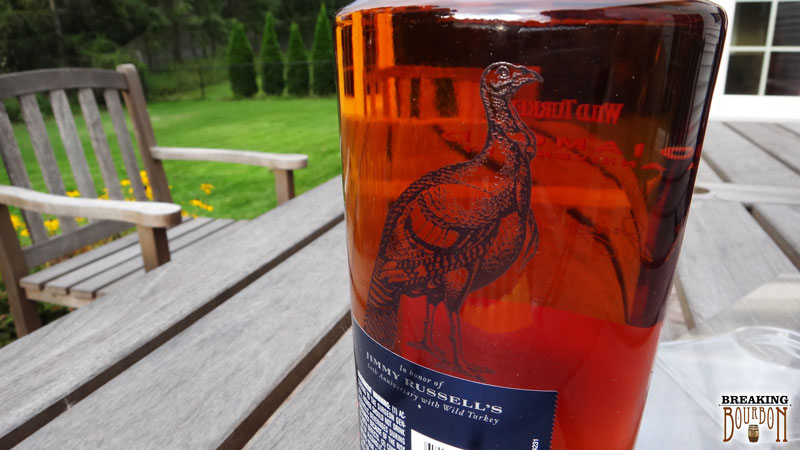 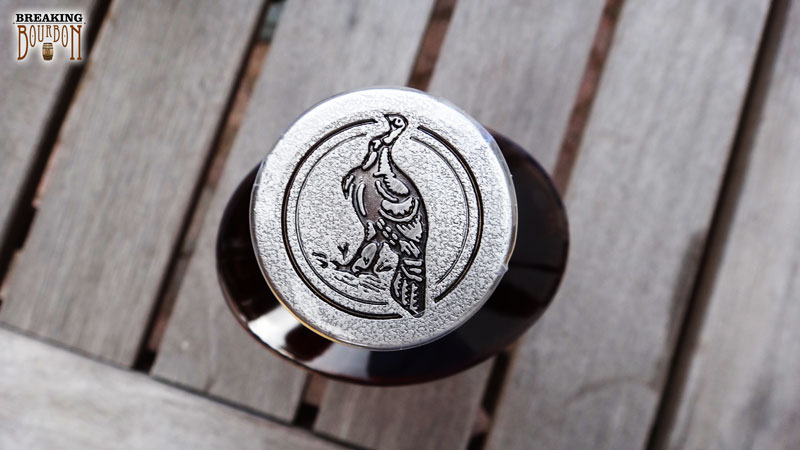 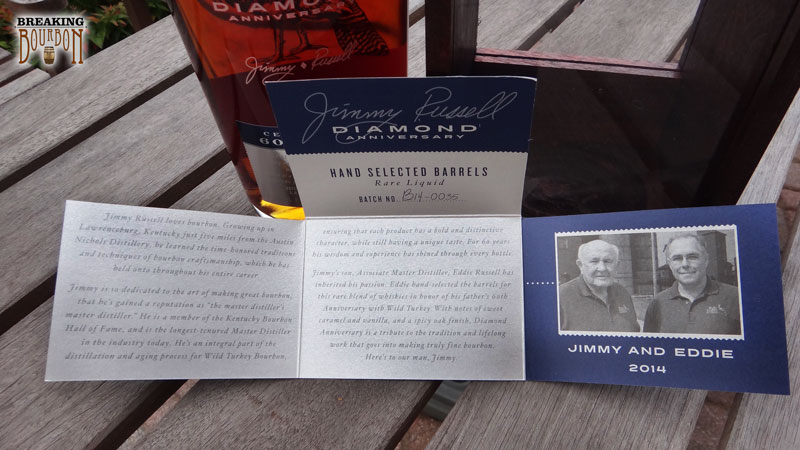 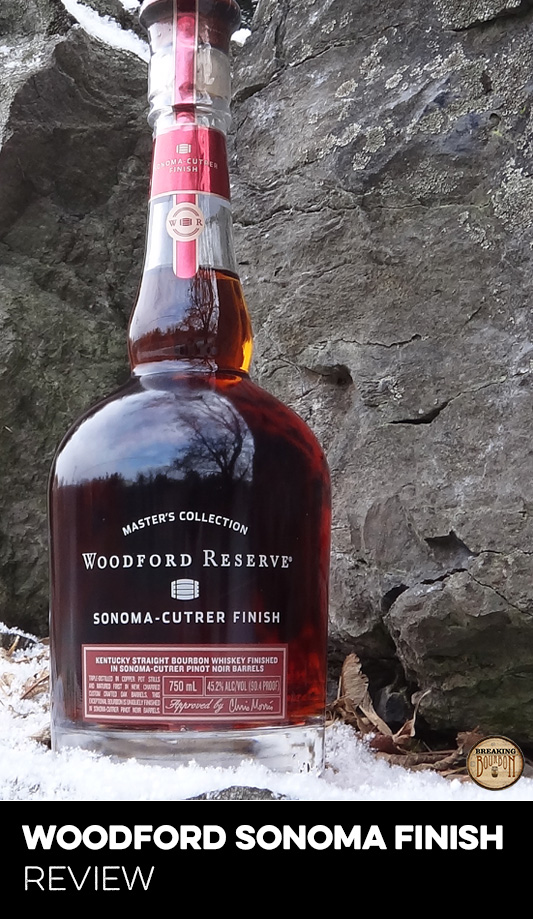