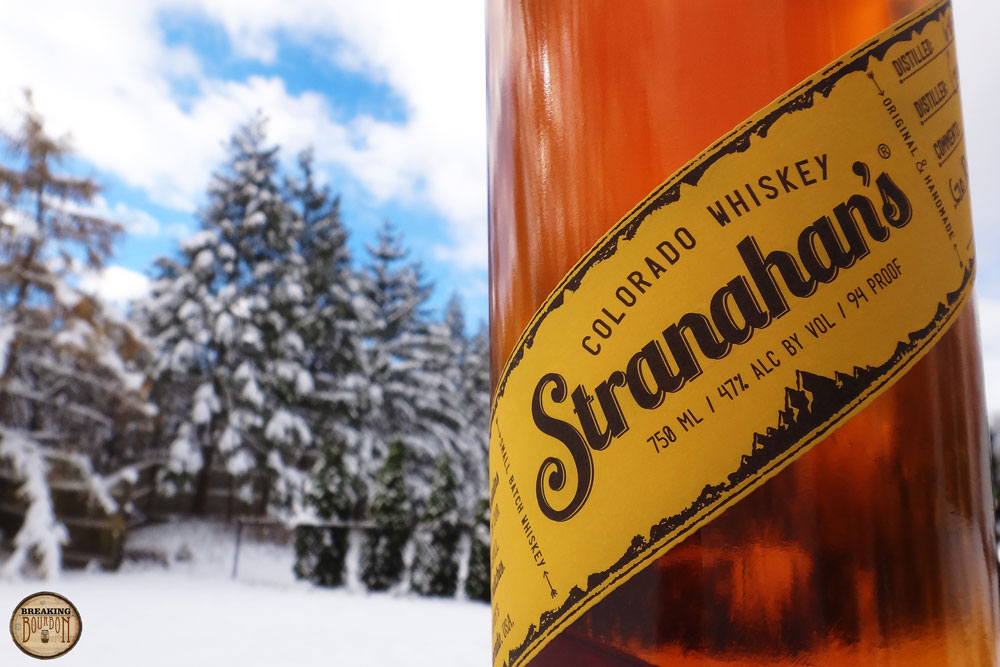 Stranahan's was founded by Jess Graber and George Stranahan, whom the whiskey is named after, in Colorado in 2004. It’s a small batch whiskey consisting of 10-20 barrels that is a blend of 2-5 year old whiskey in new charred oak barrels. Stranahan’s is made from 100% rocky mountain barley & water.

Each bottle is hand-bottled by a rotating crew of volunteers and contains the handwritten date the whiskey was distilled, whom it was distilled by, and a comment from the individual bottling it. The bottle being reviewed was distilled on 6-11-12 by Greg. The individual who bottled it left the comment “Go Rockies!” These one-off comments are a nice touch which makes each bottle of Stranahan’s unique. Additionally, each bottle contains a metal cap that can be used to pour a perfect 3 ounce pour.

The nose on Stranahan’s is different than your typical American whiskey, and for good reason. They’ve basically produced the equivalent of a malted scotch in Colorado. I’m greeted with a blast of sickly sweet scents of vanilla, fresh marshmallows, and apple butter along with oats and, oddly enough, a hint of creamed corn. There is a complete absence of  alcohol burn on the nose.

To me this is a great unique scent profile that you just don’t find when drinking other American whiskeys. I will say that the nose may not appeal to everyone, especially those who are used to drinking bourbon or rye. That being said, I kept going back to smell this throughout the tasting and really enjoyed the uniqueness it brings to the table.

This is a really interesting palate. Oak is very noticeable along with light barley and oats. A little deeper is vanilla, mixed dried fruit, and a touch of honey and dried nuts. It’s certainly an interesting full flavor combination and one you’ll want to linger on. When an individual is starting to really get into whiskey, and a whiskey is described to them as having a really good mouthfeel, it’s sometimes hard to understand what that means. If you’re in this situation, then I really recommend you try a glass of Stranahan’s neat, as this whiskey has a fantastic mouthfeel. Rich and full, the flavors coat your tongue and this whiskey sits heavy in your mouth.

A sharp dose of pepper dominates the initial burn, almost like biting into a peppercorn accidentally. After this spike the heat lingers for a bit. Ironically, the burn is kind of nice once you get past the initial sting, making for a long lasting sweet finish rounded out with elements of burnt brown sugar, caramel, and dark chocolate.

When compared to other American whiskeys, this is one of the more unique ones. There are few other craft distillers out there who are making as big a waves as Stranahan’s has been over the years. While others such as Balcones and Ranger Creek also make 100% barely whiskeys, they also compete in the bourbon and rye space too. With bourbon and rye being on fire these last few years, you have to give Stranahan’s credit for taking a more unique approach to whiskey making and sticking with just 100% barley whiskey as their only product on the market. Sure they have their Diamond Peak and Snowflake releases, but those are just variations on the aging and barreling of their core 100% barley product. The end result could have been disastrous, however it’s pulled off quite nicely here.

The problem with craft distilled products is that distilleries try to command a price that isn’t in line with current well established whiskey products in the market. While in line with other craft distillery pricing, Stranahan’s still commands a price that I feel might be too high for some. True you’re getting a really unique whiskey experience, that you normally don’t get with other craft products, however for $55 you’re competing with some really great bourbons and ryes in the market. I would prefer to see the price come in at $45 to make it more accessible to those looking to add some variety to their collections.

For something this unique I would recommend that people try it at a bar before they buy a bottle. You’ll either really be into something this different, or it won’t be your cup of tea and you’ll have saved yourself $55 plus dollars on a bottle.

Funky, fresh, and so uniquely different it’s worth a shot to seek out and try.

Sure you could call Stranahan’s an American Single Malt and try to compare it to 100% malted barley scotches in the marketplace based on just the ingredients used and the aging ruleset Stranahan’s follows, however I think that would be an unfair comparison. Stranahan’s isn’t trying to emulate scotch makers, instead they’re taking a unique approach to distilling American whiskey in a way that others currently aren’t. I had a chance to speak with current Master Distiller Rob Dietrich at this year’s Chicago WhiskyFest, and I can say the man is passionate about creating fine American whiskey. It’s reassuring to see such fire out of a company that could easily rest on its young, yet well established, laurels.

There’s no doubt that this is a different whiskey product than a bourbon or rye drinker would be used to trying. Its nose and palate are as funky as they come and people are either going to love it or hate it. Personally I’m a big fan and it’s nice to see an American whiskey maker shaking up the market. It’s a funky twist on American whiskey that everyone should try for themselves before making a judgement call on this unique brand.

Buy Stranahan's Colorado Whiskey at Frootbat
‍The sample used for this review was provided to us at no cost courtesy its respective company. We thank them for allowing us to review it with no strings attached.
360 video 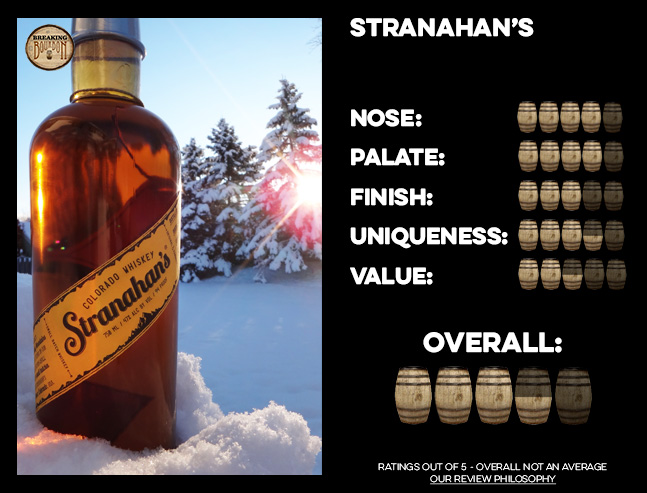 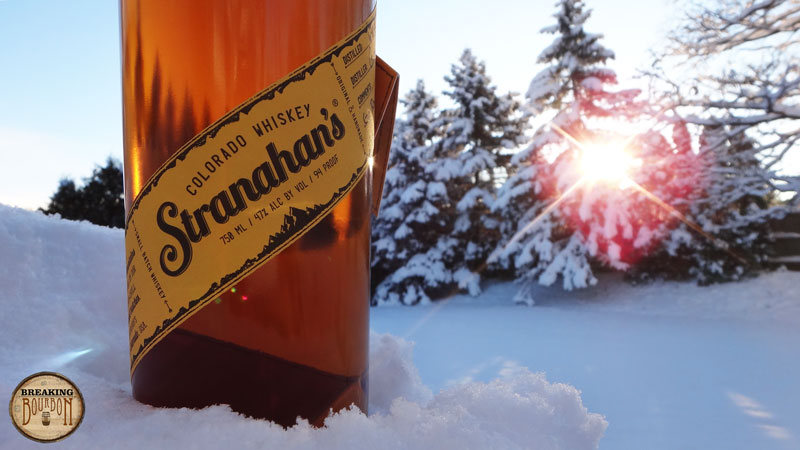 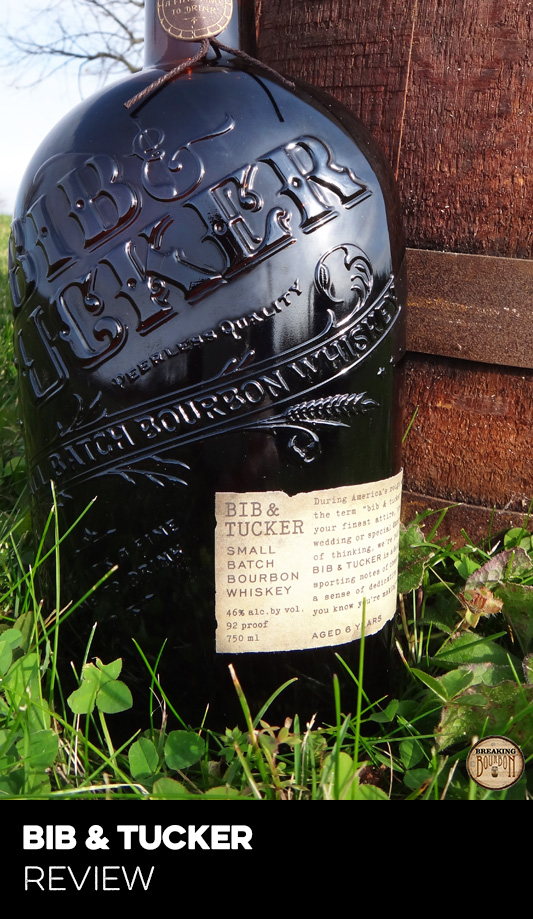