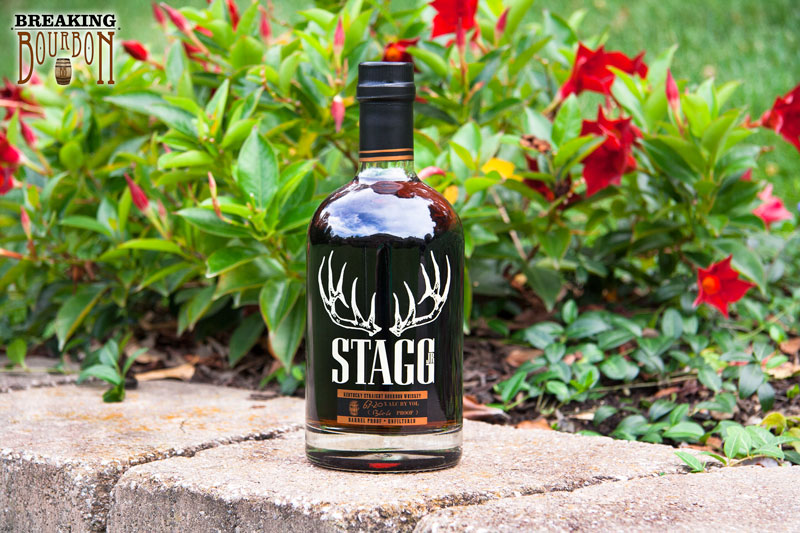 The notes on the bottle indicate the bourbon ages for “nearly a decade,” and is thought to be 8-9 years. Buffalo Trace in 2017 confirmed it to be 7 years. This is the essentially a younger version of the widely acclaimed George T. Stagg with a different flavor profile due to the fact that it shares the same mash bill but Trace is not as particular with barrel locations as they are with the original and, to state the obvious, it's not aged as long either. George T. Stagg is a bourbon on many enthusiasts’ top 5 list and part of the annual Buffalo Trace Antique Collection (BTAC) release. Stagg Jr was first released in 2013 and will be continue to be released in small batches at varying proofs unless Buffalo Trace decides to do otherwise.

I let this sit in the glass for about 10 minutes before nosing it. Even then my nostrils fill with alcohol. Raisins, citrus, chocolate, and caramel also manage to pull through. This is expected for the proof but it’s not a warming burn like Knob Creek Single Barrel. It’s more of a deterrent for me.

Very hot. Traces of raisins and citrus mingle throughout, but are muted by the sharpness of the heat. If you read my review on High West Double Rye, I talk about spice without heat. This is the exact opposite, it’s heat without spice. I don’t care for it to this extreme and it makes for a fairly unpleasant and unbalanced sip.

A sharp dose of pepper dominates the initial burn, almost like biting into a peppercorn accidentally. After this spike the heat lingers for a bit. Ironically, the burn is kind of nice once you get past the initial sting, making for a long lasting sweet finish rounded out with elements of burnt brown sugar, caramel, and dark chocolate.

Although the barrel proof options are growing, there are still a limited number of options out there. Consumers are demanding higher proof offerings and we’re seeing those move fairly quickly off the shelves. This is a limited batch release, meaning that Buffalo Trace has been releasing this in fairly small batches 3-4 times annually at varying proofs as enough bourbon meets the desired flavor profile. It’s deliberately inferior to George T. Stagg, as this is necessary to maintain the status of that annually released product as a top notch and sought after bourbon, with Stagg Jr being a prelude to what is to come only once a year. Elijah Craig is also doing this with their barrel proofoffering, and we have seen that move very quickly from the liquor store shelves as well. The flavor profile of Stagg Jr may not be to my liking, but it is unique none-the-less. From other opinions I’ve read that the releases vary in quality and they seem to be getting better as time progresses. Bourbon enthusiasts will need to try this themselves in order to make their own determination. For me, it’s uniqueness of flavor is the best thing Stagg Jr has going for it.

Despite the fact that I find this overly hot, not everyone shares this opinion. I’ve even heard people say they like it better than the original George T. Stagg. Based on this and the fact that it’s around 8-9 years old (or 7 years based on recent BT comments) and released at barrel proof, an MSRP of $50 is really a fair deal. If this were more balanced I would rate it higher, but the fact remains that Buffalo Trace still has some work to do in choosing the barrels to batch together for this younger release in order to gain mass appeal and uphold an ongoing market. Now that the newness has worn off, we’ll see if enough people like this to continue sales at the same rate they’ve been so far.

For me, this is a hot mess. However, due to its unique flavor profile not everyone will feel that way so this is really one you will need to sample for yourself.

This is one I wanted to love. In fact, at my first opportunity I bought 2 bottles before ever trying it just to be sure I’d have enough. Unfortunately, I just can’t seem to find enjoyment with this bourbon. Although it maintains a unique flavor profile the excessive heat drowns out the finer attributes this bourbon strives for. Where George T. Stagg is a robust and truly remarkable bourbon, Stagg Jr feels more like an unfinished product that still needs some time in the barrel to round things out.

I tried to revive this by adding water, mixing with other bourbons, and even mixing in drinks. No matter what I did, it seemed to bring a hot strange flavor wherever it went. With some water, it does mute the heat but mutes the flavors right along with it. The warming burn in the finish which was my favorite part of the sip without water also disappears. Unfortunately, I think the only solutions are better barrel selection or just simply being someone with a taste preference for what’s in this bottle.

Buy Stagg Jr. Bourbon - Batch 1 at Frootbat
‍The sample used for this review was provided to us at no cost courtesy its respective company. We thank them for allowing us to review it with no strings attached.
360 video 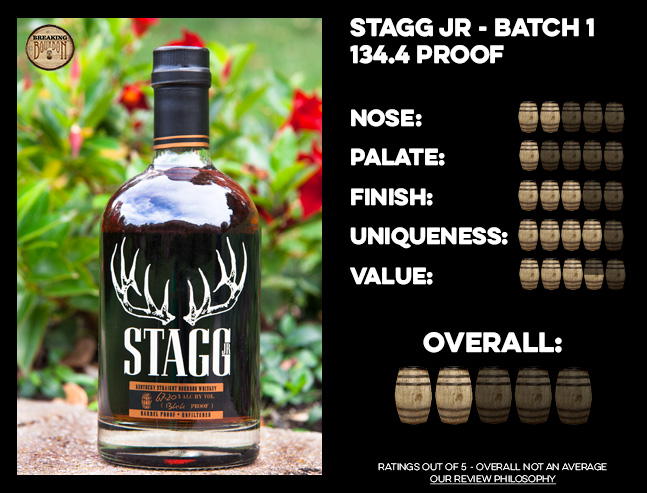