This brand is owned by the Medley family, formerly of the closed Medley distilley in Owensboro, KY, which is owned by CL Financial/Angostura who do not seem interested in reopening it. They produce Wathen's, Old Medley and Medley Brothers Kentucky bourbons, which are bottled by Frank-Lin. Old Medley is the same recipe as Wathen’s, but aged 12 years. Only 2,500 cases are being distributed for this one time release.

A sweet aroma hits you first, followed by a good amount of oak.  A surprise amount of alcohol hits you for a 86 proofer. A longer whiff conjures up grain, leather and rye notes.

It has quite the flavor blast of aged vanilla, caramel and a dash of Mr. Goodbar. The bourbon is on the sweet side before the spice from the rye mingles in. The palate has a decent amount of depth to it and is definitely the highlight of this bourbon.

The alcohol taste immediately hits the roof of your mouth and lingers. Despite it being a full-bodied bourbon, the flavor drops off immediately with little trace that it was even there. Dry finish.

There’s nothing immediately flashy with this bourbon. The nose is surprising sweet with layered aromas despite the oak and alcohol being very present. The palate comes off at first as any run-of-the-mill bourbon. It’s not until you have a few sips and let the bourbon sit on your tongue that you realize the finer points the bourbon has. The sweet/spicy palate can be interesting if you pay enough attention to it.

At $50 a bottle it’s overpriced, plain and simple. It's no doubt a quality bourbon, but it isn’t unique enough to warrant being priced on the high side of bourbon’s pricing curve. There are far too many quality bourbons priced in the $30 and low $40 range that are just better than this. That being said, there are some stores selling this below MSRP, which muddles the discussion. $40 for this bourbon is an average value. At the MSRP of $50, it’s overpriced.

A straight forward and quality bourbon, but largely forgettable.

In music you often hear the term "deep cut" or "deep track" to describe a lesser known song from an artist.  Old Medley kind of feels like a deep cut. It's not a bombastic bourbon but it has some finer points that make it worth visiting or revisiting. If you’re looking to branch out beyond the usual suspects you find everyday at the liquor store, Old Medley can play that role well. There are plenty of decent aspects to this bourbon that will keep anyone happy, there just aren’t any that will excite you.

Buy Old Medley 12 Year Bourbon at Frootbat
‍The sample used for this review was provided to us at no cost courtesy its respective company. We thank them for allowing us to review it with no strings attached.
360 video 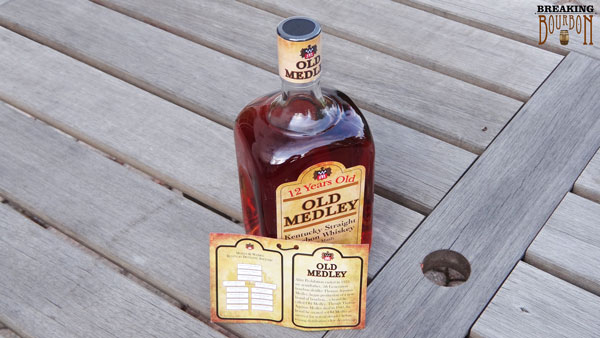