Age: NAS (At least 4 years based on TTB regulations)

The Old Grand-Dad brand was created by Raymond B. Hayden and named after his grandfather Meredith Basil Hayden, Sr. The bourbon has been in production since 1882, including during Prohibition when it was produced by American Medicinal Spirits Co., a pharmaceutical company. The brand has changed ownership numerous times since it was originally created and is now owned by Beam Suntory and was marketed as part of their “The Olds” Collection which also includes Old Overholt, Old Tub, and Old Crow. Notably, the website theoldswhiskeys.com (noted on the label) now redirects to the Beam Suntory website, and Old Grand-Dad is best showcased on the beamdistilling.com website.

Light cinnamon accompanied by vanilla, caramel, and a trace of baking spices are evident, but discreet. A swirl of the glass reveals a touch of oak along with green apples, though the scents are fleeting. While the aroma isn’t off-putting in any way, its overall lightness prevents it from reaching its potential, resulting in a below average nose simply for that reason.

Baking spices and a touch of cinnamon coalesce, forming a spicy base. A familiar caramel note offers a contrasting sweetness, accompanied by light apple. The intensity on the palate is amplified by comparison to the nose, undoubtedly aided by the bourbon’s forward spiciness. And while still light overall, the mouthfeel has more weight than I would expect from an 80 proof bourbon providing adequate heft.

As the baking spice and cinnamon dissipate, a sweet brown sugar flavor develops. The sweetness is accented by traces of apricot and oak, which quickly dissipate back to a lingering light spice. Light and approachable, the finish caps the palate off nicely maintaining a similar level of intensity.

Old Grand-Dad is one of the oldest and most storied brands, yet it receives little attention from bourbon enthusiasts or marketing effort from the brand’s current owner, Beam Suntory. This might be due simply to the fact that it is a legacy brand offered at a head-scratching low price point that likely has little room for anything other than simply fulfilling the existing supply chain and keeping existing consumers happy, potentially drawing them deeper into Beam’s other brands.

Old Grand-Dad’s proof range runs from 80 to 100 for the bottled in bond version, to 114, establishing a nice range, with similar flavor notes threading their way throughout. The 27% rye mashbill used to make Old Grand-Dad undoubtedly helps amplify the spice notes, giving more oomph at each proof point than would be expected. Bourbon must be bottled at a minimum of 80 proof, so the standard 80 proof Old Grand-Dad bottoms out when it comes to allowable proof. This isn’t to say lower proof bourbons are bad, but watering down bourbon to the greatest extent possible certainly minimizes the bourbon’s potential to differentiate itself from other bourbons in the marketplace. This is true of Old Grand-Dad as it is with just about every other low proof bourbon, as its light nature mutes the flavors holding them back from their full potential. Despite this, Old Grand-Dad’s somewhat robust nature allows its flavor profile to peek through even at 80 proof.

While my personal preference is for the 100 proof Bottled in Bond version, which balances flavor intensity and drinkability the best of the three Old Grand-Dad bourbons, there is certainly a market for a lower proof version. This is especially notable by comparison to another Beam Suntory brand, Basil Hayden. Offered in high end packaging, lacking an age statement (it used to carry an 8 year age statement, which was dropped years ago), and bottled at the same proof and with the same mashbill, Basil Hayden is a very popular bourbon offered at two to three times the price of Old Grand-Dad. Notably, it offers greater, equal, or even less of a drinking experience depending who you ask. Other bourbons in the same price range offer tremendous value as well, including Evan Williams (Black Label), Benchmark Top Floor, but they are proofed a little higher and often priced that way as well. Going to 80 proof generally sinks to a different level, and price point, finding bourbons such as Quality House Old Style Bourbon coming in at only $13 for a 1L and Benchmark Old No. 8 Brand Bourbon coming in at $10 for a 750mL, proving the fight for bottom shelf rights is real. But all in all, when we get to $20 or less for bourbon, it quite simply comes down to your flavor preference, because there is no good reason not to try them all in this price range.

At 80 proof and for less than a Jackson, the historic Old Grand-Dad brand is a value-seeker’s dream offering quality bourbon at a very low price point.

Old Grand-Dad seems like a brand that many respect, but rarely talk about. Produced since 1882, Old Grand-Dad is one of the brands that has been around so long it speaks for itself and likely has a core following that doesn’t really care what anyone else thinks about it. While its price point has remained low through the ebbs and flows of bourbon cycles and the label has remained relatively similar (and old-feeling), it’s unlikely new bourbon consumers are giving it much thought. Considering the fact that Beam Suntory’s own Basil Hayden Bourbon can be packaged and sold for nearly three times the price, this is certainly by design. I respect Beam’s positioning of Basil Hayden as a premium bourbon product in the marketplace, and at the same time I appreciate the fact that they have kept Old Grand-Dad so affordable. I can’t stress enough the value Old Grand-Dad offers if you enjoy lower proof bourbons and can get past the (possibly) deliberately uncool label. The 80 proof version of Old Grand-Dad is held back from reaching the heights of its higher proof counterparts simply because it’s watered down to such an extent. The resulting bourbon may just be average overall, but when the majority of inexpensive 80 proof bourbons are anything but, this is something to take notice of.

Buy Old Grand-Dad Bourbon at Frootbat
‍The sample used for this review was provided to us at no cost courtesy its respective company. We thank them for allowing us to review it with no strings attached.
360 video 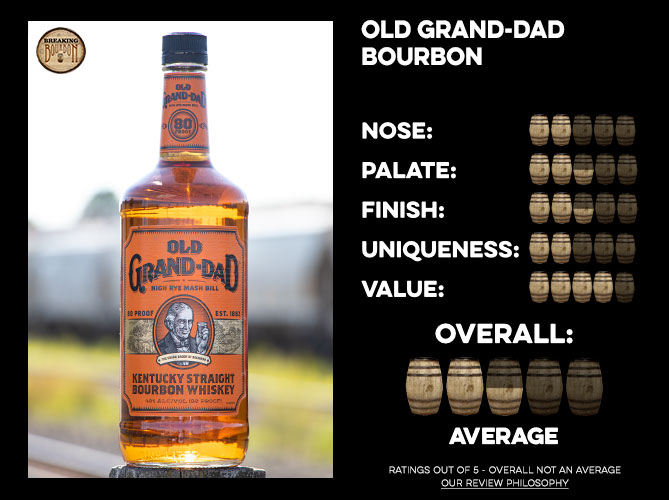 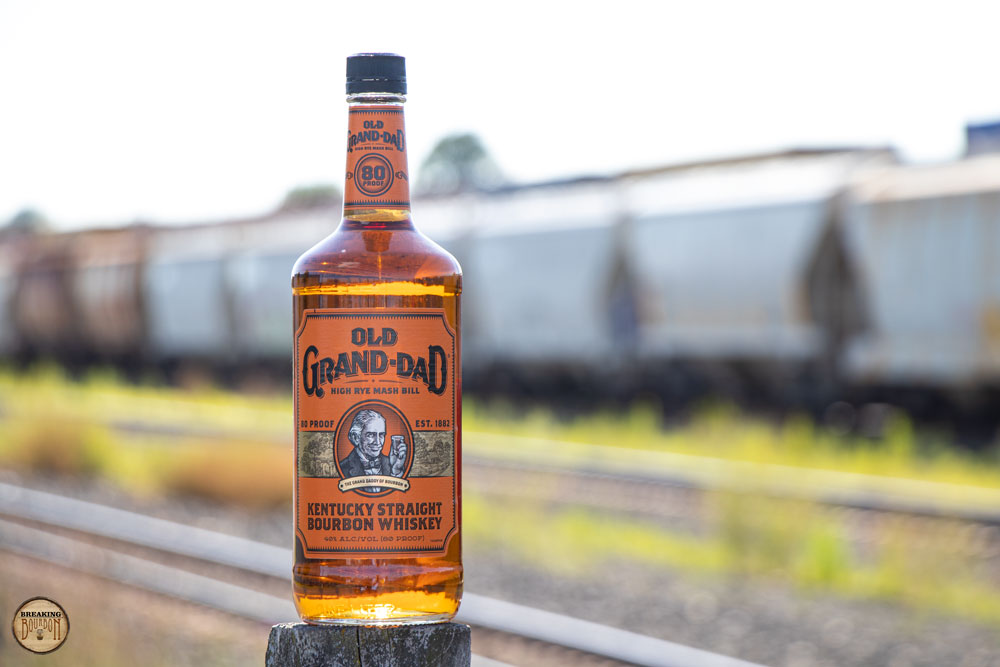 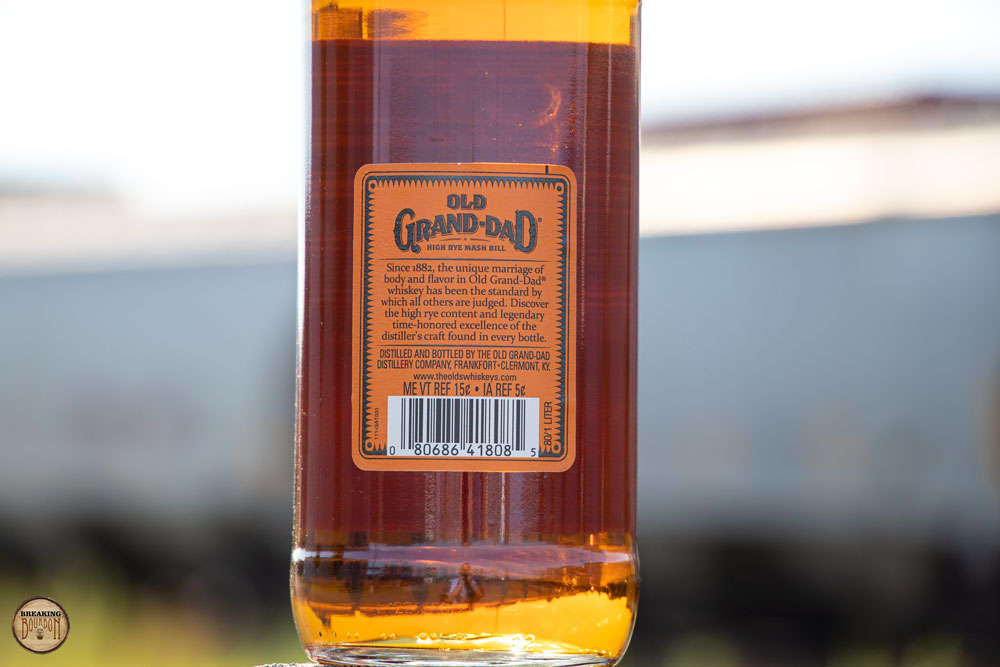 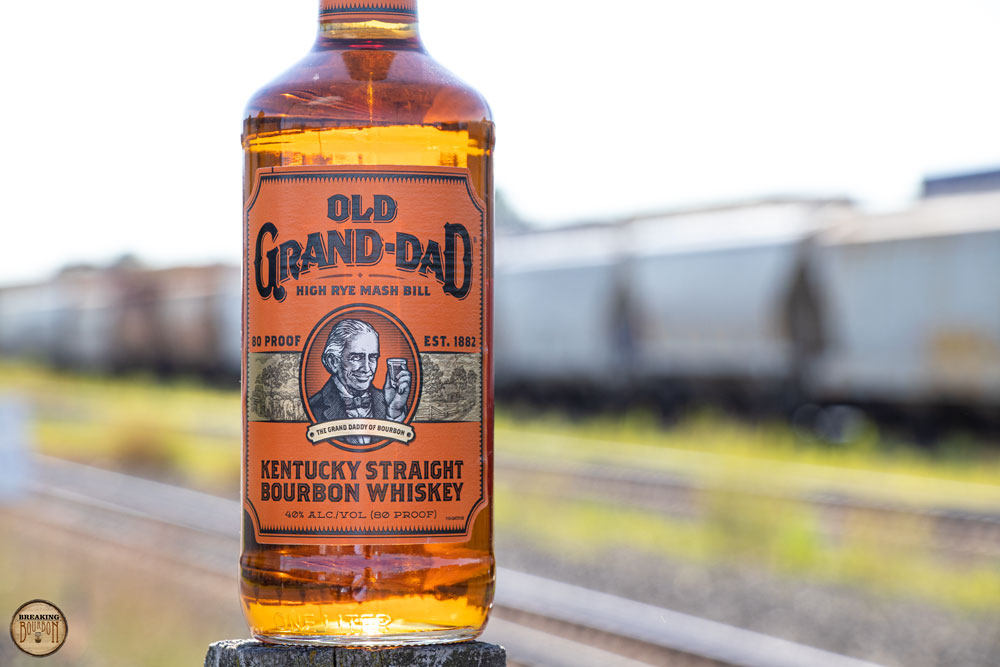