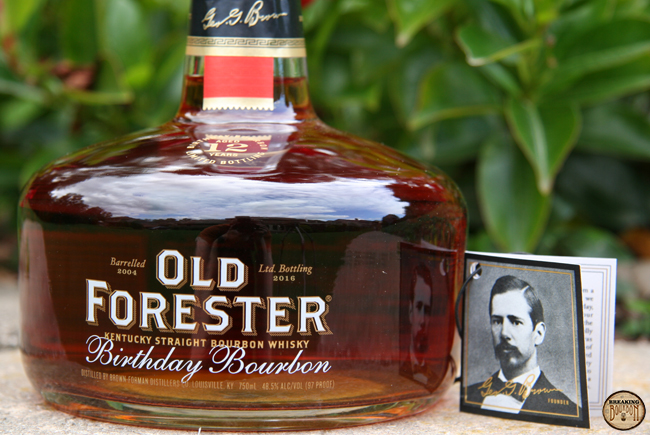 September 2nd marks the birthday of George Garvin Brown, one of the founders of Brown-Forman. To honor him, Brown-Forman released an Old Forester Birthday Bourbon. This bourbon is a special annual release that started in September 2002 and varies year to year based on age, warehouse location, number of barrels used, and other various factors. The bourbon comes in a special old fashioned glass bottle and is an anticipated release every year in the bourbon community. This year marks the 15th year that Brown-Forman has offered this bourbon.

For the first time since 2012, Brown-Forman released more detailed information on the barrels selected for this year’s edition. The 2016 release is composed of 93 barrels, resulting in a total of 14,400 bottles being released. This makes 2016 the largest release of Birthday Bourbon ever. The bourbon was originally barreled on June 4, 2004 and aged for 12 years on the 5th floor of Warehouse K. According to Brown-Forman, these barrels were located near a window facing west, allowing them to be sun kissed.

The Birthday Bourbon series has always delivered a delicious nose that you want to linger on, and this year’s edition lives up to the standard set by past editions. A delightfully rich nose reveals upfront scents of honey, vanilla, fresh cut flowers, and a delicious dose of bubble gum. Further nosing reveals delicate notes of aged oak, leather, and a hint of dried golden raisins.

Creamy notes of rich breakfast buns mix with bold citrus flavors and rich oak. All of these flavors mingle together to form a palate on the sweeter side that is delicate, yet full of flavor. This has a lighter mouthfeel that forces you to hunt a little harder for the full picture, but it’s worth the reward. It’s not the deepest palate, but can hold its own in the series, and reminds me a lot of the sweet creamy palate of the 2014 release. It’s a nice improvement over the dry palate found in last year’s bottling.

The finish has all the right ingredients; a dab of tempered heat up front, a nice amount of oak interweaves with a rich syrupy flavoring sprinkled with brown sugar, and a lingering subtle oak taste that lingers for a while. This sounds like it should be a grand slam, but after a complex and rich experience up to this point, the finish seems to fizzle out, versus trying to go out on a high note. This unfortunately seems to be a trend in recent years with the finish being the weakest part of each sip.

I’m happy to see that Brown-Forman brought back more detailed aging notes this year. Marketing mumbo jumbo on “westward facing windows” and “sun kissed” whatnot aside, this earns a unique placement in the series. This is partly due to the fact that it’s the largest release ever, but also for once again delivering a tasty flavor profile that makes you look forward to the next sip. In a year of some mundane releases, the unique nose and palate were refreshing to experience.

The Old Forester Birthday Bourbon series is one that consistently delivers a unique experience that has yet to disappoint me in a given year. While each release is different, such as the drier flavor profile of the 2015 edition or the bold and complex flavor profile of the 2013 edition, they all deliver an experience that never lets me down. A lot of people love consistency in a limited release, and that’s okay. However for this series, the ability to consistently deliver a unique experience is what’s so great in my opinion. It makes me look forward to and wonder what the next year will bring.

I’ve mentioned this every time I’ve reviewed this series before but I’ll say it again, my biggest gripe for this series is the bottle design. I realize that Brown-Forman is trying to play up the fact that it's a celebration bottle and brought it to retail in an "old fashioned" style bottle. However, it takes up a lot of shelf space and is a true pain to pour from. I’m sure the design won’t change anytime soon and I’m sure I won’t stop complaining about the design on future editions.

The value conundrum with this bourbon goes far back and returns again this year. Before the bourbon boom hit, this series was reasonably priced at $40 up until 2009. Brown-Forman has capitalized on the bourbon boom and has slowly been raising the price, capping off at $80 for the 2015 edition. While $80 seems like a lot of money for this series considering its past price points, it’s the new norm.

Amazingly enough, even in this booming market, the price for this year’s edition hasn’t gone up and has actually held steady. As the Old Forester Whiskey Row series continues to rise in price with each new release, it’s nice to see the price of the Birthday Bourbon stay the same. Seeing as other limited releases this year, such as the Buffalo Trace Antique Collection, Four Roses 2016 Limited Edition Small Batch, and the Knob Creek 2001 Limited Editions all cost $10-$50 more, this bourbon now seems like a great value. You may not be happy with an $80 price tag, but compared to other releases this year, Brown-Forman is presenting consumers with a more than fair deal.

The Old Forester Birthday Bourbon series is the best example of what Brown-Forman is capable of and this year doesn’t disappoint.

Another year, and another candle gets added to the cake. While the series still hasn’t been able to get back to its glory days that it saw with the 2011 and 2012 editions, it nonetheless delivers a well rounded experience that should be enjoyable by all. The flavor profile stands apart from other special releases put out in the market this year offering consumers an experience that will reward them for tracking down a bottle. For those fortunate enough to find one on the shelf, make sure to crack this one open as it’s the best bourbon Brown-Forman offers.

Buy Old Forester 2016 Birthday Bourbon at Frootbat
‍The sample used for this review was provided to us at no cost courtesy its respective company. We thank them for allowing us to review it with no strings attached.
360 video 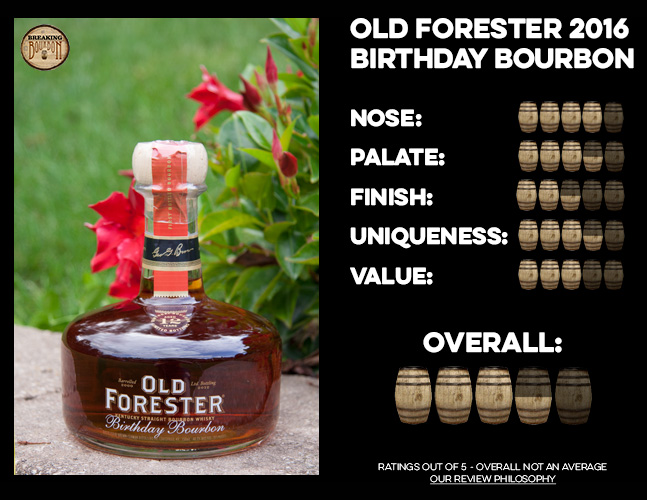 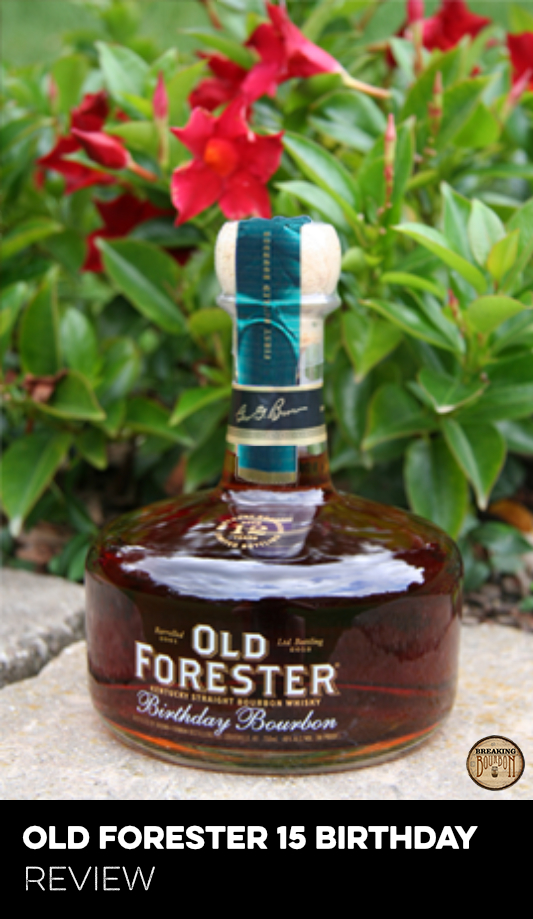