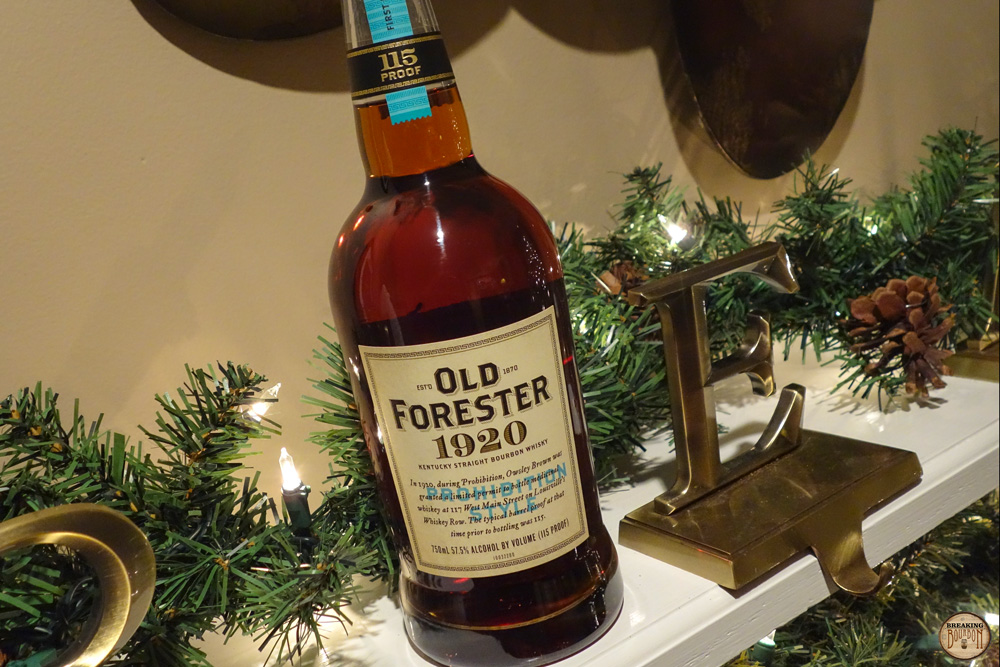 Old Forester 1920 Prohibition Style is the third expression in the Old Forester Whiskey Row Series. According to the neck tag on the bottle, “During Prohibition, only six Kentucky distilleries were granted permits to bottle bourbon for medicinal purposes. Brown-Forman, maker of Old Forester, secured Permit KY - 3. In 1920, the first bottles under this permit were produced.” It goes on to say “To match the usual barrel proof of the that bourbon after maturation, it is presented at 115 proof.”

The aroma is rich and powerful. Dark fruit, burnt brown sugar, chocolate, and a hint of bananas make up the components. Not surprising for the proof, it tingles the nostrils with a trace of ethanol. It’s a nice aroma overall, and can be easily described as a unique relative to other bourbons.

It’s big, bold, and immediately likeable. The richness of barrel char and dark chocolate play against the sweetness of caramel and creme brulee. There’s a nuttiness to it as well, along with some smokiness and a hint of coffee. The taste is reminiscent of some of the better Old Forester Birthday Bourbons I’ve had, but admittedly more pronounced and, to put it bluntly, better than I remember.

Allspice and black pepper pop initially. They quickly dissipate and leave a long-lingering finish without further introduction of new flavors, but a pleasing end to those introduced on the palate. Dark chocolate, barrel char, and that nuttiness are the most prominent. It’s a nice finish, plain and simple.

One of the first things that comes to mind with this bourbon is a likeness to a stout beer, no different than what I noticed in Old Forester’s 2013 Birthday Bourbon. That’s not to say it tastes like a beer, but where porters and stouts are often rich, chocolatey, dark beers, 1920 is a rich, chocolatey, dark bourbon. This characteristic is evident immediately. Not surprisingly, I prefer darker beers and also really enjoy this bourbon. It’s one of the few bourbons I’ve ever had that I took an instant liking to on my first sip.

While it presumably shares the same mashbill as the others in the Whiskey Row Series, it’s amazing how different it tastes. Sure the proof is higher, but inside we find an entirely different flavor profile. Brown-Forman provides little to go by as far as what might have contributed to this, other than barrel selection and masterful blending. Even by comparison with the Old Forester Birthday Bourbon Series, which can be enjoyable and echo similar flavor characteristics most likely due to the particular rickhouse and floor the barrels are pulled from, 1920 seems to stand out by offering better balance and an immediately enjoyable experience. I didn’t have to peel back layers to enjoy it.

The Whiskey Row Series is a premium line extension, and priced as such. Following suit with brands like Buffalo Trace’s E.H. Taylor lineup, it’s not surprising to see this type of premium line extension becoming more prominent. On one hand, we can say 1920 Prohibition Style is just the standard brand, same mashbill, just presented in upscale packaging and flavor profile. However, it’s important to acknowledge that whiskey makers control what they put in the bottle. In this increasingly competitive space, better distillation practices along with more careful barrel selection, blending, proofing, and other factors can lead to better final products in the end. It’s ultimately up to the consumers to decide whether it’s just a marketing play, or truly something more.

In this case, I’m fully behind the price tag, and excited for what Brown-Forman has done here. Like the others in the Whiskey Row Series, 1920 Prohibition Style introduces a complete new experience to the lineup, and it’s a good one. It’s more than just marketing, and whatever they did to curate this bourbon I can get behind. At $60, or even a little more in some markets, it’s just as good as many bourbons going for well in excess of $100. More importantly, it’s actually accessible.

1920 Prohibition Style made my Favorites of 2016 list not only because it’s good, but because it’s different. In one of my recent surveys, How do Bourbon Producers Solve the Limited Release Problem?, one of the ideas proposed was that producers simply make more of the good stuff. 1920 Prohibition Style may be an example of just that. Is 1920 just more carefully selected and blended stock, or is it contingent on a very limited supply of honey barrels? Time will tell, but based on the Whiskey Row line extension and availability it seems there will be enough to go around. Maybe producers “just making more of the good stuff” isn’t such a far-fetched idea after all.

Find Old Forester 1920 Prohibition Style Bourbon at Frootbat
‍The sample used for this review was provided to us at no cost courtesy its respective company. We thank them for allowing us to review it with no strings attached.
360 video 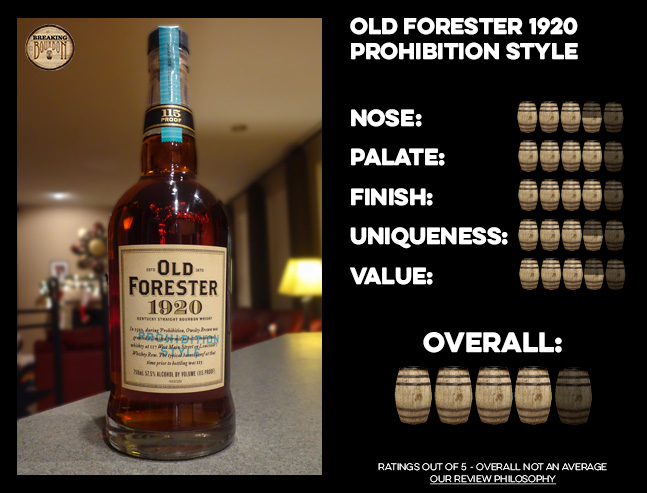 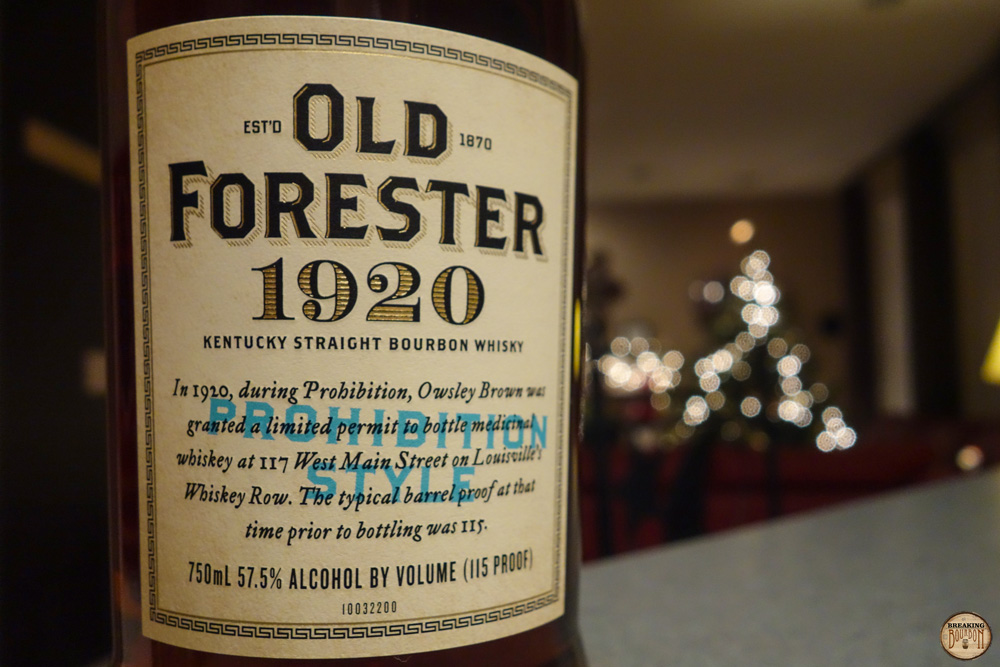 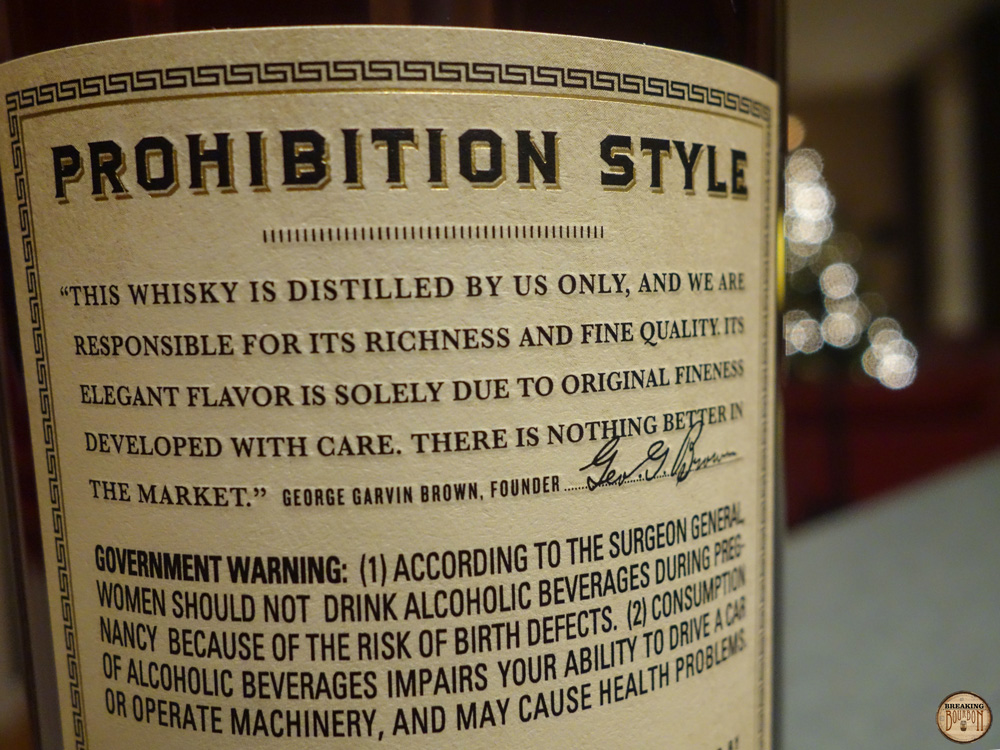 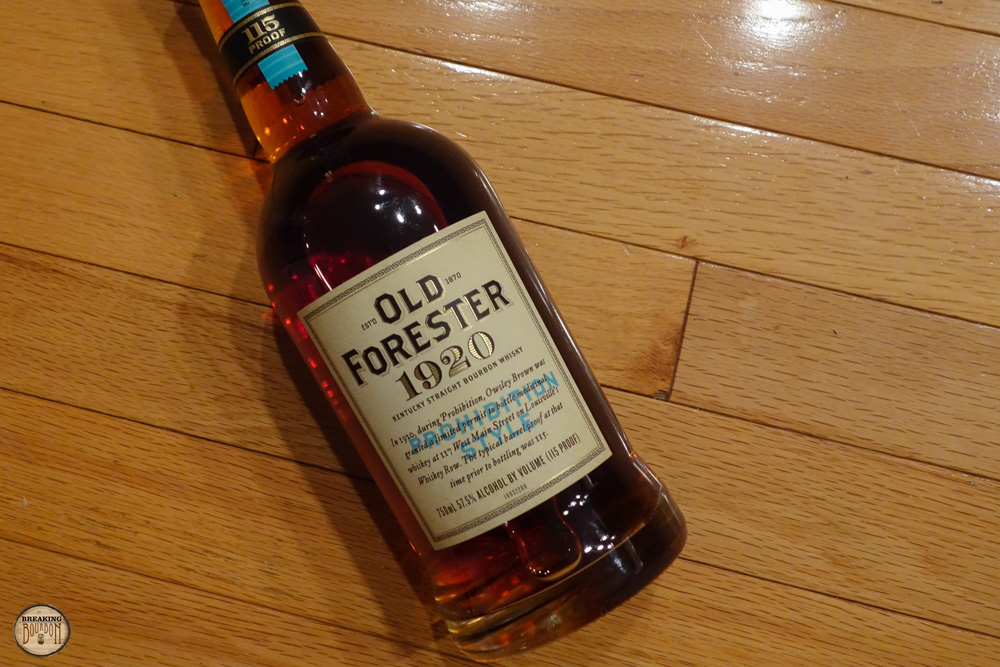