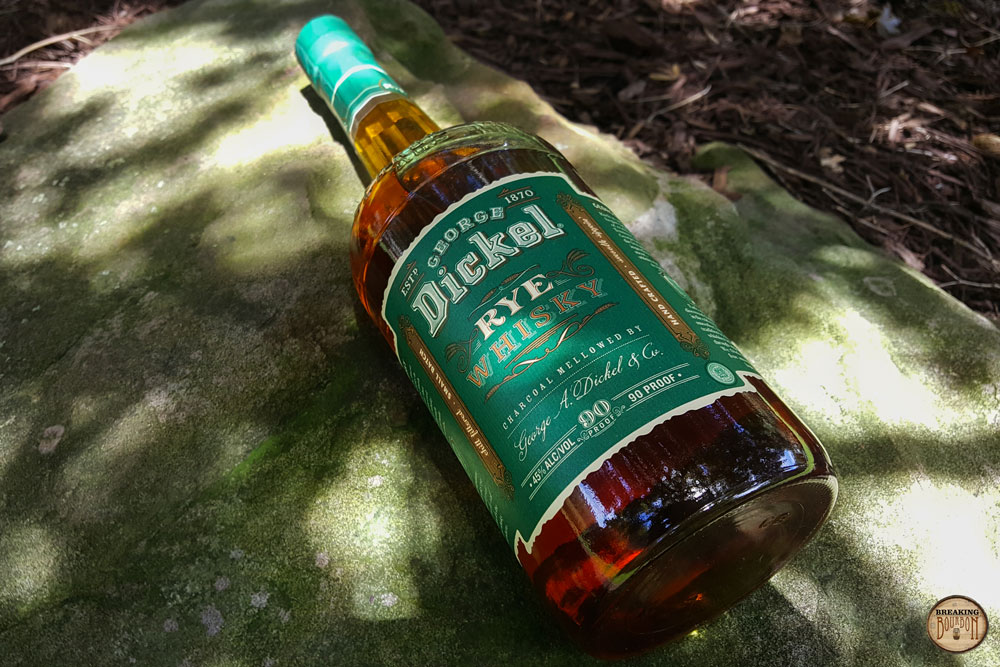 Age: NAS (Rumored to be around 5 years)

George Dickel is known for using only two mashbills. All four of their whiskeys consist of 84% corn, 8% rye, and 8% malted barley, while their single rye product consists of 95% rye and 5% malted barley. Interestingly enough, this rye is distilled by MGP that is chilled and filtered through charcoal made of sugar maple wood by George Dickel. It is aged in George Dickel warehouses in char #4 barrels with a #2 head. This is the same char level used for aging other Dickel whiskys.

A very approachable and inviting nose is instantly noticeable. Sweet notes of vanilla, marshmallow, lightly charred wood, fallen leaves, and a hint of grilled peaches. It’s a different combination, but one that works well. Surprisingly enough, the hints of rye grain that are present, aren’t as plentiful as I expected for a whiskey with a 95% rye mashbill.

Any misdirection the nose may have created that this wasn’t a high rye is instantly quashed in the palate. My mouth is flooded with a heavy dose of creamy spiced rye grain. The palate has a familiar MGP flavor profile, however it’s clear that the Dickel charcoal filtering process has left its mark. Sweet vanilla and marshmallow follow the rye spice and combine to make for one very enjoyable palate. It’s not complex, but its delightful creamy profile makes it extremely easy to sip on.

The rye carries through to the finish and is consistent throughout. After a few moments, light hints of white pepper, oak, and leather subtly enter the picture and then subtly exit a few moments later leaving a dry rye characteristic to chew on for several minutes. The finish contains little to no heat and continues on the trend found in the palate of making this extremely easy to drink.

Similar to Rittenhouse Rye Bottled in Bond, I found Dickel Rye to be extremely approachable, but in a slightly different way. Where Rittenhouse is easy to recommend for its ability to help bridge a typical bourbon drinker into the world of rye due to its sweeter characteristics, I feel that Dickel Rye is the next logical evolution as individuals explore the world of ryes. You still have an approachable nose that is unique, yet also inviting to bourbon drinkers. This is followed by a palate and finish that deliver a more traditional rye experience thanks to its 95% rye content. While classic rye characteristics are present in the palate and finish, there is no doubt that the unique Dickel charcoal filtering process has left its mark. The end result is a rye that forgoes exotic flavors and sticks to ones that are straightforward and easy to dissect. The 90 proof is perfectly balanced and allows the flavors to nicely shine through with very little heat being present. This is truly the definition of an easy sipping rye.

Lately it seems to get harder and harder to find an approachable whiskey for under $25. Sure more whiskeys than ever are appearing on the shelf, but many of these are young or sacrifice quality for price. Dickel not only comes in at a reasonable price, but it also delivers a whiskey with a high rye content that isn’t seen among its peers at this price point.

Much like I found Rittenhouse Rye to be a good value, I feel Dickel Rye falls right in the same camp. It still may not present the spiciest of profiles that hardcore rye drinkers crave, however it delivers an extremely approachable sipping rye, all for $25 or less. That’s hard to beat in today’s market.

Able to be appreciated by both new and veteran whiskey drinkers, George Dickel Rye delivers an enjoyable experience at a fantastic price.

There’s not much to hate about Dickel’s sole rye whiskey. Sure it may not be the most complex rye you’ll ever sip on, but it will deliver a sip that you want to keep going back to. In fact I found myself going back more and more than I usually do when I review a whiskey. For years I used to pass this on the shelf thinking that I’ll get to it eventually, or telling myself how good can this be for $25. I now wholeheartedly regret that mindset, because this is one rye that you’ll be hard pressed not to like.

Find George Dickel Rye Whisky at Frootbat
‍The sample used for this review was provided to us at no cost courtesy its respective company. We thank them for allowing us to review it with no strings attached.
360 video 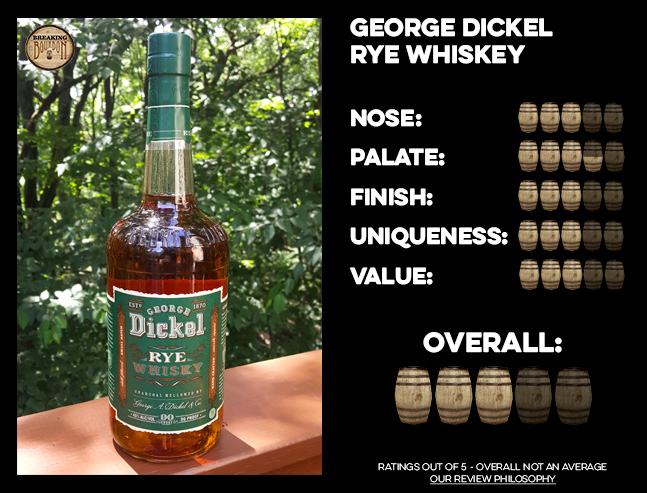 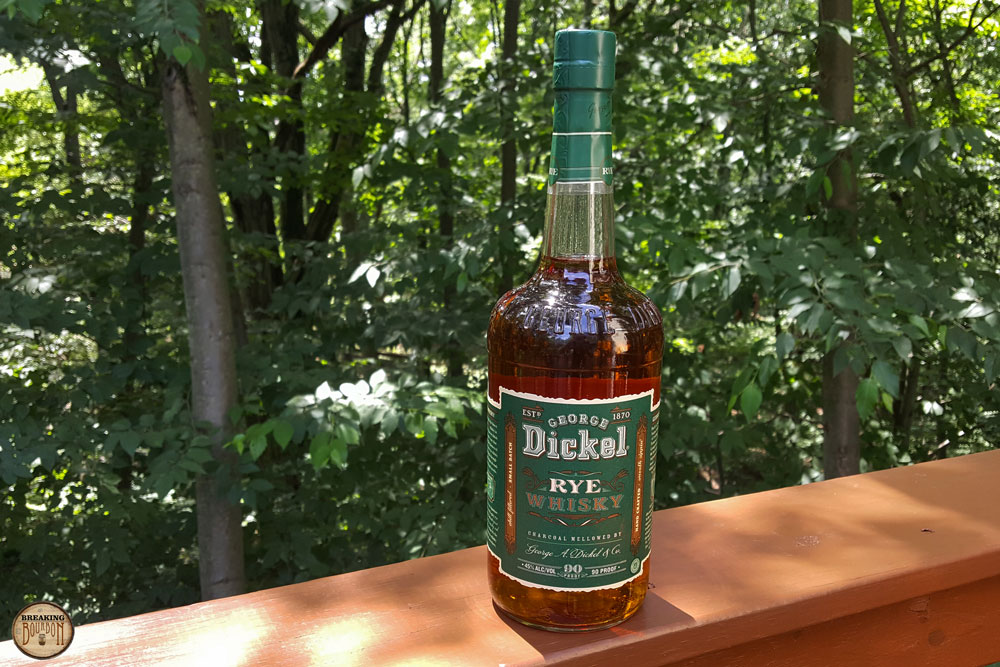 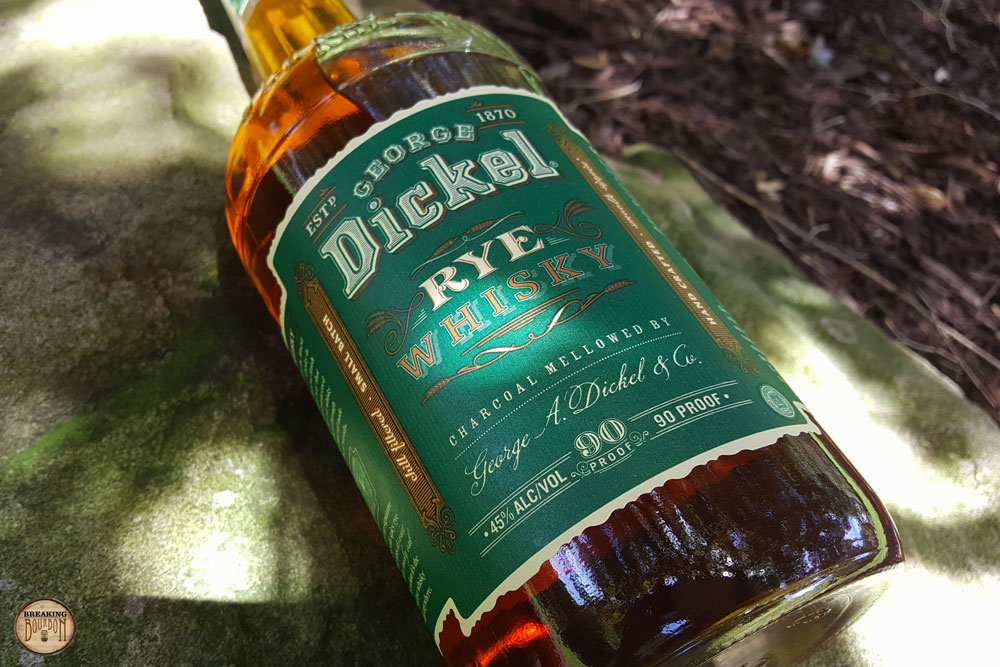 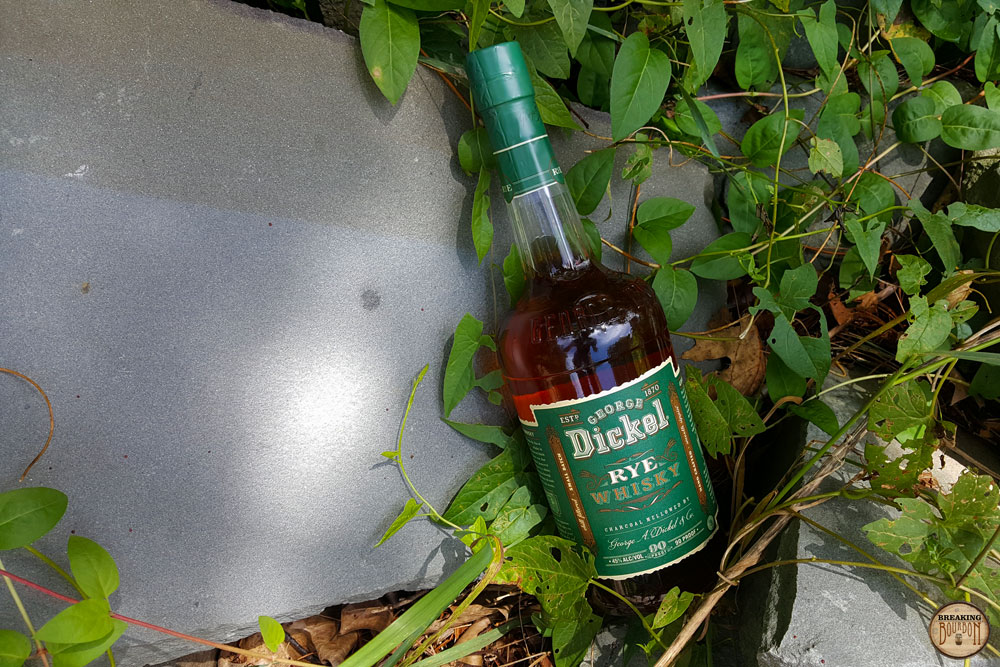