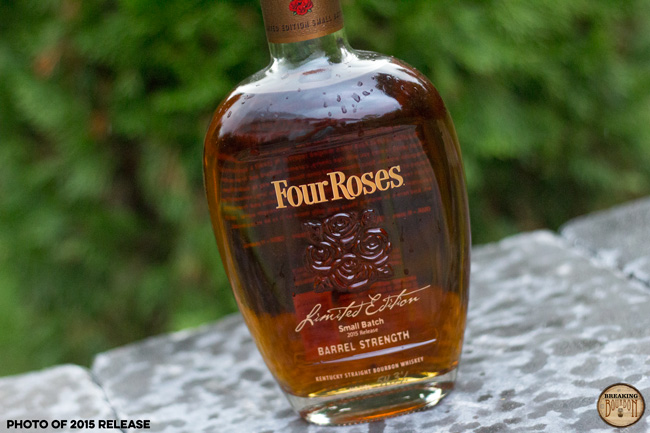 Age: Blend of Three Bourbons with a Minimum 12 Years (two 12 year-olds and one 16 year-old)

According to Elliott, the OESO bourbon within the blend was selected as the anchor for this year’s Limited Edition Small Batch. The recipe’s fruitiness was then balanced with more age and spice from the additional OBSV and OESK recipes selected for the batch. It is the first time in over seven years that the OESO recipe has appeared in a Limited Edition Small Batch. (The standard Four Roses Small Batch is a blend of four different recipes - OBSK, OESK, OBSO, and OESO and bottled at 90 proof.)

This year’s Limited Edition Small Batch is bottled at barrel strength with 9,258 hand-numbered bottles to be released in the United States beginning in mid-September.

Hints of aged oak mingle with summer fruits, honey, and caramel. It’s quite easy on the nose considering the proof. While pleasant, it’s easily forgotten.

A tidal wave of flavor bursts forth, coating my mouth with a rich, velvety feel. Summer fruits provide the base of flavor, with seasoned oak, caramel, rye spice, and a bit of honey balancing things out. The delicious combination of flavors with its fruit-forward base is oddly unique, yet familiar and traditional at the same time.

The finish is really where this bourbon shines. Seasoned oak slowly overtakes the summer fruits, caramel, and honey but allows their sweetness to remain. It lasts and lasts with hints of rye spice and burnt brown sugar appearing later, adding a satisfying layer of dimension. It’s exceptional and leaves a memorable impact.

Elliott’s background is in chemistry and his former role with Four Roses was in quality control. While Four Roses has mastered consistency with their standard bourbon lineup, their Limited Edition releases deviate from simply matching already established flavor profiles as they strive to seek out something both exceptional and unique representing the best the distillery has to offer. As Elliott says in reference to Limited Edition Small Batch creation, “I’m not really satisfied until it consistently, in my opinion, is as good or better than previous releases.” Arguably, this weights individual taste preference much more heavily in the equation, presenting both the opportunity for success along with a greater risk of failure.

While it’s generally of similar quality to other highly sought after limited releases, anecdotally speaking Four Roses Limited Edition Small Batch has not experienced the level of “frenzy” as others in the category, including most in the Buffalo Trace Antique Collection and Pappy Van Winkle lineups. The MSRP on Limited Edition Small Batch has climbed rapidly in just a few years, from around $85 in 2013 to $129 in 2016, though actual price will vary a bit by state and some retailers will certainly mark that up. Keeping in mind that this is still going to be difficult to find near MSRP, those who put in the time might find the opportunity to purchase at retail more easily than other highly revered limited editions in the category.

Considering the quality of this vintage and what is happening in the greater bourbon marketplace right now, $129 is a fair price. This is worth your consideration if faced with a choice amongst other limited edition releases this year, especially considering the generally disappointing Buffalo Trace Antique Collection and Knob Creek 2001 Limited Edition lineups.

Four Roses 2016 Limited Edition Small Batch is a memorable bourbon worthy of both the asking price and the hunt you’ll have to engage in to find it.

Premium and limited edition bourbons continue to be released in growing numbers, growing price tags, and increasingly mediocre quality. Four Roses is a distillery known for consistency and quality, however I have not tasted or deeply evaluated every Limited Edition Small Batch release to date. With that in mind, I may be in the minority as I have typically found the annual Limited Edition Small Batch to be of high quality but not overly exciting, despite high ratings from many reviewers. The 2016 vintage stands out as the best Limited Edition Small Batch bourbon from Four Roses that I’ve tasted, holding company with other highly regarded bourbons and providing a memorable experience. This year’s release is absolutely worth seeking out.

The sample used for this review was provided at no cost courtesy of The Baddish Group on behalf of Four Roses. We thank them for allowing us to review it with no strings attached.

Find Four Roses 2016 Limited Edition Small Batch at Frootbat
‍The sample used for this review was provided to us at no cost courtesy its respective company. We thank them for allowing us to review it with no strings attached.
360 video 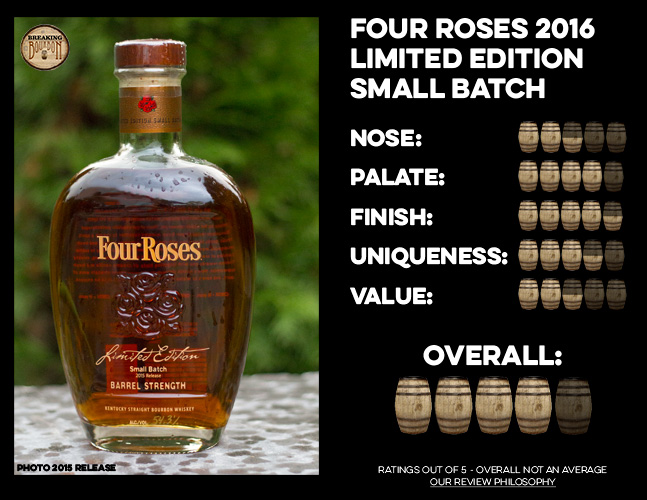 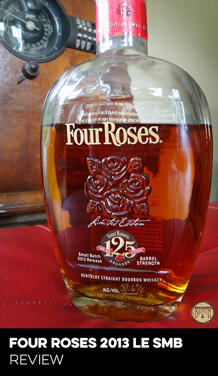