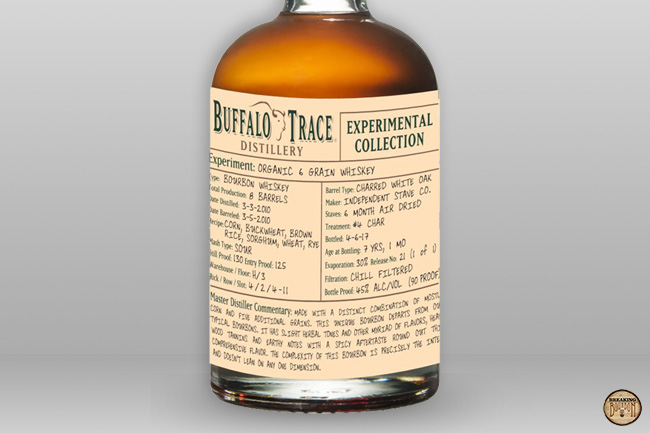 Organic Six Grain Whiskey was distilled in early May 2010, and its mashbill contains a blend of corn, buckwheat, brown rice, sorghum, wheat, and rice. According to Buffalo Trace, this is a certified organic whiskey. All six grains received organic certification, including their production method of distillation, processing, and bottling. This whiskey consists of six grains and meets all of the requirements to be called bourbon. It’s made with at least 51% corn, with the other five grains comprising the rest of the mashbill.  However Buffalo Trace chose to refer to it as whiskey in name because it has a flavor profile that is different than the typical bourbons produced at the distillery.

Based on the data provided by Buffalo Trace, we estimate a total of 4,328 375 ml bottles comprise this limited release.

A somewhat peculiar mix of aromas that are light and airy, but still have a commanding sense about them. Herbal tones, butterscotch, and oak mingle with gentle notes of grain and rice. This mix produces a rather enjoyable aroma that is quite unique coming from a whiskey.

An earthy mix that weighs heavily on grain notes. There are moments when butterscotch and vanilla pop, but they quickly fade. Pine, wheat, maltiness, herbal tea, and apricot are also present, but the majority of these flavors are hard to discern as they are mostly muddled together.

The whiskey ends on a bit of an odd note. There’s a predominant aftertaste that is reminiscent of wood tannins, but it doesn't come off like it usually does. It most likely has to do with the number of grains involved here. There is also a small fiery blast in the finish that quickly dissipates. It’s more interesting than bad, more captivating than good.

This is the second release from Buffalo Trace in two months sporting an above-average number of grains in the mashbill. In my E.H. Taylor Four Grain review, I spoke of a lack of a benchmark when reviewing a product like this. With two such releases so close together, some interesting comparisons can be made between them. Where E.H. Taylor Four Grain was sweeter and its intensity more pitch-perfect, Organic Six Grain is a little more wild in nature. Its six grain mashbill makes for a more challenging understanding of its flavor complexity. It's actually a bit hard to pull out many specific flavors due to the whirlwind of those that are present. The whiskey is by no means offensive, just excessively unique. Scotch drinkers may be used to a wildly different tasting whiskey like this, but in the bourbon world, Organic Six Grain will probably come off as bizarre.

Buffalo Trace’s Experimental Collection has never been highly sought after by the masses. With small release numbers, 375ml bottles, limited marketing, and characteristics that appear to some as gimmicks, they aren’t on consumers' radar like some of the the company’s other releases. There must be something about experiential releases that makes consumers pause, since other companies that release similar products in the form of “master collections” or “experimental cask finishes” receive similar lukewarm responses.

That has slowly been changing. Buffalo Trace has also been doing a better job promoting their Warehouse X aging warehouse and their Experimental Collection releases. With many recent bourbon releases lacking a spark of uniqueness, it seems more eyes are beginning to turn to these “experimental” releases. The problem with “experimental” is that it can also mean taking a big, fat chance. There's little in the way of a guarantee with any release, even less so with a release like this.

Organic Six Grain isn’t too far off from E.H. Taylor Four Grain, yet it was released as part of the Experimental Collection and not as part of one of Buffalo Trace’s major brands. E.H. Four Grain was unique tasting, but still within the bourbon flavor wheelhouse to warrant a release as part of the Taylor brand at a respectable $70 asking price. Organic Six Grain at $46 for a 375ml bottle is asking a lot on paper, but there is something about half bottles that makes it a little easier to swallow. If this was sold in 750ml bottles at $92, it would be easy to overlook this release. Unique whiskeys benefit greatly when packaged in half size bottles. This might be something you’ll want to visit from time to time and is actually packaged and priced accordingly.

If odd, wild, or bizarre is how you like your whiskey, you’ve come to the right place.

There is a lot packed into one mashbill here, and being unfamiliar with many of the grains involved doesn't help matters. This is easily one of the more unique whiskey on the market from a major Kentucky distillery. Where I thought E.H. Taylor Four Grain was an admirable first edition that still had room to improve, but was worth its asking price, Organic Six Grain leans more on pure uniqueness than easy-to-love qualities. The price may sting some, but there’s little else in the bourbon market that tastes like it and for some, that might be good enough. Love or hate these types of release, the fact they bring something special to the table should always be celebrated.

The sample used for this review was provided at no cost courtesy of Buffalo Trace. We thank them for allowing us to review it with no strings attached.

Buy Buffalo Trace Organic Six Grain Whiskey at Frootbat
‍The sample used for this review was provided to us at no cost courtesy its respective company. We thank them for allowing us to review it with no strings attached.
360 video 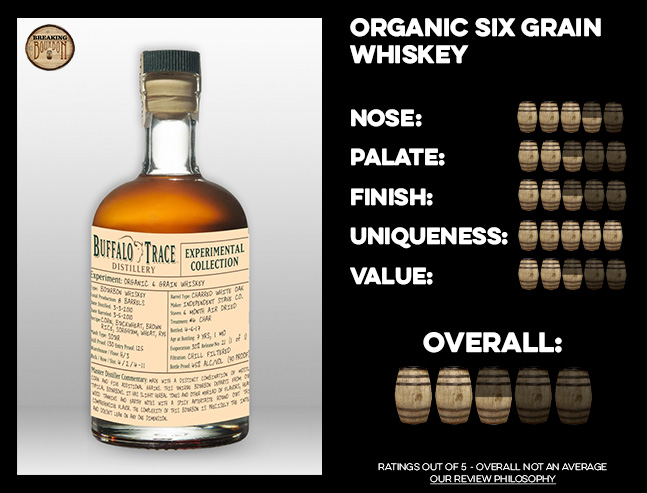