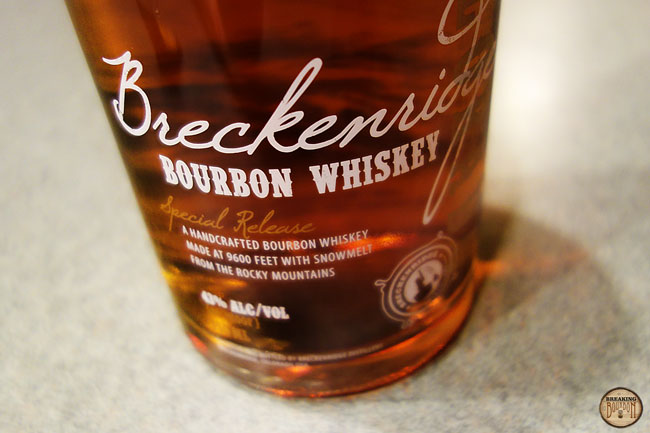 Age: Per the bottle - “Aged for a minimum of 2 years in charred new American oak barrels.” Per the company’s website - “The average age at bottling is 2-3 years.” Per an interview with Master Distiller Jordan Via - “After the first release it has always been at least 3 years old.”

Master Distiller Jordan Via says the water the distillery uses is the key. It’s Breckenridge’s municipal water supply, which is essentially fresh snowmelt, and is said to be naturally rich in minerals. Breckenridge is located 9,600 feet above sea level nestled in Colorado’s Rocky Mountains.

Cinnamon, rye spice, oak, and vanilla with just the right amount of burn.

Rye spice, cinnamon, and pepper contrast with oak, vanilla, and honey. It’s a nice balance. It looks thin in the glass, however the flavor is fuller than would be expected considering the proof.

Medium length with just the right amount of burn. The flavors really taper off nicely and it leaves a wonderful aftertaste. It feels more like a 90+ proof sip than 86, which is a good thing in this case.

When it comes down to the sip, nothing screams unique with this bourbon. It’s no-gimmick, traditional, yet well rounded flavor is something you’d have difficulty picking out in a blind taste test. Their story is somewhat compelling, as the distillery claims to use mineral-rich snowmelt as it’s not-so-secret secret ingredient. And then there’s its young 2-3 year age which you’d never guess based on taste alone. Ultimately this is a premium quality, traditional *yet very good* tasting bourbon that can be produced more quickly than you’d expect.

Craft distillery bourbons span a wide range of quality, from amazingly unique gems down to corny, grassy, not-aged-quite-enough garbage. Some are like nothing you’ve ever tasted, while others fall short of anything you’d want to drink again. Unfortunately the quality is rarely reflected in price, as these smaller distilleries typically have to sell at a premium to make their nut. Often times we’re paying for the experience and story behind the bottle as much as the spirit inside it. $50 for a craft-distilled 750ml bottle is acceptable, regardless of the quality or age of the juice within the bottle. Breckenridge manages to pull of something miraculous giving us a smooth, well-rounded, easy sipper that’s worth the $43 they sell it for. It beats the pants off Rhetoric, which is more than double the price.

A great-tasting bourbon with widespread appeal that’s wise beyond its years.

I almost wanted to hate this bourbon. For some reason, when I see a bourbon covered in awards I tend to think “gimmick.” As far as I’m concerned I don’t give a crap what awards it won at what spirits competition. Despite my personal opinion on this, their marketing has worked well because they’ve managed to move past their local barriers and break into the mainstream with widespread distribution. Furthermore, whatever marketing and behind-the-scenes growth magic is going on doesn’t change the fact that the widespread distribution is backed by a solid bourbon that has mass appeal. I wondered how a craft distillery in the little town of Breckenridge could be producing so much bourbon, and I think I stumbled onto an answer. According to discussions online, it’s been said that Breckenridge does some distillation onsite and then outsources the overflow to another distillery or distilleries. The ingredients are the same and the process is controlled by their specifications, of course. I’m also curious on how it’s being aged, if there are any additional factors at play here. I emailed the company about this but have yet to hear back on a reply. It’s all the same to me, but I’d really like to know more about how this wonderful bourbon is coming together in such a short time.

Breckenridge was kind enough to respond to my email inquiry - "Yes, we are outsourcing a portion of the bourbon that ends up in the bottle. The other portion is mashed, fermented, distilled, aged, proofed, and blended in house. Once we get our new still in (prob in September) we'll be able to catch up with demand and transition to everything in the bottle being made in house. As for who we are partnering with for distillation, that is proprietary, sorry!" I'm certainly looking forward to more to come from this distillery as we continue to watch them grow.

Buy Breckenridge Bourbon at Frootbat
‍The sample used for this review was provided to us at no cost courtesy its respective company. We thank them for allowing us to review it with no strings attached.
360 video 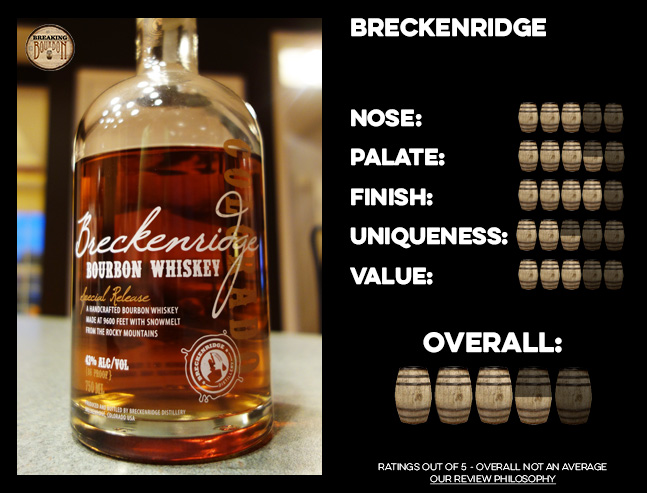 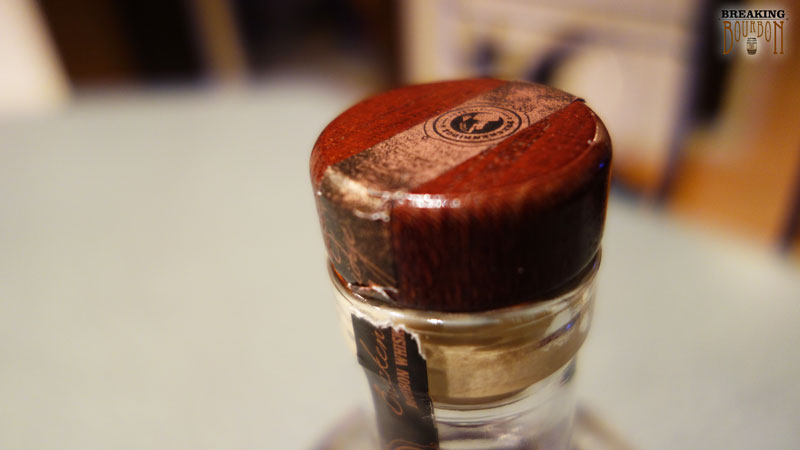