A sweet blend of raisin, caramel, and orange coat the mouth with a soft but full amount of flavor. A little spice on the back end balances the initial sweetness. A floral hint is noticeable, but not so much so that it takes away from tasting like a true “bourbon.”

As the spice on the back end of the palate fades away, burnt sugars, caramel, and vanilla take over. This is just as pleasant as the rest of the sip and lasts a little longer than most bourbons.

Blanton’s claims to be the first and original single barrel bourbon dating back to 1984. Whether or not that’s true really doesn’t matter at this point as there are plenty of quality single barrel offerings: Colonel E.H.Taylor, Four Roses, and Eagle Rare, to name a few. There is, however, something notably different about Blanton’s flavor that makes it distinct; it’s just hard to put your finger on it.

It may just be my personal preference, but I think this is incredibly delicious bourbon and a steal at $45. There is a lot of personal preference built into that recommendation though, as it just doesn’t stand up to the two tests on paper - age and accessibility. There is no age statement on the bottle, but I’ve read 8 years is the ballpark for most. That being said, Thomas Handy is 6 years aged and flies off the shelves at $70. It’s also easily accessible. That could change, however, as demand continues to heat up. If this does become more difficult to get your hands on I have a feeling people will be scrambling to get a bottle. Entering into the $50 range also brings some steep competition: Russell’s Reserve Single Barrel, Knob Creek Single Barrel, Four Roses Single Barrel, Van Winkle Special Reserve (12 year Lot B), and so on. I think this is one you will just have to try for yourself. If you love it as I do, you’ll find the price to be more than fair.

Refined and delicious, but nothing special on paper. I avoided this bourbon for the longest time just simply based on the look of the bottle. I thought it was kind of gimmicky. It also looks smaller than the other 750 ml bottles, making it appear overpriced. All of that changed after I bought my first bottle and, ironically, it has become one of my favorite bottle designs. I think it’s possible that others have made the same assumptions as I had, always seeing Blanton’s on the shelf, often accumulating dust, and passing it by simply because of its “look.” Let it be known, this stuff is the real deal. For that reason, it may not always be as easy to come by as it is today.

Buy Blanton's Single Barrel at Frootbat
‍The sample used for this review was provided to us at no cost courtesy its respective company. We thank them for allowing us to review it with no strings attached.
360 video 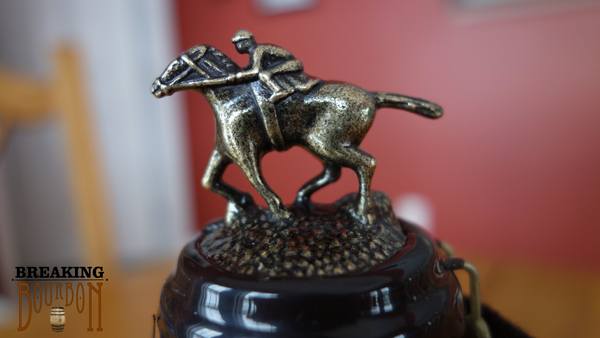