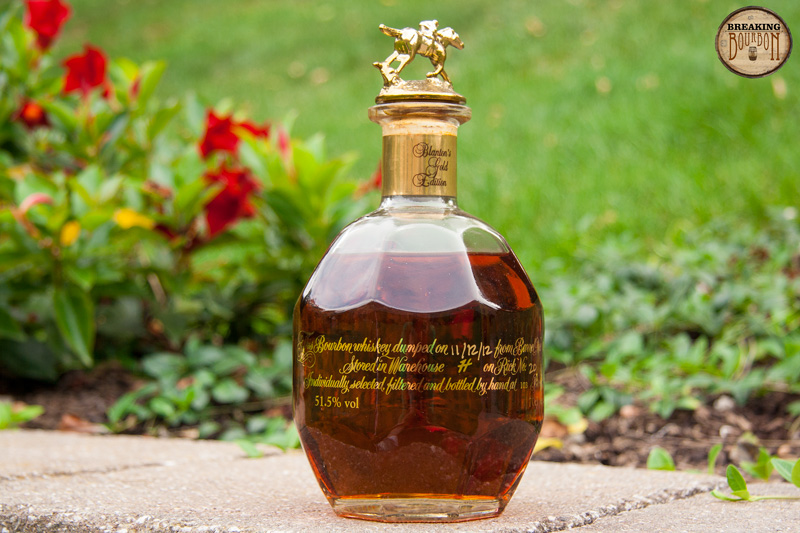 This barrel of Blanton’s Gold Edition was dumped on 11-12-12 from Barrel No. 118. It was stored in Warehouse H on Rick No. 20. The registered Bottle No. is 176. It is currently only offered in international markets and in some domestic duty free stores. This bourbon was bottled specially for sale in the U.K. and is only sold in 700ml bottles.

In a word, delicious. Raisins, dried fruit, citrus, and fresh hay shine through. This higher proof version of Blanton’s contains a slight increase in the noticeable alcohol scent on the nose versus the Original Single Barrel Blanton’s, while still offering a delicious refined smelling bourbon. It’s amazing how much of a difference an increase in 10 proof points makes in rounding out a fuller bodied nose.

The palate on the Gold Edition offers a great mouthfeel and a subtle flavor profile.  Drier than I expected based on my experience with the other bottles in the Blanton’s line up, it’s marked with hints of vanilla, honey, toffee, tobacco, dried fruit, and pepper. The extra proof is more noticeable in the Gold Edition specifically with its pepper profile, which starts as a subtle spicy burn on the back end of the palate and roars up in the finish.

A lingering spice defines this bold finish. A pleasant slow burn engulfs your mouth and builds up heat as it slowly travels down your throat with each sip. Within that burn you have flavors of subtle rye, charred aged wood, leather, and honey. A dry heat stays in your mouth for a noticeable time and really prolongs the finish. I was able to “chew” on this finish for several minutes and was really able to appreciate its flavor characteristics.

Blanton’s Gold Edition is only sold to select non-U.S. markets. At 103 proof, Blanton’s Gold Edition comes in 10 proof points higher than Blanton’s Original Single Barrel that you can buy in the U.S., which is sold at 93 proof. If you enjoy Blanton’s Original Single Barrel, this is one of two opportunities to try a higher proofed version from the distillery, the other being Blanton’s Straight from the Barrel. It’s one of the few products on the market that allows you to do a side by side comparison of a brand at multiple proof points. I wish more products would do this as it allows consumers to buy the version that’s best suited for their preferred proof range.

The Gold Edition allows you to taste Blanton’s at a proof that offers full flavor without overpowering you from the increased alcohol. It’s interesting to see what just a slight increase in proof can do to really bring out the flavor profile of the Blanton’s brand. Really a shame that they make consumers go out of their way to try it, because I find the bolder flavor profile to be more well rounded than what you currently see in other Buffalo Trace single barrel products.

A slightly more “grown-up” version of Blanton’s Original Single Barrel that builds off of all the great qualities and then some, while unfortunately selling at a more grown-up price point.

This is a pretty consistent bourbon across the board when it comes to flavor profile. The nose, palate, and finish all are very pleasing and this bourbon delivers a great sip from start to finish. The Gold Edition is a slightly spunkier version of Blanton’s Original Single Barrel in the sense that it offers the same great nose, a little drier mouthfeel, and a little more burn in the finish.

Additionally, the Gold Edition is a really fun opportunity to taste a higher proof version of a beloved single barrel that you won’t often get the opportunity to have, however it comes with a hefty price tag. I actually prefer the Gold Edition over the Original version, and it’s a shame that this isn’t sold in the U.S. at slightly higher price than Blanton’s Original Single Barrel. If it were, I could see this being popular as many Blanton’s fans would gladly pay for the opportunity to try a slightly “grown-up” version of a beloved bourbon. That being said I’m not sure how many would go back for a second bottle due to the fact that while it’s slightly better, I’d be willing to bet many would be hard pressed to pick one bottle of Gold over almost two bottles of Blanton’s Original Single Barrel

The sample used for this review was provided at no cost courtesy of its respective company. We thank them for allowing us to review it with no strings attached.
360 video 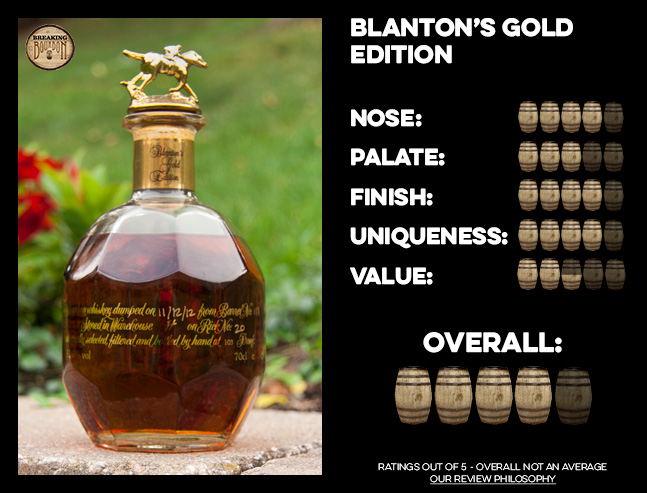 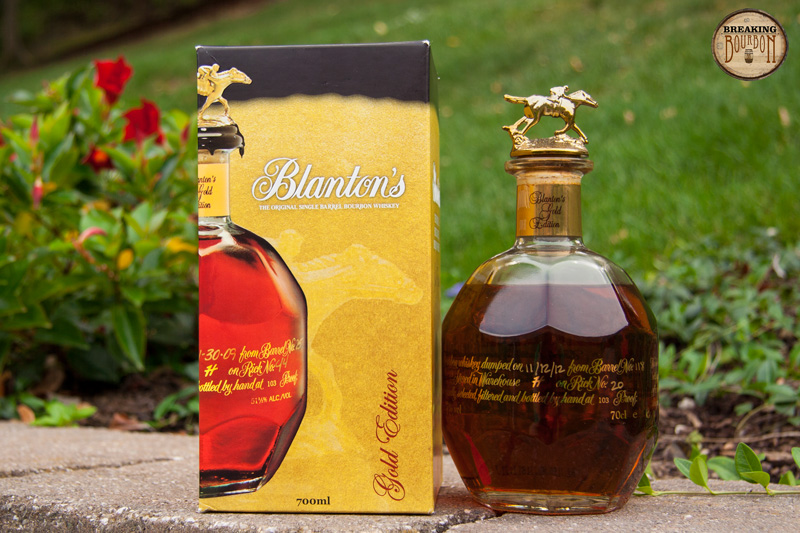 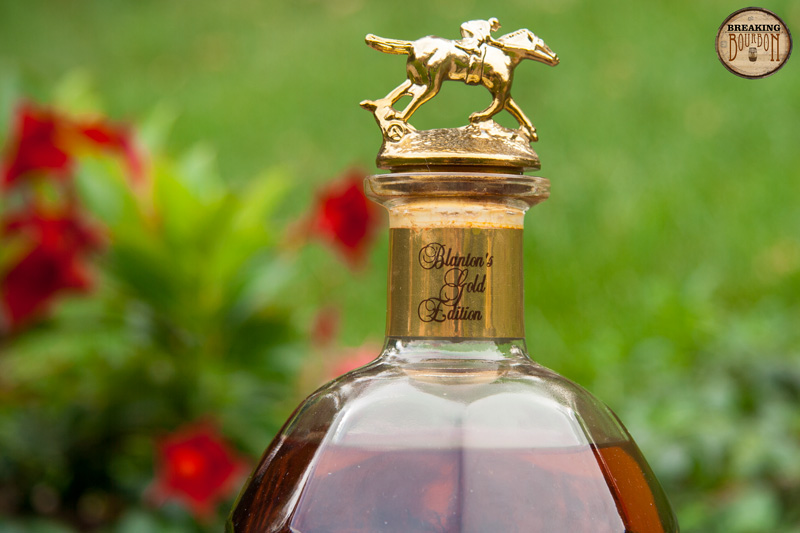 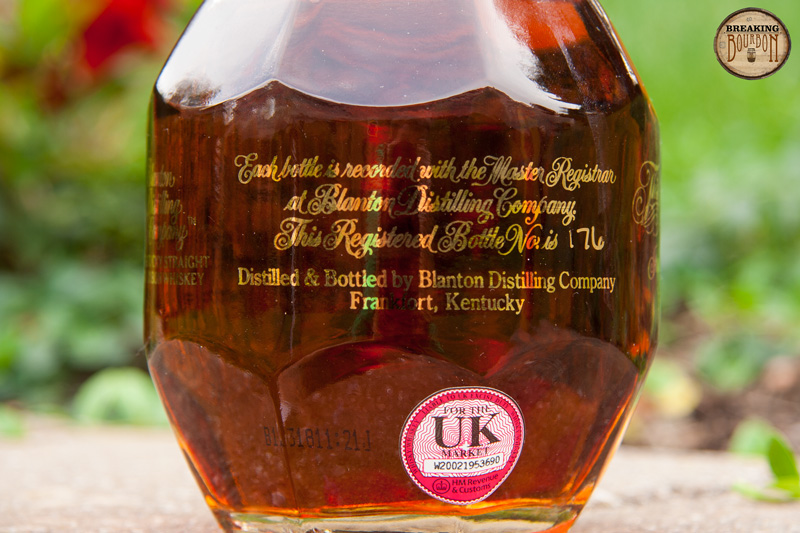 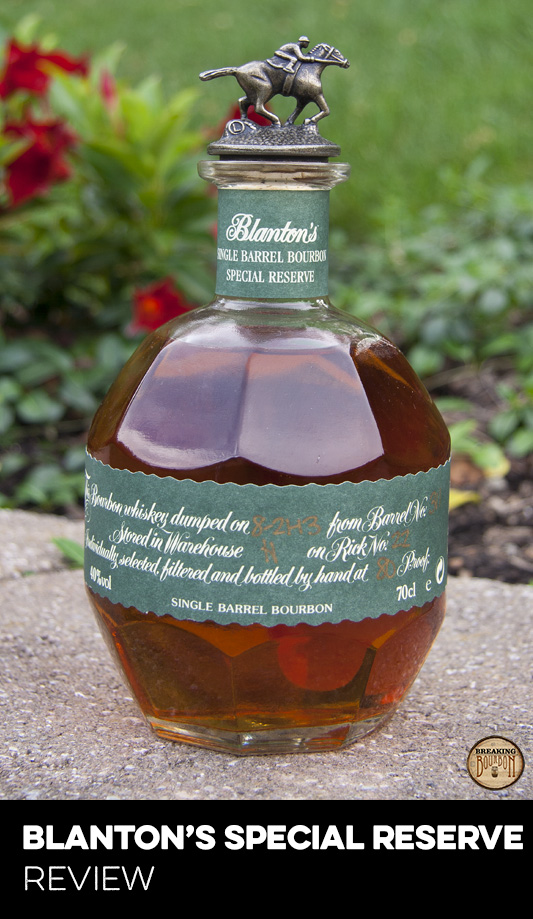