A decade after the Meyer Grelli family founded the City’s first Distillery since Prohibition, they are unveiling a major expansion that will more then double the size of their Distillery in Pittsburgh’s Strip District. The expanded site features a new restaurant, bar, retail bottle shop, dedicated tour and event spaces and interactive historical vignettes through out the space.

“This represents a huge step forward for Wigle,” says Meredith Meyer Grelli, Co-Owner of Wigle Whiskey. “When we first built out the Distillery space in the Strip District, it was not yet legal to sample and sell craft spirits to consumers. As we built out the Distillery, we were also lobbying the state of Pennsylvania to change the law to allow us to operate. There was significant risk and we had no plan B. We wanted to operate in the most conservative amount of space possible.”

The Wigle team has operated in a tight 3,500 square feet for the past decade.

“What this means on the ground is, every space has had to serve multiple purposes, no one has dedicated work space and we’ve had to curtail both programming and production as our growth has butted up against our space constraints.”

As rents continued to rise in the Strip District, Wigleowners also became increasingly anxious about their future in the neighborhood.After years of conversations with their landlord, Wigle was able to purchase their distillery building and the building next door.

The industry has changed dramatically in the past decade since the Wigle owners established the Distillery. “For the first 3 years of the Distillery, we had no staff members and a very limited cocktail program.Guests rightly expect a fuller experience now, including a full food menu, elevated cocktail program and beautiful surroundings. We also are thrilled to improve the quality of our tour environment. Our tours are one of the keystone experiences at Wigle and a bucket list Pittsburgh item for locals and tourists,who are drawn to Wigle for our ability to tell regional stories through high quality craft spirits. Tour guests will now have dedicated, air conditioned seated tasting space that is separate from the production space.”

The Distillery’s new kitchen will be run by Executive Chef Dan Okren, who has a history at both Wigle and Big Burrito. He was most recently Sous Chef at Eleven. In 2018, after years cooking at Casbah and Superior Motors, Okren took a distilling sojourn at Wigle--taking a year off of kitchens to learn to make whiskey. He returned to Big Burrito as Sous Chef at Eleven when he saw an announcement that Wigle would be working on a restaurant.

“I am thankful for the opportunity to blend my love of cooking with my passion for craft spirits.” says Okren. “Wigle’s goal of providing a unique and local experience for locals and visitors to our region is something that I am extremely excited to be a part of.”

The space also brimming with interactive and instagrammable vignettes that tell the story of Pittsburgh whiskey, including whiskey turned steel moguls, Henry Clay Frick and Andrew Mellon, as well as of course the Whiskey Rebellion. Guests are also able to walk through a history of Pre-prohibition whiskey timeline.

The bar will be managed by Adam Santichen who recently moved from Press Bistro in Erie for the opportunity.

The folks at Wigle also took the opportunity, while the walls were down at the Distillery, to stash some of their own Monongahela Rye in behind the drywall with a note:

“To the unsinkable Pittsburghers of the future; those of the past send greetings. P.S. if you’re tearing down these walls to turn our beloved distillery into condos, hopefully we’re dead.” 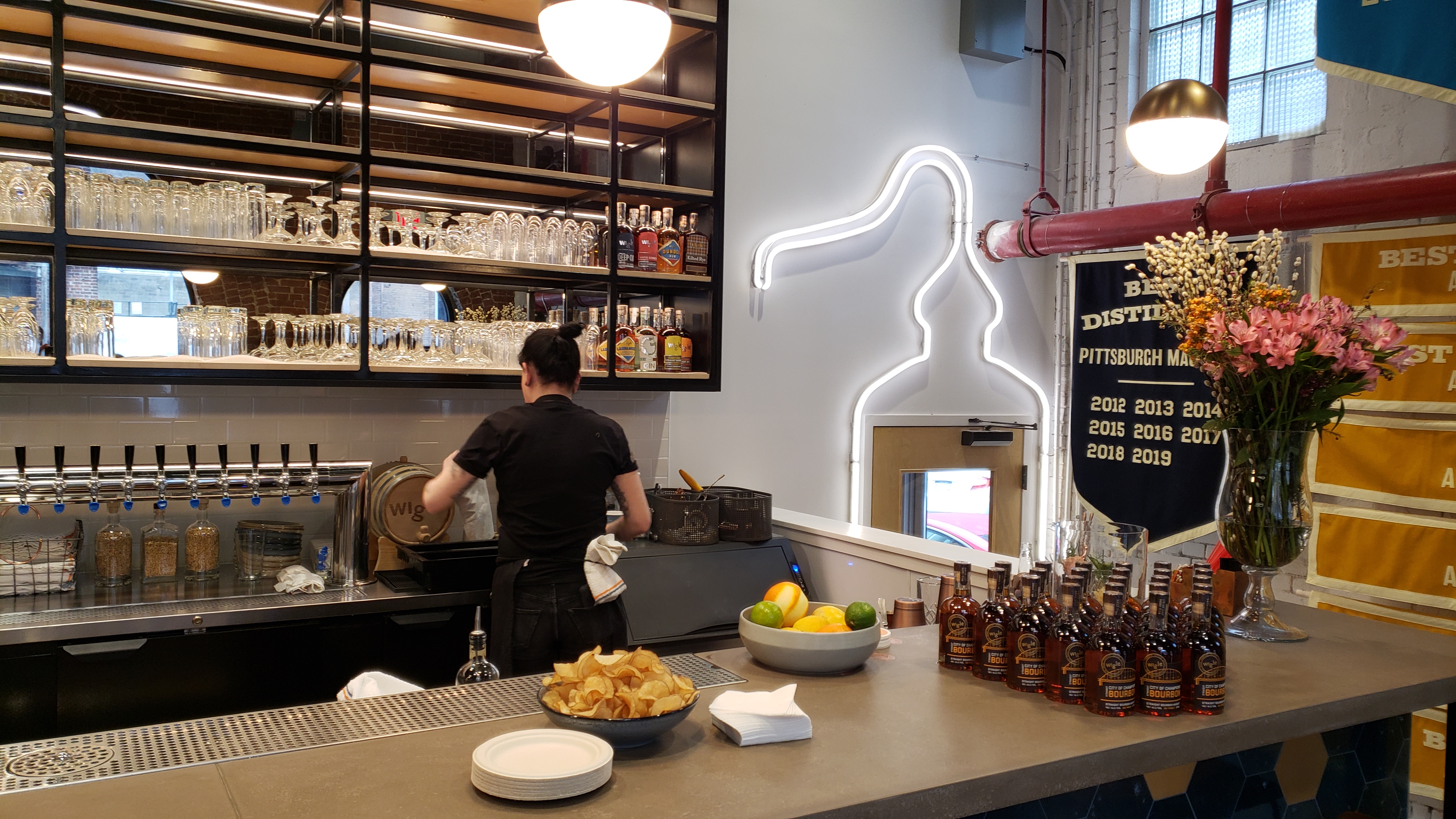